You need to move quickly if you want a new car

As we stand on the cusp of a deep global recession, it's hard to imagine that if you want to buy a new car, you need to crack on with it in order to both get to the front of what will be a lengthy queue and to beat almost certain price rises.

That, however, is the reality of the situation, and if you're looking to be part of the race, the bad news is that the starting gun has already fired, the hammer hitting the primer when the government confirmed last week that dealerships can sell cars online and deliver new vehicles so long as they obey all social distancing rules.

In some regards, the statement was non-news: manufacturers operating online sales channels had never closed them, while some (but far from all) retailers had kept a handful of staff off furlough to do the same. Furthermore, the current lockdown had always allowed travel if you couldn’t run your business any other way.

But while some trades carried on, the majority of the car industry - and pretty much all OEMs and franchised dealers - reasoned that the wider social need eclipsed their desire to sell cars.

But the significance of the government making a clear statement on the rules of engagement shouldn't be underestimated: within moments of the news, web traffic to the websites of Autocar and sister title What Car? lit up, and within hours dealer sources were talking about scrabbling to get staff off furlough.

Car buyers were researching new models again and dealers were scrabbling to make arrangements to both deliver cars that had already been bought but not collected prior to the lockdown and to rebuild pipelines of orders to keep them in business for the long-term.

Coincidentally, but equally significantly, in the 48 hours surrounding that announcement, the automotive industry’s global (and, in a limited but no less significant way, European) manufacturing base also started to announce plans to crank slowly back into action. From Kia to Jaguar Land Rover to Vauxhall, taking in Aston Martin in St Athan and more, the blanket approach to shutdown received notice that it was being eased. 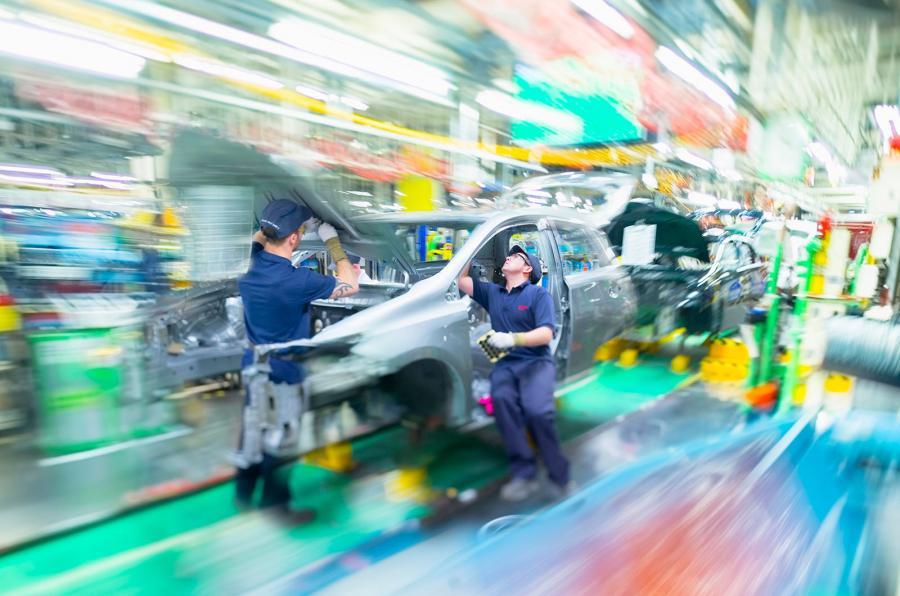 Yes, output will be defined for some time by social distancing protocols and the number of staff volunteering to work, but the wheels are in motion to get the factories running again - and once they do, they're too expensive to keep stopping. Once new cars start rolling off the line, the industry has to get back to work, marketing, selling and more to ensure that the vehicles quickly find new homes rather than depreciate in fields and car parks.

Will there really be enough eager buyers, though? The answer is emphatically yes, at least for the short to medium term, chiefly because so much of the UK market is dominated by regular renewal cycles driven by the mass uptake of PCP finance deals, but also because there's now a significant backlog of pent-up demand from would-be buyers who have been unable to complete their orders for months.

This in itself is a risk for the manufacturers, who will have restarted their factories as soon as morally feasible at least in part fearing that large numbers of people will switch to nearly new or used alternatives if demand isn't met in a reasonable timeframe. Already, a typical 12-week waiting time for a factory-order car pre-crisis is being talked of in terms of being a 26-week order. If that's true, it’s not hard to imagine why many buyers might see what’s in stock for immediate collection instead, And while it’s also true that many manufacturers operate nearly new schemes, and profit handsomely from them, it's also an immovable truth of the industry that those shiny new cars rolling off the production lines need shifting.

But with supply still expected to fall short of demand quickly (a recent survey revealed that almost one in five visitors to whatcar.com, a heavily car-buying focused website, were planning to buy within a month of lockdown ending), this desperation among manufacturers and retailers to shift cars isn't expected to last long.

As a result, it's widely expected that previously negotiable discounts will rapidly be reduced, and the hard-hit car makers and sellers will look to recover some of their lost trading year by shoring up profit margins, at least until the balance shifts.

Pat Hoy, who analyses market pricing for What Car?, says he has already detected that discounts are contracting. “While the market is frozen, most dealers that are open have been nurturing leads, making it harder to get a clear indication of what their plans are for when business opens up again,” he says. “But the clear expectation is that, as soon as demand outstrips supply, they will look to reduce incentives and discounts and focus on profitability.

“Of course, there will be variables within that. Some manufacturers will have supply sacrifice profit for market share, and a scrappage scheme focused on taking older cars off the road and getting people into hybrid and electric vehicles could skew the picture, but the likelihood is that, for most buyers, discounts will narrow as soon as the market opens up.”

That leads to the final point: which brands might we see soaring as the crisis eases? Pundits are cautious, but the likelihood seems to be that it will be those who can deliver cars made in countries that are further along in dealing with the impacts of the coronavirus. That suggests China - and notably MG, which has already been making strides with its compelling ZS EV and is looking to import its new 5 electric estate once the lockdown ends - and South Korea, from where Hyundai, Kia and Ssangyong import many of their vehicles.

For now, though, the message is clear: the shortest waiting times and the best discounts won't be around for long.

Coronavirus and the car world: Audi and Daimler to restart production

Increased demand? I'd think the opposite.

Apart from fleet replacement, going into a recession usually kills demand of everything apart from sub £1000 run-arounds. Even that Tom Hartley article says he expects to lose millions on discounting current stock.

Very thin evidence on offer for an early sales boost. So what if web traffic is up. Half of the country is at home with nothing else to do but play on the web, configure dream machines and compare discounts. I doubt very much that any demand sustained for more than a few weeks will return to anything like the figures seen over the last 2 years. In normal times demand was falling with over capacity evident.

Those , whatever industry they are in, are deluded if they think we can return to the levels of employment and income seen previously. As for PCP creating regular renewals, a bit maybe, but people with less money prioritise differently. Maybe that second nonessential car is not replaced or becomes an older used model.

I hope I am wrong, but think I am a realist.

28 April 2020
The world will be a very different place when the current lockdown comes to an end and apart from the super rich (who always seem to escape the worst economic downturns), most of the world will be facing financial hardship for years to come.

Everyone wants life to return to normal but after such a horrific episode in world history (and a threat that still remains), that seems highly unlikely. Talk of punters clammering at the gates of car dealerships, desperate to buy their next car, seems like wishful thinking to say the least.

Profitering from supply shortages during the Coronavirus lockdown will bite them.

It's all very well stopping discounts or trying to charge even more for their cars, but a significant amount of people will be less well off, forced to take pay cuts or even be without jobs after lockdown, as well as used to working from home / not using their cars any more so demand will be less anyway, even for finance deals.

I won't be renewing my car because:

1) I resent the ridiculously huge prices of new cars these days (even basic entry level models) - and it's not all because of essential safety equipment and emissions regulations when some superminis now start at almost £20k2) I won't be using my car as much after this lockdown finishes due to working from home more and seeing the positive effects on the environment of the lockdown3) my current car still works fine and still enjoys cheap road fund licence and insurance whilst not being full of unwanted, fashionable, tech to go wrong4) who knows what new taxes and regulations will be imposed on motorists as we head towards the ICE new car ban in 12 years time, so if you don't buy an EV, that's a lot of money to spend on a vehicle that might turn into something you can't use as much as you want to (e.g. city centre bans) or will cost even more of a fortune to run. Buying an EV isn't an option for me either as they are still way too expensive and compromised, as well as potentially containing soon-to-be-obsolete technology.

Amazing what greedy corporations and politicians can do to a car enthusiast >:(

What about all the cars just now that are near or past there service intervals?, and with the M.O.T getting a six month extension, who are driving around in a potentially dangerous car?, these are only a few questions I'm sure could be asked.

I would have thought many

I would have thought many people will have far more important things on their minds for quite some time now, rather than choosing a new car. But I'm sure the car industry will be grateful for the efforts of people like Mr Holder, anyway

Get those orders in for

Get those orders in for Landrovers and Range Rovers guys, you know they the best in the whole wide world!

Totally agree. Autocar claim they're not in the pockets of car manaufacturers and come out with rubbish like this...

My reading of the current supply & demand equation is that new cars wil be much harder for dealers to place once lockdown finishes.  Most households will be short of cash and happy to stretch the utilisation of the cars they already have, especially if their monthly mileages have dropped meanwhile.  Looking in my own driveway at the many thousands of pounds of machinery sitting and quietly depreciating while offering minimal utility has been a wake-up call.

28 April 2020
They'll have forecourts awash with already unsold depreciating stock. They'll be desperate for a sale. Any talk of dealerships playing hard to get in this climate is both bollox and downright cheeky.