In America, apparently they don’t put labels in boxes of assorted chocolates, telling you how each different delightful sugary nugget is flavoured. So, as Forrest Gump’s mum said, life is like a box of chocolates, in that you never know what you’re going to get.

We British, meanwhile, being more reserved, prefer to know exactly what kind of chocolate we’re getting so insist captioned pictures are enclosed within every box. A box of chocolates here, then, is very much unlike life.

Which brings me, convolutedly, to the new Volvo S60, which is the first Volvo to be built in the US, where it will be nothing like a box of chocolates.

Here, it will be precisely like one. This is a Volvo that gives you – as you’ll guess if you’ve been paying attention to the brand’s recent rapid model roll-out – precisely what you expect, because all new Volvos follow largely the same formula.

To date, it’s a successful one. On the outside, it means you get one of the best-looking cars in its class, if you ask me, which I’m prepared to argue you sort of did. Standard Autocar-design-award-winning Volvo: the new S60 has a strong family resemblance, fine proportions, even some discreet aggression, with just about enough differentiation from other Volvos to currently avoid accusations of Russian Dollness, although I suspect that’s only a matter of time. That they’re better-looking than today’s BMWs probably helps.

Each car has hints of suitability for its segment, at least. The S60’s is the segment of ordinary/nice/4.7m-long saloons, so it’s a rival for anything from a Ford Mondeo to a BMW 3 Series, and Volvo will probably argue at some length that it’s at the more premium end of the market, given the difficulty you’d have spending this S60’s £38,000 on a Mondeo. But with the Ford being much rarer than the BMW these days, if you value exclusivity, a Mondeo, or indeed an S60, which hasn’t set UK sales alight for quite some time, is among your go-to options.

Volvo is, effectively, and by accident rather than design, an SUV company today, given how many off-roaders it sells. And the S60 might remain a niche in its line-up, given family saloons are a declining sector. Especially given it’s launching in only one specification, too – a four-cylinder 2.0-litre in R-Design trim – although more options will come. Nothing bigger than a four-cylinder 2.0-litre, though, and nothing diesel. 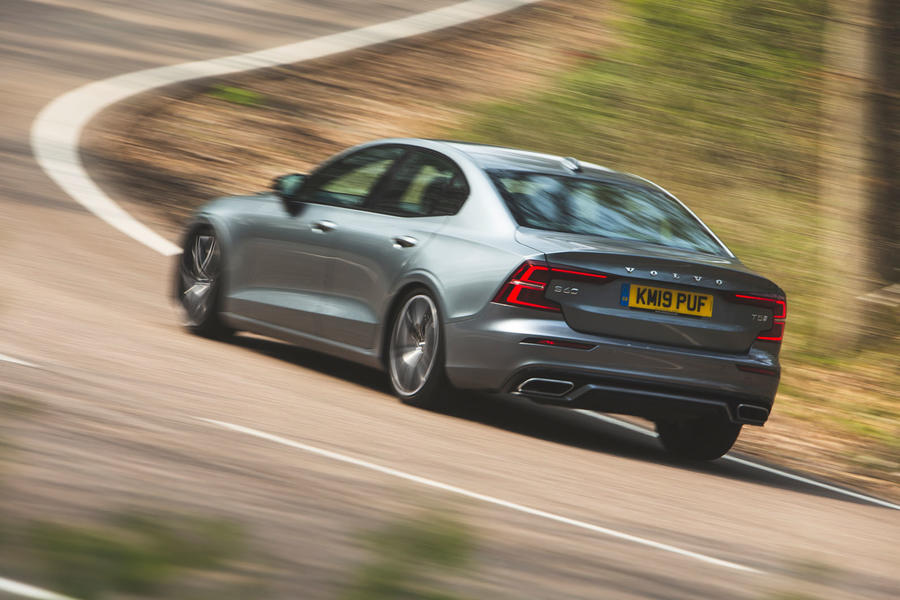 For now, that means the T5, with the T meaning petrol and the number relating to its power rating, which seems to go up to eight rather than 11, disappointingly. It has 247bhp and front-wheel drive, although you can have up to 394bhp and all-wheel drive in the US in the T8, and [Volvo spokesperson taps nose] “more specifications and powertrains will arrive here later”, too.

Meanwhile, the T5 drives through an eight-speed automatic gearbox and sits on Volvo’s SPA (Scalable Product Architecture), which underpins all of its big cars. It’s a mostly steel monocoque in which the engine sits at the front and is transversely mounted and, in other Volvo models, can have electrical assistance for both front and rear axles in place of the diesels that Volvo is currently repulsed by.

Inside, there’s even less difference between Volvos than there is on the outside. Volvo has settled into a Scandi-cool way of doing things, with good seats, a widely adjustable driving position, a round steering wheel, clear dials and a vertical touchscreen that’s relatively easy to navigate in the scheme of things but still makes you control too many functions from it, in the name of removing physical buttons. So it looks good, works satisfactorily and, at least, reacts quickly to inputs and remembers you’ve turned off lane keep assist the next time you get in the car. There’s a decent-sized boot and plenty of space in the back for grown adults to sit behind the same in the front.

There are adaptive dampers and drive modes, which are among the few things selectable via separate buttons on the centre console, slightly needlessly given that you’ll put it in one mode and leave it there for the next three years. And I suspect you’ll get not far into the good side of 30mpg whichever mode you pick. And whichever mode it’s in, the S60 is a largely amiable companion, too. Mature, sophisticated and largely uncomplicated in feel.

Volvo’s latest four-cylinder engine family can lack refinement, depending on its application, but I’ve no such qualms with the 2.0-litre here. It starts, goes and revs quietly and freely, with an eight-speed gearbox that slurs nicely and seems to react and predict well. It’s less impressive mooching to a halt, if you take pleasure in stopping without a jolt, because the stop/start judders the engine off and with it your last couple of feet of finesse. Which is not how a relaxing car should be.

The ride is towards the firmer end of pliant on the 235/40 tyres and 19in rims that are optional and fitted to our test car. It’s fine but might be better (yet look weedier) with a bit more tyre sidewall and what might be the less unsprung mass of the 235/45 18s that are standard. Handling is secure, reassuring and never exciting but always capable and pretty relaxing, with a relaxed steering ratio but positive steering weight and feel and self-centring.

Wheels aside, the car you see here is one that comes without too many options – metallic paint and, praise be, a spare wheel take the R-Design Edition from £37,920 to £38,745 – and feels like it gets everything you’d realistically want. Here’s where the ‘premium’ argument comes in. You have to try very hard to spend that much on a regular large family car (although better depreciation means the Volvo is frequently little less affordable than a high-specced one) and even move quite a long way up the ranges of Audi/BMW/Mercedes-Benz compact executive cars before you reach the Volvo’s price ticket. 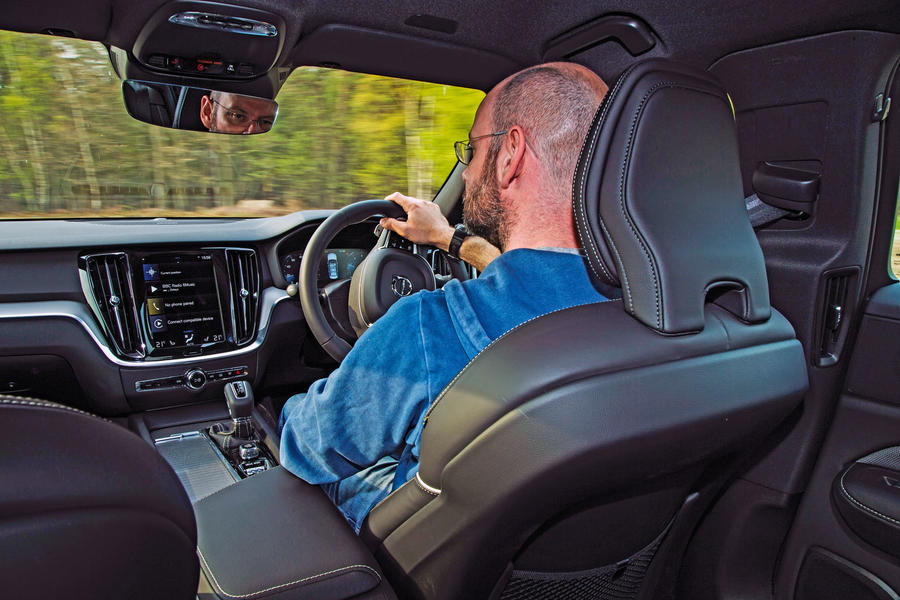 I’d have one of these over an Audi A4 or Mercedes C-Class and pretty much all conventional large family saloons. I think a BMW 3 Series’ superior ride and handling would sway me, but I’m not sure the handling of an Alfa Romeo Giulia or Jaguar XE or Kia Stinger would be enough to make me ignore just how nice the Volvo is inside.

With the consistent blurring of different segments and such a prolific number of cars on sale, there have never been so many different choices. Pick a large family saloon or premium compact exec or even a crossover and you’ve got, what, 20 or more different cars to choose from? Doesn’t matter how many, really. The S60 is among the best of them. 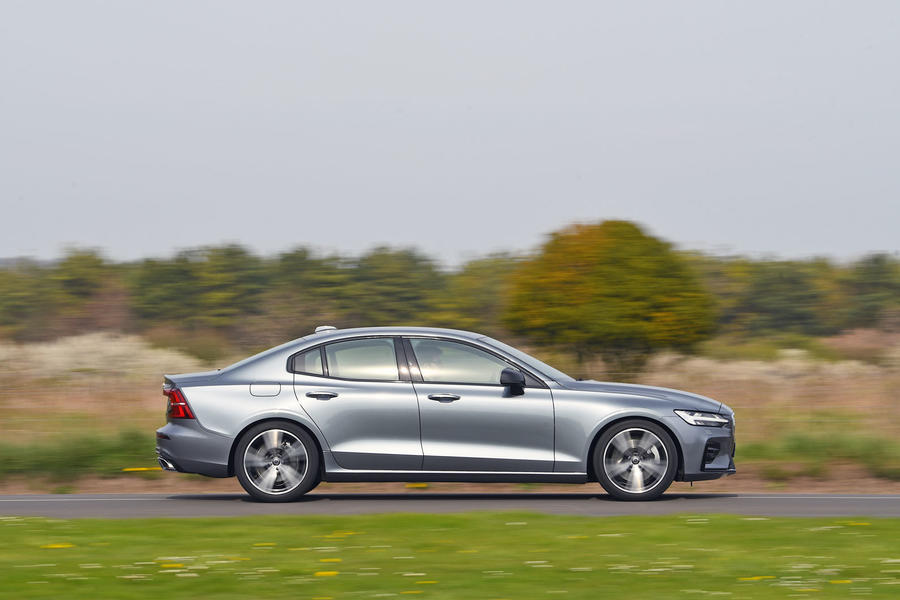 Why no manual transmission?

I like the new S60/V60 and bigger S90/V90 but why can't I order any of them with petrol engine and manual transmission?

Volvo have nailed the exterior and interior design. This S60 seems neater design and better resolved rear end than S90 to my eyes.

Still, a BMW 3-series is still the go to choice for the enthusiastic driver with Mercedes-Benz C-Class and Jaguar XE not far behind. Volvo will remain a left field choice but more popular than the pretty but rather rare Alfa Romeo Giulia.

In my opinion the BMW 3-series GranSport hatchback offers better family practicality along with the Audi A5 Sportback over their saloon brethren. Seems perverse considering the non-premium Ford Mondeo, Vauxhall Insignia and I believe Peugeot 508 are all hatchback designs. Mondeo Vignale is 'trying' to be premium but...no thanks.

I currently have a Volvo S80 saloon and although boot is a good size the small bootlid makes loading a chore and you simply can't utilise all the space. All because the rear window is fixed and won't lift up.

I think my next car will be BMW 320i GranSport hatchback or Audi A5 Sportback with petrol engine and manual transmission. I love Audi A7 which is also a hatchback but it's expensive and automatic gearbox only.

I don't know about the market for this car

The S90 in the US sits on Dealership lots for months. The sedan market is kaput! The U.S. factory may be better off cranking out XC-40s they are in very high demand.

Not sure about the XC40 being in high demand, 3,500 sales in 3 months isn't rocking the States. XC60 on the other hand is doing alot better, selling twice as many in fact.   'Small' SUV's do better in Europe.

Try getting one from a dealership

The XC-40 cannot be built fast enough for orders. Prospective customers have been waiting or shopping for something else.  Don't even attempt to use Care by Volvo to get one. There are not enough for the foreseeable future.

Must be a lot of talented

Writers and reviewer's out there, all of it wasted writing writing comments, whilst full of confidence they could do infinitely better. The comment section turning into another wart of our time.