From £19,1408
Share review
Not the most exciting of fast estate cars, but probably a truer Superb, and a more appealing car, as a result
Share
Open gallery
Close

The Skoda Superb 2.0 TSI Sportline might be the answer to a question nobody asked. Something along the lines of: “What would happen if we dropped an engine good enough for one of Volkswagen’s pokier Golf GTIs into one of the most notoriously comfy and unexciting, yet legendarily spacious, family cars in the world?”

You’d end up with a car much too incongruous to work, right? One likely to appeal to precisely no one with a clear idea of the wider choice contained within the current mid-sized saloon-slash-estate car market. Wouldn’t you? Well, perhaps not. This car certainly appeals to me – and for surprisingly rational reasons.

Sportline trim has just been added to the Superb showroom range, as it has to that of other models within the Czech firm’s catalogue, as part of a model-year refresh. Unlike some sporty derivative treatments, it sits in the mid-range of the Superb buying hierarchy; there are Sportline Plus and Laurin & Klement options above it, and another three trims below.

Plump for a Superb Sportline and you get just enough mechanical and cosmetic purpose to suit a car like this, and not a hint more. Nineteen-inch alloy wheels, understated sports bumpers and a light dusting of gloss back body trim mark out the exterior, along with badging discreet enough to be overlooked by the majority. On the inside you get Alcantara sports seats, a very mildy promising three-spoke steering wheel, polished pedals and some slightly generic but inoffensive-looking faux carbonfibre decorative trim.

Under the skin, you get lowered, stiffened sport suspension and a hint of additional brake-based torque vectoring over and above what a normal Superb is capable of. Sportline Plus cars get ‘progressive’ passive variable-ratio power steering as well; our test car didn’t have that, but did combine its sport suspension with optional adaptive damping at extra cost.

And that’s it. It’s the go-faster treatment done with a particularly light touch – and it’s surprisingly easy to like. 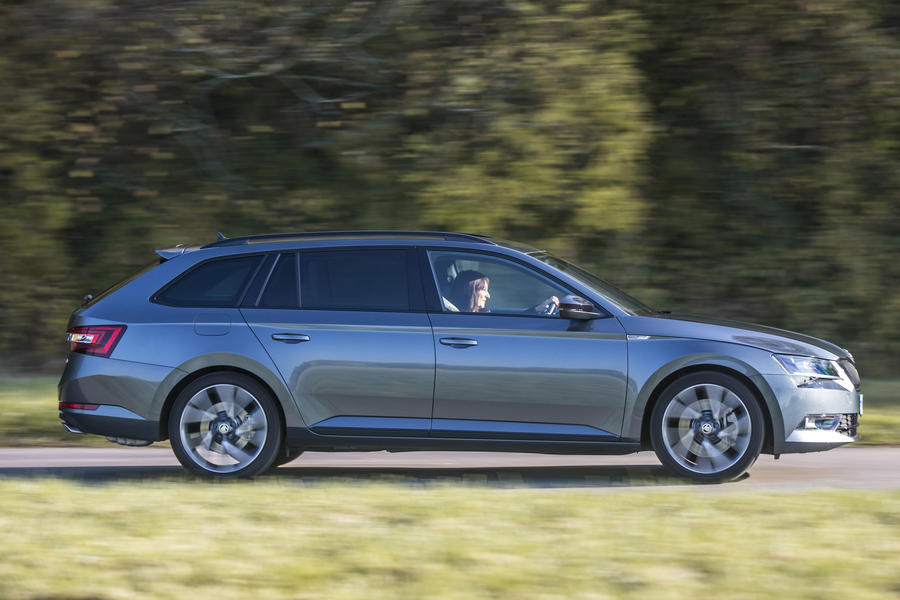 You can have a 148bhp petrol or diesel engine in your Superb Sportline, or a 187bhp diesel, if you fancy one; the punchier diesel’s the only other four-wheel-drive option. Those other versions are cheaper than this one, predictably, and might make you feel a bit less like you’d lost touch with the real world than you do as you feel this generously sized estate car bound up steeper gradients with most of the urgency of a decent hot hatchback.

But here's the thing. Once you get beyond to the unlikeliness of the idea of this car, it’d be easy to convince yourself that the reality of owning it, and driving it on a daily basis, could make sense.

The Superb is big; big on the outside, big on the inside (even by the standards of a lot of £40,000 saloons), conventionally laid out, solidly built (albeit a touch plain-looking in places) and persuasively comfortable. The Sportline derivative treatment doesn’t change any of that. It’s not one of those sporty options that misses out on boot space, or room for a spare wheel, for the sake of having a subwoofer because it’s mid-level trim; and so that gigantic 660-litre boot, rising to nearly 2000 litres with the seats folded, is present and correct – and is sufficiently cavernous to swallow more stuff than you’ll get in the back of most largish SUVs.

In the second row seats there’s room for even taller adults to stretch out, with the slight sense of narrowness-of-cockpit with which owners of previous-generation Superbs will be familiar having been banished at the last major model redesign.

Up front, the car’s driving position is fine – not particularly low, but all the more convenient-of-hip-point for daily use as a result of that – and the car’s sports seats offer a nice blend of everyday comfort, lateral support and understated material richness.

The 2.0-litre engine isn’t piped through the kind of sports exhaust made to attract attention, and if its audible note is digitally augmented by the car’s stereo when you use Sport driving mode, it isn’t made overly loud or contrived as a result. It’s just a really good engine: smooth and quiet when you want it to be, torquey when punting around, rangey and waspish when you’re in the mood, and – even here – ready to chip in with a high-30s-mpg economy return when you need one.

It’s got lots of mid-range punch but not so much that the accelerator pedal loses its linearity, and still feels nicely responsive and very willing to rev beyond 5000rpm. None of which is news: it’s just how the EA888 is. But you don’t have to drive many directly comparable engines from rival manufacturers to realise that it’s a rare combination of qualities.

It’s perfectly easy to drive the car smoothly because the controls make it so. Even in Sport mode, the Superb’s accelerator isn’t overly sensitive and its gearbox isn’t given to sudden unwanted downshifts.

But if you get stuck into the farther reaches of that powertrain’s performance, you’ll find plenty of appetite for speed. The car has all the traction it needs courtesy of its clutch-based four-wheel-drive system, taking off front T-junctions at full power without much more than a hint of wheelspin and very little power-on understeer. There’s A-road overtaking urge to spare whenever you want it, too, and more motorway grunt than anyone would be well-advised to deploy in 2019.

But it’s the Superb’s ride and handling that perhaps best characterise it. The sheer size of this car’s wheelbase, and its considerable width and bulk, would make it very challenging to endow with the agility and involvement of a first-order performance car – and very likely unrecognisable as a Superb if Skoda tried. Which is why it’s with some relief that you find out they haven’t tried that. They have, instead, simply made this car better-controlled, more accurate-handling, more assured and easier to drive at speed than other Superbs.

There’s a degree of extra lateral body control about the car, and a shade of extra handling urgency as you negotiate corners – but nothing you’d go so far as to describe as an incisive turn-in. The standard car’s tendency to heave and pitch when you tackle uneven surfaces has been dialled out, but Skoda’s stopped short of replacing it with a sense of untapped damping authority – because that’d only have made it less comfy-riding at the speeds it’ll mostly be driven. And so there’s just suppleness, and a sense of calm, level control, about the car over most A- and B-roads, with only sharper edges able to tease out a slightly short, hollow feel about the ride. 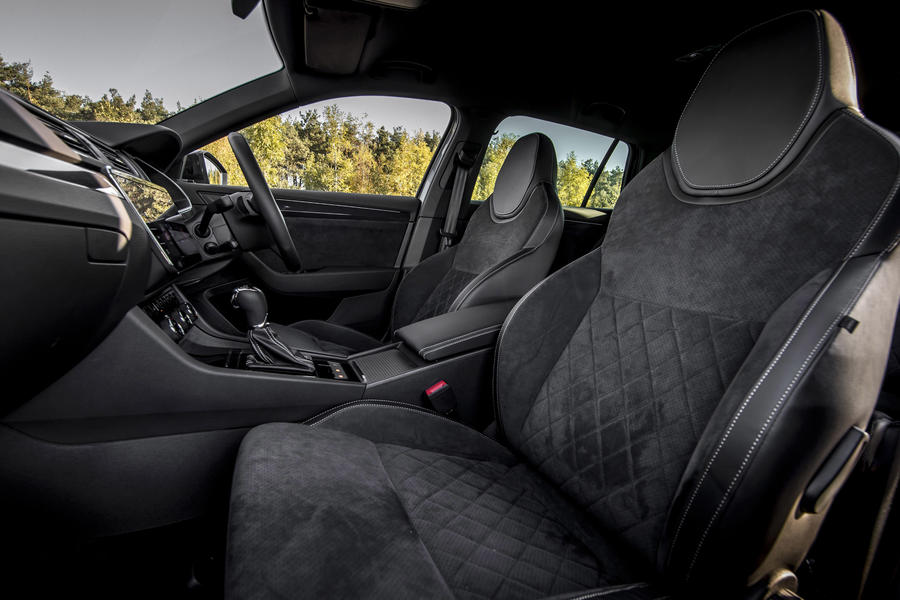 Do you like the sound of a dynamically well-rounded, fast, practical, decently priced family car? Are you in the apparent minority that recognises you’re less likely to get one by buying an SUV with a raised centre of gravity than you are by buying something lighter and lower, in which your money will probably go further as far as performance bang-for-the-buck is concerned? Then quite possibly.

Dismissing this Superb on the basis that it might not be fast enough, exciting enough or desirable enough to be worth your attention would certainly be pretty daft; dafter, even, than the idea of the car might have seemed in the first place, believe it or not.

Because this car has all the pace and poise you’re likely to need on the road – and it won’t annoy you on the office commute with a tetchy ride, a noisy engine or over-sensitive controls. It’s smart and stealthy, and it doesn’t shout “look at me” at every other poor soul trapped in that traffic jam on the ring road. It doesn’t have the sort of model badge you might feel sheepish about explaining to someone.

It could be more exciting, admittedly. But, on top of everything else, this is every inch the big, quiet, solid, comfy, easy-going underground bunker of a car that we’d all want a Superb Estate to be. 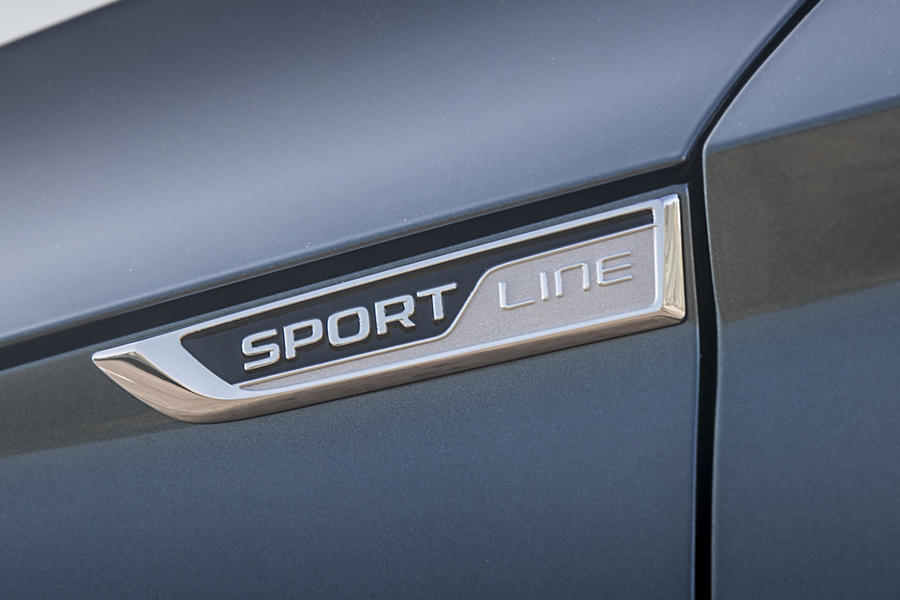 Do people conveniently forget about the whole diesel scandal and the fact they (VW, BMW and Daimler) execs voted down by one vote not to test on humans preferring to test on primates? Not sure what the difference is personally looking at some people!!

I for one cannot see past this and therefore will never buy another German brand or owned car again.

I guess if you are a badge person it's hard to see past German brands but for those who arent and who have morals I honestly don't know why their sales have not plummeted.

There is an argument that emissions scandals were not the preserve of VW however, it was them who got caught and it was also them who tried in vai to cover it up and even went as far as trying to hide the software by writing it further into the cars brain in the hope it would not be found.

Don't believe me, if you have Netflix look up Hard NOX documentary ..... disgusting behaviour yet they appear to have been let off the hook by those that cant see past a badge.

Smart, efficient car which is

Smart, efficient car which is well priced and luxurious

Smart, efficient car which is

Smart, efficient car which is well priced and luxurious