From £19,1408
Executive car gains two new engines and minor aesthetic nip and tuck while remaining as comfortable and practical as ever
Open gallery
Close

This is the facelifted version of the third-generation Skoda Superb: the large, hugely practical and comfortable barge championed by airport taxi drivers and sales executives up and down the country.

While that might sound like some sort of snide generalisation, it’s not really, because according to Skoda’s European figures, fleet customers accounted for 82% of Superb sales in 2018. The updates introduced as part of this mid-life refresh are intended to shift that bias even further towards business buyers.

So, what are they? Well, in typical mid-life refresh fashion, the car’s looks haven’t been changed too much. There’s a lightly redesigned front end that incorporates a new foglight and running light design (and also extends the car’s length by 8mm), more chrome, a slightly altered grille and 'Skoda' lettering across the boot lid instead of the classic roundel. The interior has been refreshed along similar lines, with additional chrome and a new digital instrument display being the most noticeable features.

The four-strong engine line-up has been rejigged, while new 148bhp 1.5-litre turbo petrol and 148bhp 2.0-litre diesel units are set to join later this year. The Superb iV plug-in hybrid - Skoda’s first ever electrified model - will make it to the UK in 2020, while the rugged Superb Scout - a lifted, more off-road-friendly version of the estate car - has been introduced in markets other than ours. It's a smart-looking thing, so it's a shame we won't be getting it.

There are six trim levels to choose from, with prices ranging from £24,655 to £40,695, and four-wheel-drive is still available with the most powerful 2.0-litre petrol and diesel engines.

Elsewhere, though, it’s business as usual for the Superb. It remains on the same MQB platform, is still suspended by MacPherson struts and a multi-link arrangement at the rear and is still available in both liftback and estate bodystyles. 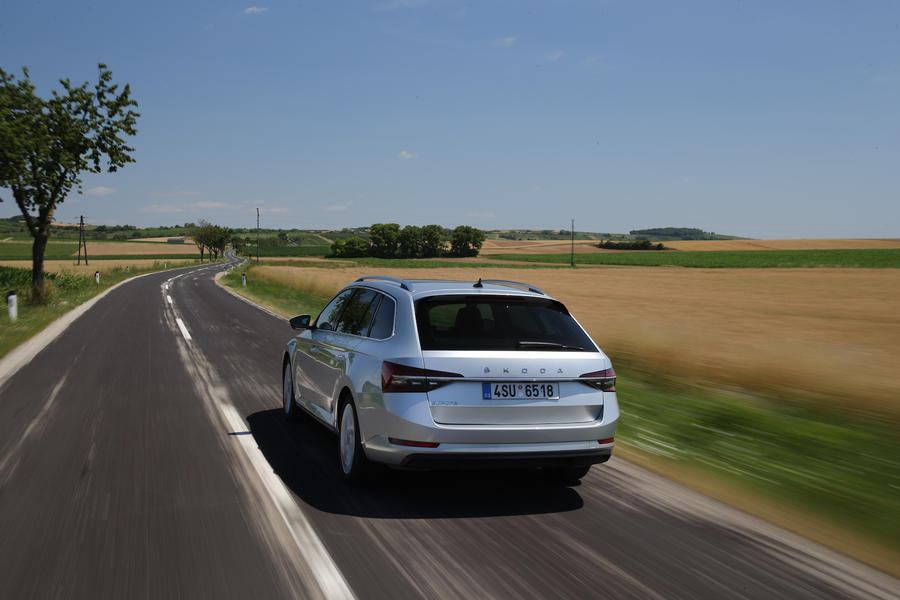 We tested the 2.0-litre TDI powerplant, seeing as it’s brand new and expected to be the most popular engine among British buyers when it arrives. It’s the first of the Volkswagen Group's latest-generation 'Evo' diesel engines to be offered in a Skoda, and it develops 148bhp and 266lb ft - all of which is deployed to the front wheels via a seven-speed dual-clutch automatic gearbox.

It’s hardly sporting or in any way exciting, but you can’t deny that it suits the Superb’s laidback, wafty character to a T. It’s an impressively refined motor, this: hushed, smooth and unintrusive. It’s barely audible from inside at a steady cruise, and even under full-throttle acceleration it still manages to sound distant. Admittedly, you can still very much tell that it’s a compression ignition unit, but it’s one of the good ones.

There’s ample performance, too, with the engine pulling well enough from 2000rpm to bat away any concerns about it being sluggish or underpowered. The only slight issue is that the DSG ‘box can seem reluctant to kick down at times, instead choosing to stay locked in whatever gear it happens to have selected, even if that may not quite be suited to deliver the amount of acceleration you were looking for. It’s a minor complaint, but that dampened sense of response can be frustrating. We’d wager it has something to do with the dreaded E-word, but we might be wrong.

Much in the same way as its engine has been tuned for long-distance cruising, so too has the big Superb’s ride and handling. Make no mistake, this is a comfortable car - one that's happy to smoothe out undulating surfaces with its cosseting, gentle approach to body control. It’s soft without feeling wayward, although it does have a tendency to roll in a reasonably pronounced fashion through faster bends. It feels its weight in such instances, too, and if you tip it in to a corner at pace, you'll be greeted with a fairly pronounced amount of squeal from the front tyres.

Switch to Sport mode and its adaptive dampers do a marginally better job of tying things down, but given the fact that this most certainly isn't a car for enthusiastic driving, such a setting seems a touch redundant. Still, nice to know it’s there. 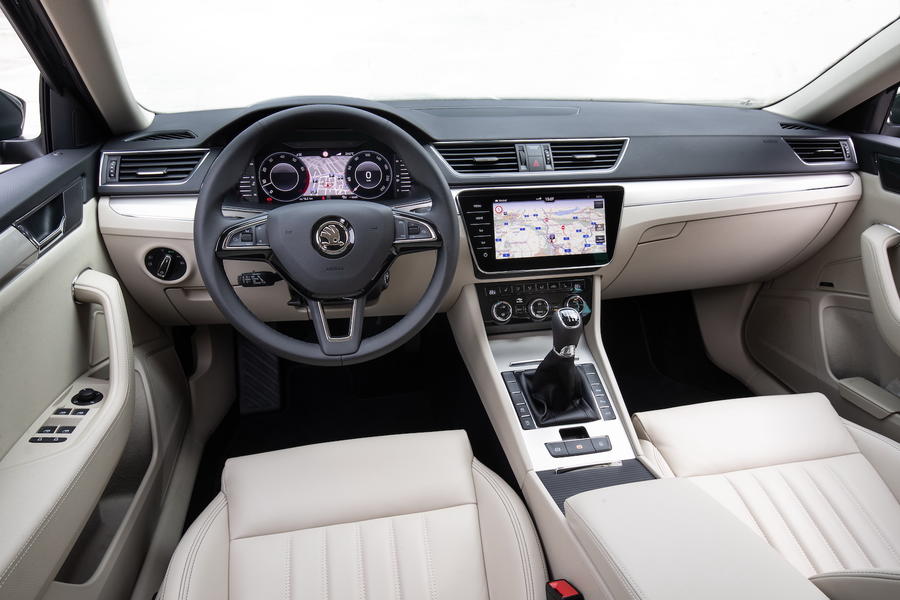 While Skoda happily admits that the vast majority of Superb buyers come from the fleet world, it also makes a dependable family wagon.

In SE-L spec, the interior is plush and well equipped, and there’s enough space in the second row to ensure that young children won’t come to blows on long journeys. The tallest of adults will fit back there too. And, of course, the boot is massive - regardless of whether you go for the liftback (625 litres) or the estate (660 litres).

There’s little here for the enthusiast to get really excited about, but it’s hard not to respect the Superb for what it does. It’s a comfortable, refined, practical and effortless long-distance machine. If we were staring down the barrel of a 400-mile drive and were told the Superb would be our car, we certainly wouldn’t be too upset. 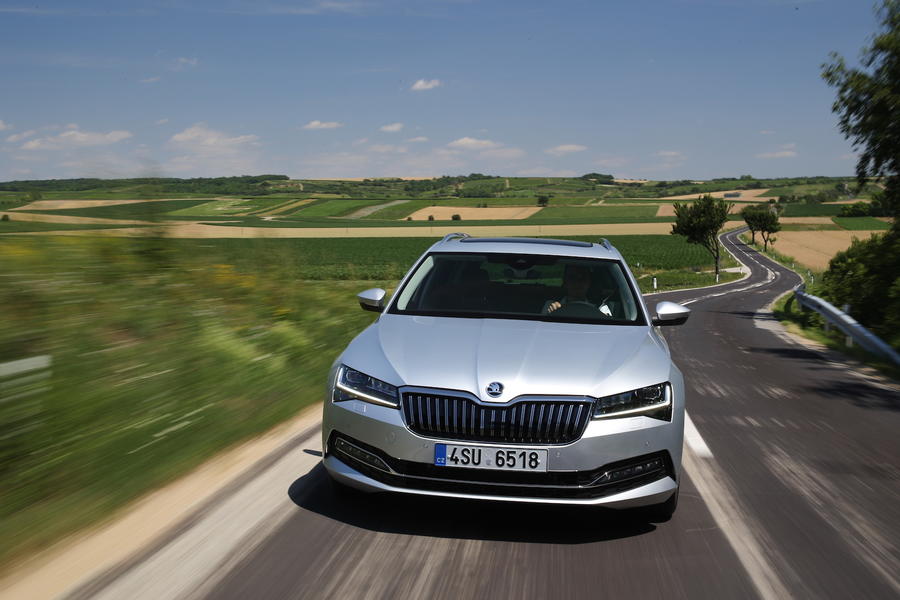 If ONLY they'd allow for imports to the States - Temporarily biding time in Yankee-Land, this would be an absolutely fantastic motor.

Red States have little, if any, oversight for tuned Diesels... this would be a stonkin brilliant motor when Gov't is removed from the engine.

VAG cars are consistently given high scores by reviewers across a range of sites, both in the UK and abroad. This is because they offer good value for money as well as functionality and substance over style.
Wasting the extra money on a so-called "driver's car" on the clogged-up British road network makes little sense.
Why not spend the saved money on a nice family holiday, or are your egos just a bit too big for that?
Thekrankis 5 July 2019

Superb cars...see what I did there?

And how do you substantiate

And how do you substantiate that comment ? Once you supply the evidence in 100 % solid format then please feel free to make these comments.Without it, please stop