This is the updated version of Mercedes-AMG’s medium-hot performance E-Class. The E53 is the prawn jalfrezi of the fast executive-car world, where an E63 might be something closer to a vindaloo: spicy, tasty - but perhaps just a little bit easier to stomach than the nuclear option.

Or perhaps a jalfrezi isn’t the kind of takeaway cuisine that’s sufficiently innovative to do that comparison justice (more research required, clearly). Introduced as part of a new derivative-spanning family of 48-volt mild-hybridised AMG models three years ago, the E53 came powered by a six-cylinder petrol engine with an electrically driven turbocharger to boost its low-end response, and which also had propulsive electric motor drive assistance to call upon when needed.

As such, it was part of a pretty bold departure from walloping-V8-mongers Affalterbach; a whole family of petrol-electric hybrids, of a sort. And now, three years on, it looks as if the gambit has stuck, and AMG’s showroom offering has genuinely been broadened out, with moves now being made that cement this car and its ‘53-badged electrified relations into the Mercedes-AMG showroom range with some permanence.

In this mid-life facelifted form, the E53 gets many of the same interior and exterior styling revisions that Mercedes wrought on the regular E-Class range last year. It has also been through a dynamic retuning program intended to make it a bit more dynamically versatile. According to ex-AMG boss Tobias Moers, it now delivers “even more of a range between long-distance comfort and precise dynamism” than the car could command previously. Those must have been among the very last words than man uttered before slipping out of his branded padded jacket and ‘strolling’ out of the door to Aston Martin last year.

The E53’s petrol-electric powertrain is unchanged. Mercedes’ claims for peak power and torque for it are fairly modest-sounding for this sort of car, at 429bhp and 384lb ft; but those don’t count any assistance from the car’s hybrid drive motor, which can apparently be worth as much as 184lb ft in the right circumstances.

The E53 uses a tweaked version of Mercedes’ ‘stock’ nine-speed torque-converter automatic transmission rather than the special ‘multi-clutch’ gearbox of the gruntier E63 S, and it has a different rear differential than the V8-powered model too. It has the same adaptively damped, three-chamber air suspension hardware as the E63 gets, though; and in this mid-life facelifted form it also gets the ‘AMG Dynamics’ intelligent traction control software that was saved for the V8 models previously.

Mercedes-AMG’s press material also mentions a new and optional ‘AMG Dynamic Plus’ package for the E53, through which the ‘Race’ and ‘Drift’ driving modes also previously reserved for the V8-powered E63 can be added for extra cost. Now there’s an eye-catching addition. Unfortunately there’s no mention of that package in the car’s UK-market brochure, so it may very well be that Mercedes UK would rather keep that little bit of extra powder dry for the top-of-the-range version that spread it around more liberally. When an explanation for that omission is forthcoming from Mercedes UK, you’ll read it here first. 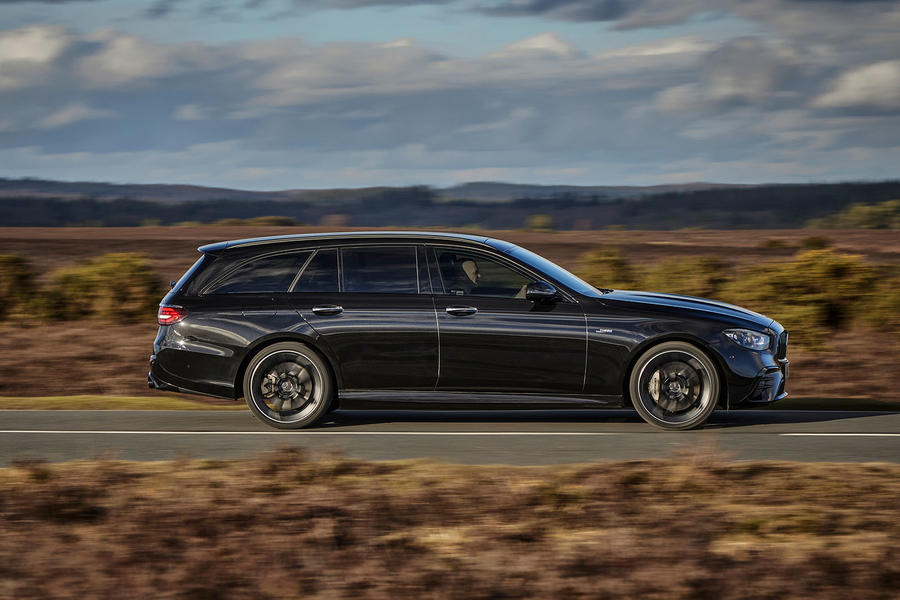 The hot E-Class’ styling has gone down the same ‘black pack’ route that so many German sporty executive options have taken over the last couple of years. The E53 now comes in regular and ‘Night Edition’ trims, and we tested one of the latter with much of what might otherwise have been its exterior brightwork – its front splitter trim and mirror caps, window surrounds, exhaust tips and roof rails – ‘blacked out’ for extra stealthy visual effect.

Except it isn’t really ‘stealthy’ if the effect is so overdone that it actually attracts your attention, is it? And in case we missed all the stealthiness, I suspect someone in the Affalterbach marketing department suggested that Mercedes UK order its E53 press demonstrator with black paintwork to match all of that black trim; which made it look rather less like any kind of fast estate car you might actually recognise on the road, and more like some dark celestial void – albeit one with a talent for attracting muck and scree a bit like a black hole attracts passing comets.

Not my cup of tea, I’m afraid. Still, you can have a regular E53 with, well, brighter-looking brightwork instead if you prefer. The top-of-the-range E63 S, however, now comes in fully ‘murdered-out’ Night Edition trim only. I dare say it looks rather less daft than our test car did in a nice shade of silver or metallic blue rather than black; but then what do I know?

The car’s new headlights and A-shaped radiator grille do look quite smart on it, I will agree. The new ‘aerodynamic’ wheel designs I’m less sure about; with those fat, built-up inner edges, they just look blocky and heavy to me.

On the inside there are some new decorative trims and there’s also a new-generation ‘MBUX’ infotainment system with Mercedes’ very latest voice recognition and augmented reality navigation bells and whistles. More significant, however, is the E-Class’s new steering wheel design which, in the E53’s case, is really rather nice.

Performance versions of the E-Class get the car’s ‘super sport’ wheel design which has a boss of slightly reduced size, and new lateral spokes sprouting out of either side of it through which you can now more easily see the car’s shift paddles peeking through from behind. The rim could still do with being a little thinner, granted, but the whole assembly now feels slightly leaner and lighter in your hands than the steering wheel of most modern performance saloons. Meanwhile, the controls carried on those slimmed down spokes seem more intuitive to use than I remember of the last E-Class. 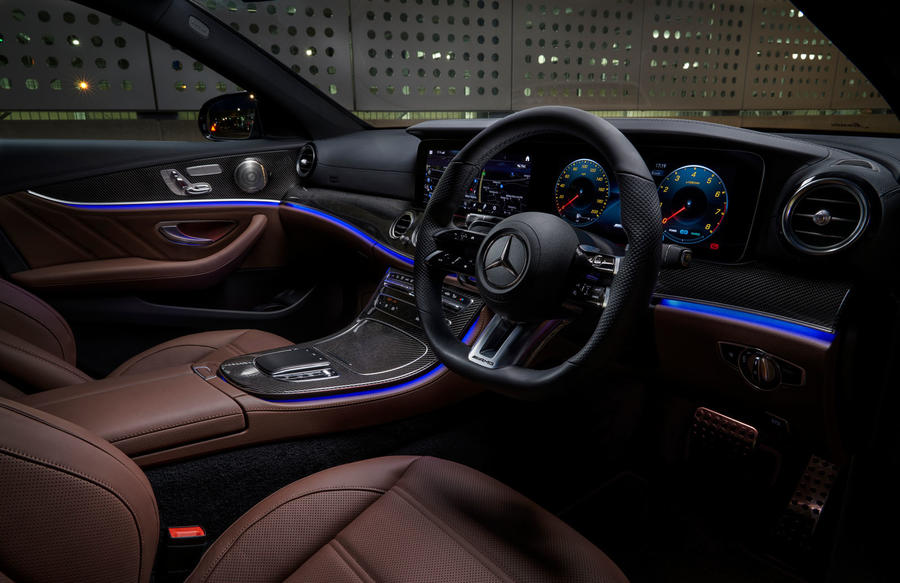 Lightness and leanness aren’t impressions conjured all too readily by much else about the E53. As bigger fast executive options go it’s one that feels its size, but can certainly get a move on when called to. Although it’s grippy, stable and by no means slow when the wind is in its sails, however, it does strike you as a car that’s been reigned in somewhat; one that, being cast in opposition to the burlier, faster and more unhinged E63 S, daren’t deliver too much in the way or pace or excitement for fear of overstepping its rightful place. That might be a strange character to find in any full-sized performance saloon, but somehow seems all the more so from an AMG.

That six-cylinder engine is more of a high-flying firework than a big-hitting sledgehammer; for an AMG, that’s unusual too. You expect big tranches of instant mid-range torque to be on tap here, partly thanks to that clever electric turbo and partly thanks to the electric motor ‘torquefill’ effect. But lock the E53 in a higher gear, flex the accelerator, and what you get only feels moderately potent. Response is good and linearity of delivery likewise, the engine really coming on song from 4000rpm and spinning with a turbine sweetness you wouldn’t get from a V8. Still, the thump of torque you expect to flood in behind a wide-open throttle at lower revs is notable by its absence.

But at least that gives the E53 a decidedly different performance character than a -63. The straight six has plenty of outright performance when you wind it up, and makes the car quite rewarding when you choose a gear for it and let the crankshaft spin. The nine-speed gearbox doesn’t always allow you to get on close terms with the engine if you leave it in ‘D’, though; it has the tendency to shift up early, as the majority of modern automatics tend to, putting rather too many ratios between your ideal cruising and accelerating ratios in give-and-take driving. The sportier driving modes mitigate this a bit. But even here, that slight shortage of accessible torque we mentioned earlier often seems to make the car’s gearbox jump down an extra ratio or two in order to meet bigger part-throttle demands, and can at times contribute to a slightly alienating sense of hyperactivity about the driving experience which a big-hitting super saloon could certainly do without.

For handling appeal and all-round dynamic sophistication, the E53 does quite well - but its chassis, like its powertrain, feels like just a bit of a pulled punch. You sit higher in the E-Class than you would in rival performance options; the seat’s very comfortable and you have good visibility, of course, but you’re aware of just a little bit of altitude separating the car’s centre of gravity and its roll axis which might not be so perceptible in, say, an Alfa Romeo Giulia Quadrifoglio or even a BMW M550i.

The car rolls a little as it corners whatever drive mode you have it set to, the sportier ones clamping down on vertical body movement but doing little for lateral response, which is good but not super-precise. The E53 feels balanced and surefooted mid-corner, but only moderately agile, and not particularly rear-biased for torque distribution when cornering under power. It’s the sort of car that can be depended upon to go where you point it, but not in a way that’ll make you tuck it in with a bit more speed and keenness next time around.

There is the usual abundance of choice for steering, engine, gearbox and suspension settings, which can be mixed and matched entirely as you prefer if you devise your own ‘individual’ program. The E53 is never better, in this tester’s opinion, than with its suspension set to ‘comfort’, however. It allows the car to breathe agreeably with the bumps and gives it a fairly supple gait at both town and motorway speeds, just as Mr Moers promised; although the 20in wheels and Yokohama tyres that come with ‘Night Edition’ trim do make for a slightly noisy ride over coarser and broken Tarmac. 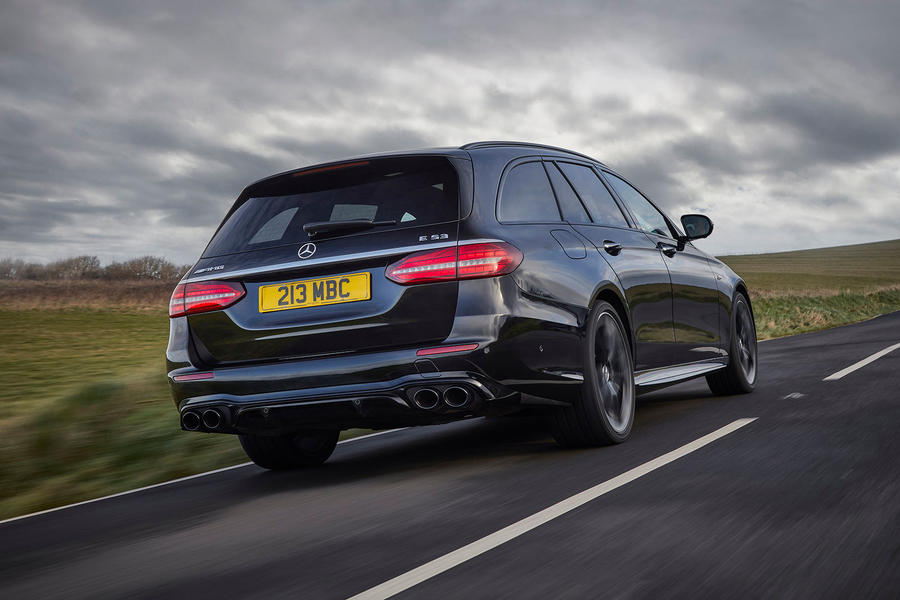 In today’s performance market, it’s quite rare to find a fast German executive option of this size, that’s this useful, luxurious and versatile, as well as pretty great to drive; and that yet doesn’t come with a six-figure pricetag.

The E53 may never be quite as muscly-feeling under power as you may expect an AMG to be; but if the pay off is 35mpg on the motorway, and 400 miles to the tank, ask yourself how much you’d really miss that initial wallop of thrust and all that V8 audible drama. The E53 doesn’t take that long getting going.

For this tester, shopping here or elsewhere would more likely depend on practicality than anything else. The E53’s estate-car body derivative, and the 1800-odd-litres of carrying space it offers, could be decisive in a segment where, right now, there is no BMW M550i- or M540d Touring, no petrol-powered Audi S6 Avant and no comparable Jaguar XF either. 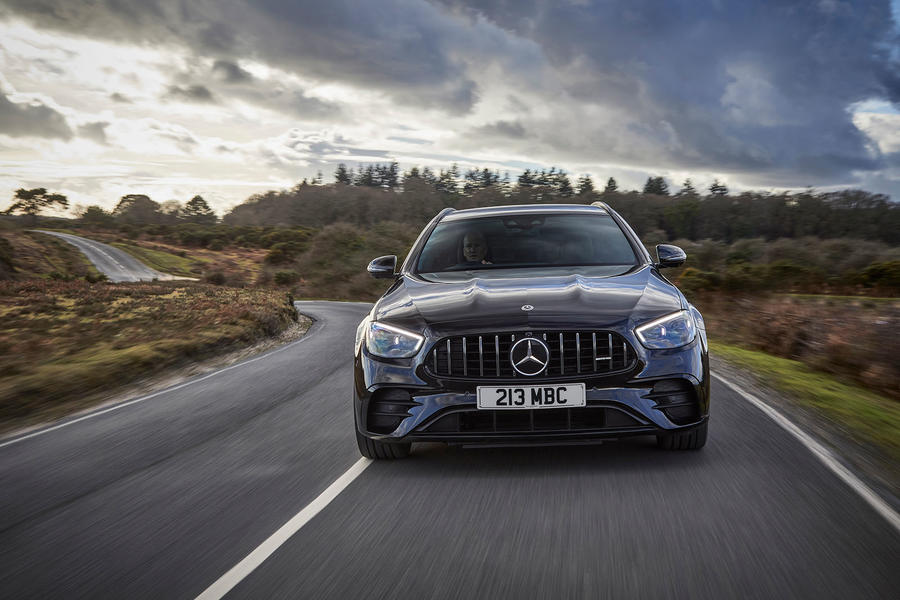