The Mercedes-AMG EQE 53 isn’t the first road-going EV produced by AMG, but its runner-up status shows how quickly this part of the market is developing.

The pioneering Mercedes-AMG SLS Electric Drive was launched in 2014, when its 738bhp peak output was deeply impressive and its claimed 120-mile range was pretty respectable for an off-the-shelf EV. It also cost £355,000 and, unsurprisingly, AMG produced only a handful of them.

The 328V battery supports AC charging at rates of up to 22kW and DC charging at a searing 170kW if you can hook it to a sufficiently potent device. That will give up to 112 miles of range in just 15 minutes

Eight years later, AMG is launching another EV, the EQE 53, which makes 617bhp in standard form and up to 677bhp (briefly) when equipped with the AMG Dynamic Plus Package, has a range of up to 321 miles under WLTP rules and comes with the extra practicality of four seats and luggage space. UK pricing hasn’t been confirmed, but we’re told to expect it to be around £115,000 – less than a third of the cost of that SLS.

But the Mercedes-AMG EQE’s arrival raises another question. How, beyond raw performance – of which this car and its bigger sibling, the Mercedes-AMG EQS 53, have a super-abundance – will the tuning division distinguish its EVs from the regular Mercedes versions on which they're based?

There's certainly no shortage of power. The EQE 53 uses the same 90.6kWh battery as the EQE 350+ but gets two more powerful AMG-specific electric motors featuring new windings and the ability to handle more current. AMG claims a 3.4sec 0-60mph time for the regular EQE 53 and 3.2sec when the car is fitted with the Dynamic Plus Package, which adds launch control – figures that, if delivered, will make this sizeable electric saloon one of the fastest-accelerating models the Mercedes clan has ever produced.

Production of 1049bhp Mercedes-AMG One hypercar begins in UK

Production of 1049bhp Mercedes-AMG One hypercar begins in UK

Styling of new AMG GT is likely to be evolutionary, as depicted in our artist's impression 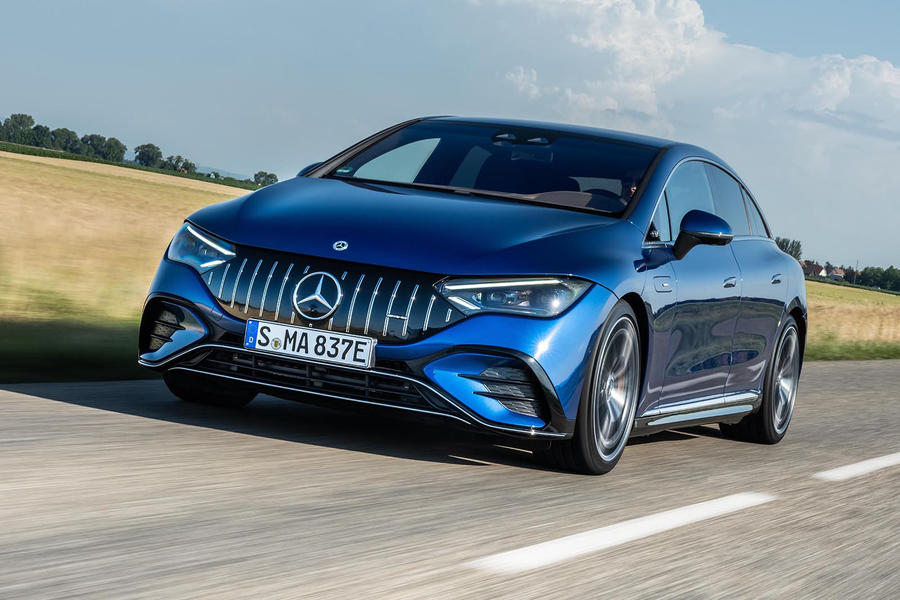 On many levels, the EQE 53 is deeply impressive. Its performance feels every bit as serious as the numbers suggest: the car can deliver the sort of forces that relocate internal organs and cause passengers to squeal involuntarily. Peak power is restricted in less aggressive dynamic modes, to 308bhp in Slippery, 493bhp in Comfort and 555bhp in Sport. The full 617bhp is available in Sport+ only, with the overboost to 677bhp coming only when using the Race Start launch function. But across the board, it feels hugely fast.

As with other potent EVs, performance is about response as well as pure power. The EQE 53’s accelerator is better regarded as a fader switch for longitudinal g-force than a conventional throttle, because there's no gap between adding pressure and feeling the response. The lack of an engine’s mechanical inertia or a gearbox’s need to shift gives it short-notice pace that even the most potent supercar wouldn’t be able to match.

Despite the EQE 53’s porky kerb weight of 2600kg, its standard air suspension maintains impressively good body control over everything from a gentle schlep to being thrown along a mountain road. Much of the mass is in the low-mounted battery pack, and the low centre of gravity can certainly be felt in the way the EQE 53 turns and changes direction. There is a small amount of discernible lean under harder progress, but AMG engineers say there isn’t an active anti-roll system because there's no need for one.

The ride stays composed even when the chassis is asked to deal with big vertical movements and cruising refinement in the gentlest mode, Comfort, is excellent. 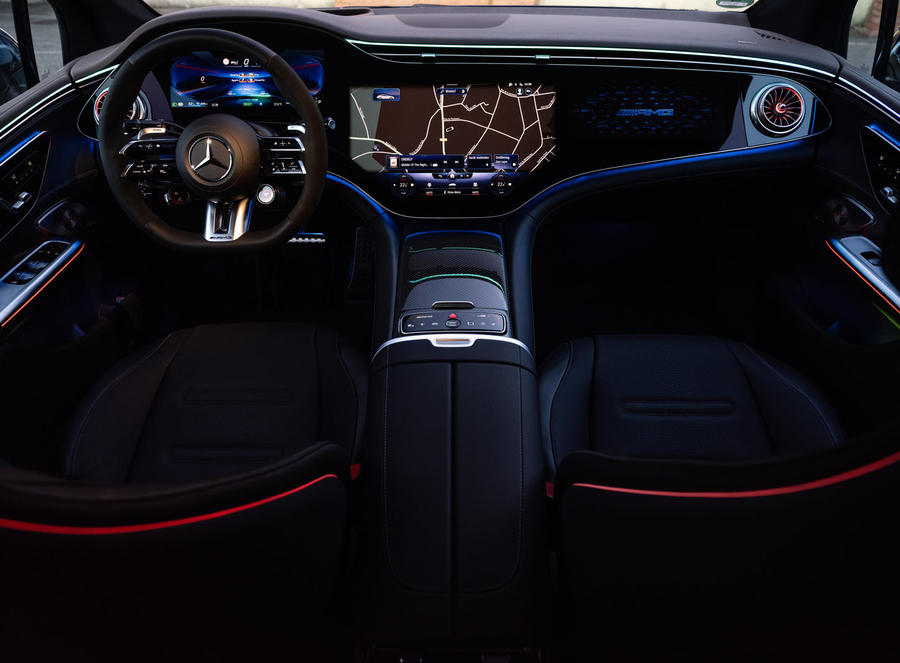 The EQE’s mass can be felt when asking it to turn into tighter corners, and on some of the narrower and twistier roads I drove the car on, it did start to feel big and heavy. But on wider roads, the stability control’s more permissive Sport mode gives an obvious rearward bias to the four-wheel drive system’s torque delivery and helps wake up the chassis.

And while AMG’s decision to offer carbon-ceramic brakes as an option might seem like overkill, given the car can harvest up to 260kW of regenerative energy, the speeds that the EQE 53 can register on even the smallest straight made me glad of their presence.

So the 53 is a hugely fast and impressively composed EQE, but it's hard to nominate any qualities that make it an AMG. The most obvious of these is the one the division seems proudest of: a sound symposer system that plays a generated noise both internally and externally through speakers, the sound altering in volume and pitch according to the vehicle’s speed and the position of the accelerator. It even plays an idlelike throb when the car is stationary. The sound isn’t trying to replicate an engine but has various futuristic elements instead. I reckon I heard both light sabres and jet engines at different stages. 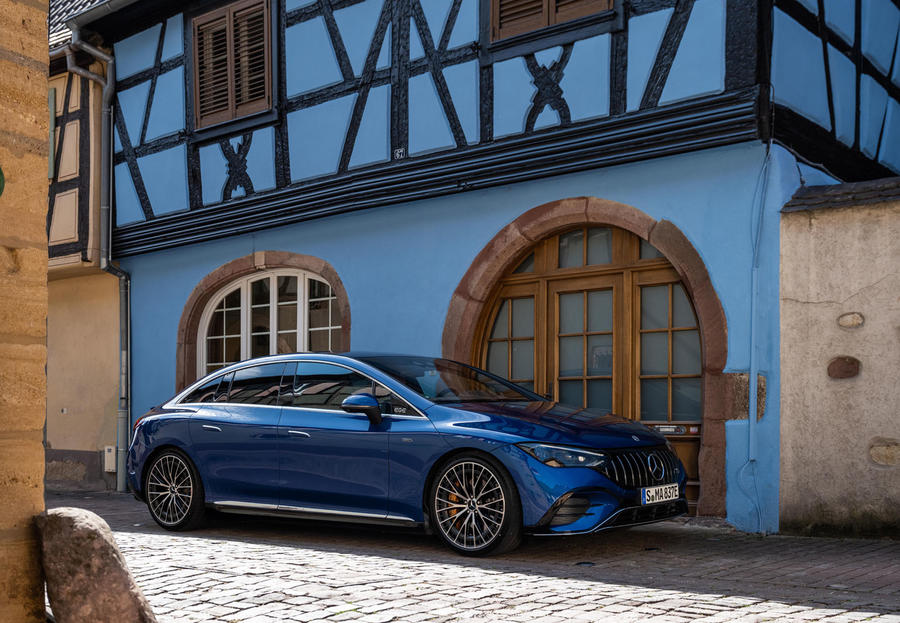 The problem for me is that it just didn’t work. As with other artificial symposers, it felt like a gimmick, obviously fake. A brain will happily accept the noise of a combustion engine, even when it has been digitally augmented and filtered. But completely artificial sound creates more of a credibility chasm than a gap, and in this instance it was turned off within minutes every time I steeled myself to give it another go. Which left me in a much faster, slightly firmer EQE but not necessarily one that felt like an AMG-flavoured EQE.

The EQE 53 impresses as a piece of engineering rather than at the level of visceral emotion that normally comes with AMG branding, and a similar conclusion will probably await the less powerful EQE 43 when we test it. While it might seem unfair to criticise any EV for being quiet and refined, it's the paradoxical situation created when a division most obviously associated with noise and excitement builds one. That’s a problem, I suspect, that some of the industry’s biggest brains are keenly trying to find an answer for.