Long promised, the electrification of Mercedes-AMG’s engines begins here. The new GT 63 S E Performance 4-Door Coupé is the first plug-in hybrid (PHEV) by Mercedes-Benz’s performance division, and with 831bhp (a significant 111bhp more than the raucous Mercedes-AMG GT Black Series two-door), it also holds the distinction of being the most potent AMG yet.

The luxurious liftback builds on the Mercedes-AMG GT 4-Door Coupé that was launched in 2018. Its brawny twin-turbocharged 4.0-litre V8 petrol engine has been combined with an electric motor integrated into the rear axle, in an electrification process that AMG’s chief technical officer, Jochen Hermann, says we will see a lot more of in the not-too-distant future.

Off-the-line acceleration is every bit as savage as that of the latest electric performance cars in Race mode. What sets it apart is its wonderfully characterful exhaust
Greg Kable | European editor

Operating at 400V, the motor adds 201bhp to the 630bhp of the engine, lifting power well beyond that of the rival Porsche Panamera Turbo S E-Hybrid (690bhp), as well as traditional super-saloons like the BMW M5 Competition (616bhp).

It’s the torque that benefits the most, though, climbing from an already potent 663lb ft to a considerably more serious 1082lb ft. The decision to mount the motor at the rear allows its drive to be channelled directly to the rear wheels via a two-speed gearbox. The engine, meanwhile, sends its reserves to all four wheels via the nine-speed Speedshift MCT automatic gearbox of the GT 63 S.

There are six driving modes: Slippery, Electric, Comfort, Sport, Sport Plus and Race. The Drive Dynamic controller also supports an Individual mode that allows you to tailor various aspects of the car.

Electricity is provided by a liquid-cooled 6.1kWh battery of more than 560 cylindrical cells, mounted atop the electric motor at the rear. Unique to the GT 63 S E Performance for now, it’s claimed to have twice the power-density of the various batteries used by conventional Mercedes PHEVs. Charging, via a port on the right-hand side of the rear bumper, can occur at rates of up to 3.6kW on an AC system. Owing to the relatively small capacity of the battery, faster DC charging isn’t supported. 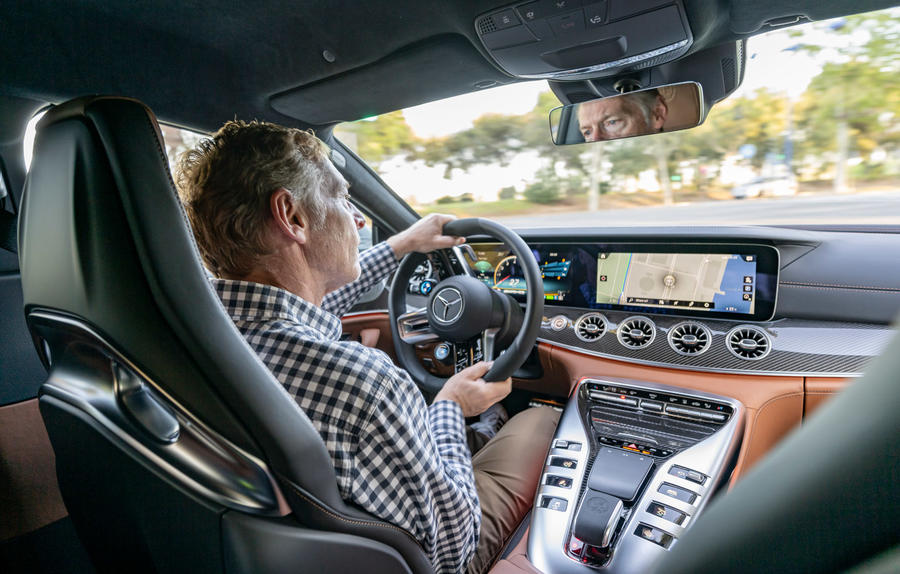 When fully charged, it can drive only 7.5 miles on electricity alone, and combined fuel economy is just 35.8mpg on the WLTP test for high overall CO2 emissions of 180g/km. “The focus is very much on performance,” explains Hermann. “We have electric capability, but range wasn’t a big priority for us.”

In terms of character, the GT 63 S E Performance doesn’t feel a lot different to the GT 63 S. Step-off is very strong when both powerplants combine, rabidly so in racier modes. The characterful engine delivers abundant performance along with a terrifically vocal soundtrack, with cracks and pops on the overrun.

While the motor can give 201bhp for short bursts, it’s programmed to offer a milder 94bhp of continuous boost. There’s huge flexibility, imbibing smooth and outstanding refinement in everyday driving.

Open-road cruising is effortless. Response is great and there’s always plenty in reserve for reassuring surges during overtaking. In this respect, the car is both entertaining and wonderfully accommodating. What you will really want to do, though, is find a race track with a long straight and dial up Race mode. Largely unshackled from its various assistance systems, the car provides mesmerising performance. 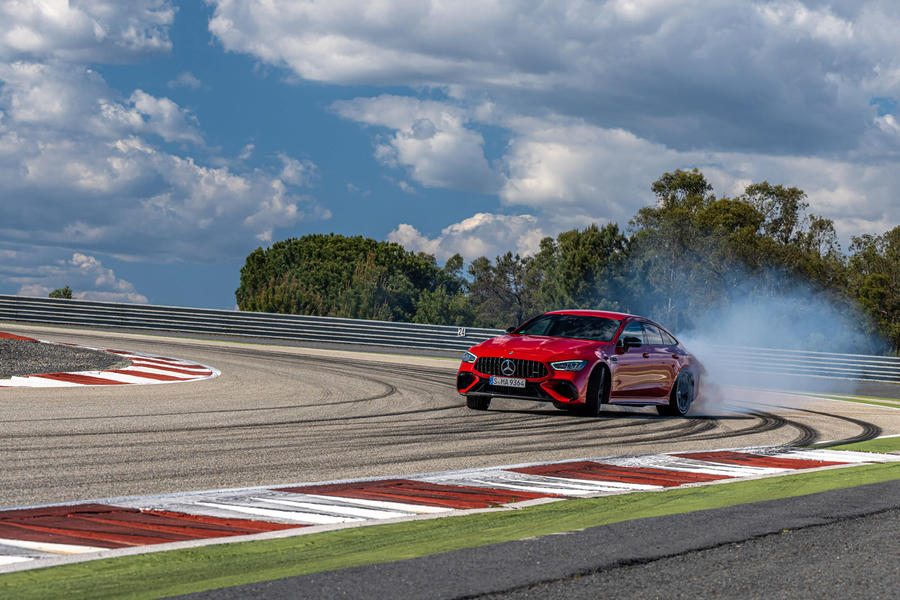 The motor was developed for far more rapid power deployment than those of normal Mercedes PHEVs. So rather than merely boosting the reserves, it also brings an added degree of response to the delivery.

The way this five-metre-long, 2.3-tonne car surges off the line and continues to gather pace well on the way to 200mph is really quite extraordinary. It’s more sledgehammer than hammer. The integration of the engine and motor is outstanding, as is the ability of the four-wheel drive to deploy it all.

Sophisticated energy recuperation also lets the battery charge on the go by using the engine as a generator. A lap or two of gentle running is all it take to top up the energy reserves in readiness for a full-out attack. There’s an underlying firmness to the ride, even in Comfort mode.

However, bumpy roads are dealt with authoritatively by the quick-acting adaptive dampers, which provide excellent shock absorption at speed, helping the car settle quickly when challenged by broken bitumen.

What you do feel, though, is pronounced sensitivity on coarse surfaces. Large contact patches and resulting tyre roar can take the edge off the otherwise impressive touring qualities on less-than-smooth roads.

The steering is very responsive off centre, giving the PHEV an inherent sharpness very similar in character to its ICE sibling. For such a big and heavy car, it changes direction eagerly and incisively. There’s typical heft to the electromechanical system and some welcome feedback, too.

There’s quite a bit of body movement when you dive into a more tightly apexed corner, but it’s exceptionally well controlled. Lean builds progressively from the instant you begin to turn in, so you’re always well aware of the approaching limits.With drive going to all four wheels, the standard Michelin Pilot Sport 4 tyres find huge amounts of grip.

Added response and engagement can be summoned through the Sport, Sport Plus and Race driving modes. So configured, the GT 63 S E Performance feels predominately rear-biased. As such, it’s good fun. You never really lose sight of the weight brought on the motor, battery and power electronics; but the car offers astonishing acceleration and is imminently adjustable on throttle.

The constantly variable qualities of the 4Matic+ system, which differs in set-up to that on regular Mercedes cars, ensures drive goes quickly to the front when the car starts sliding, giving it reassuring neutrality, even when the stability control is relaxed. Interestingly, the packaging of the motor and battery at the rear has improved weight distribution, taking it from 54:46 to a perfect 50:50.

“The PHEV isn’t quite at the level of the ICE model for outright dynamic prowess, but the overall balance has been improved by adding weight at the rear,” Hermann says. The brakes are 420mm front and 380mm rear carbon-ceramic discs with big Brembo calipers. They’re immensely powerful, but the inclusion of four-stage regenerative braking (operated via the drive selector) has robbed them of feel. When switching between driving modes, you occasionally notice the pressure within the brake pedal alter. 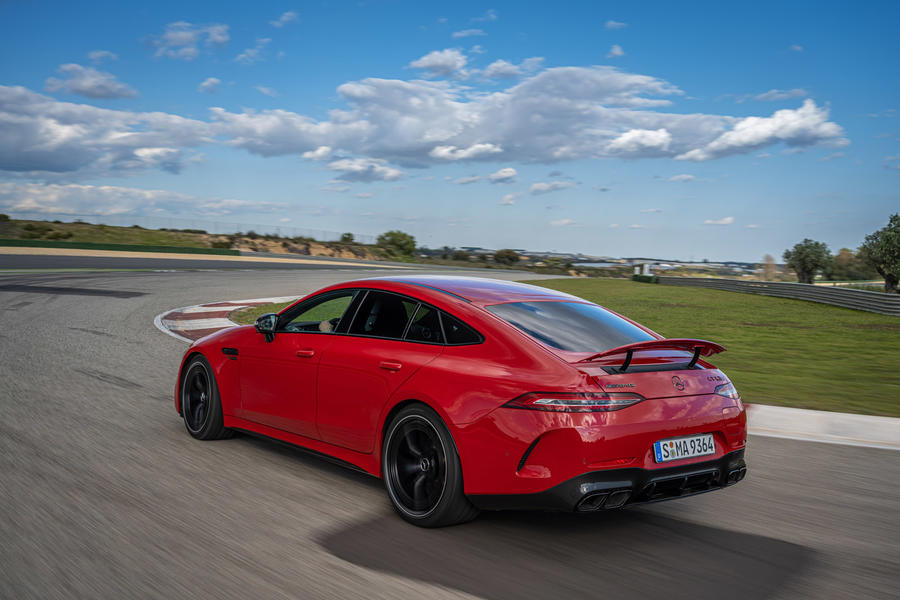 At £173,655, the PHEV will set you back £31,800 more than the ICE car, and it will take trained eye to spot your extra investment. Changes to the exterior design are restricted to a lightly altered front bumper, new badges and uniquely styled 20in (or optionally 21in) alloy wheels; and it’s a similar story inside, where the only real giveaway is a new digital readout within the digital instrument panel.

That doesn’t really matter, though, because electrification has brought a new dimension to what was already a highly capable performance car, ratcheting up the excitement and accelerative ability without any real detriment to its dynamic character or overall comfort.