From £36,0758
New PHEV option arrives alongside a welcome cabin overhaul to sustain the allure of Lexus’s best-seller into its second generation
Open gallery
Close

Judged on the image at the top of this page, you’d be forgiven for writing off the Lexus NX’s transition to a second generation as no more dramatic than your average mid-life facelift.

Indeed, save for the addition of a new rear light bar, a spelled-out badge across the bootlid and subtly reworked side detailing, there’s little to mark this out as the latest version of Lexus’s biggest-selling European car. And that’s probably not bad news for those in control of the company coffers; in the UK alone, the outgoing NX – even at seven years old – accounts for roughly a third of the brand’s sales so far this year, outselling the larger Lexus Lexus RX by a ratio of about 3:1.

So, outside at least, this is a classic case of evolution over revolution – even though 95% of the components on this car are new. Parked up against the outgoing Lexus NX, the restyled creases and overhauled front end are more obvious additions, but you still might miss the shorter overhangs, 20mm increases in length and width and extended tracks on both axles – significant changes that result from the NX’s switch onto parent company Toyota’s new GA-K platform, as used for the indefatigably popular Toyota RAV4 and its technically identical Suzuki Across cousin.

As well as bringing the centre of gravity down by 20mm and increasing overall stiffness by 30% for improved dynamics, this new platform provides the NX with its first (and, indeed, Lexus’s first) plug-in hybrid powertrain. Familiar from the RAV4 PHEV, the system pairs a 2.5-litre petrol engine with a 180bhp electric motor on the rear axle, and another with 54bhp at the front for a total output of 305bhp, while an 18.1kWh under-floor battery endows the crossover with an EV range of 43 miles. The entry-level Lexus NX 350h, with a familiar but upgraded version of the outgoing car’s full-hybrid system, will also be offered.

We’ve driven a left-hand-drive early production car in range-topping F-Sport trim ahead of customer deliveries getting underway in the second quarter of 2022. 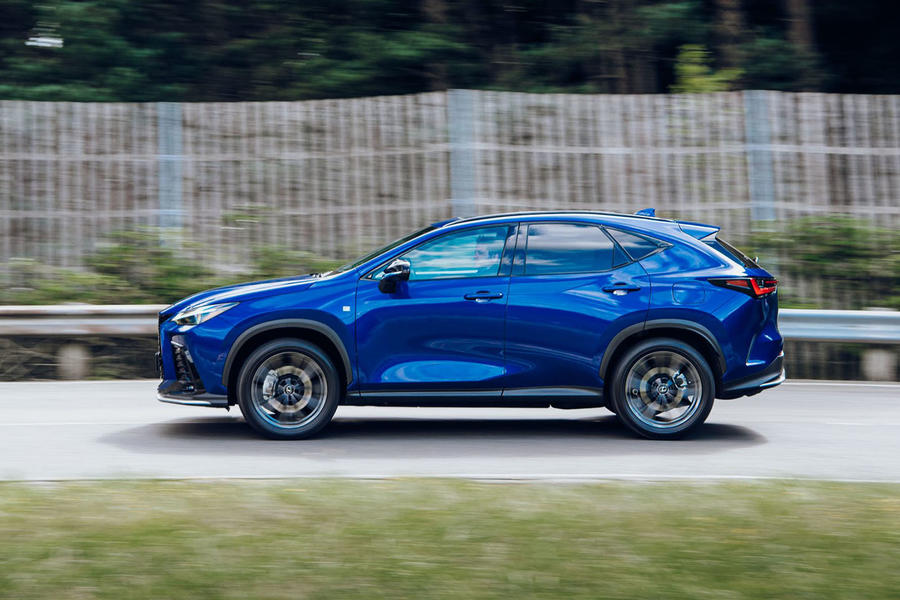 Here, as we’ve found in its less overtly premium siblings, the PHEV drivetrain remains subtly effective and impressively economical; step-off in electric mode is predictably swift and seamless, and though the petrol motor verges on the gruff side when it cuts in, there’s little tangible change in the way the NX covers ground, the CVT gearbox providing similarly linear accelerative characteristics – only with an inevitable droning soundtrack.

A 0-62mph time of 6.3 seconds makes the NX 450h+ one of the fastest crossovers of its kind, and though the optimistic 257mpg-plus economy rating will never appear on the dash, driving sensibly and allowing the system to switch between EV and petrol power as it sees fit should net a figure in the mid-40s, which isn’t bad going. The estimated EV range figure seems accurate, too, and it’s important to note that even with the battery depleted, the NX 450h+ reverts to operating as a ‘self-charging’ hybrid, meaning short distances at low speed can be covered with the engine off.

Aside from the adoption of plug-in power, the new NX is most radically differentiated inside, where Lexus’s new ‘Takuna’ (which translates roughly to ‘the reins of a horse’) design ethos has ushered in a new driver-centric cockpit layout, with an expansive touchscreen (9.8in as standard, 14.0in on higher specifications) and all other controls positioned for minimum distraction on the move. The most welcome part of the revamp is the integration of a new operating system which is said to be 3.6 times faster than that in the outgoing car. Certainly, its clean-cut interfaces and slick processing times tally with the NX’s premium billing, and help bring it into line with the class best.

Whether the NX makes good on its maker’s promise to deliver the ‘Lexus Driving Signature’ is up for debate. Lexus explained that although the suspension geometry remains the same as other GA-K-based cars, it has “re-evaluated” the components for strength and rigidity – and called upon the services of professional racing drivers to give dynamic feedback during the development process. The result? Well, there’s a pleasing degree of elasticity to the steering, which accommodates – if not encourages – an enthusiastic approach to turn-in, but hard cornering sets the suspension rocking and getting on the power mid-bend is a sure-fire recipe for understeer.

Obviously, though, despite its dynamically-led styling, the NX will never be bought off the back of its credentials as a canyon carver, and though it is certainly quick off the mark, this is not a car you will ever feel inclined to push to the limit. But loyal buyers will still be impressed by its generally unflappable treatment of knackered British Tarmac. Any wallowing over undulations is far from overbearing, and imperfections are dealt with smoothly and quietly, with just a hint of a jolt through the wheel and seat over the worst chasms. 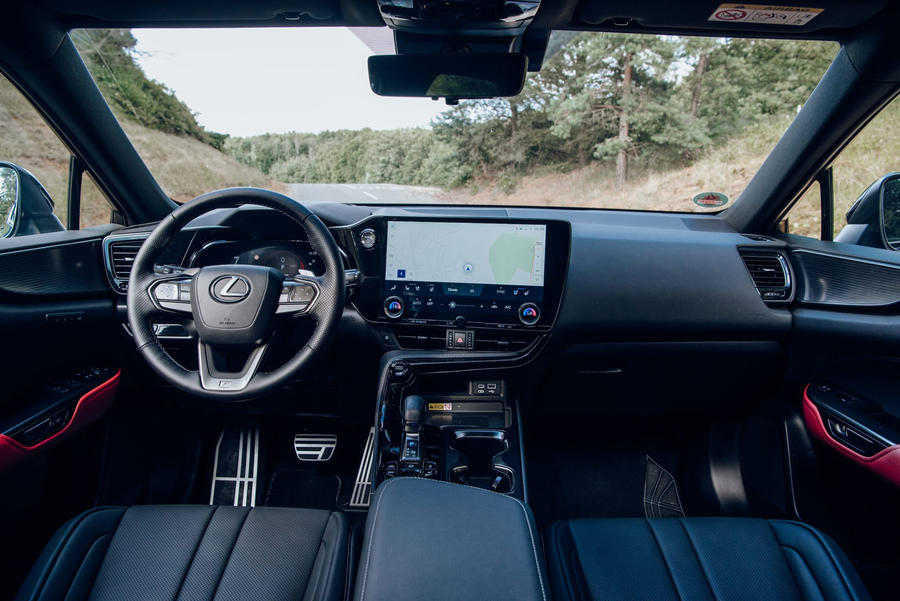 This F-Sport car comes in at a hefty £54,800, which sounds a lot but compares favourably with rivals and feels more realistic the more time you spend in the revamped NX. This is a thoroughly modern and tastefully engineered proposition, with its own distinct character from its platform-mates and impressive performance statistics.

It's not a driver's car, but it doesn't need to be, and given the success of its predecessor - with its comparatively clunky infotainment system and lack of a plug-in option - it can only be on the up. 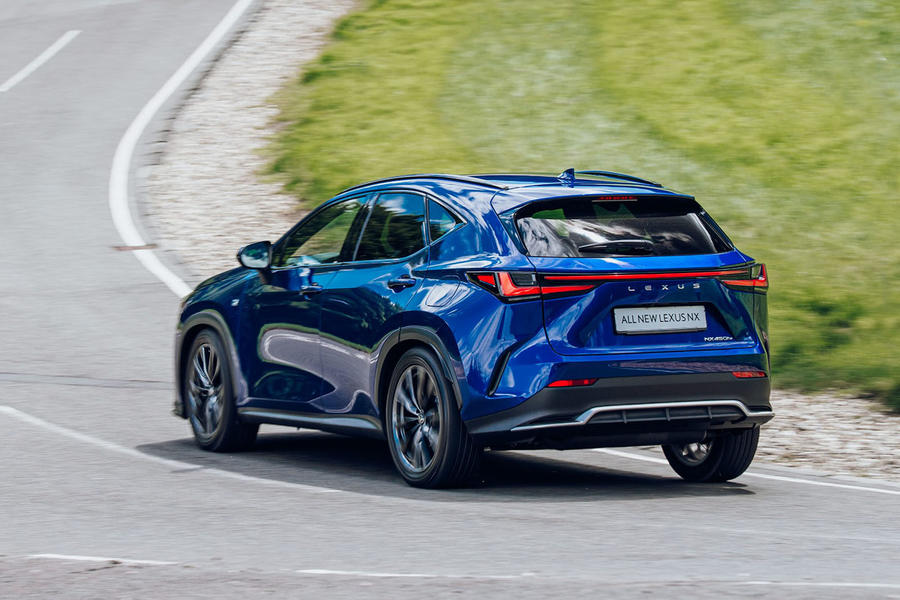