The XC60 T6 Recharge is one of quite a number of plug-in hybrid cars suddenly being offered by Volvo.

With at least one PHEV option in every model line that it makes and in many cases more than one, the Swedish car maker is now better placed to thrive than the majority of its competitors as buyers look to electrify their next new car. Given that last year was the best that Volvo has had for UK sales in nearly three decades, it seems that the firm’s emissions-cutting electrification agenda is already doing the business.

There are no fewer than three plug-in hybrid versions of Volvo’s mid-sized family 4x4, the Volvo XC60. They all use the same 11.6kWh drive battery, which is carried along the transmission tunnel; and they all have the same 87bhp, 177lb ft primary electric motor, which is packaged under the boot floor and drives the rear axle. But while the T8 and Polestar Engineered versions have more highly tuned engines with both superchargers and turbochargers for induction, this T6 version uses a simpler turbocharged 2.0-litre motor that’s connected to the front wheels and provides drive for the car either after the drive battery is depleted or during hybrid-mode running.

The XC60 T6 Recharge, then, is the cheapest of three electrified derivatives although, with prices starting a whisker above £50,000, it’s still not exactly cheap. It costs about £8000 more than a like-for-like XC60 mild-hybrid petrol or diesel, and it’s also priced a little above several of its direct rivals from the likes of BMW and Land Rover. Fleet drivers who pay benefit-in-kind tax ought to be the ones for whom the car’s ownership case may be easiest to build, but even for them, its rated CO2 emissions and all-electric range may not earn it top-of-the-shopping-list billing. 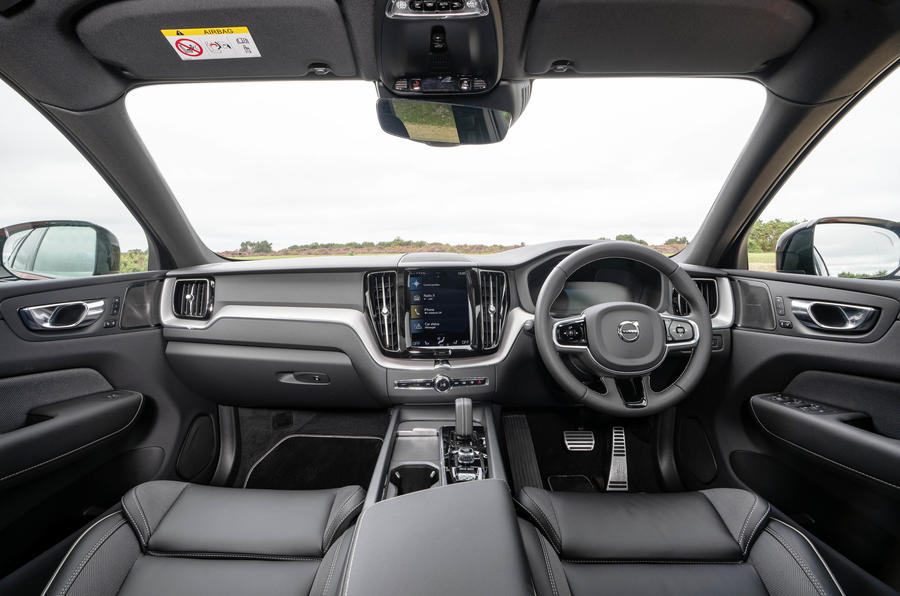 Good looking, spacious, easy to drive and, for the most part, nice to travel in. The interior is very pleasant and has good apparent build quality, and both the digital instruments and portrait-oriented infotainment system are fairly easy to get on with.

It’s a bit of a liberty, frankly, that Volvo’s Sensus Connect touchscreen set-up doesn’t include smartphone mirroring as standard on a £50,000 car; and because it doesn’t work like most other touchscreen systems you might have experienced, that system takes a little bit of time just to get comfortable with. You’ll get there soon enough, though; and, once you have, any particular safety system adjustment or deactivation typically takes only a swipe and a prod of your finger.

Practicality in the XC60 is good, although the tunnel-mounted battery of the T6 does oblige any middle-sitting fifth occupant to sit with their legs astride it somewhat. Boot space is almost entirely unaffected by the hybrid system, although you lose out on a bit of underfloor storage.

As we’ve observed of other T6 Recharge derivatives, this hybrid powertrain seems to gain more on quietness and isolation than it really loses on performance as a result of shedding its supercharger; and anything you can do to make a big Volvo quieter and more relaxing is a thing you should probably do, in this tester's opinion at least.

The XC60’s directly driven electric rear axle makes it work particularly well in urban environments, where it has more than enough outright urge and good general drivability, so you can nip up from rest to 40mph pretty smartly and without falling back on the combustion engine. The zero-emissions driving mode – dubbed ‘Pure’ – seems to free up a little more electric urge than it has in Hybrid mode, likely because only then does the front-mounted 46bhp starter-generator motor switch to a driving (rather than power-generating) general operating mode and to help out the one at the back. But even in Hybrid mode, you’ll find you only really wake the car’s combustion engine when you really need it.

The lab test electric range for the car is 33 miles, but it can drop a bit if you go for a car with bigger wheels and lots of heavy optional extras. During our testing (on a mix of town and country roads), it averaged 25 miles before the drive battery ran out, which is decent although not outstanding for a PHEV of this type. When it comes to recharging, meanwhile, there’s no DC rapid charging compatibility here and the AC charging rate is pegged at 3.7kW, so a full charge will take a little over three hours wherever you happen to be plugged in. That, too, could be better.

Electric-only performance out of town is a little bit less impressive than within the urban environment. When you ask more of the car than the electric motors can supply, the combustion engine can seem slightly flustered and unresponsive; a bit slow to start, and equally reluctant to kick down through the gears, depending on your selected driving mode.

In a bid to keep things simple, as is so often its want, Volvo doesn’t give you manual shift paddles for the eight-speed gearbox, or a seperate ‘S’ mode for gear selection. There’s only a ‘B’ mode as an alternative to ‘D’, which blends in more electric-motor regenerative braking on a trailing throttle. For these reasons and others – although not because it feels slow in outright terms, to be fair – this is a car that’s at its best when it’s ambling along fairly unhurriedly. The combustion engine is refined and quiet when it’s working away in the background, and part-throttle response is quite a bit stronger and slicker than the full-throttle kind.

Both rolling refinement and ride comfort in our test car – an R-Design trim example with lowered sport suspension and 19in wheels as standard – were just a little bit poorer than the premium family SUV class average. Although composed enough on better surfaces, the XC60’s close body control felt under-damped, making it a bit unwilling to settle, on less even Tarmac, and it was slightly too quick to roll when changing direction. Potholes and drains also brought more noticeable 'bump-thump' out of the car’s secondary ride than you’d likely want in your big, family-friendly, do-it-all wagon.

Moderately paced but over-assisted, elastic-feeling steering makes for handling that, while grippy and secure, doesn’t allow the XC60 to feel too precise and engaging when driven quickly. If it were mine, then, I’d either avoid R-Design trim in order to stick with the confusingly titled, longer-travel Dynamic Chassis suspension of the entry-level T6; or go with an R-Design and spend extra on Volvo’s Active Four-C adaptively damped air suspension system. 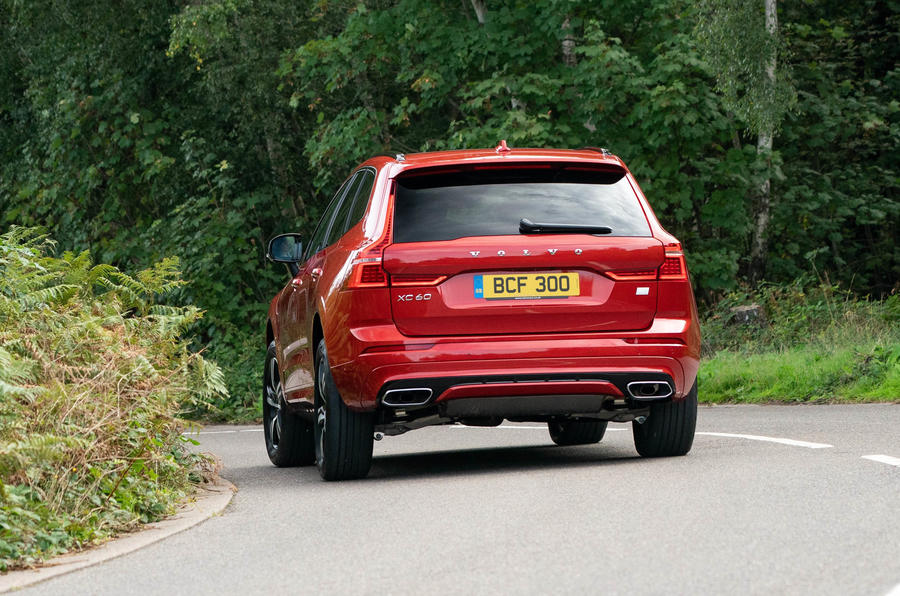 In spite of the slightly high price, I reckon plenty will. Like so many Volvos, the XC60 offers a really appealing alternative take on a modern, premium-brand family SUV. It looks great and has a cabin that still seems so simply laid out and is refreshing on the senses. Those qualities – combined with the safety-conscious, socially responsible and extra-mature lustre that the Volvo brand has taken on these days – will do a lot for it.

To those who just want the best plug-in hybrid option in the class at the most competitive price, there are one or two rivals I would recommend test driving first. But if your mind’s pretty much made up already, whatever your reasons may be, you’ve got little to lose here on a car with a well-chosen specification. 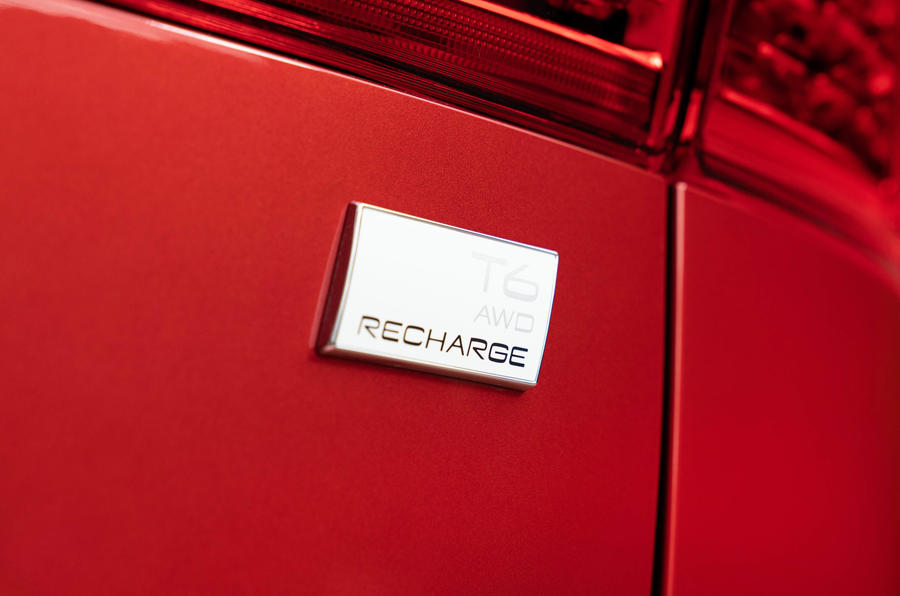 I'd imagine this new model will be greeted with admiration from the Volvo buyers out there.

Especially, the bit about 112MPH max. A sensible choice, watch out for the acceleration mind!