BACK TO ALL NEWS
Currently reading: New 2021 Lexus NX: firm's first plug-in hybrid brings 302bhp
UP NEXT
How Max Chilton and the McMurtry Speirling conquered Goodwood

The second-generation version of the Lexus NX crossover has gained a 302bhp plug-in hybrid option along with a bold new cabin design and evolved exterior styling.

The latest iteration of Lexus’s best-selling model in Europe arrives shortly after the brand’s announcement that it will ramp up its electrification efforts with 10 new hybrid, PHEV and pure-electric models by 2025.

The new NX forms a key part of that assault, bringing with it the NX 450h+. This is the first PHEV offered by Lexus, which has previously used parent company Toyota’s ‘self-charging’ hybrid technology for its electrified powertrains.

The NX 450h+ uses the same petrol-electric set-up as the closely related Toyota RAV4 and Suzuki Across SUVs. It pairs a 182bhp 2.5-litre naturally aspirated four-cylinder petrol engine with a 180bhp electric motor on the front axle and a 54bhp motor at the rear for permanent four-wheel drive and a 0-62mph time of just over 6.0sec.

With the electric motors drawing their reserves from a floor-mounted 18.1kWh lithium ion battery, the NX 450h+ claims an electric-only driving range of 40 miles and can run with the petrol engine off at up to 84mph. When the battery is depleted, the system operates like a conventional Lexus ‘self-charging’ hybrid, which is said to make it 20% more efficient than rival PHEV SUVs.

Overall, Lexus estimates CO2 emissions of less than 40g/km and an efficiency rating of more than 94mpg for the PHEV. 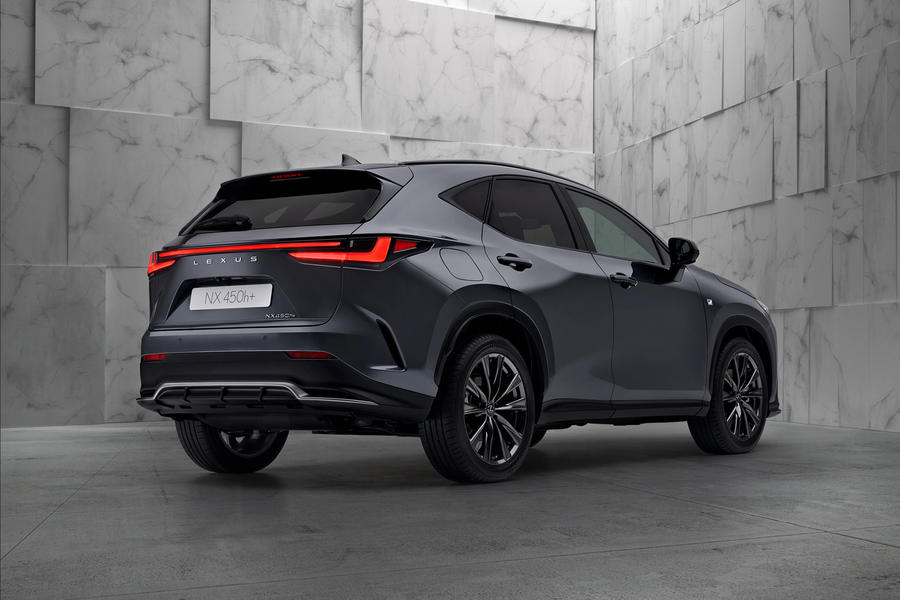 The second available new NX variant in the UK will be an evolved version of the NX 350h hybrid, which is said to be 22% more powerful, emit 10% less CO2 and be 15% quicker than the current model. The electrified 2.5-litre four-cylinder sends 239bhp to either the front or, optionally, both axles, enabling a 0-62mph time of as little as 7.7sec and a towing capacity of 1500kg.

With a 20mm-lower centre of gravity, increased track width at each end and a better weight balance than before, the NX is claimed to deliver the “Lexus driving signature”.

New body materials and welding techniques mean the shell is stiffer, and professional racing drivers were involved in the development process to measure accelerator and brake responsiveness.

Just as important for the crossover is its revamped interior: the NX is the first production car to feature Lexus’s new Tazuna cockpit design, previewed in 2019 by the radical LF-30 concept.

With a focus on “giving the driver direct, intuitive control of the vehicle”, the NX aims to promote confidence and usability. Core functions are controlled using touch-sensitive buttons on the steering wheel, for example, and the dashboard curves towards the driver’s seat for improved control accessibility and visibility on the move. 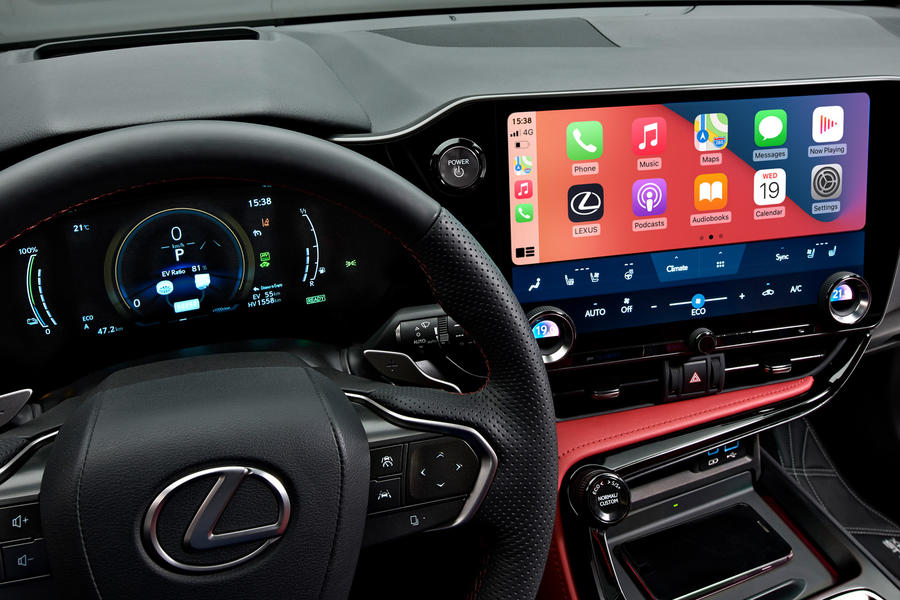 The new optional 14.0in touchscreen (up from 9.8in as standard) is said to be among the largest in its segment and is powered by a CPU that’s 3.6 times faster than the one in the outgoing NX. It runs an all-new operating system that introduces ‘smart services’, including live journey and traffic information, as well as a new ‘Hey Lexus’ voice control function.

Lexus claims the new NX makes improvements in space, comfort and quality over the current car, thanks to the use of “high-quality materials” and new functions such as electronic door releases, a personalised welcoming light sequence and cabin pre-conditioning via the Lexus Link smartphone app.

Prices will be announced after the summer, with the new NX due to arrive in dealerships towards the end of the year. Lexus has hinted at approximate price parity with today’s car, so expect a starting price of around £36,000.

Log in or register to post comments
FrozenDung 13 June 2021
Oh god how will Toyota's customers plug this car in????

It's extremely hard I have heard them say :O

Reading more, despite keeping the look, its entirely new so no doubt packaging improved and yes the touch pad is gone. Also some nifty tech, won't let you open the door if its into the path of a car or cyclist, remote control parking from your phone.

The Apprentice 12 June 2021
Amen to the trackpad comment! Tested the NX and it was nice but the old generation powertrain let it down, it was hugely more thirsty than the new RAV4, mine does well over 50mpg every day.
The PHEV is going to be a big problem for Lexus. With the RAV4 at 47K and Lexus supposed to be more luxury how are they going to price it? Even the RAV PHEV is priced off many company car lists already, the customers its specifically aimed at! No point making 55K NX PHEV tax dodger and fleet managers leave it off the list.
Also the NX needs a rethink, its packaging is poor, for the size it is, cabin is snug and boot poor (even if it does have beautiful lashing hoops)
View all comments (4)