Autocar rather likes the Kia Sportage, and given one was sold every 69 seconds last year, so do many European drivers.

To maintain the appeal of this mid-sized SUV, a midlife refresh brings not only aesthetic refinements but also updates to the infotainment system and a gamut of safety technologies.

They are subtle changes, mind. The foglight housings are new and are joined by gloss black and chrome trim within the redesigned front bumper. The ‘tiger nose’ grille has been developed a fraction, while new full-LED headlights feature four-point daytime running LEDs that ape those found on Porsche’s latest-generation models.

Inside, there’s a new steering wheel and instrument cluster, and the ventilation controls have been redesigned (although they still have an oddly puerile look to them). Depending on specification, you’ll get either a 7.0in or 8.0in touchscreen display that’s satisfactorily sharp, and even entry-level models come with Apple CarPlay and Android Auto smartphone connectivity.

The engine line-up has also been tweaked to conform to Euro 6d TEMP emissions standards. Available in either naturally aspirated (128bhp) or turbocharged (171bhp) form, Kia’s Gamma direct-injection 1.6-litre petrol now has an updated particulate filter, and the old 1.7-litre CRDi turbo diesel is replaced by a new 1.6-litre unit tuned to 112bhp or 131bhp. These engines are mated to either a seven-speed dual-clutch or six-speed manual transmission, driving either the front or all four wheels. 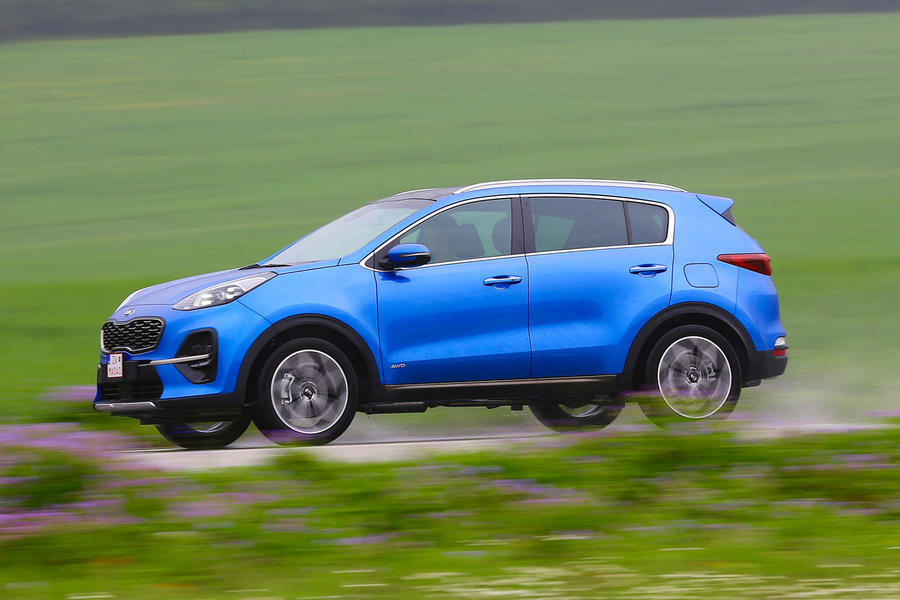 All of these changes are, perhaps, insignificant developments relative to the debut of the new electrified powertrain we’re talking about here. You’ll find an almost identical version in the Sportage’s Hyundai Tucson sibling, which we’ve already driven.

It takes the form of a range-topping mild hybrid similar in principal to those seen on a raft of new models from premium manufacturers such as Audi, with the efforts of a 2.0-litre turbo diesel engine assisted by those of a compact starter-generator unit belt-connected to the crankshaft.

Power for the 48V Ecodynamics+ system comes from a small lithium ion battery mounted beneath the boot floor — undoutbtedly eating into boot space, although Kia hasn’t yet said by how much — and the 13bhp electrical boost it facilitates takes the Sportage’s total output to a healthy 195bhp.

Lift off the throttle to coast, or use the brakes, and starter becomes generator, recharging the battery with energy than would otherwise dissipate in the form of heat. Kia has also yet to confirm the car’s WLTP fuel economy, although it claims the technology helps to effect an improvement of up to 4%.

That’s an incremental gain, admittedly, although the hardware itself is compact enough to require almost no repackaging of the engine bay and is relatively inexpensive to install. As such, it will propagate through Kia’s model line-up in the near future.

In any case, during a short stint of motorway driving, our test car returned a touring economy of roughly 52mpg, which is good for such a large and relatively powerful car. Were it not for the car’s ability to shut off its engine entirely on the move (not that our test car at any point did so), in practice you’d be hard-pushed to detect the presence of hybrid hardware. Throttle response isn’t notably sharp and neither is the car conspicuously slowed off-throttle by the regenerative element of the powertrain.

In short, it feels normal, although this is a memorably smooth powertrain — well isolated until you exercise it in a way few owners will — and reassuringly potent. Of course, neither has much to do with the electrical element.

Elsewhere, this all-wheel-drive Sportage rides well — albeit a touch firmly, and with a slight jostle, perhaps as a result of increased spring rates — and steers predictably, although it never feels in possession of anything other than a lofty centre of gravity. Grips levels are nevertheless good, and together with an elevated, comfy driving position help to make hasty progress a painless task. 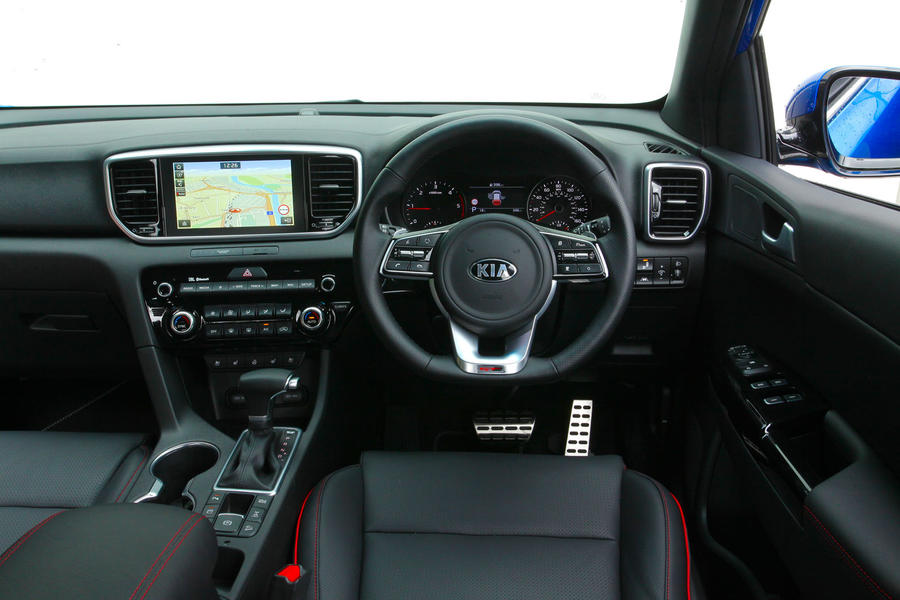 On the merits of the hybrid hardware? Probably not. The technology appears to be well integrated but longer-term testing is needed to get the measure of any real-world benefits.

And, frankly, those looking to save money on fuel would be better off first considering the new, non-hybrid 1.6-litre diesel. In similarly fancy GT-Line S trim, it costs roughly £3k less than the hybrid variant (which, for now, is only available in the two highest trim levels) and achieves a combined 57.6mpg on the WLTP cycle. You’d sacrifice a measure of performance, but given this is family transport we’re dealing with, for many that’s unlikely to matter.

Looking at the bigger picture, we suspect this technology might work better on less powerful, more accessible Sportage variants — not least the petrol models for whom 13bhp instantaneous horsepower, while modest, might have a more striking effect not only on fuel economy but in filling out the torque curve.

Given this mild hybrid system is compatible with both a manual transmission and front-wheel drive, we doubt Kia will have us waiting too long to find out whether that is indeed the case. 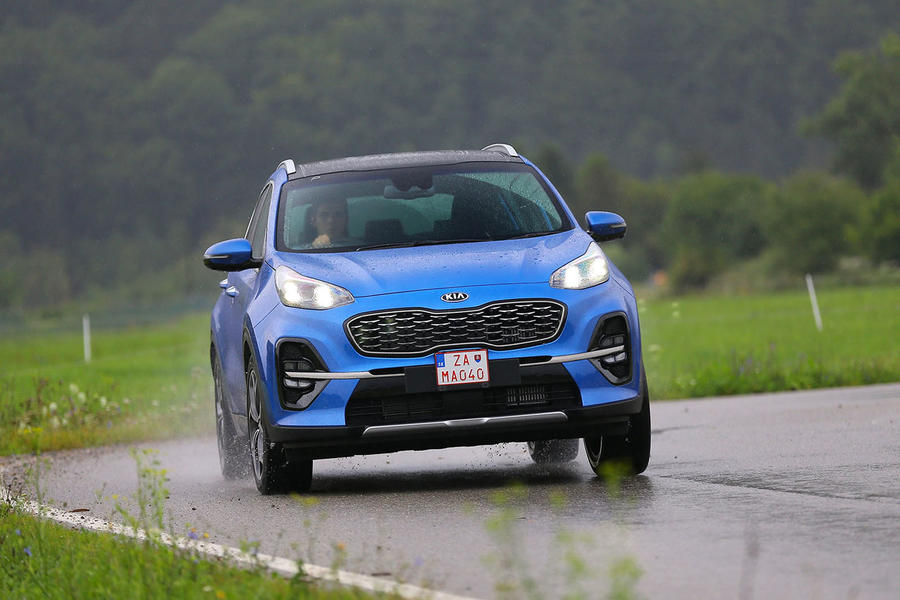 It seems to me that a lot of

It seems to me that a lot of technology is packed into these cars in order to scrape through the Euro 6d TEMP emissions but are of little use in the real world. I wonder how potential third or fourth owners will look at it.

This system in the Tucson

This system in the Tucson drop the emissions by nearly 20g/km with the same power available so it works for sure. But I think its too late in some respects, For the company car market BIK rates level out at the top so much now it actually makes little financial difference, in the Tucson the 2% lower BIK band saves a 40% tax payer a mere £200 a year.

Although it would have been a lot more if it were not for the new emission testing being harder.

March of the hybrids

My colleague averages 48mpg from the outgoing 1.7L. The 52mpg from the 2L more powerful mild hybrid quoted by Autocar sounds even better.
Soufriere 25 July 2018

We've had a 1.7L sportage for 2 years and it's never got better than 39 miles to the gallon. Even on long cruises it's an attrociosuly uneconomical engine. For context my old E90 330d managed 40+mpg despite being driven like a hire car all its life.