From £24,7857
Fifth-generation compact SUV does refinement, handling precision, technology, space and alternative style well (if you like the new look). Hybrid powertrain lacks a little versatility and has pretty average economy, though
Up next: Prices & specs
Open gallery
Close

The development of Kia has been fascinating to watch these past couple of decades.

Having existed in the wilderness beforehand, it first became an imitator of European car design, and then something of a precocious master of it. The company now has a range of very attractive showroom models; from Stonic to Soul to Ceed to Proceed to Stinger, you’ll notice them when you see one, and for the right reasons. Suddenly the company has a legacy; something to lose. So what now?

If the measure of a modern premium car brand is one that used to make good-looking cars but now thinks super-distinctive, ‘polarising’ design is more useful, perhaps Kia has finally arrived. Personally, though, I prefer where it is now to where it seems to be headed.
Matt Saunders | Road test editor

Well, it’s evidently not afraid to take a risk. If this new version of the Sportage compact SUV is any useful guide, its next design chapter might be entitled ‘bold and avant garde’ rather than ‘studiously practised and accomplished’. The fifth-generation Sportage isn’t a ‘pretty’ car - clearly, it isn’t intended to be - but, just as the breakthrough third-generation model was, it’s a statement all right. Its form is supposedly “inspired by nature”. It’s intended to look “sophisticated and organic”.

It’s certainly predatory. To these eyes, the car’s bursting, angular primary features look a little like they belong to something an oily Sigourney Weaver might once have levelled a flamethrower at. Glossy black contrasting body trim completes the sci-fi aesthetic, which you won’t forget in a hurry. Is it distinctive? You betcha. ‘Assertive’ even, as Kia itself prefers. Attractive? I’m not convinced.

The car certainly needs a long old while to soften on your senses. It’s very busy and a little contrived-looking to me; even at the end of our two-hour early test drive, looking at it still caused a visual jolt. But perhaps that’ll change. It’s hard to innovate when your canvas is a fairly boxy, bluff SUV body, after all. Much easier to do so successfully when you’ve got a low silhouette and a new EV skateboard platform to work with, as the neater and more effortlessly original EV6 proves.

This Sportage is an ambitious car technically as well as in design terms. Adopting the ‘N3’ platform of the bigger Sorento SUV, it gets a lighter, stiffer chassis than its predecessor, and a pair of fully electrified hybrid powertrains, with four-wheel drive for those who want it. It also retains both the conventional and the mild-hybrid petrol and diesel engines of the last-generation car, for those who’d prefer something simpler. 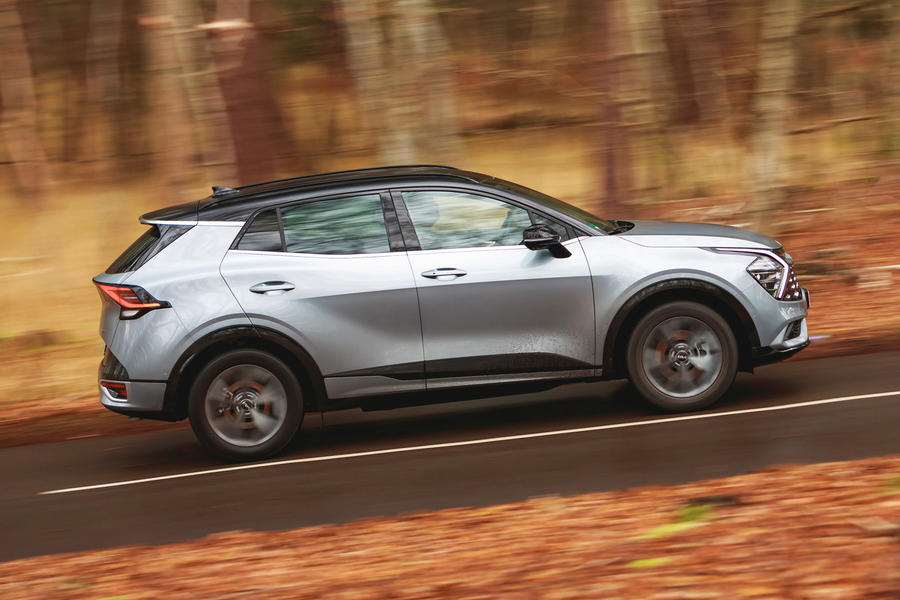 This time the Sportage has been engineered and tuned in a dedicated-European-market, short-wheelbase form for production at Kia’s Slovak factory at Zilina, and yet useful gains on five-seat occupant space versus its predecessor are still claimed. It gets a new and more upmarket interior typically packed with eye-catching digital technology, as well as Kia’s very latest active safety and driver assistance systems. And yet the value-motivated buyer hasn’t been forgotten about, with entry-level petrol and diesel versions of the car both coming to the market early next year for less than £28,000.

Kia brought left-hand-drive, German-market-specification examples of the all-new 1.6-litre hybrid version of the car to the UK to generate some first road test impressions. Except for running on winter tyres and adaptive dampers (neither of which will be available in the UK), they were a close match for the range-topping GT-Line S-trim Sportage models that will begin arriving in the UK early next year.

The Sportage certainly has an appealing driving environment. A flight console-aping duo of widescreen ultra-thin instrumentation and infotainment displays curves across in front of the driver (lower-grade cars will get conventional instruments and a smaller central display), and is bracketed by unusual fin-shaped air vents. You’ll notice the trapezoidal loop-shaped interior door release pulls too. This is an interior designed to catch the eye every bit as much as the exterior does, and it succeeds at that.

It’s also one replete with digital technology but not dominated by it. The ventilation controls are independent of the main touchscreen; a bit fiddly to use at first, but not lastingly so. The infotainment system could do with a physical input device. But the car’s fixtures and fittings feel solid, secure and robust throughout; although the car’s switchgear still feels unashamedly plasticky in places, and some of Kia’s decision-making on where to use soft-touch mouldings and where not to bother still baffles.

In terms of practical cabin space, the Sportage is class-competitive without being the most accommodating family car you might spend somewhere between £30,000 and £40,000 on. The back seats are adult-sized and comfortable even for six-foot occupants, and you could get three kids across them if you needed to. The boot matches or narrowly beats what you might find in a key rival like the Peugeot 3008 or Skoda Karoq. The hybrid version of the car has almost as much carrying capacity as any other, although the more powerful plug-in hybrid comprises more of it. 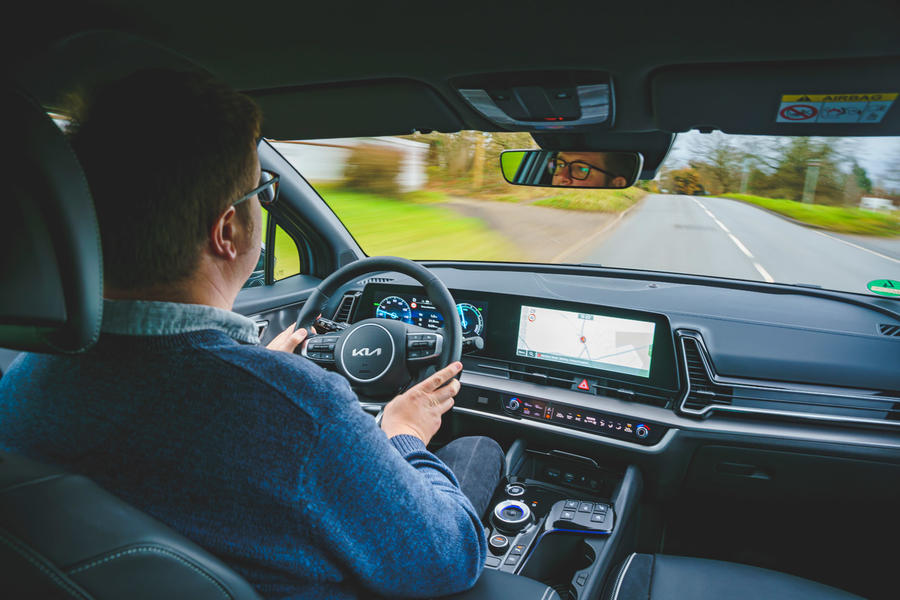 An unusual abundance of choice characterises the engine line-up of this mid-sized Kia SUV, then; I wonder if this hybrid version will be the victim of it? It’s a hybrid, of course; and right now, the whole world thinks it wants one of those. But on paper, it doesn’t offer much better fuel economy than the mild-hybrid Sportage models; it’s not a great deal cheaper than the PHEV version, with its much more significant potential economy and emissions gains; and, although it ought to have a bit of performance allure with 227bhp and plenty of torque to put to use, it falls a bit short on that score too. The hybrid system (familiar from equivalent versions of the Sorento and Hyundai Santa Fe) is particularly refined and smooth, and makes plenty of torque for easy roll-on responsiveness - but it’s much better when working at a relaxed cruise than when driven more keenly.

Leave the Sportage in Eco mode and it juggles electric and combustion-powered running very unobtrusively. It will pick up from low speed with an assured level of performance, and work its way to a mixed, in-and-out-of-town, real-world 40-something MPG.

But use Sport driving mode instead and you’ll find the car’s accelerator a little over-responsive to upper-pedal inputs; the engine noisier at high revs than you might like it to be; and the workings of the gearbox slow and slightly blunt on occasion. Fuel economy here can easily fall below 30mpg, and you don’t end up with a car that’s all that enjoyable to drive in return.

We should wait a while to pass judgement on the car’s ride and handling, for a test car in proper UK specification. But, on the right tyres and dampers and with a bit less weight to carry than the full hybrid, this should certainly be one of the better-handling cars in the compact SUV set.

It feels quite wide on the road but remains in control of its body movements at all times. It handles precisely and with at least a modicum of agility, and without rolling or heaving like a more traditional SUV. Filtered and slightly numb-feeling steering remains less of an invitation to enjoy the driving experience than the rest of the chassis deserves, but it’s intuitively paced. The Sportage’s ride is a little firmer and more reactive than most of its rivals, meanwhile, and may not suit you if you like a supple, absorptive character for a big family car, but it takes a fairly complex road surface to really upset it.

However muddled this car’s driving experience may seem at times, though, working as it does to cater to the tastes of an interested driver much more effectively in some ways than it does in others, you wouldn’t call it plain or ordinary; and, given the way this car looks, I suspect Kia will settle for that. Like it or not, this is a fresh face in a popular market segment and, however you judge it, it feels like a fresh take that’s worth a second look.