From £41,5858
Mildest version of off-roader is drivable and comfortable enough on UK roads but still all about what happens off them
Open gallery
Close

By quite widely held consensus, this is the most capable and uncompromising mass-produced, dual-purpose off-roader in the world.

In fact, the Jeep Wrangler, now four generations old by that name and stretching its roots back even further, to the seminal Willys MB of 1941, probably has a stronger claim to that status than any other SUV. And the latest version has just arrived on the UK's byways, back lanes and B-roads.

It should probably be number one on your shortlist if you want a car for the very roughest, toughest sort of off-roading – the sort that depends on a ladder frame chassis, a short wheelbase, short overhangs, rigid axle suspension, knobbly tyres, permanent, differential-lockable four-wheel drive, low-range transfer gearing and disconnecting anti-roll bars.

We’re talking about the sort of driving that tends to happen at a pace slower than walking, mind you, under the direction of guides and by the medium of a very particular system of nods, gestures and signals. The sort that puts cars like the Wrangler in places where you’d think quite carefully about trying to go on foot without at least a rucksack full of mountaineering equipment: at the top of slippery rockfaces, wading through two-and-a-half feet of water or climbing a 60deg slope.

The number of customers who need a car capable of that kind of thing must be low, but there’s a surprisingly large body of people who want one, and plenty of them have now been depending on Wranglers for decades. But Jeep's owners, Fiat Chrysler Automobiles, clearly no longer feels that it can rely exclusively on that committed band of devotees to deliver the future it wants for this model.

We say that because there's a sprinkling of extra practicality, habitability and comfort about certain versions of the new Wrangler, should you decide that the abilities of the ultra-tough Rubicon version won’t be best suited to your daily commute.

The Overland is the derivative to which Jeep is looking specifically to broaden the reach of its 4x4 icon. It comes on relatively road-friendly hybrid off-road tyre, has a hard-top roof and features heated leather seats and most of the creature comforts and safety features that you’d expect in a modern SUV. And, since the Wrangler has also been available with four doors since the introduction of the previous JK iteration, it’s comparable with a medium-sized SUV in terms of everyday practicaility, too. 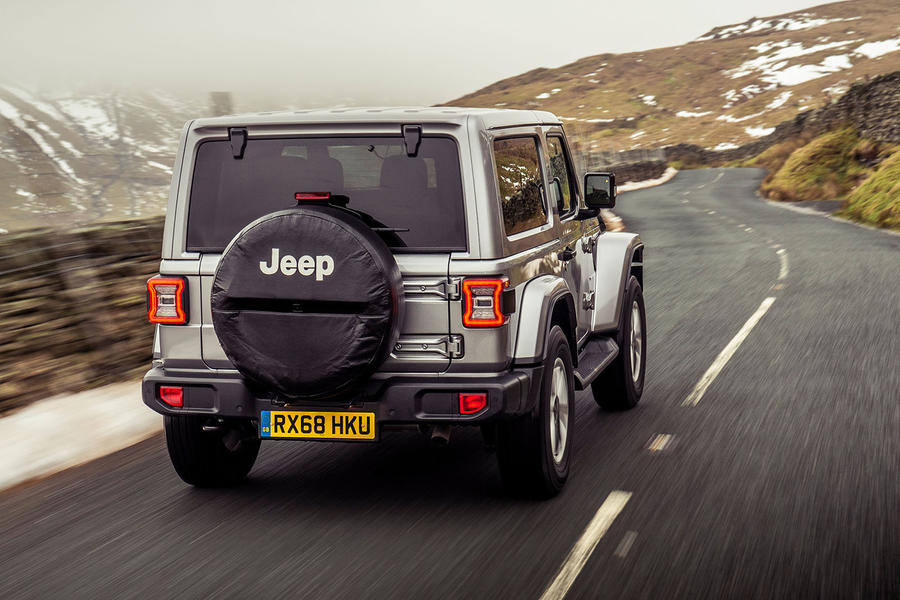 Jeep’s first important claim is to have made a bit more space inside, both in the second row of seats and the boot, to the improvement of the Wrangler's credentials as everyday family transport. And you can tell that those efforts have yielded some success, although they haven’t totally transformed something that continues to demand a compromise or two on convenience.

You slide into a raised driving position pretty typical of a fairly large modern SUV, but you have to lift your legs over a fairly obstructive sill, through narrower-than-average door apertures and into a footwell that's unexpectedly cramped and has no rest for your left foot. There’s good head room up front but less space for legs, knees and elbows than taller drivers might wish for – although not sufficiently little of the latter that you’d be inclined to roll down the driver’s side window, Land Rover Defender-style, just to buy yourself enough leverage at the steering wheel.

In the second row, head room is matchingly abundant and leg room good enough for all but the very tallest adults. Boot space, at 548 litres up to the windowline, bears comparison with that of almost any mid-sized SUV. The loadbay is square, straight-sided and, but for having a side-hinged tailgate rather than a hatchback, as accessible and useful as you’re likely to want.

The Wrangler’s interior ambience remains relatively functional, simple and plain. While some of the fixings and mouldings aren’t quite what you’d expect on a £40k family car, they’re nothing you couldn’t overlook if you were so minded. The Wrangler comes with a modern touchscreen infotainment system, electric windows all round, cruise control and climate control and is awash with USB ports and premium-branded speakers. So, in many respects, it’s appointed and equipped like any big luxury car.

Our first European drive of the JL Wrangler came courtesy of a Rubicon-spec frontiersman special that showed off some notable, if understandable, dynamic compromises to on-road ride composure, grip and handling. The less rugged Sahara and Overland grades of Wrangler, however, have different axles, suspension struts and axle drive ratios, as well as different wheel and tyre specifications.

And while the Overland certainly felt every inch of its now-quite considerable width on narrow Cumbrian B-roads, it rode comfortably enough and handled competently.

A steering wheel of an unusually large diameter by modern SUV class standards, combined with fairly indirect steering gearing, makes the Wrangler seem a touch slow-witted and unwilling to change direction at first. You do get used to the gentle responses, but keeping it within the bounds of a typical country lane and off the cat's eyes continues to require plenty of concentration even once you have.

But overall, only a few predictable quirks and shortcomings make the Wrangler any more demanding or less comfortable to drive on the road than a more typical SUV of its size. The ride, although reasonably quiet and smooth, certainly suffers from a slight shortage of sophistication and can get a bit excitable over tougher surfaces. And at low speeds, the steering is heavy and not quite as positive when returning to centre as the modern SUV norm, so you sometimes find yourself having to manhandle the car out of corners after having hauled it into them.

Interior isolation and mechanical refinement aren’t typical of most modern SUVs, either, partly due to the proximity of a fairly closely slung, longways-mounted four-cylinder engine to the driver’s seat and partly due to the general lack of attentive sealing around the cockpit. There are manual soft-top, powered soft-top and targa-style removable hard-top versions of the Wrangler, and all of those roofs can be removed entirely so that, with the windscreen folded out, a safari-style, totally open driving experience can be ‘enjoyed’, and the downside is that none quite keep the wind out like a totally fixed roof might.

The Wrangler’s diesel-automatic powertrain makes a reasonably solid, strong and smooth impression, though, having more than enough torque to make it easy to mistake the car for something a few hundred kilograms lighter, as well as good responsiveness and drivability. The eight-speed ‘box tends to shift up slightly too keenly during give-and-take cruising, and a Wrangler would never have something as pretentious as a ‘sport’ driving mode that might otherwise prevent it from doing so. Using manual mode solves the problem nicely, however, keeping the engine spinning right where it works best. 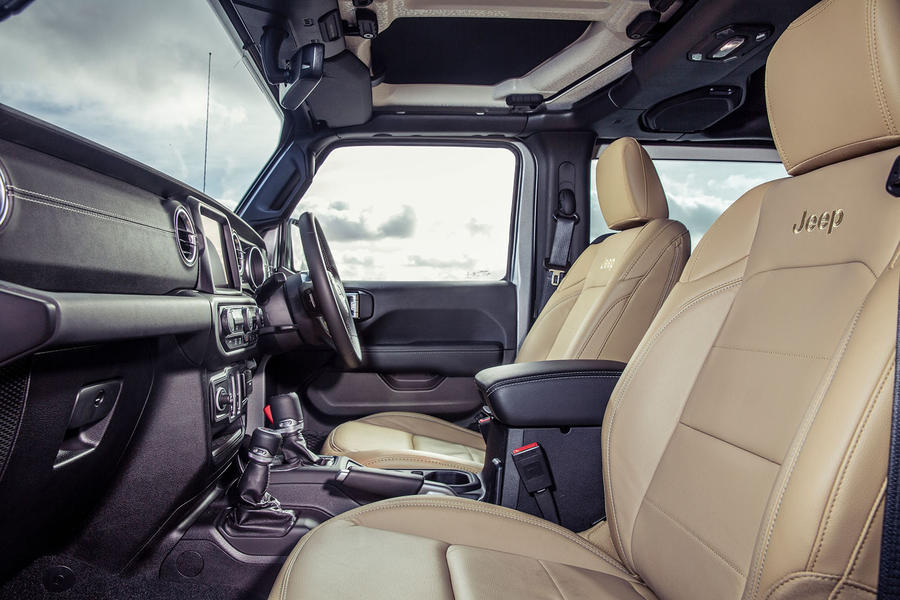 If you like the idea and the character of the Wrangler, could you tolerate it, live with it happily and use it on a daily basis without what makes it work as a genuine off-roader becoming tiresome on the Tarmac? That’s seems the more telling question, and while it’s a pretty big and important 'if’, we reckon you could.

Even in this specification, the Wrangler is never likely to figure in a buying equation that involves the Audi Q5 or Volvo XC60 – and neither should it. But it could probably get in the mix between, say, a high-end Land Rover Discovery Sport and a Volkswagen Touareg. It doesn’t have the polish or breadth of ability on the road of either of those cars, but it’s close enough to both that, assuming you could use its remarkable off-road ability at least occasionally, you could consider the trade-off worthwhile.

Which means the Wrangler has raised itself from that distant corner of the SUV market where the Defender and cheaper versions of the Toyota Land Cruiser were once its only kindred spirits and joined the bigger SUV scene. It has grown – at least, it has a bit. Just enough, we'd say, assuming you happen to like it. 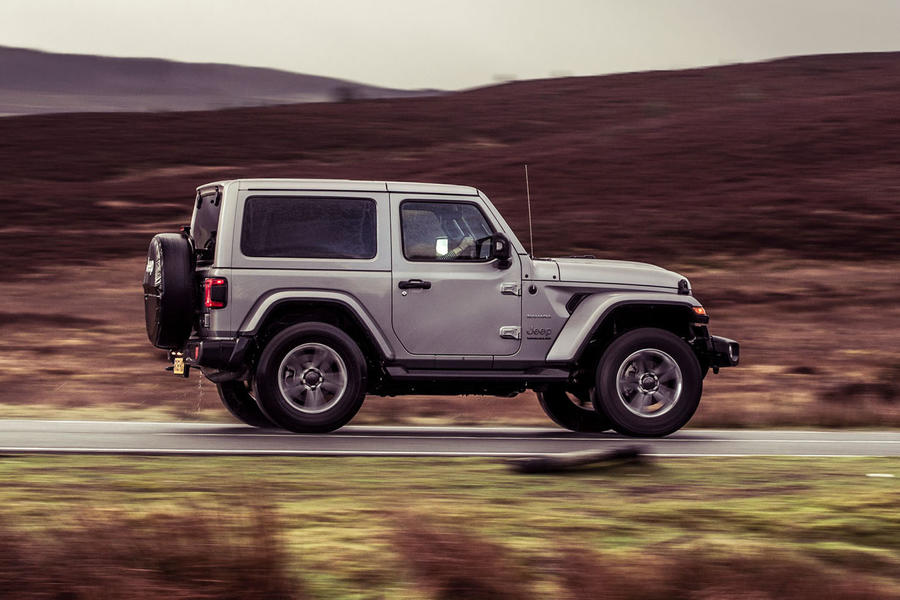 The only recent vehicle designed to do the same job is the new Suzuki Jimmy. Oh wait, I could buy almost three of them for the price of this. And probably end up being more reliable .  There is only two reasons to buy, looks and image. That's fine, if it floats your boat. But, let's not pretend there is any other rational reason for doing so.

The only recent vehicle designed to do the same job is the new Suzuki Jimmy. ...... let's not pretend there is any other rational reason for doing so.

The Jimny is certainly cut from the same cloth, but you'd perhaps need to see them both side by side to see the differences.

The Jimny is considerably smaller, and inside, the Wrangler is quite a bit nicer. And in terms of usable capability, the Wrangler will outperform the Jimny in many key metrics in this market. Towing Capacity to name one, the Jimny can only tow 1300KG, the Wrangler nearly doubles this. Wrangler can be had as a 5 door, not just a 3 door and has a much higher luggage capacity. Don't get me wrong, they are for the same crowd. If you can't afford a Wrangler, a Jimny might be your next best bet at the moment. If you don't need to tow, or need much interior space, again the Jimny is a great shout.

But your original comments are a bit narrow minded.

I’d been so looking forward to this JL coming to the UK market..............until I learned the price! Easily £10k overpriced. I had a new TJ Wrangler back in 1997, when it listed at just over half the price of a BMW 528i. How times have changed. Sorry Jeep, but I can’t see you growing sales this side of the pond.

I’d been so looking forward to this JL coming to the UK market..............until I learned the price! Easily £10k overpriced. I had a new TJ Wrangler back in 1997, when it listed at just over half the price of a BMW 528i. How times have changed. Sorry Jeep, but I can’t see you growing sales this side of the pond.

Your right alot has changed...

Shame our currency is worthless these days

Yet does the USD/GBP exchange

Yet does the USD/GBP exchange rate account for a current situation where a new BMW 530i SE starts at approx £43k in this country, thus roughly on a par with a Wrangler? Obviously the BMW is better value now compared to 20 odd years ago, but Jeep pricing has become ridiculous. Import tariffs for US products have long inflated prices in the UK, but I still feel Jeep are now too ambitious with their pricing strategy.

When Autocar calls the

When Autocar calls the Wrangler an "SUV" - you lose all sense of credibility.

If you want to go mall shopping - this vehicle is not for you. But as a true off-roader, there is no real competitor to the Wrangler - until the Defender comes along. So stop whining and take your spot of tea somewhere else....