BACK TO ALL NEWS
Currently reading: Tackling the Rubicon Trail in a Jeep Wrangler Rubicon
UP NEXT
New Morgan Plus Four CX-T is rally-ready sports car

The Rubicon Trail high up in the Californian mountains is the ultimate off-road test of mettle and metal. We take up the challenge in what else but a Jeep Wrangler Rubicon
Share
Open gallery
Close
Share story

You’ll know Laguna Seca: the glorious California racetrack whose legend is built on turn eight – aka the Corkscrew.

A freakish left-hander taken blind, it plunges car and driver almost six storeys with a viciously steep sweep to the right. Distorting and with endless scope for error, it’s nevertheless done, dusted and behind you after a few intense seconds. At least until the next lap.

Now imagine driving a Tarmac-ripper up and down the Corkscrew every day for a week, then sprinkling the track with knee-high granite rocks. Some of these rocks are sharp with dark, flinty edges but othersare glass-smooth and slippery. Many are damp, and all are spread out inconsistently atop a shifting soup of smaller stones and mud. Replace the azure sky with a gloomy canopy of aromatic Douglas fir. Narrow the breadth of the track from five car-widths to barely one and sporadically escalate the downhill gradient to a stomach-churning degree. Forget about phone reception – you’ve had precisely nothing for hours.

There’s no quick and easy way out of here, so try to relax into the emulsion of sun cream and dust daubed across your face, neck and arms. Take a deep breath, then ease off a brake pedal suspending two tonnes of metal, plastic and BF Goodrich rubber. Welcome to the Rubicon Trail. The pedal in question is attached to the latest, JL-generation Jeep Wrangler – gently tweaked, substantially improved but, to everybody’s relief, fundamentally unaltered from before – and what you’ve just imagined is a stretch known as Cadillac Hill. In essence, this is 15 sweaty-palmed minutes of warily managing gravity in such a way that machine isn’t unnecessarily damaged or beached entirely by your own ineptitude.

It’s one reason why the trail as a whole is regarded as the toughest off-road challenge in the world – a hot lap of the Nürburgring for those of a knobbly tyred disposition – and were it any easier, it’d be a disappointment. The prospect of axle-breakage looms large here. More so if you’re driving a Land Rover, say some partisan but pleasant locals we encounter.

Because of the remoteness of this point, an hour’s drive south of Reno in the El Dorado mountain range, even minor maladies can mean an overnight stay before a ‘trail repair’ can be made. Like many a wilderness, it is spectacularly pretty at times, but it’s equally brutal all of the time. Jeep’s association with the place goes back to 1953. It was then the first organised tour left Georgetown, a tiny settlement established a century earlier as a camp for hopeful gold rushers.

During two days of what must at times have felt like an intolerably hard slog, more than 50 ‘CJ’ Jeeps – popular among Second World War veterans – initiated an annual tradition that exists to this day in the form of the Jeepers Jamboree. Modern-day tours can number 400 cars, each subtly remoulding the trail with every turn of their wheels.

Today it’s our turn, and our machinery is interesting for two reasons. First is that we’re dealing with the Wrangler Rubicon, which is the latest, most hardcore model you can buy in factory spec. The standard car is enormously capable but here you get Dana 44 solid axles (not just stronger than before, but also wider, so the turning circle is family-hatch tight), massively flared arches for 33in all-terrain tyres and an ultra-low-range gearbox. Jeep says this is the only car in the world that’s capable of tackling the trail in standard form. Suzuki may beg to differ. Mercedes, too, although one of our colleagues – a 4x4 specialist from a respected German title – concedes you’d discover a G-Wagen’s unprotected sills in a terribly sorry state come the end of the day. 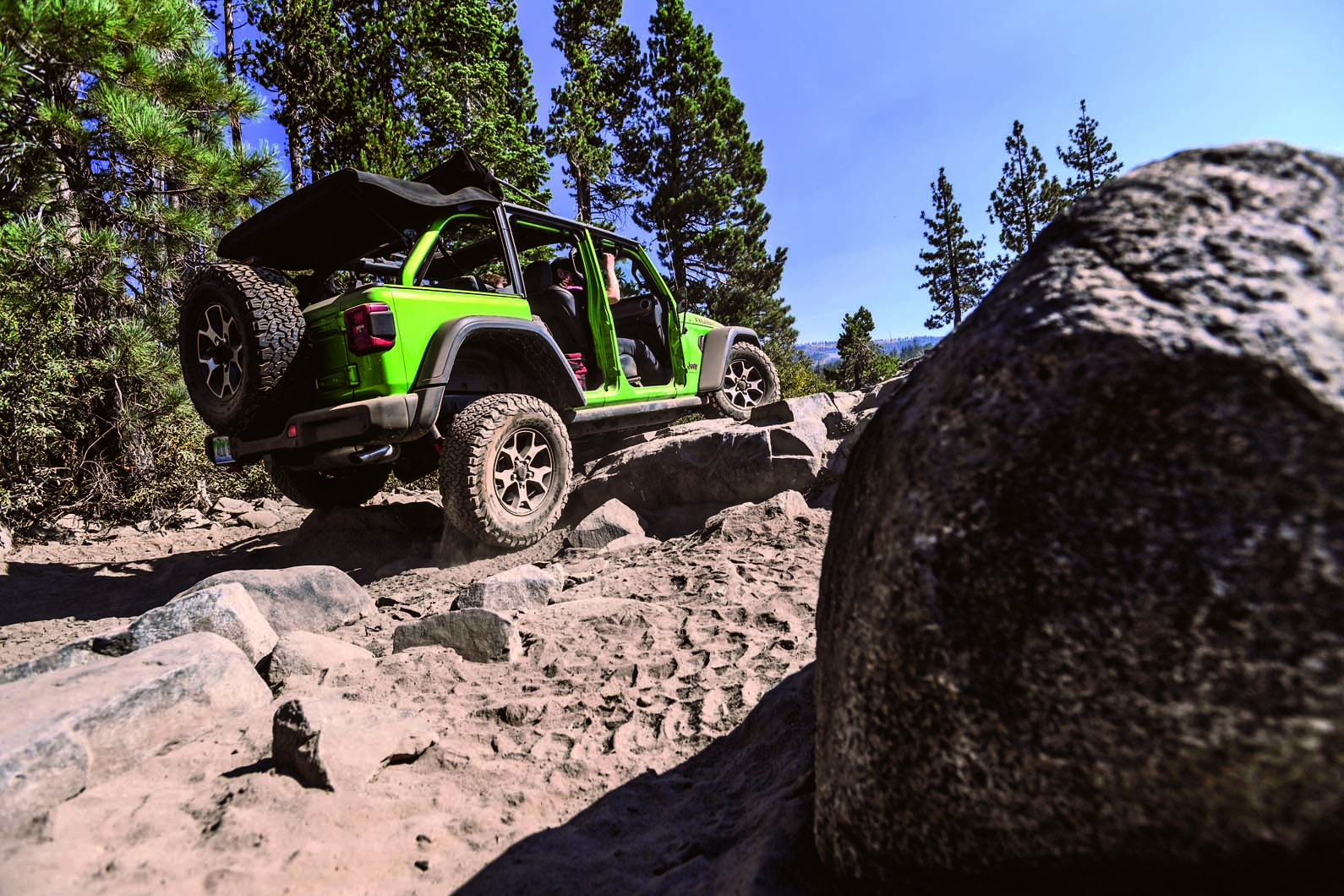 But that is a group test for another time. Right now, the JL generation feels a lot slicker than its predecessor. Dropping the windscreen flat historically allowed the Willys and Ford-built Jeeps to be shipped more easily to conflict zones and it’s always been a hallmark of the model. It was always fiddly, too, and although ours is erected to help stave off endless plumes of dust, folding the thing is now a matter of removing a mere four bolts instead of 28. Likewise, peeling back the canvas roof (a hard-top is available) isn’t quite MX-5 easy, but it’s close. We have it drawn over for shade. The car’s spacious interior still uses bulky switchgear but the materials are now much nicer, and there’s some proper ‘connectivity’, too, along with an 8.4in touchscreen.

The second reason is more subjective, and it’s why we’re out in the Californian wilds in the first place. In Europe, the Wrangler is mostly a style statement. Driving one on the same soil Jeep uses for development purposes reminds us that were we to take the progeny of a mountain goat and a spider, then somehow mechanise and add comfy seats, this is what you’d be left with. Like plucking a mid-engined Ferrari out of London’s congestion zone and depositing it at Fiorano, not only does such a single-minded car make much more sense out here, it’s duly blowing our minds with its proficiency.

What we don’t have are doors, and out here that’s just lovely. Useful too. There are sections where the rock banks are so threateningly narrow that sidewall brushes stone and you could easily peel an arch open.

Tilting your head out helps you better guide the car’s ladder chassis and appreciate the vast wheel articulation on offer – vaster still if you’ve pressed the button that disconnects the front anti-roll bar. The trick is to meet larger rocks with wheel rather than undercarriage – 44 gratefully received degrees of approach angle permits this – and, if necessary, let the so-called rock rails take the blow. They screech and scrape awfully, but failure to proceed in this manner leaves one Jeep jacked up on an air cushion so the guides can crawl underneath and remove a rock crimping the transmission-coolant line. 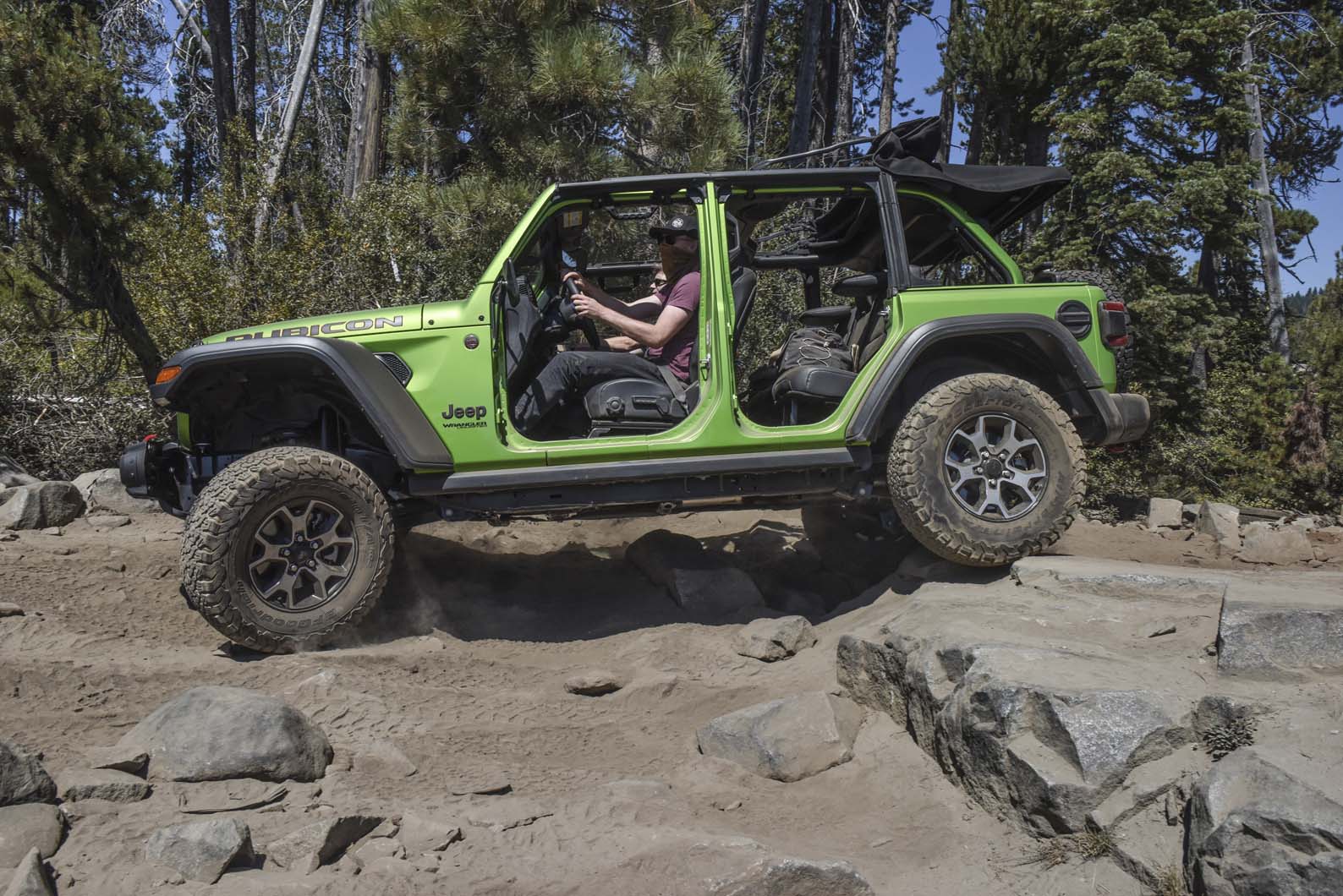 Similar to track driving, you’ve got to let the car do the work, which in this case comes courtesy of a 2.0-litre turbocharged petrol with 268bhp and 295lb ft. It’s all sent through an eight-speed automatic and automatic – but switchable – locking diffs, which we engage for the steeper, dustier stretches when wheelspin crops up. Do that and you may as well be riding a travelator, so effortlessly does the Jeep haul itself onward and upward.

By force of road-testing habit, I reset the trip computer in the morning. Arriving at Rubicon Springs – an eerily still and quiet idyll, notwithstanding the occasional black bear – the figures tell their own story. We’ve covered 7.4 miles at less than walking pace with an average economy of 5.6mpg. It’s been exhausting, the physical demands outweighed by the mental drain of plotting the perfect course inch by inch. But it has been colossal fun.

In fact, even for somebody more excited by Cup 2s than crawl ratios, it’s not difficult to see why you might invest heavily in the hardware to go nowhere in particular at a glacial pace. Especially so when the hardware is as iconic as a Wrangler, and the nowhere happens to be this extraordinary corner of the High Sierra.

History of the Rubicon trail:

The first time anyone successfully undertook the journey to the resort at Rubicon Springs with four wheels and an engine was in 1908. Marion Walcott drove a Mitchell Model I Touring from San Francisco, frequently using planks and block to negotiate rocks. The resulting story – never again, she said – appeared that winter in the Pacific Coast Motor (The Autocar did not, alas, commission Walcott).

The road had, however, been established before then as a route for stagecoaches travelling between Georgetown to the west and Lake Tahoe, and was a Native American trial even before that. The resort closed in 1926, with the road falling into disrepair, only to be resurrected as an off-road Mecca from the middle of the century on. 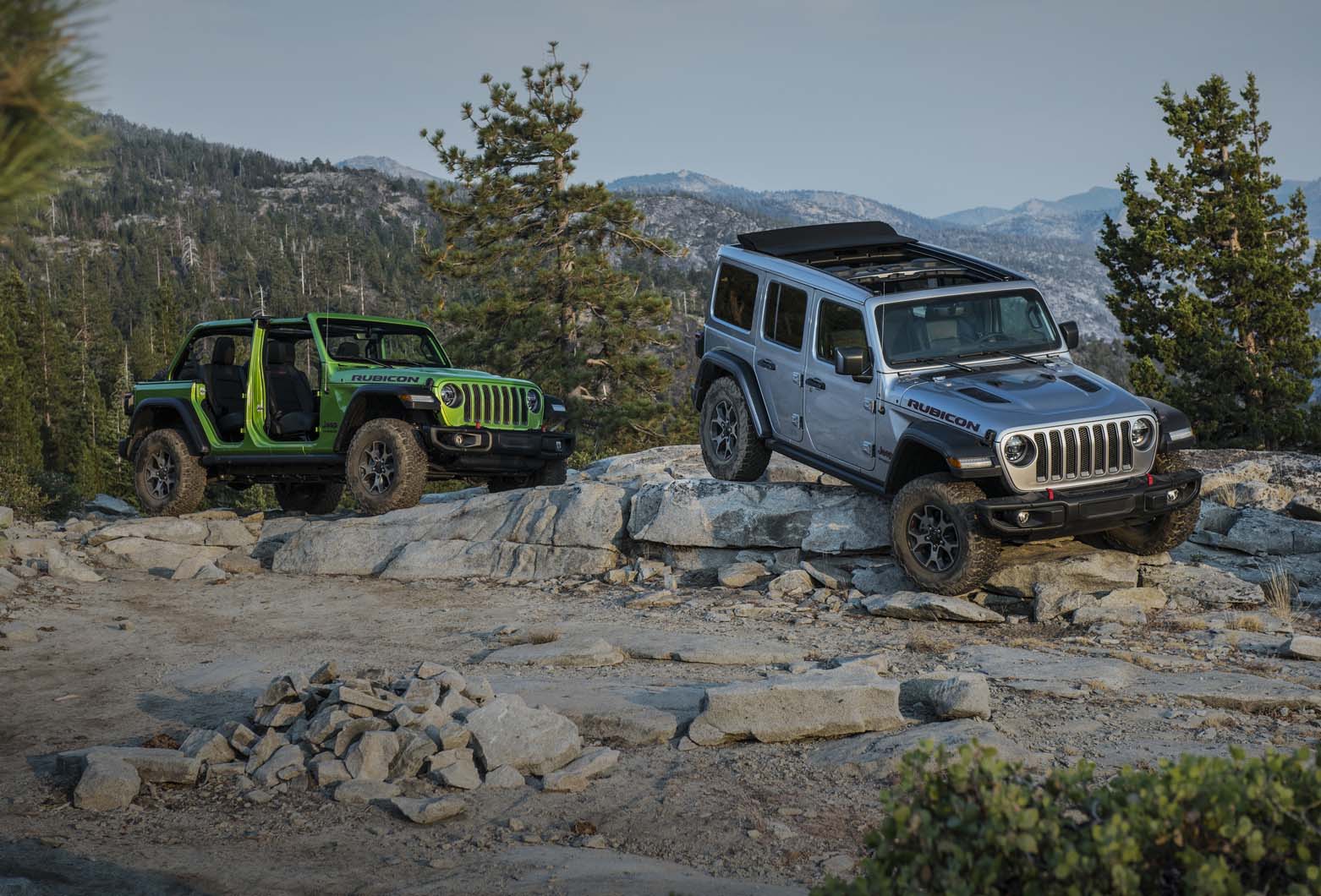 How we conquered the Rubicon trail:

RUBICON SPRINGS: The final few hundred metres before camp are bewildering as you’re forced to plot a course over a severely sloping rock bed dotted with narrow sluices. It feels like putting an Aventador up an ancient NCP at times, but there’s a beer waiting at the other side, so we plough on.

CADILLAC HILL: The toughest obstacle we’ll tackle on this trip. Hopelessly steep, with wet rocks, unexpected gullies and jutting tree roots – we’ve got both differentials locked. The order of the day is a blend of patience and knowing when to maintain momentum with the engine’s torque. The Wrangler feels close to rolling over at times, but maybe that’s just our nerves.

OBSERVATION POINT: It’s all about breakover and approach angles here because the final stint to the spectacular views of Observation Point is like something from Super Mario. Our Jeep’s short overhangs help endlessly.

LAKE TAHOE ENTRANCE: Wrangler barrels along these smoother, lake-flanked roads with a dust trail that must be visible from space. The lazy, indirect steering is at its most conspicuous here, but progress never feels unruly and the suspension easily mops up corrugations.

Fiat-Chrysler group: the next five years

A high price helps keep it exclusive and give the impression it's a high quality item.  They know they won't sell many in the UK but a high mark-up means a profit is still possible.

Lovely vehicle, but the price here in the UK will severely limit sales. Jeep’s current price list show the 2 door Wrangler Rubicon is £46,495 and the 4 door £47,995. To that you can add £775 for metallic paint. And this is for a 2 litre diesel.

I first bought a new Wrangler TJ Sahara 4 litre 2 door in 1997, when the list price was approx £18k with metallic paint. Less than a year earlier, a BMW 528i that I bought new was £34,400 with a couple of extras. So that Wrangler was a relative ‘bargain’ at little more than half the price of a luxury saloon. Jeep now think they can hugely raise the relative price of the Wrangler, and actually increase European sales. Time will tell.

It's great, but the fold flat

It's great, but the fold flat windscreen is unneccessary.  It was essential when shipping original Jeeps, but the B and C pillars added since that original make it pointless.  If only they could make it cheaper.  I'm afraid their reported costs of £40k plus means sales in the UK will only be counted in the hundreds per year - same as the JK.