From £30,9959
Share review
Can a more civilised Type R really work - or just dilute what originally made it special?
Share
Open gallery
Close

Do you have a problem with the way the Civic Type R looks?

Honda thinks you might, which is why it has added this Sport Line version. It exists chiefly to tone down the warzone aesthetic of what is surely the finest senior hot hatch of the current crop.

The big casualty is the high-level rear wing – that see-it-a-mile-away identifier of Type R-ness. It has been replaced by something subtler, even if, should you inspect the undersides at its extremities, the new part still features vortex-generating fins.

The wheels are downsized, too, from 20in on the Type R GT to 19in, although space remains for the full-fat car’s 350mm MMC brake discs. Those wheels wear what’s now the third different tyre Honda has fitted to its Ford Focus ST rival, after using Continental Sport Contact 6 rubber on the original and semi-slick Michelin Pilot Sport Cup 2s for the hardcore Limited Edition launched last year. It’s Michelin’s Pilot Sport 4 S rubber that has been called up for duty this time – in our experience, just about the best road-focused tyre around, with soft sidewalls yet also plenty of precision and support.

Finally, the red exterior pinstriping of the regular Type R has disappeared, as has the red cloth of the otherwise unchanged bucket seats, and some of the ordinary Civic’s soundproofing, removed from the regular Type R to save weight, has been put back in.

That said, the Sport Line’s kerb weight is the same as before, at 1380kg – a class-leading figure. 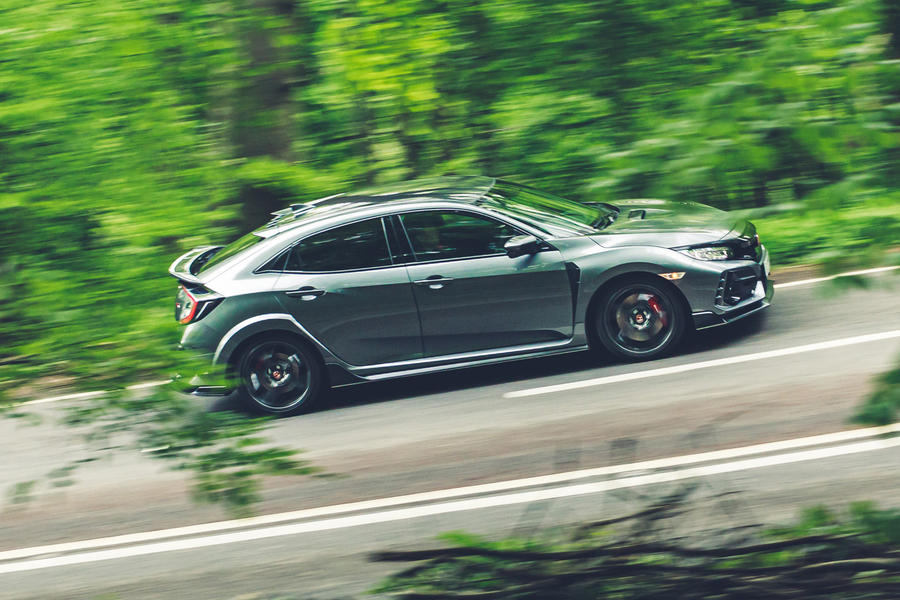 And the results? Well, visually, you can judge for yourself. Even the regular Civic is quite a punchy, aggressive-looking thing, and the Type R raises the temperature considerably, so even with its docked tail, the bulldog-ish Sport Line was never going to blend in like the Volkswagen Golf GTI does. You still have the triple-tipped exhaust, bulging wheel arches, unmissable bonnet scoop and chicken-wire galore across the front of the car.

However, what really makes the Sport Line worth considering is the combination of 19in wheels and the NVH improvements, because having spent plenty of time in the regular Civic Type R in the past few years, I can’t remember one ever being this pliant or quiet or generally well mannered in day-to-day use.

Throw in the rev-matching function for the short-throw gearshift and you have something genuinely easy to bumble around in but that still, when you want it, exhibits the same seat-of-your-pants sense of occasion and integrity in the driving controls as the proper Type R.

Maybe turn-in isn’t quite so crisp on the smaller wheels, but otherwise, the Sport Line takes apart B-roads every bit as well as the regular GT.

It’s balanced, it’s supple and, above all, it’s sensationally quick. The Sport Line also gets the Alcantara-trimmed steering wheel from the GT and the alloy gearknob. What a joy that is to operate. In an era when plenty of hot hatches are offering only two pedals, the Honda doesn’t just have three to play with but the set-up is so good you often change gear for the hell of it.

It’s also worth remembering that the Civic, in any guise, is among the more commodious hatchbacks, and the driving ergonomics are spot on. As makers of GT sports cars have long known, a low-slung and supportive driving position is often also an inherently comfortable one.

Whether or not you then pair that with an unforgiving suspension setup is another matter, but that’s not the case with the Type R Sport Line, which rides tautly but, in the context of its performance potential, also pretty serenely on most roads. 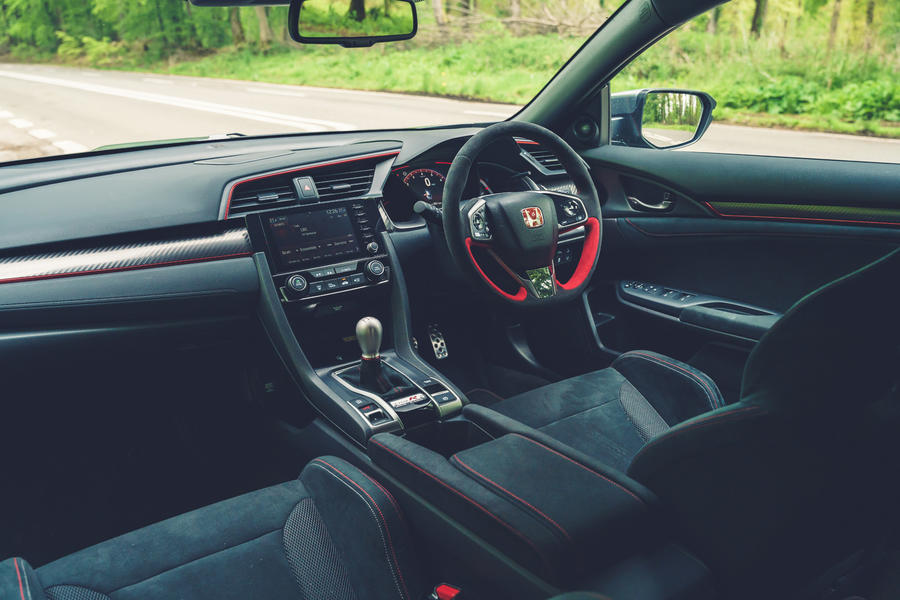 All in all, for shrinking violets or for those who need their 316bhp hot hatch to be more than a weekend toy, the Sport Line would do very nicely.

It raises the Type R’s day-to-day credentials - but remains about as subtle as a punch in the face. 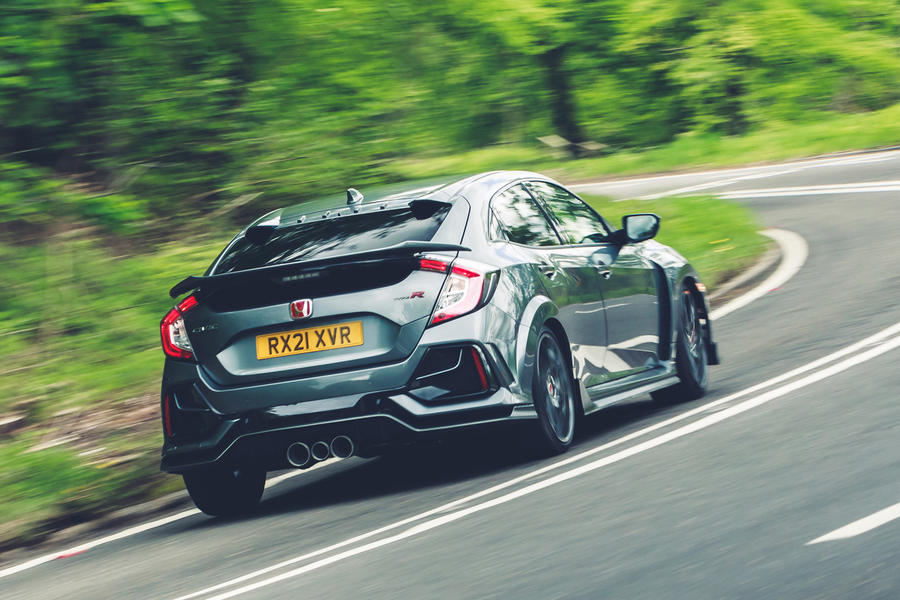 For my sins I actually went and bought a Sportline Type R after my previous VW group retirement product proved a bit of a let down..(not a Skoda which have always been excellent).

At the age of 60years I've always thought the Civic Type R with the big wing and wheels and Red seats has probably looked 30 years too young for me. I've always admired the Type R and knew there was a good very well engineered car underneath all the razzle dazzle......so when the Sportline came on the scene with it's "toned down" looks I thought...."Thats the fella"......time to say good bye to the VW...........colour choice was limited....but Red seemed a good choice with the Black highlights.

As well as the Civic I test drove the Focus ST and Yaris GR....both were good cars...the Focus didn't quite feel as special as the Civic and looked to my eyes a bit bland.....and the Yaris whilst  being a hoot to drive was hopelessly impractical and I got the feeling that 5 months down the line, maybe you'd get tired of it's "cartoonish" ways.......decent car but personally just not for me.The long delivery time from December would also have meant that I would still be waiting now for it to arrive.

The test drive in the Civic was a revelation, the feeling being straight away that it really was a "proper tool" and yet it could be bumbled around as regular daily driver with plenty of space in it for when you just wanted to be....."normal"....a real pussycat......great build quality.It passed the much spoken of 50 metre driving test with flying colours.

The dealer threw in the 5year no charge service agreement without any hassle and also agreed to pay me for a Spare wheel.Not sure if it's true but I heard somewhere that the Type R engine only requires Fluids and Filters for the first 100,000miles...extraordinary. (maybe explaining why the Service agreement was an "easy ask".)

Within 2 weeks of the car being stood on the drive,EVERY one of the neighbours young and old had commented positively on the looks of the car........in 20 years of living at the same address this is the first time ANY of my cars has provoked any comment, it was a little embarassing for the right reasons.

If you want exclusivity, I haven't seen another Sportline on the road yet,performance wise its thousands of pound cheaper than most of the "German Iron" and most of the others,its a joy to get in and drive and certainly makes the eyeballs pop when you want to "go somewhere".

Yes agreed the fuel tank capacity could be bigger....but 300 miles is easy and bumbling along the motorway at 65mph (if you want to) will get you 40mpg.....34-36mpg being the norm.

I know even in this "toned down" version it still might not be to everyones taste but it certainly is a very very good car underneath and being the first ever brand new car I've ever bought with my own money........I'm really pleased with it.

Hope this entry is of use to someone.

Hi LP – we use a weighbridge for the full road tests. With so many new cars to review every week, it's not practical to put every 'first drive' car onto the scales ourselves. MY2017 Civic Type R GT came in at exactly 1400kg with full tank (road test #5343, 25/10/17). Any manufacturer claim we use for first drives will be DIN. Thanks, Richard