From £30,9958
Honda's Civic Type R is back, with a new front-drive Nürburgring record and a point to prove on the road too
Open gallery
Close

This is the new Honda Civic Type R, as you can probably tell from the tremendously large rear wing and the fact that it looks like a selection of power bulges haphazardly applied to a vaguely Honda-shaped hatchback.

What that becomes, though, is the most powerful front-drive hatchback around, with 316bhp. By conventional thinking, that's the sort of power you’d put through all four wheels. Not so Honda, which has recently made setting the front-drive production car lap record at the Nürburgring its ‘thing’; it did it with the previous-generation Type R and has done so again, so it says, with this, going around the Nordschleife in 7min 43.8sec, seven seconds quicker than the previous Civic Type R. The new car's lap time is very brisk, all things considered. And although doing that doesn’t necessarily equate to creating a terrific hot hatchback for the road, it fairly guarantees it will have impressive performance credentials.

I won’t dwell on the car's looks, but the short of it is that I’ve put pictures of the Type R on social media and the general reaction, rather than the usual “Is it any good?”, is “Holy moly, even that car’s mother would turn away from it”. There’s reason behind the appearance, though. The rear wing and underbody give it positive downforce, which is unique in the class, according to Honda.

The body itself has a longer wheelbase than the previous-generation Civic, while relocating the fuel tank from beneath the front seats to beneath the rears means that the driver sits 50mm lower than before. The centre of gravity is lower overall, too. Some bonding rather than spot welding means the body-in-white is 16kg lighter and 38% stiffer than the previous Civic’s, but the most significant mechanical change is that there’s no longer a torsion beam rear axle. Instead, the latest Civic gets a fully independent, multi-link set-up. 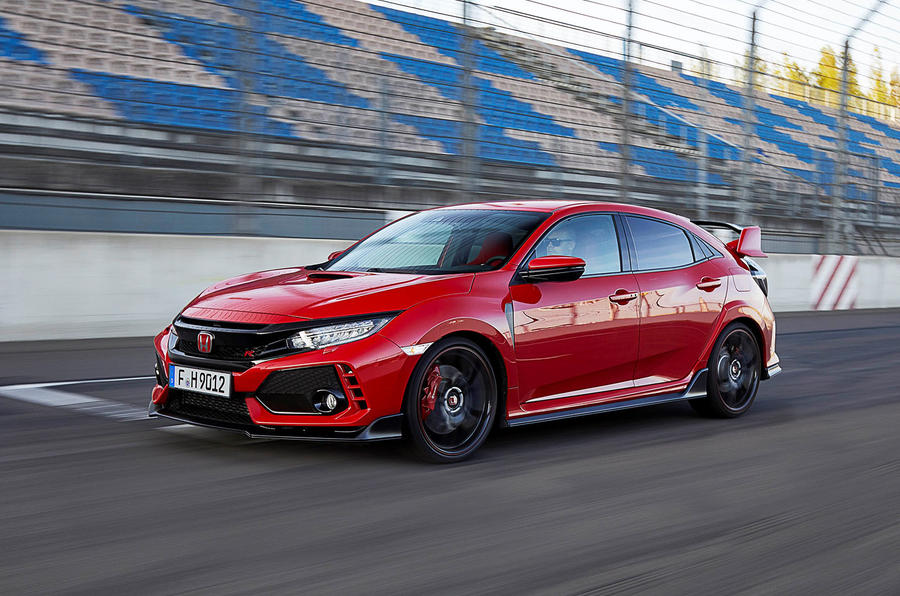 At the front there are MacPherson struts but, as is sometimes the way with really powerful front-drive hatches, they’re dual-axis ones. Some manufacturers give this set-up different names – Ford called it the RevoKnuckle, Vauxhall/Opel the HiPer Strut.

On a conventional strut, the whole strut turns when steered, which means there’s a large distance between the centre of the driven wheel and turning axis, across which distance the wheel torque acts, and can corrupt the steering. The dual-axis strut puts the wheel carrier on a separate knuckle, and only that part turns, making the turning axis much closer to the wheel centre. The result is a bit like pushing a door near the hinge rather than the handle: the force acts over a shorter distance, therefore the same effort moves the door less. And in this case, hey presto: less torque steer.

This can mean, too, that there’s less road feel through the steering, but when it comes to 316bhp and 295lb ft acting through the front wheels alone, that’s a compromise worth making. The Civic's engine drives through a six-speed manual gearbox - there’s no flappy paddle option – via a limited-slip mechanical differential. As well as all this, the Honda will brake an inside front wheel, so it feels less like you’re munching the front tyres for the sake of it.

And the engine? It’s still a 2.0-litre four-cylinder turbo. It retains the same block as the old model, in fact, with a lone, single-scroll turbocharger and VTEC variable valve timing on the exhaust valves. There’s more cooling all around the engine and on some detail bits inside: the oil cooler is now water-cooled rather than air-cooled, there are oil channels in the pistons and the valves are silicon-filled, all for better heat dissipation.

But it’s the work on the exhaust that has liberated the most power. The exhaust manifold has a water jacket around it, and the rest of the system is freer-flowing and easier-breathing than before. Giving the engine this easier exhaust while maintaining lower temperatures at the top of the engine means the power can be turned up without the engine being inclined to pre-ignite, or knock. The reason for the small, third, central exhaust tube, meanwhile, is to reduce boom at lower revs and on smaller throttle openings. Negative pressure going back into the pipe apparently reduces resonance at low revs but then helps the air flow out at higher revs.

What else? There are drive modes, of course: three of them, rather than the previous two. The car starts in Sport mode by default, but on each side of it are Comfort and +R, in which the aggression of the adaptive dampers, steering weight and throttle response are ramped down (Comfort) or up (+R). The steering itself has a variable ratio; it’s slower just around straight ahead, quickening as you wind lock on, a common and neat trick to combine high-speed stability with a feeling of agility at lower speeds. Which, given that this is a 169mph car that also purports to be a sporty hot hatchback, is why the Type R has it.

Our drive is in eastern Germany, on roads and a racetrack. The track is great, but during our test we don’t find too many roads that are anything other than kitchen-lino smooth and with easy, constant-radius curves, where any exist at all. Thus, if you’re looking for me to tell you whether the Civic will buck and weave around your local B-road like a picnicker trying to keep a wasp away from his jam sandwich, I’m afraid I can’t tell you with pinpoint accuracy.

The signs, however, are encouraging. Even Sport mode seems largely comfortable. Firm and controlled, yes, but pliant with it. The fact that the Civic’s seats are both comfortable yet uncommonly supportive presumably helps, as does a driving position that is low-slung, with a hugely adjustable steering wheel and easily modulated pedals and which should give Ford and Renault a benchmark next time they make a hot hatchback. Do you like your motoring clichés to suggest that the gearlever falls easily to hand? Well, it does that, too, topped with a cool, spherical knob.

Anyway, the ride. It’s controlled in Sport, and I suspect for the most part you’d be inclined to leave it there. Select Comfort and you can imagine that it all gets a little softer with a requisite loss of body control - fine around town or on a motorway but rarely strictly necessary. Flick the other way and it’ll be too jittery for most roads, and the steering gains more weight again. The engine response ramps up too, as does the speed of the newly fitted auto-blip system, which rev-matches on downshifts to save you heel and toeing. I quite like heel and toeing, though, and you can turn the system off, but you can’t do it while the car is moving because it’s buried deep within Honda’s summarily awful infotainment system. 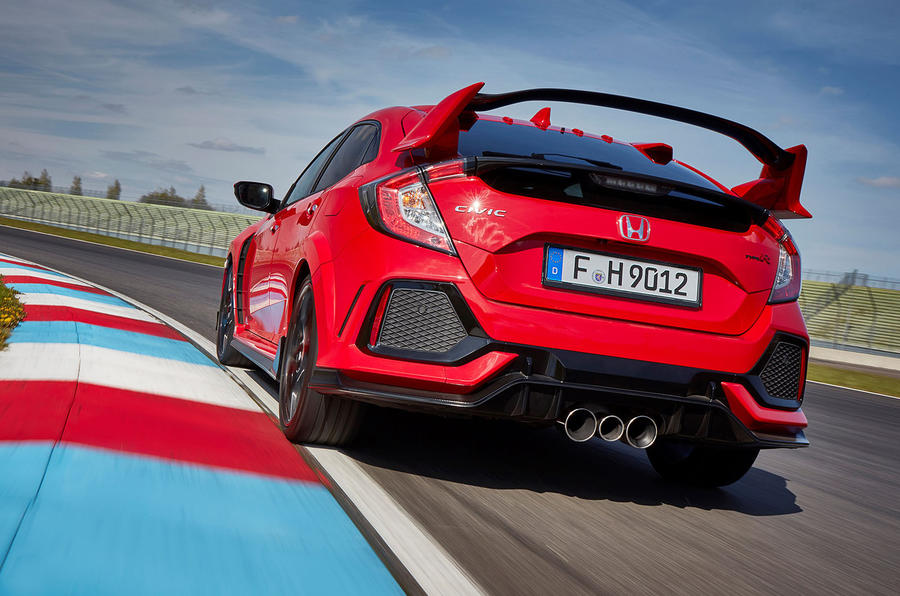 Were there an Individual drive mode (which there isn’t) in which you could select different elements from the car’s character, I suspect I’d have the engine in +R, blip off, steering in Comfort and dampers in Sport. But given how complicated the touchscreen makes even the simplest things, I doubt doing so would come easily.

The driving controls are good, though. The steering is accurate, responsive and well geared. As a result of that and the aerodynamics, the Civic Type R is an exceptionally stable car even above 150mph, a speed it reaches easily, given that it has that fulsome 316bhp at 6500rpm, 295lb ft from 2500-4500rpm and 7% shorter gearing than the previous Civic Type R.

There’s some turbo lag, of course. I can’t imagine circumstances in which there wouldn’t be, given that it has 158bhp per litre. It’s at its worst at low revs but hangs around through the mid-range a bit, too, to the extent that you sometimes have to pre-empt the moment you’d want to get back on the power, even on a circuit.

On track, though, the Civic is exceptional. It feels keener, lighter and more agile than the Volkswagen Golf R or Ford Focus RS - which, at 1380kg at the kerb and with only front driven wheels, it should well do. But although it has mammoth amounts of power going through the front wheels, this isn’t a car that forces you simply to manage where the front end goes. Changes Honda says it has made to the Type R’s character include giving it more toe-in at the rear under braking, to enhance stability. But there’s more engagement and involvement to it than that. There's more poise, and a tiny amount of adjustability on the throttle - albeit not as much as in the Renault Mégane RS 275, in which lifting or trailing the throttle shifts the car’s line immensely. The Civic, meanwhile, always remains secure. If I were to do a track day, I’d want to make my sessions short and take a torque wrench and trolley jack, to swap the 20in fronts and rears around so I didn’t muller the front pair in a day, but the Type R copes with hard throttle inputs remarkably well, given what Honda has asked it to do. 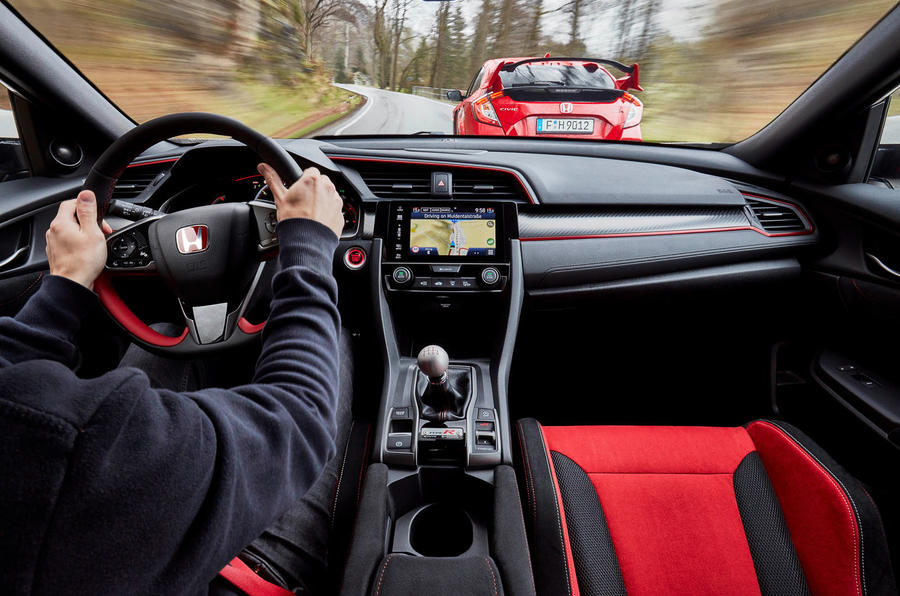 Does it torque steer? A little, although hard acceleration on the road out of corners usually just brings a certain numbness to the steering, rather than any more corruption than that. On a circuit, higher cornering forces do translate to some steering feel, while brake feel is excellent, and even in +R mode there’s sufficient suppleness to run kerbs and give an indication of how the body is balanced.

After you drive it fast, it’s easy to see where the Honda’s lap times come from. It feels thoroughly well sorted, and that it puts vast power through its front wheels is far from its only trick. It has a finely judged chassis with copious amounts of grip, no little poise and good amounts of feedback.

In the just-departed Civic Type R, Honda offered much of that performance but coupled it with an experience that was a bit wearing from day to day. This time around, though, with the addition of the Comfort setting and a general reassessment of entirely how focused the Civic should feel in everyday driving, the Civic’s appeal has been broadened. The beauty is that they’ve managed to do it without diluting the underlying appeal of a car that puts pace before pretty much everything else it does.

So away from the all-wheel-drive, all-weather mega-hatches, the Honda Civic Type R remains alone, with a fundamentally appealing character unlike anyone else’s hottest hatchbacks. And there’s quite a lot to like about that.

Total failure in Indy racing? There are only two engine manufacturers this year, Honda and Chevrolet. Guess which one has the most wins so far? Just because Alonso's engine went pop doesn't mean they've been a failure...
5wheels 14 June 2017