This shaves a significant 5.41sec from the previous record holder, the Volkswagen Golf GTI Clubsport S, and makes the new Type R 6.8sec faster around the ‘Ring than its predecessor.

The new lap record holder is described by Honda as being a development model with technical specifications representative of the final car. Like the production car, it uses a 316bhp and 295lb ft VTEC turbocharged 2.0-litre engine. 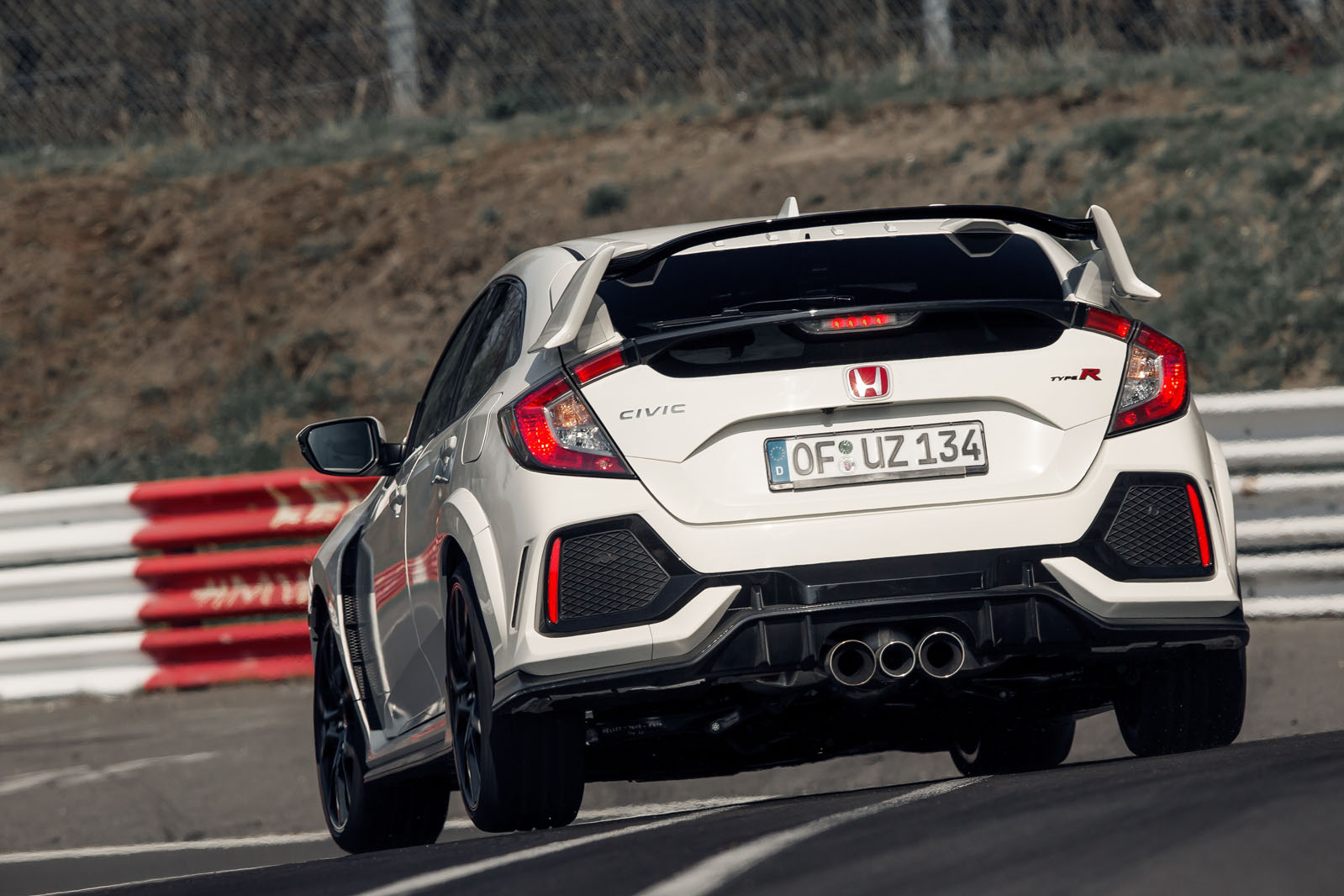 The latest model’s six-speed manual gearbox also has shorter gear ratios for more urgent performance, and the car weighs 16kg less than its predecessor, at 1366kg. No straight-line performance figures have been revealed yet, but the car will almost certainly undercut the 5.7sec 0-62mph time of the previous one.

Honda’s 10th-generation Civic structure has upped the torsional rigidity of the Type R by 16%. It also uses new multi-link rear suspension for improved stability and has a bodyshape that is claimed to offer a best-in-class performance balance for lift and drag.

Honda set the new ‘Ring record during the final phase of testing for the model, on a dry track with “optimum ambient temperature for the best tyre and powertrain performance”. The car’s only modification was a 'floating' roll cage that Honda said offered no improvements to rigidity. To compensate for the cage’s weight, the infotainment system and rear seats were removed. 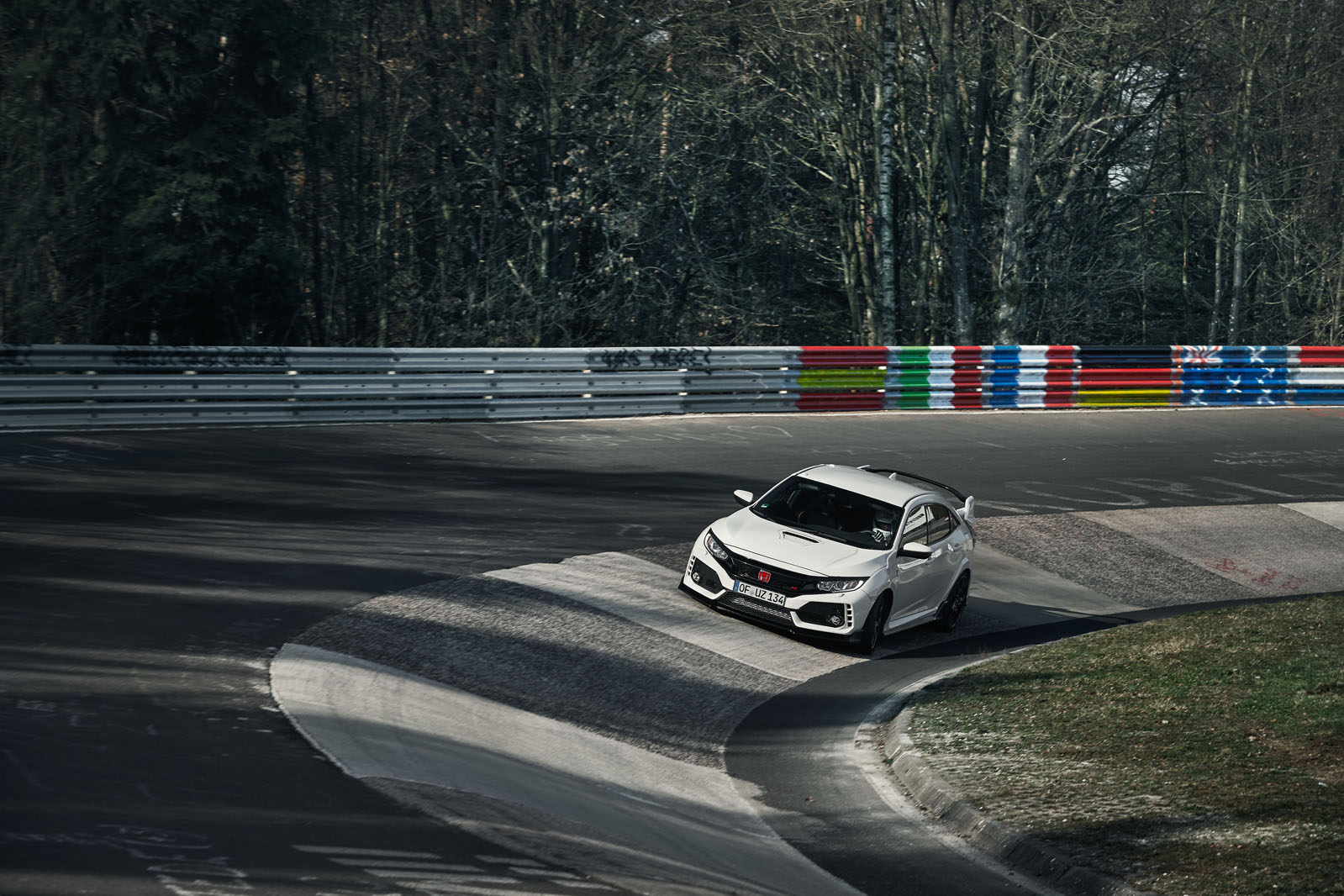 The lead chassis engineer for the new Civic Type R, Ryuichi Kijima, said: “The cornering speed achieved in the new Type R is higher because the car features a wider track and tyres, a longer wheelbase, new multi-link suspension in the rear and optimised aerodynamics that improves stability.“

Kijima explained that this allowed drivers to attack apexes with more pace. “Drivers typically enter the corner after Metzgesfeld at around 93mph," he said. "Even at this medium-speed corner, the speed is around 6mph higher [than the previous car].”

Production of the new Civic Type R will begin at Honda UK’s plant in Swindon this summer, before going on sale in the autumn. Prices are expected to rise compared with the previous car’s £30,200.

I beg to differ

I have only just read this article so I am a litle late to comment however I beg to to differ with the majority of comments here.

Just as motorsport improves the breed so does testing production cars on the Nurburgring. The results filter down to other production cars that are somewhat less sporty. In addition the fastest models do have a proven halo effect on those buying from the same brand.

The car looks the way it does because of the effort that has gone into improving the aerodynamics of the vehicle not to make it look like like a teenagers pinup. The car is the only vehicle in its class to generate real downforce which contributes to a lap time that is faster than the latest generation Porsche 718 Cayman S, a two seater that costs £20k more.

It may not be for you but don't knock the achievement especially as it is manufactured in Swindon for worldwide distribution.

In the interests of full disclosure I have no connection with Honda other than I own a Honda S2000 and I am retired so not a boy racer.

This is absolutely brilliant news for anyone who lives in Meuspath and works in Adenau.
lamcote 25 April 2017

It does seem odd

that anyone would design a car that is way too big and frankly embarrassingly ugly and then go to the trouble and expense of setting a record like this to try to make the car seem appealing. Surely it would be far more sensible to design a more appropriate and attractive car in the first place, I feel sure that would be a much better strategy? Maybe Honda will work that out one day?
View all comments (22)