From £30,9959
Revised hot hatch is joined by less lairy and more lairy versions, but we try the Goldilocks middle child
Open gallery
Close

This is the 2020 Civic Type R, meaning a subtly tweaked version of Honda’s hottest ever hot hatch. In fairness, there wasn’t a lot wrong with the original - known as the FK8 by savvy Civic spotters - that made its debut in 2017.

The second generation of turbocharged Type R, it did a fine job of melding spectacular straight-line pace with a chassis that magically blended acrobatic agility and adjustability with cast-iron control and just enough comfort. It was arguably one of the most complete cars of its type, with its pace, poise and practicality helping it nail the hot hatch brief to the letter.

So it comes as no surprise to discover Honda hasn’t deviated too far from the winning formula with this update. In fact, it has added some extra bandwidth to the line-up, bookending it with the inclusion of a both a more subtle Sportline model and an extreme Limited Edition.

All the versions of the new Type R are treated to the same tweaked nose that features a 13%-larger grille for improved cooling. Drive hard on a track and the new car is claimed to keep engine temperatures 10deg C lower than before. There are also some tweaks to the aerodynamics around this area to offset the change in aero balance created by the bigger intake. Overall though, the visual upgrades are of the ‘blink and you’ll miss them’ variety.

Under the skin are new two-piece front brake discs that have been tuned for better pedal response and improved cooling. Behind these are stiffer bushes in the front suspension that increase longitudinal stiffness by 10%, while at the rear there’s 8% more lateral control. While they were there, the engineers also gave the adaptive dampers a digital massage, with an increased sampling rate helping them react faster in all three (Comfort, Sport and R+) driving modes.

The changes are minimal inside but reserved for the most important areas: the steering wheel and the gear lever. The former gets an Alcantara-trimmed rim, while the latter gets a new, egg-shaped aluminium knob that has been carefully weighted for an improved shift action.

As for the new models, the Sportline comes on stream early in 2021 and is the Q-car (relatively speaking) of the range, with its deleted tea tray rear spoiler, smaller (19in) alloys and seats trimmed in sombre black rather than the retina-scorching red of the standard car. It’s still clearly a Type R, but its lower-profile wing makes it a little less yobbo.

The Limited Edition is claimed to be the most extreme Type R yet. Just 100 are being built for Europe and all are identified by their black roof panels, door mirrors and bonnet vent, plus the lighter BBS forged alloy wheels that are wrapped in Michelin Pilot Sport Cup 2 rubber. There are also some tweaks to the dampers and steering maps to compensate for the reduction in unsprung mass and increase in grip.

Inside, there’s no infotainment or air conditioning, while lots of sound-deadening has been ditched. The result is a car that tips the scales at 47kg (10kg of that comes from the wheels) less than the GT.

In all other respects, the cars are as before, with the same 316bhp turbocharged 2.0-litre four-cylinder engine under the bonnet that drives the same front wheels through the same six-speed gearbox and limited slip differential. 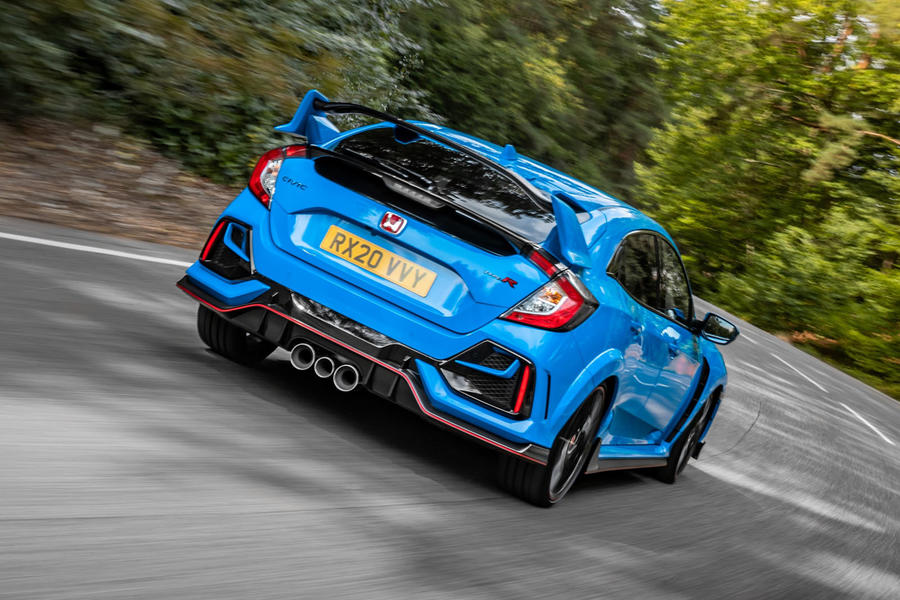 You’ll perhaps be unsurprised to discover that the new Type R feels quite a lot like the old one. And that’s really no bad thing. We drove it on the road in flagship GT spec and, as very rapid and entertaining hot hatches go, the Honda is still very near the top of the heap. Yet small though the changes are, they do make a difference.

The first thing you notice is that the six-speed manual gearbox is even better to use. That reprofiled and carefully weighted aluminium knob makes for an even sweeter shift action, plus it’s nicer to hold than the slightly oversized spherical affair in the old car. Its short throw and mechanical action have you slicing up and down just for the hell of it. That Alcantara wheel feels good in your hands, too.

Then there are the brakes, which have an even more positive initial bite and feel a mite more progressive when pushing on. You can modulate your pressure on the pedal perfectly, with every extra squeeze of effort having a precise and proportionate effect on your retardation. It means you can brake deep into corners and slowly bleed off as you turn in, the whole operation feeling fluid and smooth.

Perhaps less noticeable are the changes to the suspension, which in anything other than Comfort mode remains on the firm side of acceptable. On the typically well-surfaced but lumpily foundationed Oxfordshire roads of our test route, the Type R demonstrated excellent control, but any high-frequency undulations made it a little jittery. It’s never truly uncomfortable, however, with the sharp edges always being nicely rounded-off, which is especially impressive when you consider those 20in rims are covered in tyres with a skinny ‘size zero’ profile.

As with the old car, Comfort will serve you well for 90% of the time. Driven at eight tenths in this mode, the Type R breathes nicely with the road yet still corners flat and fast, The lighter steering won’t be to all tastes, but it has a progressive rate of response and just enough feel to keep you informed.

And what you’re being told is that there’s bags of front end grip on turn in, while the aggressive (but not too aggressive) limited-slip differential doles out excellent traction out of slower corners. However, get greedy with the throttle and the turbocharged engine's 295lb ft of twist will result in some subtle torque steer weave and a flicker of traction control intervention in second and third gear.

Go a bit harder, flick through to Sport (as before, hardcore R+ is best left alone on the road) and the car feels even more tightly tied down. Yes those rapid-fire undulations in the road do get it pogoing a little, but overall the control and composure are impressive. The Type R simply demolishes B-roads and as a point-to-point machine is hard to beat.

There’s lots of grip, but it feels adjustable, too, with a little lift of the throttle or brush of the brakes bringing a subtle change in attitude that allows you to place the car just so. It’s impressive stuff, and your mind boggles at the magic that has been weaved on this front-wheel-drive chassis.

In all other respects, it’s pretty much the same as before. The sound synthesiser for the plumbed-in engine noise has been treated to some manipulation of its ones and noughts for a more ‘authentic’ sound (it’s better than most), but the blown four-pot still delivers a very heft punch. There’s the same rich seam of low and mid-range muscle, plus the familiar VTEC rush for the redline as the revs pass 5000. Roll-on acceleration is startling and there are few hot hatches that dispatch slower moving traffic with such alacrity.

And when you’re not driving to end it all, the Type R is still a Civic, which means it does all the family car things well as well. Yes, the red-accented interior is a little startling (that’s where the Sportline comes in), but there’s space for five and a massive boot, plus all the kit you’re ever likely to need.

That’s less true of the 47kg-lighter Limited Edition, which loses air-con and any sort of infotainment. What’s it like? Well, we only got a few laps of a circuit to sample it, but it was very quick and very grippy. Compared with the standard car, you could brake later, carry more speed through the corner and get on the throttle earlier. However, much of this performance gain is likely down to those gumball Michelins rather than any diet, and our sneaking suspicion is that a standard car on the Cup 2s would be only a biscuit behind it on pace. 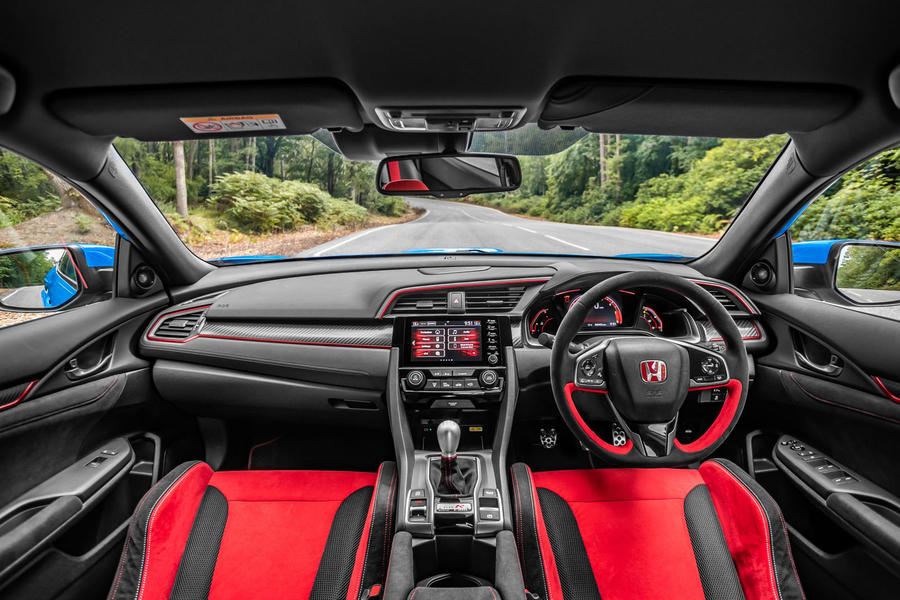 Even before these changes, the Type R was one of our favourite rocket-shoppers - and these subtle but well chosen tweaks do nothing to change that view. It’s still on the firm side for UK roads, but it never becomes uncomfortably harsh, while the performance and poise benefits mean that it’s a compromise worth making. For getting from A to B as fast and entertainingly as possible on typically tight and twisty British secondaries, the Honda is up there with the best.

Better still, with prices starting at £32,820 for the standard car, it even represents decent value, matching the Renault Mégane RS 300 Trophy and very likely undercutting the new Volkswagen Golf GTI.

The case for the £39,995 Limited Edition is a little less compelling, because we suspect much of its performance gains come from its tyres, while the loss of air-con in particular seems less weight-saving and more a marketing-led push for track cred. Still, there are only 20 of them in the UK, and they’re all sold. 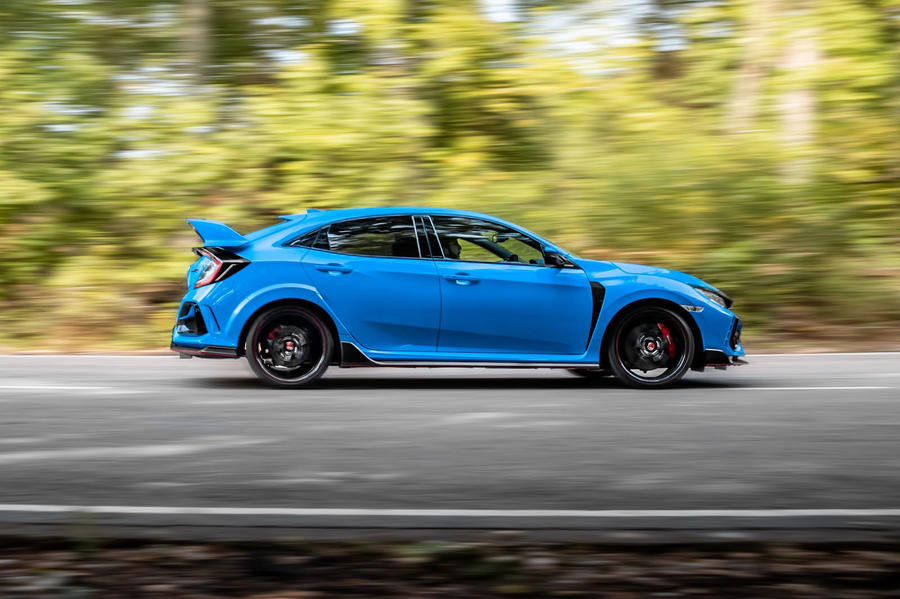 An unorthodox opinion. I actually prefer the outgoing model!

I decided to ignore what appears to be basically Honda marketing department led changes and replace my excellent much-loved 2017 FK8 with one of the last '2019' models (built just pre-lockdown), benefitting from a hefty discount and better trade-in prior to the 2020 car launched.

Reasons: obviously a personal opinion with a side-order of practicallity but, Alcantara steering wheels have no place in road cars (unless used with gloves), there's the inevitable wear and they are, ironically (if this stuff bothers you) an ideal Covid breeding ground!... digital sound enhancement?... on a Honda Type R?... there was nothing wrong with the way the old car sounded, fairly quiet yes, but that's a turbo four for you. Again, nothing wrong with the way the old car stopped either, so I wouldn't be surprised if the move from cross-drilled brakes aren't simply a cost-saving or just a supplier change. I do love the new blue, but feel it's overkill on the heavily styled body anyway. So that just leaves the new 'weighted' gear knob - which I'm sure I can retro-fit to my Championship white car if I so wish!

This has to be my favourite hot hatch

Looks amazing in blue. Glad they now provide the 'toned down' version as an option.

Greetings! Very useful advice in this particular article! It is the little changes that make the most important changes. Many thanks for sharing! By the way, if you're want to Buy Online Red Snapper Fish? Then feel free and visit our website.

Greetings! Very useful advice in this particular article! It is the little changes that make the most important changes. Many thanks for sharing! By the way, if you're want to Buy Online Red Snapper Fish? Then feel free and visit our website.

Shut up and take my money!