According to Ford’s own research, exterior design isn’t simply one of the factors that drives SUV purchasing decisions; it is actually the most important factor. Never mind the badge on the nose, the quality of the cabin or the anything remotely connected to the driving experience. No, what most people in the market for a large 4x4 care about first and foremost is the way a particular model looks.

Ford’s biggest and most expensive family car has been overhauled only a couple of years after it first arrived in the UK. In line with its own research, Ford has worked especially hard to improve on what one senior designer described as the outgoing version’s ‘heavy-handed’ styling. The sculpted bodywork and sharply raked C-pillars remain, but the front end is more sophisticated now while the rear loses its full-width light strip at a time when seemingly every other manufacturer is beginning to adopt them.

The cabin has been reskimmed with smarter door mouldings and a slick rotary gear selector that does away with the previous model’s woefully outdated gearlever. This updated version is equipped with all the usual driver assistance systems you’d expect of a new large car in 2018 - think blindspot assist, front collision avoidance and automatic parking - which Ford collectively labels Co-Pilot 360, and there’s also Ford Pass Connect, which incorporates a full suite of connectivity options.

The three-strong model range is made up of the Titanium from £36,995, the new ST-Line from £42,995 and the range-topping Vignale, tested here, which starts at £45,995. That’s more expensive than the cheapest Range Rover Velar. Delve a little way into the options list and a Ford Edge Vignale could well roll out of the showroom costing £50,000. Ford has a long history of offering large, grown-up family cars that sit atop its line-up, but to choose a top-spec Edge ahead of any number of SUVs from premium manufacturers such as Land Rover, Mercedes, Audi and BMW, you would need to be a particularly devoted Blue Oval fan, or otherwise be wholly unbothered by brand, image, impressing the neighbours and all the rest of it. 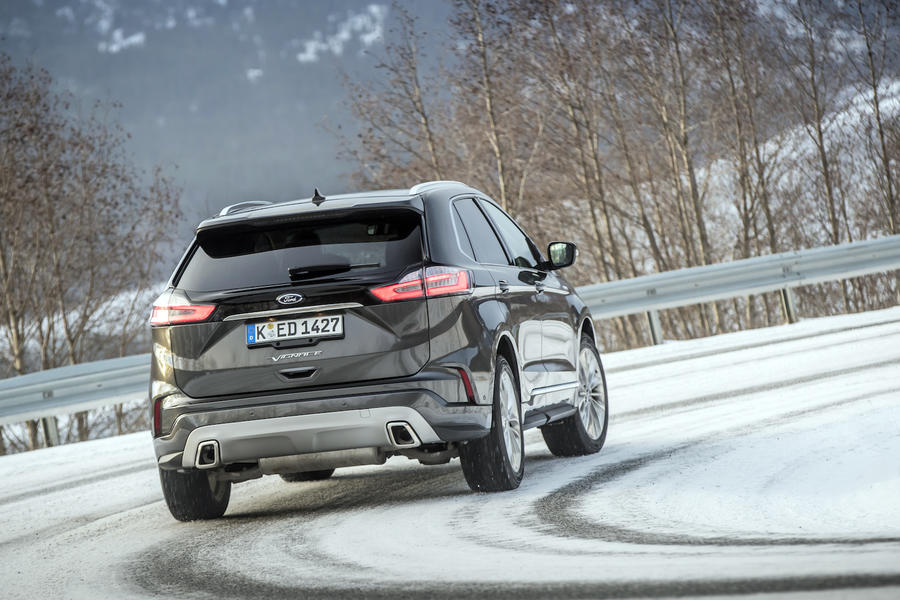 One of the most significant mechanical updates is the introduction of a new four-cylinder diesel engine that uses a pair of turbochargers to develop 235bhp and 369lb ft of torque. It is very well suited to a sizeable SUV - and at 33mm longer than a VW Touareg the Edge really is sizeable - pulling with muscularity throughout its rev range while also being extremely refined and near enough silent in normal driving. Ford claims up to 42.2mpg on the combined cycle.

The eight-speed automatic gearbox that replaces the outgoing dual-clutch is smooth and unflustered to the point that you don’t ever think about what it’s up to. You can take manual control using the steering wheel-mounted paddles, in which case gearshifts are hardly snappy, although a vehicle of this type is in no way hindered by slightly lethargic shifts.

What completes the overhaul of the Edge’s drivetrain is a new, intelligent all-wheel drive system that can decouple the rear axle entirely to save fuel. Ford says this alone reduces CO2 emissions by 6g/km. Like the outgoing Edge, this new model uses a heavily front-biased all-wheel drive system, but it can now engage the rear axle much more quickly and seamlessly so that even in very low grip conditions you aren’t aware of the systems hurriedly shunting torque rearwards. To use one Ford engineer’s own words, there is no longer a ‘step function’.

Relatively minor suspension revisions have been made to account for the extra weight of the new drivetrain, while the steering gets only fine tuning rather than any major reengineering. Nonetheless the Edge steers well enough, while the ride is smooth and settled and body control in corners more than adequate for this sort of machine. The Edge is no purpose-built off-roader by any means, but it has the traction and ground clearance to cope with the muddy field, snowy lane or gravel track that will be the limit of most buyers’ needs. A tow bar can be fitted optionally for £750. 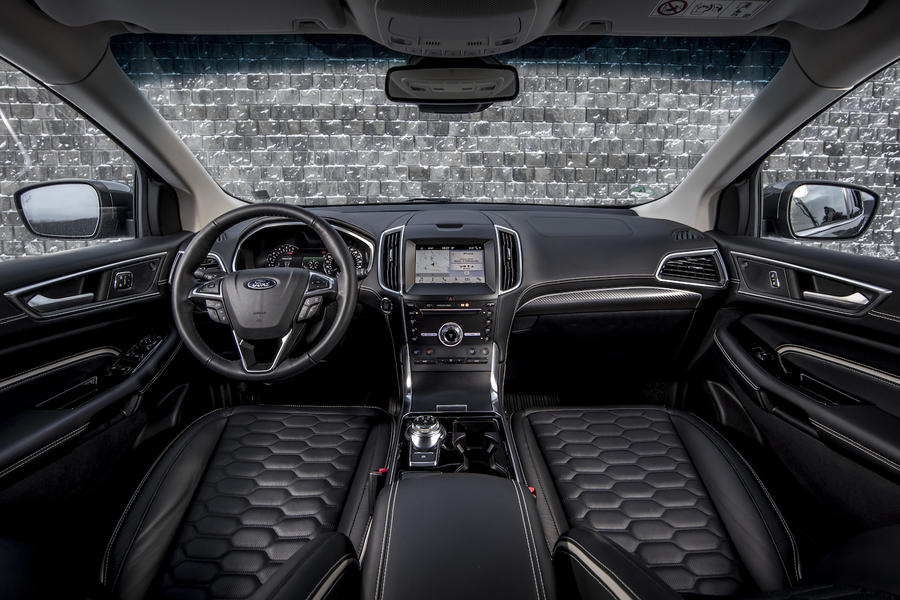 What the updated Edge has on its side is a very good powertrain, a mature set of driving dynamics, plenty of cabin space and more toys and gadgets than most buyers will ever bother using. Its cockpit isn’t the most plushly appointed in this sector of the market and the badge on its prow certainly doesn’t have the draw of, for instance, Mercedes’ three-pointed star. Priced at £45,995, meanwhile, this Vignale model doesn’t have irresistible value on its side, and nor does the entry-level Titanium at £36,995.

This mid-life facelift isn’t enough to nudge the Ford Edge further up the 4x4 ranks, but it certainly is enough to stop it from slipping any further behind the opposition. 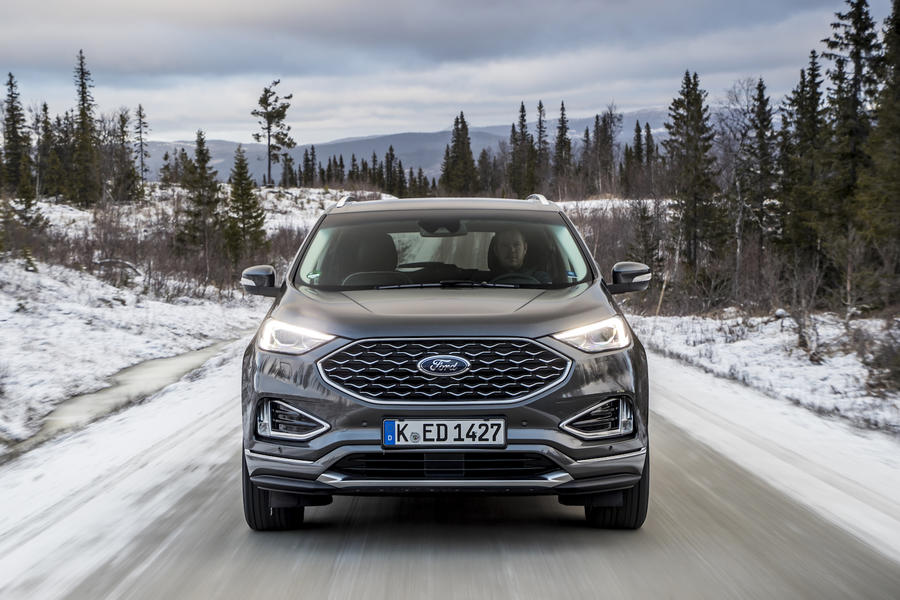 My neighbour has an A3.  It doesn't impress me.  I think he's a top bloke who knows nothing about the technical aspects of cars!

Ford needs to vigorously wield a billhook to remove a couple of hundred kilograms from this grossly overweight piece of kit.

It looks so "American"

European Ford's always had European looks, but this "One Ford" styling especially on the Edge looks so, so American!!! Look at the pattern on the seats!!!!!! Look at the poor quality plastics on the steering wheel showing the sink mark.

And why does Henry Ford & co. go on about Brexit being a desaster all the time when cars like the Edge are imported into the EU from the US???? The real reason is because most of their products are sold in the UK & built in expensive plants in Germany & Spain.

European Ford's always had European looks, but this "One Ford" styling especially on the Edge looks so, so American!!! Look at the pattern on the seats!!!!!! Look at the poor quality plastics on the steering wheel showing the sink mark.

And why does Henry Ford & co. go on about Brexit being a desaster all the time when cars like the Edge are imported into the EU from the US???? The real reason is because most of their products are sold in the UK & built in expensive plants in Germany & Spain.

On the contrary, Euro Fords

1 December 2018
On the contrary, Euro Fords have always adopted US designs, albeit scaled down and therefore lacking the fine proportions of the original. Remember the finned Mk3 Zodiac? The tiny Anglia with the reverse-slope rear screen? The coke-bottle Cortina? These and many more... all of them emasculated pastiches of the real thing.

For what it's worth, the Edge is made in Canada.

Ford, in common with many other businesses, are concerned that the UK leaving the EU would be followed by restrictions on cross border trade, a matter of considerable importance to companies who sell and source globally.

Ford products sold in the UK are sourced from all over the world, in many cases from low cost areas so the Transit is from Turkey, the Ranger from Thailand and the Ka+ from India.

1 December 2018
Is the Edge heavy because its based fundamentally on an updated 2005 mondeo platform , like it's s max, mondeo and galaxy ? I may be wrong however.

The answer is of course no,

1 December 2018
The answer is of course no, it is too expensive for the badge.