Ford has announced plans to launch five all-new or redesigned SUV and crossover vehicles across Europe in the next three years.

The drive to increase Ford’s SUV sales by 200% by the end of 2016 starts with the arrival of updated versions of the mid-size Kuga and EcoSport compact SUV, both due by the end of the year.

The new Kuga will see the introduction of new colour options and an enhanced multimedia system. The new multimedia system, SYNC 2, has an 8in touchscreen that controls the climate settings, sat-nav functions and Bluetooth. The system features voice activation.

The Ecosport facelift loses its rear mounted spare wheel in favour of a tyre mobility kit, and the updated car will offer improved refinement, performance and sharper driving dynamics.

Early 2016 will see the introduction of the firm’s large SUV, the Ford Edge. It will make its debut at the Frankfurt motor show next week. The Edge will also be offered in the UK for the first time.

Two crossovers are then expected to join the range, based on the Fiesta and Focus.

The ambitious targets will see all-wheel-drive vehicles account for 50% of all Fords sold by 2016, when the option will be available on the Mondeo, S-Max, Transit and Galaxy models too. The new Focus RS was released with the new Ford Performance AWD with dynamic torque vectoring earlier this year, and the Ranger pick-up is currently offered with driver-selectable 4WD.

A Ford-sponsored survey in Europe indicates that the SUV sales boom is set to accelerate, with a drive from buyers aged between 17 and 34. 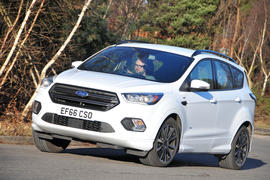 Anyone who has driven in snow will advise how invaluable 4wd is.

Ban them from towns and cities - daft idea but you could ban TV adverts (Nissan please note!) showing them being used primarily in the city!

Just what the world needs -

Just what the world needs - more off-roaders on the roads. If all the tarmac roads were dug up and replaced with gravel and mud with tree roots sticking out, the owners of these things would complain, yet that is what the jeeps they are driving are for. The entire jeep fad is ridiculous. Using trucks in place of cars, where it is totally unnecessary. Very frequently by people who clearly cannot handle their size properly. Users of all these jeeps like to talk about the "great view over the traffic ahead" and "feeling safer than in one of the little cars around me". Well the way it's going in the next few years the vast majority of vehicles on the road will be jeeps, so what of the view over the traffic then? And how safe will they feel when all the surrounding vehicles are as big? Unimogs on the school run, that's where we're headed. Then it'll be Kenworths after that. It's nothing but a pathetic arms race, and they should be excluded from towns and cities, and confined to where they belong, going up the sides of mountains.
scrap 10 September 2015

AWD to account for 50% of all Fords sold by 2016? Really? This can't be right. Fiesta and Focus aren't available with AWD (except niche RS) and optional elsewhere. Most people outside USA snowbelt and the Alps would be better off saving their money.
devil's advocate 10 September 2015

AWD to account for 50% of all Fords sold by 2016? Really? This can't be right. Fiesta and Focus aren't available with AWD (except niche RS) and optional elsewhere. Most people outside USA snowbelt and the Alps would be better off saving their money.