7
Share review
The top-of-the-line 6 Series Gran Turismo has arrived in the UK, but does a more potent engine increase its unusual appeal?
Share
Open gallery
Close

This is the biggest-hitting variation of BMW’s ungainly 6 Series Gran Turimso. As such, it's an intriguing proposition, even if it is unlikely to rack up vast sales figures here in Europe, back-seat loving China being the main target market for a class of car that also includes the Mercedes-Benz CLS and Audi A7 Sportback.

We’ve covered the 6 Series GT in considerable depth before – not least by way of a full road test – but this is our first experience of the 640i on home soil. Because the chances of a M-division Gran Turismo are slim to non-existent, it's this model that tops the line-up, with a 335bhp twin-turbo straight-six petrol engine nesteld longitudinally under the bonnet.

Beneath it in the range sits a limited selection of powerplants. And don’t be fooled by BMW’s model taxonomy – the 630i that serves as an entry point is now a four-cylinder petrol turbocharged to develop 255bhp (not a six-cylinder, as the '3' would historically have suggested). The solitary diesel option comes in the form of a turbocharged straight-six tuned to 261bhp and 457lb ft of torque.

While the 640i also comes exclusively with BMW's full-time four-wheel-drive system – xDrive – you've got options with the suspension setup. As standard, the Grant Turismo is fitted with self-levelling air suspension at the rear axle. Adaptive suspension costs £1670 and adds air suspension to the front axle; for your money the dampers will also now be adaptive, meaning the ride height can be dropped 10mm in Sport mode.

For £3340, the Executive Package includes all of the above and adds active roll bars and four-wheel steering, with the respective aims of improving body control and increasing agility. 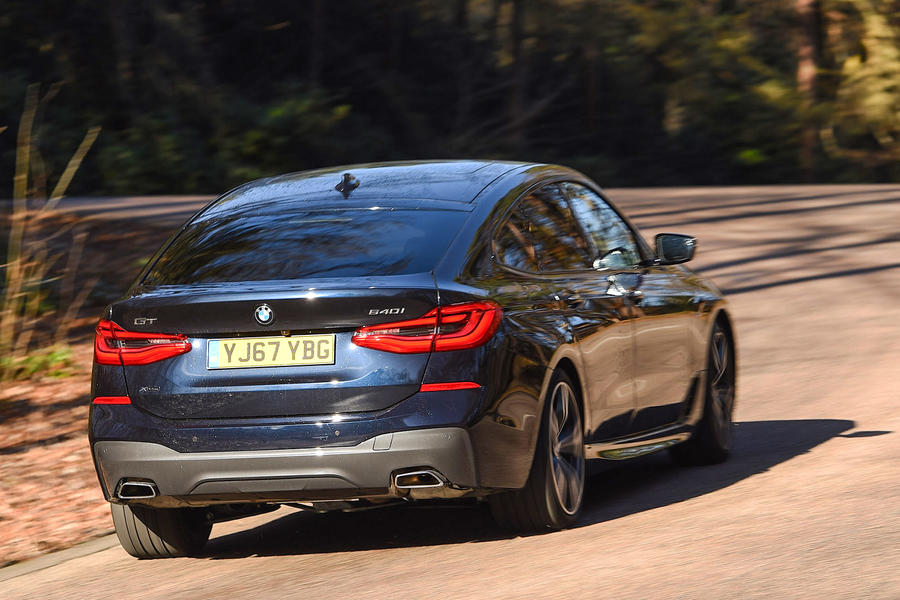 BMW has massaged the dimensions of the car this one replaces – the shorter, taller 5 Series GT – into something quite a bit more palatable, but to our eyes it remains some way short of even the superb 5 Series Touring in terms of kerbside appeal.

It scores substantially better in terms of rational appeal. At 610 litres, boot space with the seats up is better than that of a 5 Series Touring, and the Gran Turismo is also longer where it matters than its predecessor, matching the wheelbase of the 7 Series. Consider also that the seats are positioned 60mm higher than in a 5 Series what you have is a high-rise machine that's exceptionally commodious and – thanks to its engine – has very long legs.

This six-pot is a known quantity, of course, and is so effortlessly effective that it was always going to slip with supreme ease into a luxurious cruiser like this one. A peak torque output of 332lb ft arrives barely above tickover, at 1380rpm, and remains on tap until the tachometer needle has breezed past 5000rpm.

Short-shift using the paddles, wring it out in Sport mode, crawl through town: marshalled by an eight-speed torque converter whose shifts are as smooth as one could reasonably expect, there's never really a point where this big six isn't wonderfully well mannered.

It's an engine matched by the chassis in some aspects but somewhat beaten by it in others. This car weighs some 115kg (or thereabouts) less than the 5 Series GT. That has brought with it an incisiveness to the way direction changes are negotiated, and while the 6 Series GT never really looks like shrugging off its physical proportions, good body control, nigh-unbreakable traction and all that torque make it remarkably easy to place on the road and work through corners.

It's an inert process characerised by security, however, and one that reflects BMW's positioning of the car as a junior 7 Series. The air springs in particular don't convey much in the way of feel, obfuscating the natural body movements you rely on when pedalling a big BMW saloon.

In terms of performance, spending the extra £7000 to go from the rear-drive-only 630i to 640i drops the 0-62mph time by exactly a second to 5.3sec. It's a quick time, though this particular metric is inappropriate for what is essentially a limousine in practical clothes. Piling on speed through the mid-range, and without anybody really noticing, is where this powertrain excels.

If there's a sizeable caveat then it's fuel economy. Our original road test subject – a 630d equipped with xDrive – returned a touring economy close to 55mpg, whereas this 640i could muster only 35mpg. 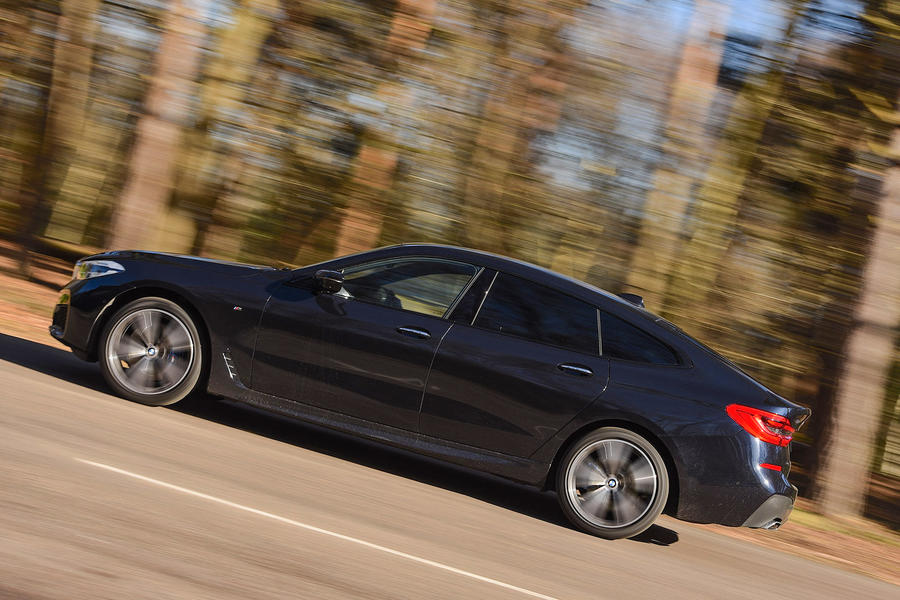 Pinning down a sub-£60,000 rival for this car – one that matches its blend of serentiy and practicality – poses a headache. A similarly engined 5 Series can't meet the standard set here in either aspect, and if you're carrying more than one passenger and so can't fold down the seats, that sentiment applies even to the Touring model. Consider also its understated turn of pace and the 640i Gran Turismo is a compelling package.

Its capacity for ticking boxes is still undermined by the inelegance of its design, however, and so for all but a few the car would be a purchase of the head rather than the heart, which casts this supremely able but unnecessarily expensive 640i M Sport xDrive slightly adrift. There is, of course, also the small matter of the new Audi A7, which places a somewhat greater emphasis on design than this BMW. 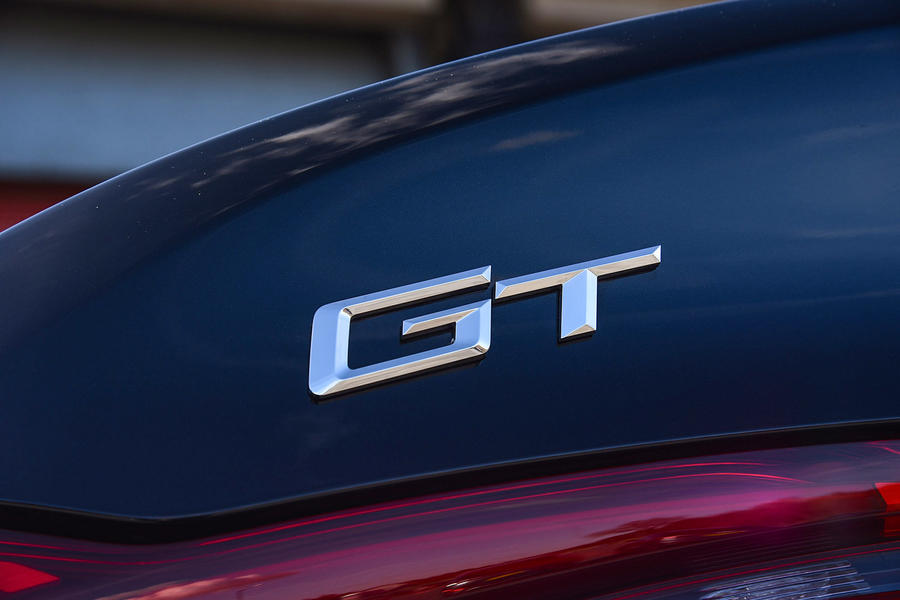 Can't help thinking the German giants have got stuck in a rut of competing against each other in every segment, and now every micro segment, and feel they can't afford to give up with a few of these niche models in case their rivals steal 10000 sales a year.

I'd love to see the economics behind developing these niche products, yes they will sell a few, but enough to make it worthwhile, especially when to an extent they're cannibalising their own range?

just a Mondeo or Insignia for people with a badge complex, only uglier and far more expensive.

pity it is an ugly munter