BACK TO ALL NEWS
Currently reading: New BMW 8 Series to return in 2018
UP NEXT
Rolls-Royce road trip: remembering the marque's epic seaplane racers

The S Class Coupe rival is set to make a comeback next year after a 20-year hiatus; open top variant expected in 2019
Open gallery
Close

The BMW 8 Series will make a comeback next year after a 20-year break - and has been previewed by a bold Concept 8 Series design study.

The luxurious new two-plus-two coupe is planned to return to the BMW line-up in 2018 after an almost two decade hiatus as part of what company bosses describe as the biggest model offensive in the company’s history. The Concept 8 Series is being displayed this weekend at the Concorso d’Eleganza on the shores of Lake Como in Italy, and is the first in a series of ultra-premium cars from BMW.

Speaking at the Concept 8 Series unveiling, BMW board member Ian Robertson said: "We want to bring more cars into the upper luxury segment. We have already announced we are in the development phase of the X7. We are working on other products as we feel there is a lot of opportunity there. The new 8 series is part of this. In the next couple of years we will see the most comprehensive change in the history of BMW."

Set to challenge the likes of the Mercedes-Benz S-Class Coupe at the very top of BMW’s current 12 model strong line-up, the reborn 8 Series will indirectly replace the existing third-generation BMW 6 Series, which is due to cease production in coupe and convertible guises after being superseded by a new fourth-generation liftback model in the form of the upcoming 6 Series GT later this year.

“The 8 Series will be the next model in the expansion of our luxury car offering and will raise the benchmark in the segment,” explained BMW chairman Harald Krüger. “It will demonstrate that razor sharp dynamics and modern luxury car go hand-in-hand, in the process strengthening our claim to leadership in the class.” 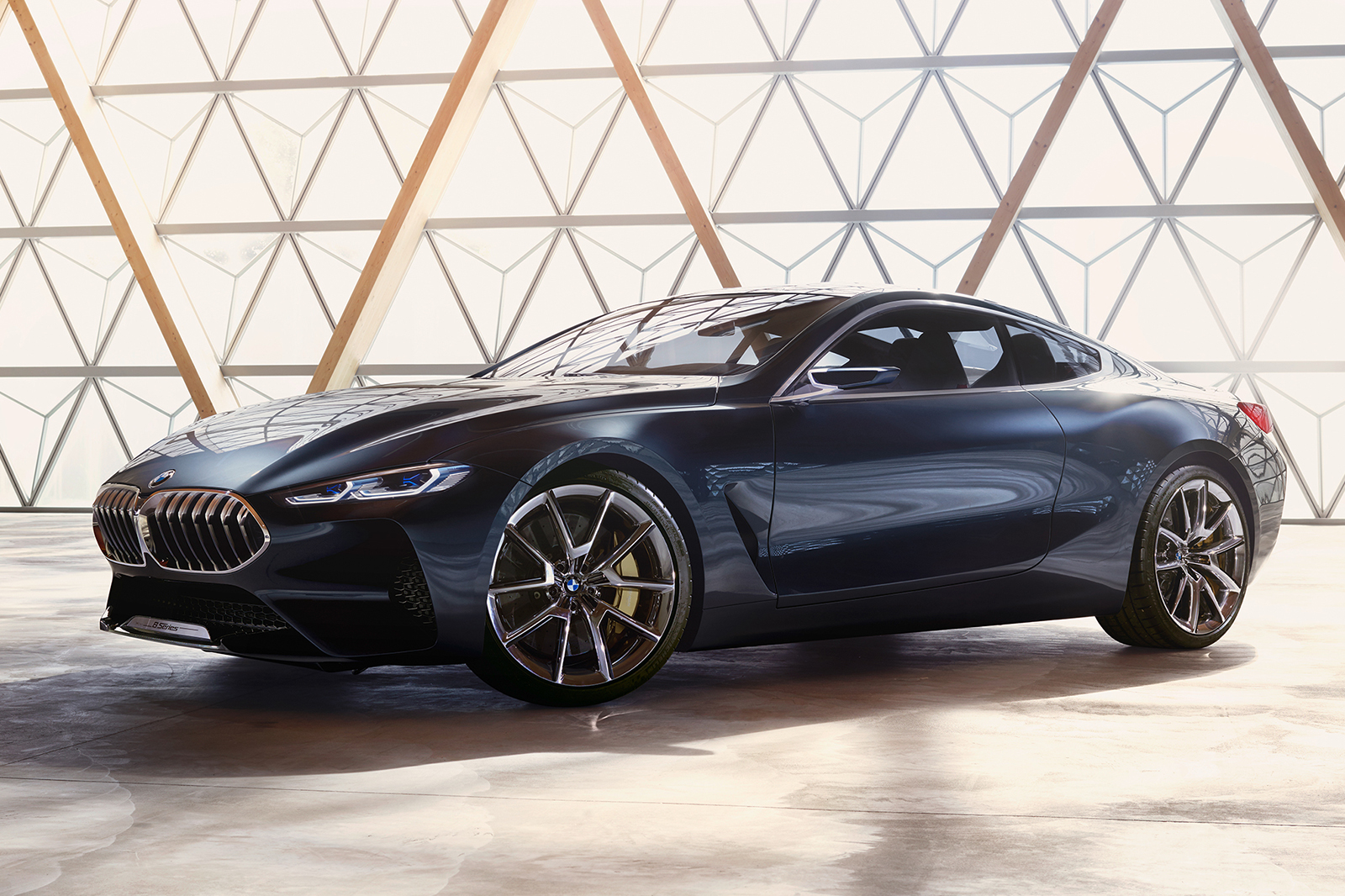 Alongside the bullish coupe variant of the new model previewed by the Concept 8 Series, BMW also has plans for a plush open top version of its new range topping two-door. Set for introduction in 2019, it eschews the folding hardtop arrangement favoured by BMW for its convertible models in recent years for an automatic multi-layer fabric hood.

Design as much as engineering has played a key role in the development of the new 8 Series, which boasts a traditional two door layout and classically hinged boot at the rear. It flaunts a bold look that BMW says will heavily influence the appearance of the next generation models from the German car maker. The exterior design of the Concept 8 series is credited to  John Buckingham, a Brit now working out of BMW's DesignWorks studio in California.

“It showcases a new approach to the use of forms, which is reflected particularly prominently in the surfacing,” says BMW design boss, Adrian van Hooydonk, who describes the new coupe as a full blooded driving machine. “Crisp lines mark out clear surfaces, and the volumes are powerfully sculptured.”

Speaking at the launch, van Hooydonk added: "It is more that just a concept car, it is a very big step in BMW design. It is the start of a new-form of [design] language - cleaner surfaces, more emotion, more sophistication."

The Concept 8 Series, which is described by BMW as a taste of a forthcoming model, has been created to pave the way for the return of the new 8 Series, which is being developed under the internal codename G17. But while its dimensions and overall form will be reflected on the production version of the new BMW coupe, van Hooydonk acknowledges various elements and cues will be altered before it enters UK showrooms during the latter half of next year.

BMW says it has put a lot of time and effort into projecting how the new 8 Series will be viewed on the road. The silhouette features a long bonnet, flowing roofline and upward sweep that helps to provide a sporting flourish to the high set rear. Flared front wheel arches and prominent hunches over the rear wheel arches also provide it with a heavy dose of visual muscle. 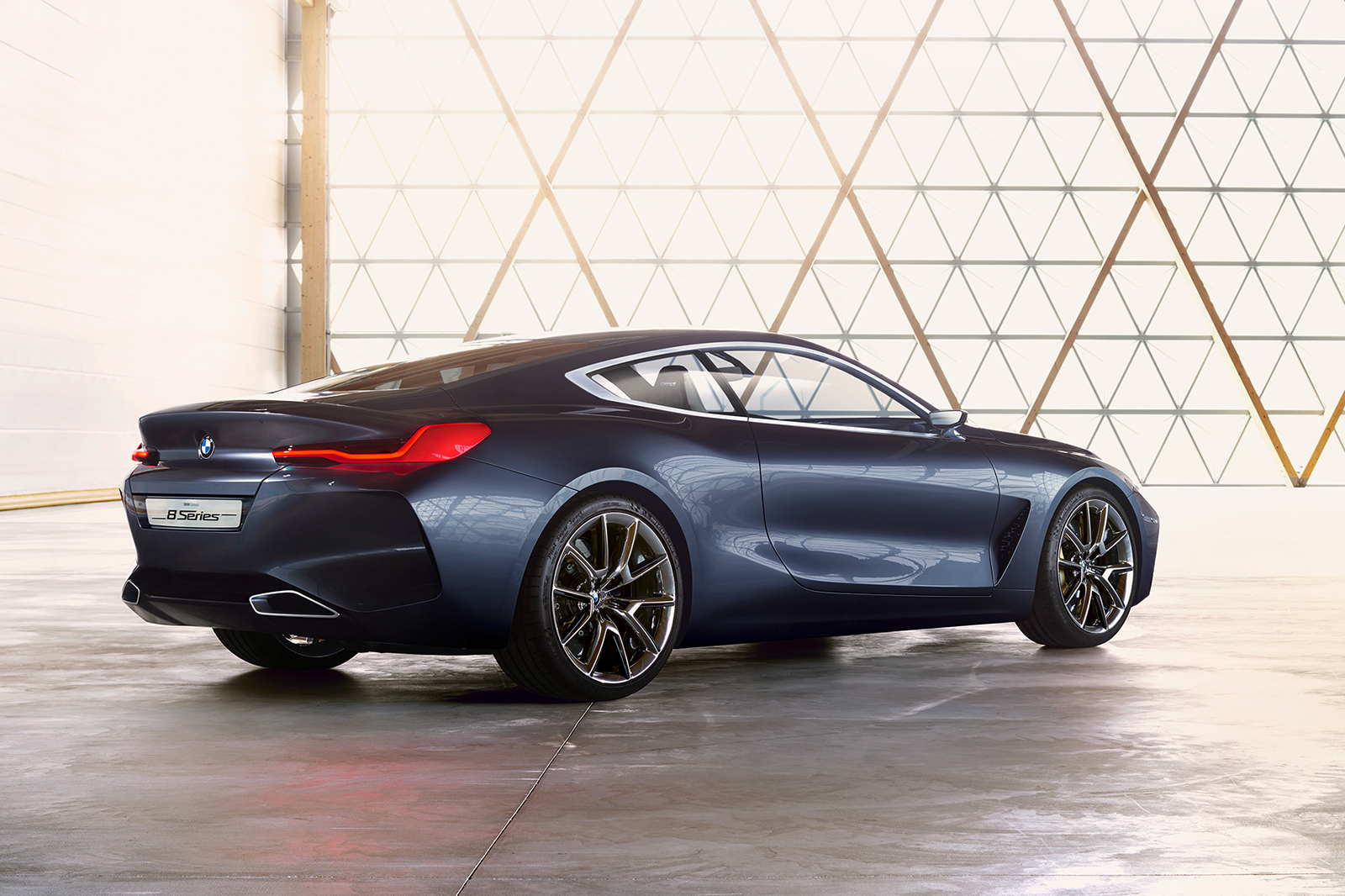 A number of characteristic BMW concept car flourishes, such as the oversized kidney grille, thin line lazer projector touting headlamps, exaggerated air breather elements behind the front wheel arches and within the rear bumper and OLED imbued L-shaped tail lamps, have all be altered with a more conservative appearance for the production version of the new 8 Series, which is due to begin rolling from BMW’s Dingolfing factory in Germany during the second-quarter of 2018.

BMW has fettled its latest rear-wheel drive platform, the so-called CLAR (cluster architecture) structure, in creating the new 8 Series, which receives its own unique wheelbase and track widths to provide it with a suitably low and hunkered down stance reminiscent of the first generation model launched back in 1989. The 21in wheels will be retained as an option on the production car, according to BMW.

Among the hi-tech chassis features set to appear on standard versions of the new range topping BMW is a double wishbone (front) and multi-link (rear) suspension with constantly variable air springs all round as well as an integral rear steer function aimed at providing it with class leading agility.

Portrayed as the most advanced combustion engine road car yet developed by BMW, it also adopts the lightweight construction initiatives found on the existing 7 Series, including the use of plastic reinforced carbon fibre within load bearing structural elements, in a move key officials from the German car maker contend will see the production 8 Series tip the scales at a kerb weight well under that of it key rivals. 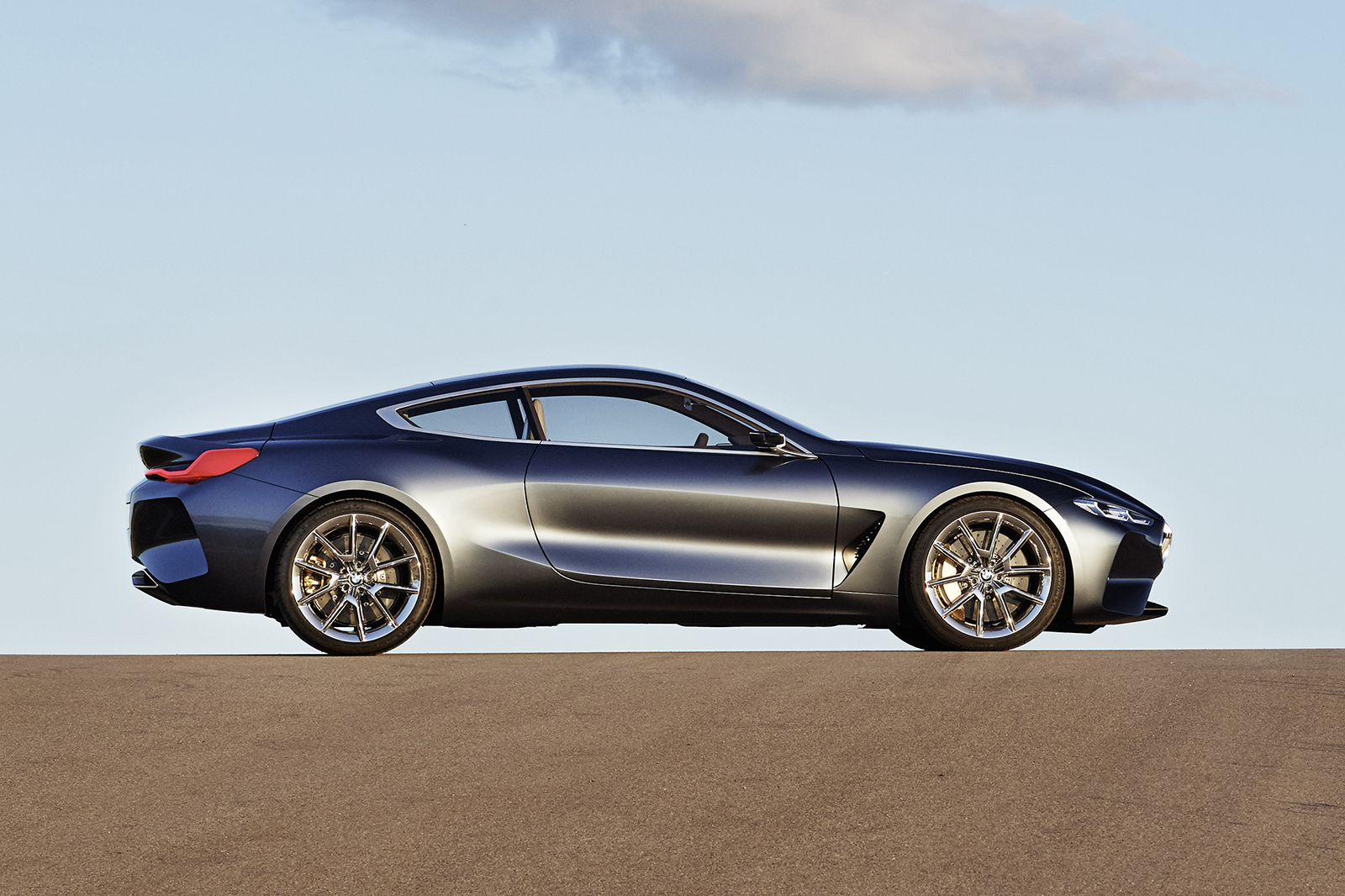 BMW is holding back on details to the drivelines it plans to make available in the new 8 Series, though it is expected to feature up to three standard front, longitudinally mounted petrol units.

Recent trademark applications hint at a likely entry level 840i model running a turbocharged 3.0-litre in-line six cylinder, a 850i with a turbocharged 4.4-litre V8 and M860i xDrive M Performance fitted with the same turbocharged 6.6-litre V12 that powers the M760Li xDrive. Also under consideration is an 840e plug in hybrid model using the same petrol-electric powertrain seen in the 740e iPerformance.

All modes will feature a standard eight speed automatic, with the 840i and 850i likely to offer the choice of either standard rear- or optional four-wheel drive. The M760i xDrive is set to receive four-wheel drive as standard.

The new 8 Series is among three all-new models planned to be added to the existing BMW line-up before the end of 2018 as part of the German car maker’s Number One Next strategy that aims to see it snare back the luxury car sales crown from Mercedes-Benz. Also planned to see showrooms by the end of next year is the X2 previewed by the Concept X2 at the Paris motor show last September and, at the more luxury orientated end of BMW’s burgeoning SUV ranks, the US-built X7.

Looked at the video suggested by PC. What a fabulous looking car inside and out.

On YouTube type in Shmee150,on there you will see in the metal,full walk around inside and out look at this 8series,much better than the pics,go ogle it.......NOW!
Peter Cavellini 26 May 2017

That is not a BMW,well,not from the side profile,could be anything,an Aston,a 90's Jaguar(ouch!!) a touch of Maserati even,nope,this is not BMW's finest work,the Nose in particular it is just awful!!!
View all comments (11)