7
Share review
The new BMW 6 Series GT is a vast improvement on the 5 Series GT and, crucially, drives like a true BMW should. But, overall, it remains an oddball choice in the UK
Share
Open gallery
Close

This car replaces the 5 Series GT, a large five-door hatchback that – to Western eyes, at least - was one of BMW’s less happy models. This new Gran Turismo has joined a new model grouping as a 6 Series and has been redesigned, taking into account customers’ views of the 5 GT's good points and what project boss Claus-Otto Griebel tactfully calls its "less good points". More of which shortly.

The 6 GT rides on the same wheelbase as the latest 7 Series and has grown 8cm in length, most of this devoted to a boot that was one of the previous car’s less good points. Its roofline is 2cm lower and the rear deck lid sits 6cm lower. That realigned tailgate is intended to tackle another ‘less good’ feature, which was the appearance of the 5 GT’s generously dimensioned back end. You still wouldn’t call it slender, but it looks less like a wall of steel when you’re following it. BMW has also ditched the complicated boot-cum-tailgate arrangement and ingeniously built the electric hatchback struts into the tailgate itself, usefully widening the load bay’s mouth.

Despite the lowered roofline, the raised seating position of the 5 GT remains – it’s 6cm higher than in a 5 Series saloon and is a feature liked by buyers, along with the ample cabin space and driving comfort. Rear head room is unaffected despite the sleeker roof. Besides the styling, improving the handling was another priority for the new generation of this slightly curious machine, with Griebel implying that the task of making it corner like a BMW was considered a satisfying challenge by the chassis department.

Their mission was eased by an average weight reduction of 150kg across the range and suspension systems that are a mix of the latest 7 and 5 Series hardware. This can include four air springs rather than the standard rear self-levellers, active roll control and four-wheel steering. A lift-reducing active boot spoiler contributes to high-speed stability, while further aerodynamic refinements include active radiator grille flaps, a front air curtain and turbulence-calming air breathers for the front wheels. The result is a drag coefficient that tumbles to an impressive 0.25 from 0.29.

The UK engine line-up is pretty simple, consisting of a 255bhp 630i petrol, a 335bhp xDrive all-wheel-drive 640i and a 261bhp 630d, all fitted with an eight-speed paddle-shift automatic transmission. 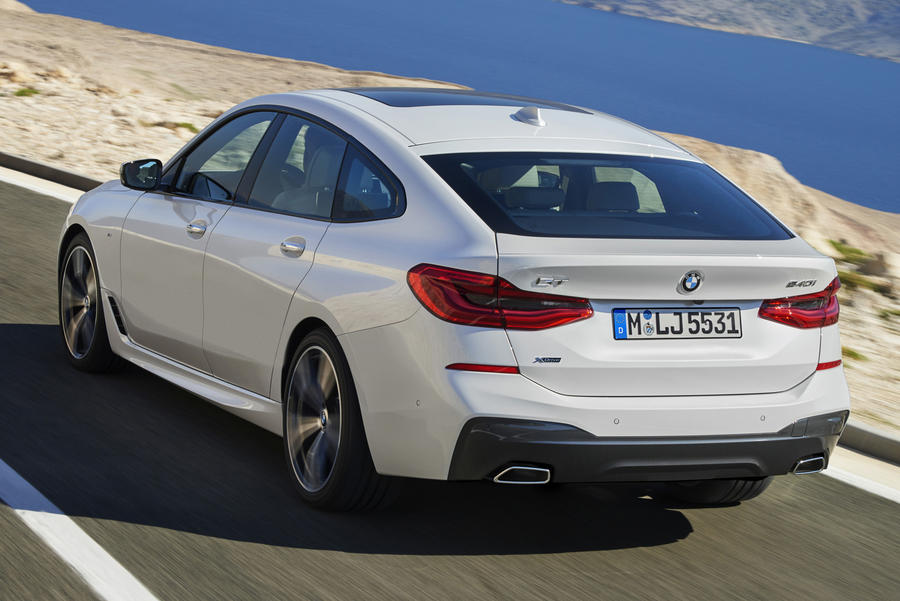 This was a big car before and is an even bigger car now, but because its interior is more finely crafted, it feels cosier and more inviting. The 6 Series GT is intended as a machine in which four can travel all day in considerable luxury and, on ambience and seat comfort alone, it scores highly, especially if a panoramic roof is fitted.

Well over 300 bhp means more than enough go, while all-wheel drive ensures that it’s confidently transmitted to the road. You’ll need to rev this engine to hear the six cylinders that you’ve paid for, with their mildly rorty outpourings quite a contrast to BMW’s silken turbine sixes from the past. The smooth-shifting eight-speeder means you’re only going to find this out if you stretch the GT’s dynamic muscles, though. Aboard the well-girded test car, which came with a so-called Executive Drive pack that includes four air springs, active anti-roll, adaptive dampers and active steering, the 6 GT proves considerably more agile, and willing, than the 5 GT. It can feel big when braking and turning into a tight bend, but the suspension contains its mass well.

More relevant for most potential occupants is the ride, which is excellent in Comfort mode and decently supple in Sport. This remains the case when the GT is cornering hard and hits a bump too – a circumstance that often upsets cars with active anti-roll systems. Also impressive is the GT’s quietness at speed, BMW having gone to some lengths to achieve this through aerodynamics and sound deadening, particularly of the boot, which is apparently as library-like as the cabin itself.

As you’d expect, there’s a huge range of options, with bundles including Rear Comfort, M Sport Plus, Premium and Surround Sound packages, as well as extensive connectivity, chassis, trim and electronic protection systems. Worth noting is that this newcomer to the 6 Series range starts at much lower prices than the 6 Coupé and Gran Coupé. 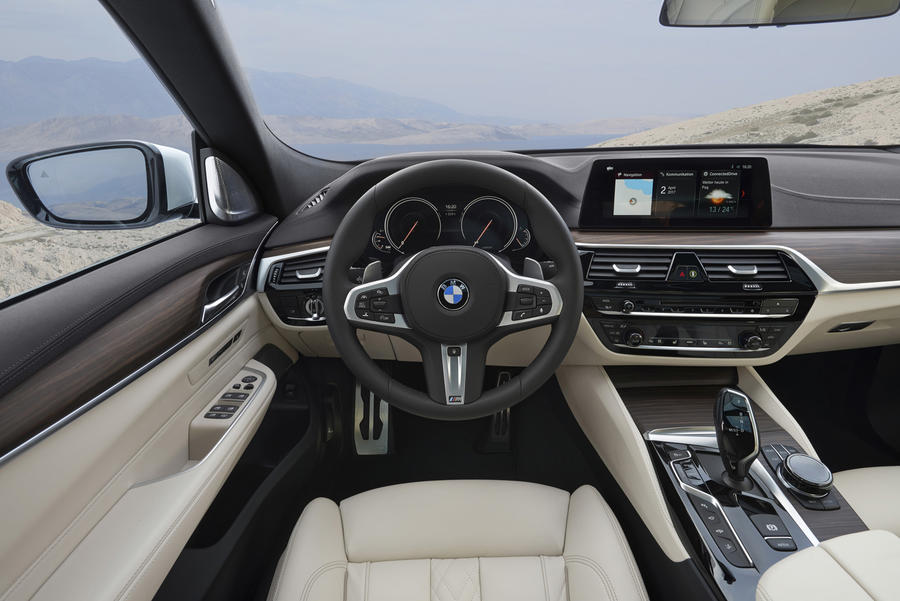 This is a car that offers quite a specific set of advantages, as its predecessor did. It’s exceptionally roomy, versatile and qualifies as a genuine GT in that it’s capable of consuming big mileages with potent serenity.

True, it’s hardly as elegant as a grand touring Aston Martin, but it’s easier on the eye than the 5 GT. It’s also well finished, very comfortable, secure and, with its slightly higher seating position, provides a little of the imperious feeling you enjoy when occupying an X5. The difference, this time, is that it drives more like a BMW should, or it certainly does with an assortment of the dynamic option boxes ticked.

The bulk of the 150,000 5 GTs sold over the past eight years went to back-seat-loving China and South Korea, where they’ll likely enjoy this version even more. In the UK, the 6 GT makes a slightly oddball choice, but those tempted by its not insubstantial assets face fewer styling and dynamic penalties. 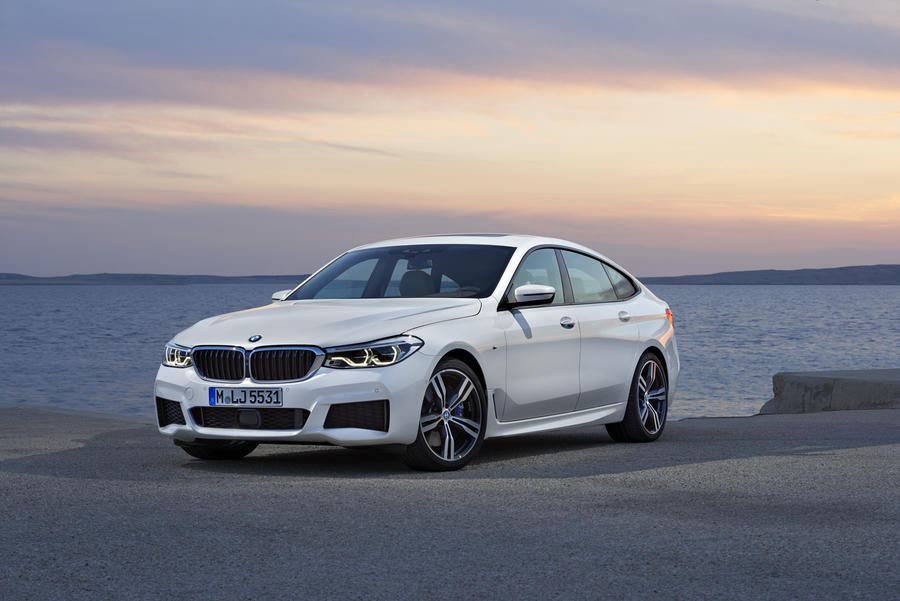 I can see the point of these GTs

For those who say they can't see the point of the GTs over a touring have obviously never sat in the back of one.

We looked at a 3GT before getting our touring. The fit and especially size of the GT was noticably better than the touring. The main reason for getting a touring was a dealer having a car in almost-perfect spec stock and eager to do a deal.

The 5GT never did it for me however I'd consider this one over a 5 touring next time.

I'm not sure BMW build quality is that great - my two recent ones have had more issues than a Lotus I recently ran and the new one has had more problems in 6 months than my Subaru had in 13 years. However, we live 200m from a dealer. I'm not sure I'd run one outside warrenty. The same goes though for all the German brands. Unfortunately the Japanese don't make powerful, petrol, AWD estate cars

Not sure why they made this instead of a 6 series shooting brake because the current model would look sublime in that form.

Clearly missed the point there didn’t you.