From £35,8359
The latest BMW 5 Series is arguably the most complete executive car out there, as long as you spec it correctly
Open gallery
Close

Don’t worry, we haven’t gone blind. While the side gills, imposing front grille and conservative profile might scream 7 Series, this is in fact the latest 5 Series. We have already published a couple of drives covering six-cylinder petrol and diesel variants, but it’s the linchpin of the range we’re covering here - the 520d.

A quick flick through the spec sheet reveals that while the 5 Series might sit on an all-new platform, its 2.0-litre diesel engine is the same 1995cc lump that sits in everything from the Mini Cooper D upwards. In the 520d, it produces 188bhp - enough for brisk performance - and is mated as standard to an eight-speed ZF automatic gearbox.

More interestingly, there’s the option of four-wheel steering (dubbed Integral Active Steering, costing £995) to improve manoeuvrability at low speeds, and stability as the pace ramps up. It’s also possible to have all four wheels driving should you want the added traction of BMW's xDrive system, at the cost of £2000. 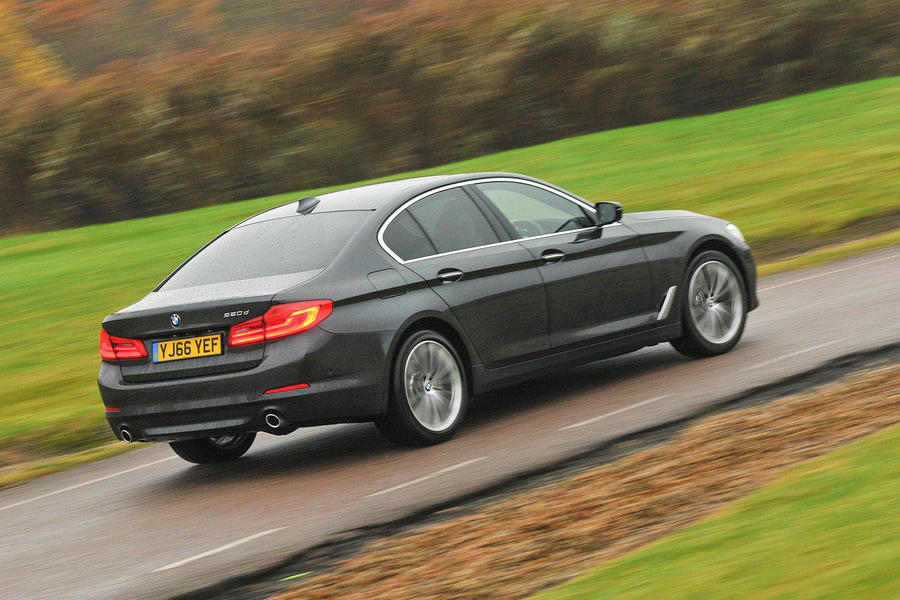 Explaining how the 5 Series copes with UK roads is a little trickier than you might expect. Opt for an M Sport car on 19in wheels and non-adaptive suspension, and you might be more than a little disappointed, because it'll pick up on most of the surface imperfections you'll find on a typically tortured stretch of British blacktop.

The trick is to avoid the temptation of speccing wheelarch-filling rims, and stick to 17in or at most 18in wheels. Combine the thicker sidewalls these bring with the optional £985 adaptive dampers, and you suddenly have a car that all but floats down the road when left in Comfort mode.

Where the 5 Series really impresses is in its ability to combine this fantastically comfortable ride with good body control. Drive a Mercedes-Benz E-Class and you’ll notice plenty of wallow and roll instead of the upright stance and tight damping of the BMW.

That’s not to say it’s perfect; a Jaguar XF responds even more keenly, and filters far more feel up from the front tyres. In comparison, the 5 Series has slower and less feelsome steering, although it does make for more relaxed progress when you’re not going for it, and it's precise enough to allow you to place the nose of the car very accurately. BMW being BMW has also delivered 50/50 weight distribution, leading to well-balanced handling.

As for the engine, it may not be the newest unit out there, but it’s certainly effective. Performance is strong enough for full-throttle to rarely be required and BMW’s mastery of the eight-speed ZF auto 'box continues. Shifts are smooth when they should be and swift when you start playing with the manual mode.

Refinement is impressive, too; it isn’t quite as hushed and vibration-free as the equivalent Audi A6, but it manages to be quieter than the E-Class and XF during normal use. Yes, it gets a bit coarser when you’re pushing on, but what four-cylinder diesel engine doesn’t? 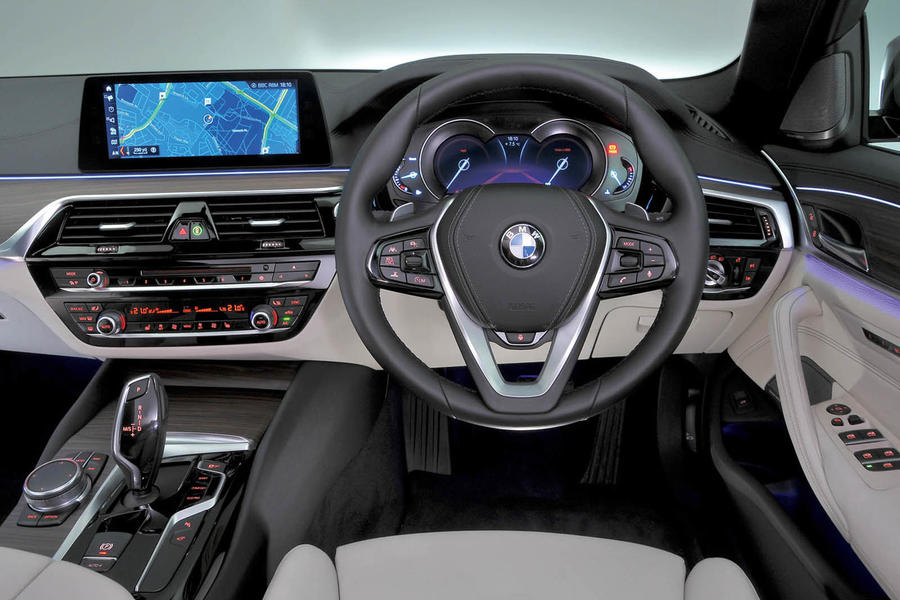 Inside, things don’t look too different at first glance. The layout is familiar enough, but there have been plenty of detail changes including the raising of the infotainment screen, addition of a fully digital instrument display and a wholesale lift in material quality.

It’s that good that it’s time for a cliché alert: it really does feel like a miniature 7 Series. You’ll be looking a very long time before you see anything approaching a hard surface, the switchgear feels delightfully precise and all the key touch points feel top-notch. This is how executive interiors should be done.

It’s a shame then, that rear seat space isn’t quite as generous as in some rivals. It’s not that it’s pokey, but an E-Class or Volvo S90 would have a good lot more leg room. If you’re likely to carry particularly tall rear passengers, it’s something that's worth considering.

If you’re after the best-handling executive saloon out there, then the 5 Series probably isn’t for you. Yes, it’s exceedingly good, but a Jaguar XF is a bit more involving and agile.

If we’re honest, though, most cars of this type won’t be spending much of their time on motoring nirvana roads. If anything, it’ll be the exact opposite - the hellish reality of our crowded motorway network. Here, the 5 Series really appeals in its ability to play the cosseting luxury barge to a tee, while also providing enough engagement to keep a keen driver entertained on their favourite stretch of Tarmac. Factor in the top-quality interior, and this is the most-rounded executive saloon currently on sale.

why when you test a BMW you invariably test a Deisel, why never a Petrol one for instance?

both XF and 5 series I could

both XF and 5 series I could argue are smart looking cars, but would I call the 5 series smarter looking than an XF?...I think no but its subjective and down to personal tastes. the BMW is smart in it's typical germanic way, as is the mercs and audi's so to me that's just how germans design cars and it has its appeal. you either buy the car based on emissions, dynamics, looks, badge appeal/loyalty or functionality. The germans have the powertrain issue sorted and are ahead of the game, apart from the diesel gate scandal and i feel that JLR still have some catching up to do. however, they both suffer from the same disease that all do and its the copy and paste job. bit like getting the same suit onto someone else and just re-adjust the stitching. its becoming laughingly boring and I can understand why people want to buy old cars
odie_the_dog 14 February 2017

Not in my experience.

Not in my experience. The twats still seem to be piloting 3 series, 5 series, X3 or X5s. Tailgating, not using indicators, behaving like they own the road. I can only assume BMW offer a free lobotomy with each car because surely people don't develop that way naturally?
View all comments (30)