BACK TO ALL NEWS
Currently reading: BMW 6 Series GT makes its debut at Frankfurt motor show
UP NEXT
Lotus Emira vs Porsche 718 Cayman

BMW's new 6 Series Gran Turismo has made its public debut at the Frankfurt motor show.

The new 6 GT is destined to go on UK sale in November and will form part of a four-model line-up for the 6 Series. The GT range will start off with the £46,810 rear-wheel drive 630i Gran Turismo SE rising to the £57,570 four-wheel drive 640i xDrive Gran Turismo M Sport.

The adoption of the BMW 6 Series name for a replacement for the 5 GT is in line with the German car maker’s efforts to place greater emphasis on luxury at the upper end of its line-up. Autocar understands that the existing 6 Series coupé, cabriolet and Gran Coupé will be phased out within the next two years in a move that will leave the new 6 Series Gran Turismo as the sole 6 Series model. Today’s 6 Series coupé and cabriolet will be indirectly replaced by the 8 Series coupé and cabriolet due in 2018 and 2019 respectively. 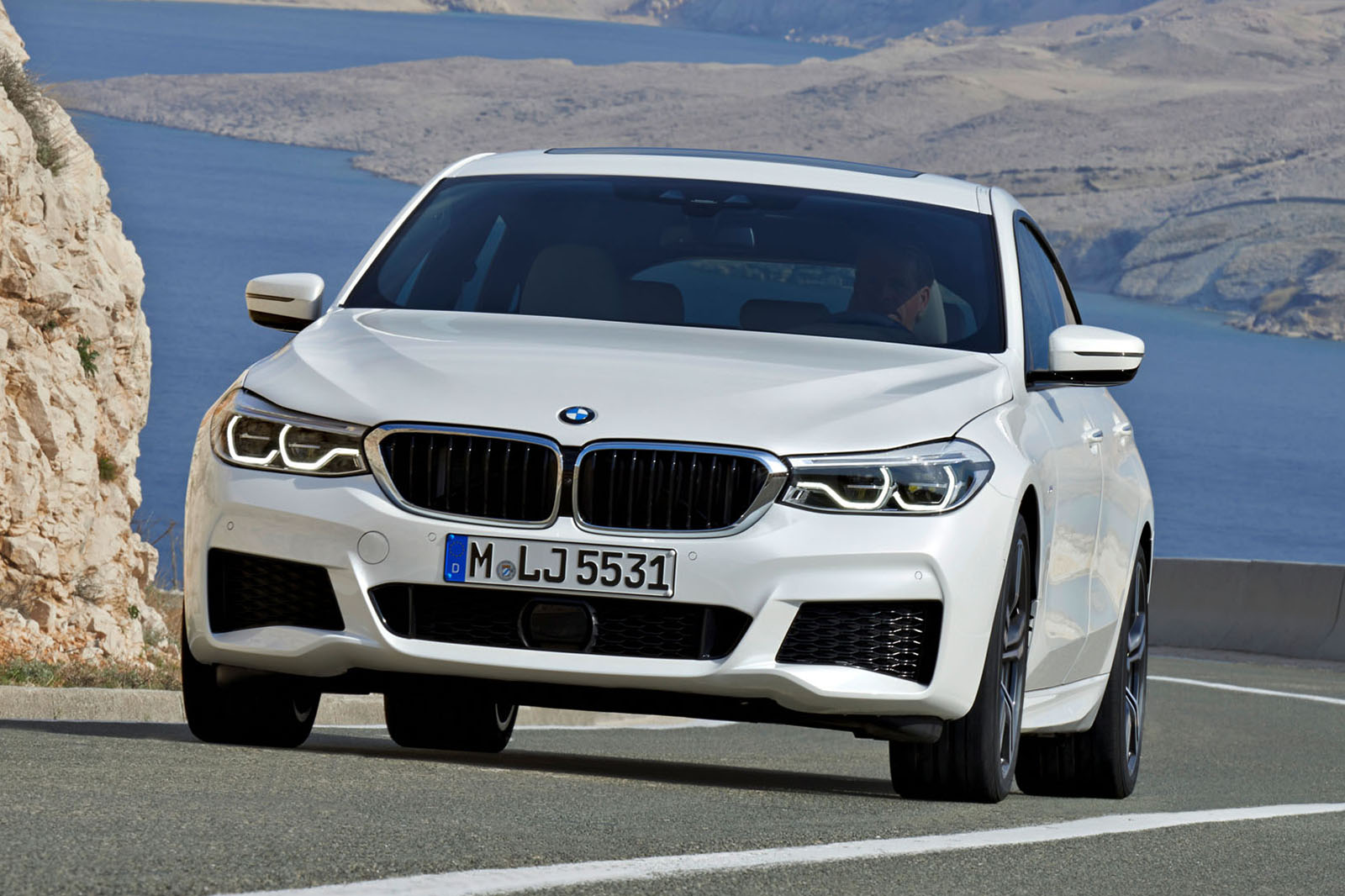 The new 6 Series Gran Turismo draws heavily on the latest 5 and 7 Series, and will be produced alongside them at BMW’s Dingolfing plant in Germany. It is built on BMW’s latest CLAR (Cluster Architecture platform), which helps to endow it with weight savings of up to 150kg over equivalent 5 Series GT derivatives through the use of a greater degree of aluminium and hot-formed, high-strength steel within its body structure.

The standard suspension has rear air springs and automatic self-levelling but, as with the 5 Series and 7 Series, buyers can specify a more advanced air suspension featuring air springs at the front and rear, together with variable damping control and active roll control.

The 6 Series Gran Turismo also offers a combination of optional four-wheel drive and active rear steering on variants at the top of the model range.

The 6 Series GT rides on the same 3070mm wheelbase as the 5 GT and is the same width, but is 21mm lower and 87mm longer. The new model keeps its predecessor’s frameless doors and its large, liftback tailgate but the boot is 110 litres bigger than the 5 GT’s, at 610 litres with the 40:20:40 split rear seat up or 1800 litres with it completely folded down. 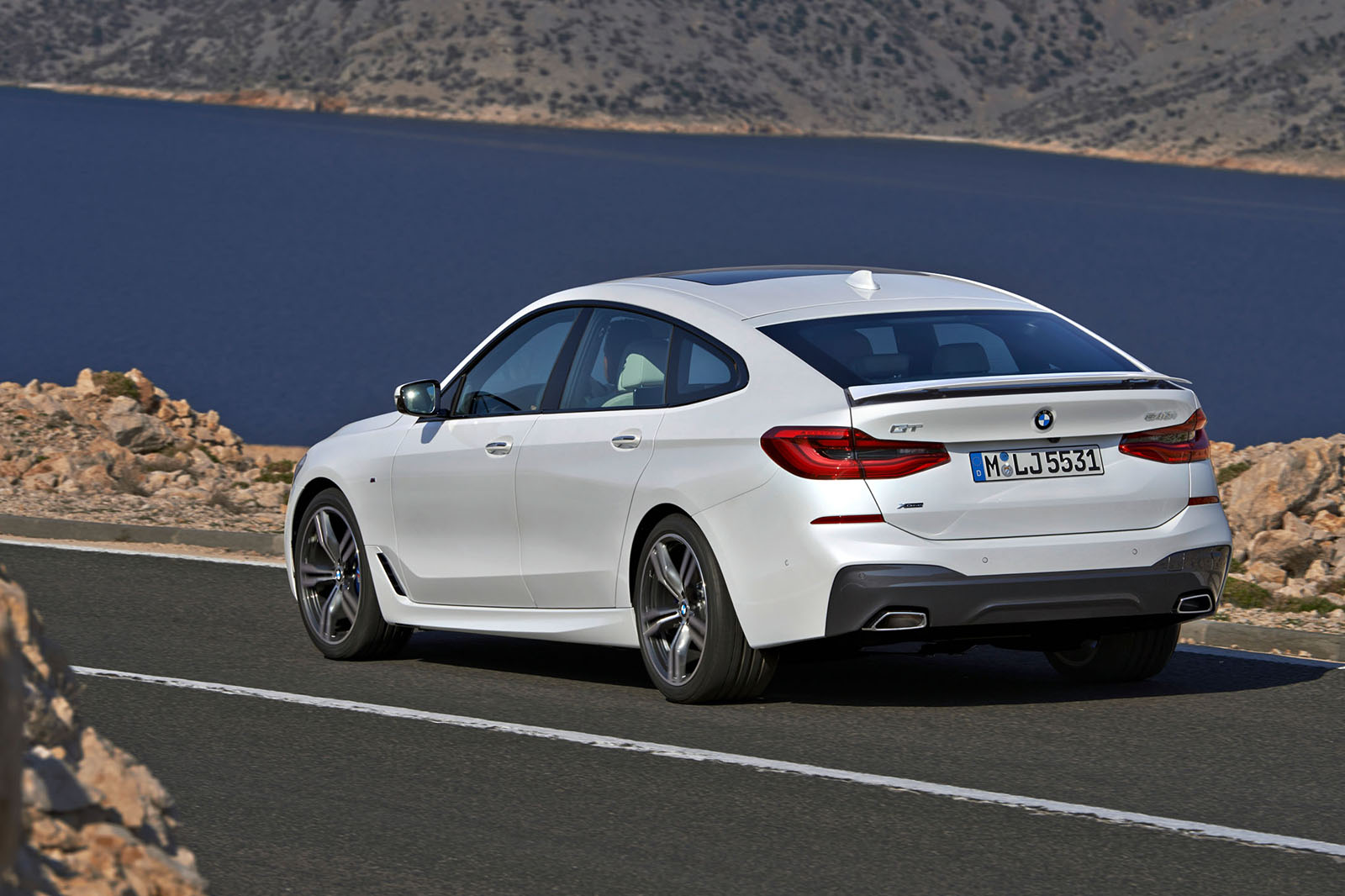 In the UK, buyers will get the choice between the standard SE model and a more aggressively styled M Sport package with beefed up bumpers, more prominent sills and larger wheels and tyres.

The line-up of petrol and diesel engines will be available only with an eight-speed automatic gearbox and the option of four-wheel drive on models with six-cylinder units.

Among the petrol units in the launch line-up is a 2.0-litre four-cylinder turbo developing 258bhp and 295lb ft in the rear-wheel-drive 630i Gran Turismo. It is claimed to hit 62mph from a standstill in 6.3sec and has a limited 155mph top speed. Claimed fuel economy on the combined cycle is 45.6mpg and CO2 emissions are put at 142g/km.

The 640i Gran Turismo receives the latest evolution of BMW’s turbocharged 3.0-litre in-line six-cylinder petrol engine with 340bhp and 332lb ft, sufficient to provide the four-wheel-drive 6 Series xDrive GT with a 0-62mph time 5.3sec, a limited 155mph top speed along with combined fuel consumption of 36.7mpg and CO2 emissions of 177g/km.

The sole diesel at launch is a turbocharged 3.0-litre inline six that develops 265bhp and 457lb ft in the 630d Gran Turismo. In standard rear-wheel drive guise, it possesses a 0-62mph time of 6.1sec and limited 155mph top speed together with official consumption of 57.7mpg and CO2 emissions of 129g/km.

And the front page of the magazine was obviously hacked: someone got in and wrote "a looker at last" just for a laugh! Or that caption was meant for the Alfa above. Come on, get real!
tomy90 14 June 2017

I do not like the look of this, but will be a fantastic second hand buy like all previous 6 series BMWs. Just a shame it's not the greatest looking BMW (but not the worse)
JCarter 14 June 2017

What would people say if JLR made this!

Sure it's great to drive and sit in but the looks are no better than previous version which ends up a bargain second hand.