BACK TO ALL TOP 10s
Currently reading: Top 10 best mid-size executive cars 2021
UP NEXT
Off-road cars

This class of car needs to be comfortable, refined and display some form of driving pleasure when the occasion takes, so which cars make our top ten?
Share
Open gallery
Close
Share story

The mid-size executive class champions quality, economy, comfort and space, although cars with a dash of performance and handling dynamism as well inevitably stand out in within it.

These are the cars that will spend a great deal of their lives out on the motorway, so refinement is key. The office car park status conferred by the right premium badge doesn't go amiss here, either. These are our favourites.

BMW’s latest 5 Series is in many ways the quintessential and defining mid-sized executive saloon, which is no doubt a result of its 46-year history.

Recently face-lifted, it sets a high standard in the segment as far as perceived cabin quality is concerned; it makes a very comfortable long-distance tourer in pretty much any engine and trim you might choose; its best engines also offer first-rate performance and drivability, and very creditably real-world efficiency too; and its rear-driven handling poise makes for plenty of sporting appeal when you go looking for it, without compromising on ride comfort. A 545e plug-in hybrid would make a fine fleet option, while either a 530d or 540i would reward you for opting out of the company car scheme, albeit it for different reasons.

It may not be quite as engaging to drive as a Jaguar XF but this may be forgiven when you consider where cars of this type spend most of their time. The BMW's tech on board is a notch above most rivals also, particularly for the impressive configurability of the car's driver assistance systems.

The distinguishing completeness of the 5 Series earns it top honours here.

Save money with new BMW 5 Series deals from What Car? 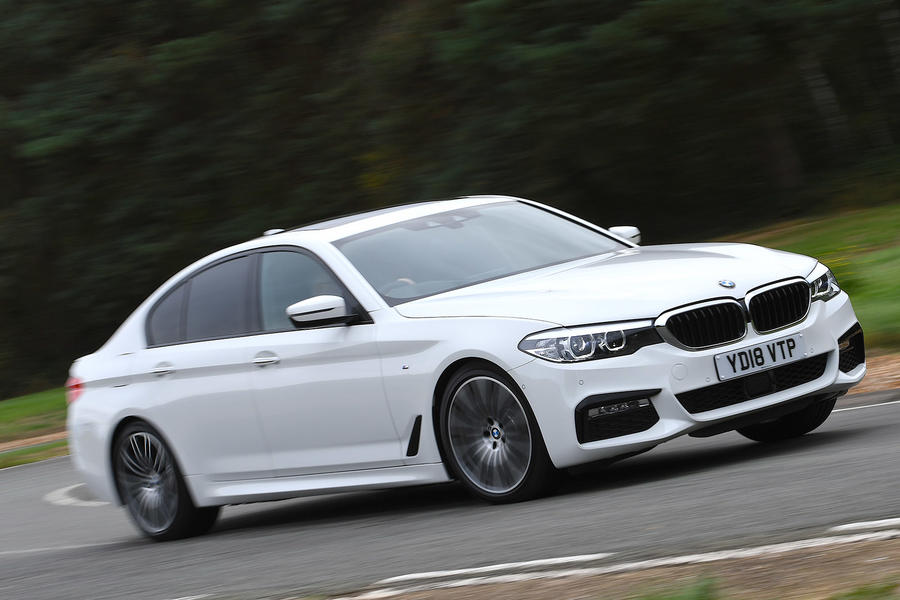 The Mercedes-Benz E-Class is the sort of executive option that priorities driver comfort, onboard luxury, occupant safety and all-round ease-of-use over outright driver engagement. The cabin – updated for 2020 – is a luxurious place to sit and, combined with the car's excellent active driver assistance systems, would go a long way to make long-distance commuting pleasurable.

Mercedes offers abundant choice on propulsion, with electrification now playing a leading role, and the entry-level PHEV derivative offering 154bhp in petrol form and 158bhp for the diesel. At mid-level, the E300e is petrol-electric while the E300de is diesel-electric, with both cars being quite evenly matched for price and performance (although, predictably, the diesel delivering better real-world long-distance fuel economy). And further up the range still, buyers can choose from a couple of straight-six diesels; there's also the six-cylinder turbocharged E450 warm petrol option; and only then do you get to the rarefied and expensive levels of the mild-hybrid AMG -53 and full-fat AMG -63 performance versions.

Whichever version you plump for, the E-Class' character is certainly more laid back than that of an equivalent BMW 5 Series or Jaguar XF. It probably won’t be as thrilling or composed when driven quickly, but might soothe away miles more effectively.

Save money with new Mercedes E-Class deals from What Car? 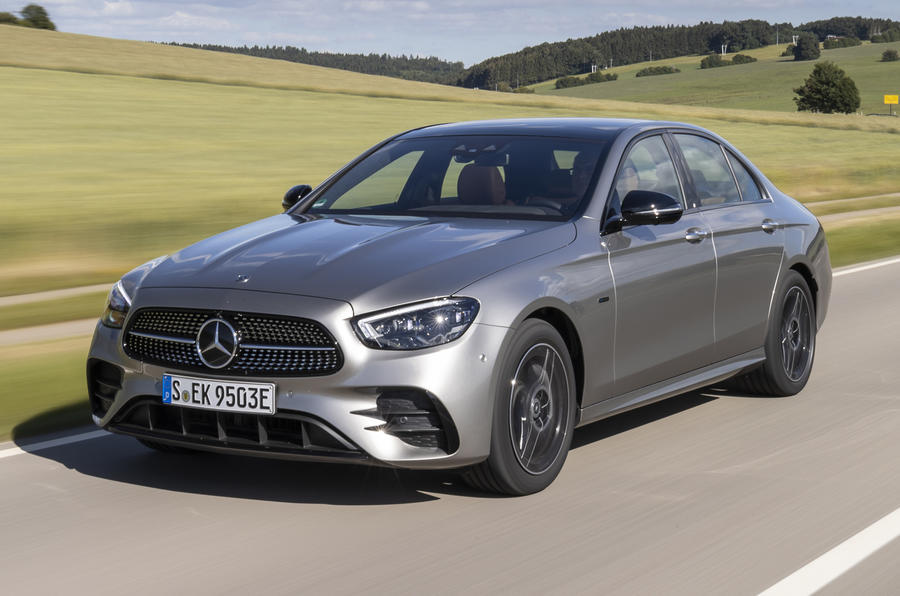 The very first mainstream electric luxury car is still among the best executive saloons of its size. It now boasts almost 400 miles of the range even on the stringent WLTP cycle, while the prospect of zero per cent benefit-in-kind tax might well mean it appears as a high-end fleet option for some.

The Model S is also, to use official terminology, ludicrously quick in a straight-line and can seat seven passengers – something no other cars on this list can manage. What prevents it from placing higher are questionable interior fit-and-finish, ordinary dynamics and the high asking price. Even so, only a good car could remain this appealing, both on paper and in daily use, at such a ripe old age.

Save money with Tesla Model S deals from What Car? 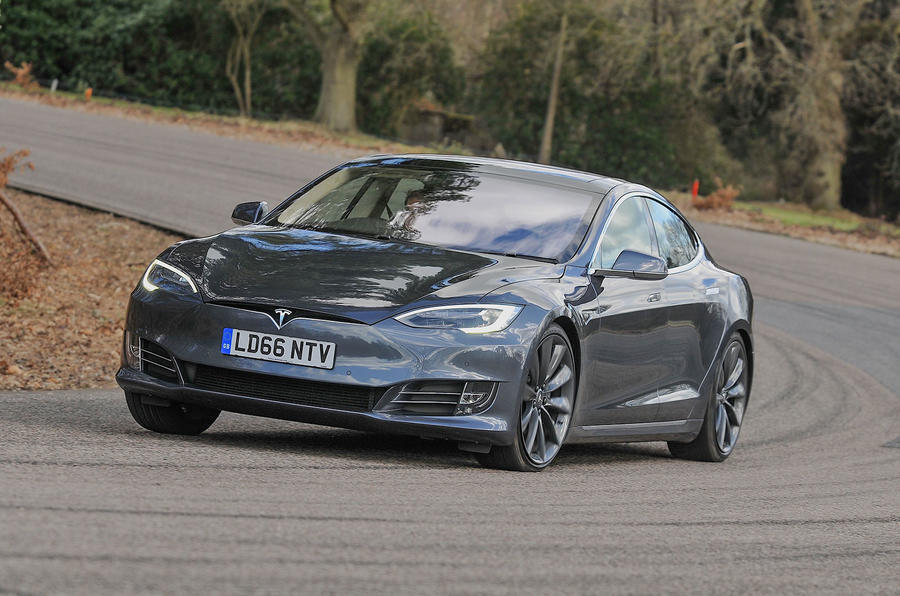 Jaguar’s XF remains the best driver’s car in the segment, combining deft handling characteristics with a supremely comfortable ride; sadly for Jaguar, that fact isn't enough to make this ageing Brit our class pick in quite the way that it used to be.

It is hamstrung mainly by a range of Ingenium four-cylinder engines; the diesels can be gruff on start-up, particularly in the cold, and none really delivers the performance, drivability or efficiency in real-world use that's needed to make the grade. In some ways, then, the XF isn’t as quick as Jaguar claims; and even at the richer end of the engine spectrum there is only one six-cylinder option on offer - JLR's still-creditable 296bhp 3.0-litre SDV6.

Cabin quality is strong and there’s a decent (although not class-leading) amount of space available for rear passengers, although onboard instrumentation and entertainment technology will need to improve before the car can contend for top honours again.

Save money with new Jaguar XF deals from What Car? 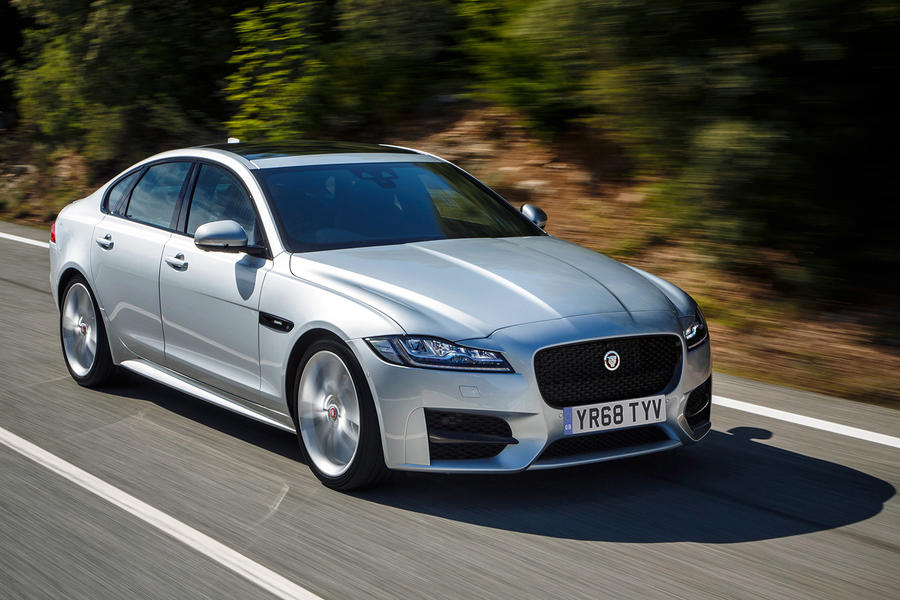 Handsome-looking thing, this A6 is isn’t it? While it might bear a remarkable resemblance to the larger A8 limousine and A7 Sportback, to many of our testers here at Autocar Towers the A6 represents the most successful execution of Ingolstadt’s new-age design language.

It’s a technological wonderland too. Audi’s latest dual-screen MMI digital architecture is a particular highlight within the monochrome-cool confines of the A6’s spacious cabin, while the Virtual Cockpit is as impressive as ever.

To drive it remains refined in the classic Audi sense; power comes from a range of silken-edged, mild-hybrid petrol and diesel motors which provide the A6 a respectable amount of shove even at the entry level. It rides well, too, and is impressively agile through the bends.

But unlike the BMW 5 Series of Jaguar XF, it fails to really engage as a driver’s car. To some, its church-like isolation, refinement and tech appeal will be a massive draw; it’s not quite enough to see it rise to the top here, but when we've driven Audi's new fleet-friendly plug-in hybrid version the '55 TFSIe' - as we're sure soon to do - expect the A6's standing in this list to improve.

Save money with new Audi A6 deals from What Car? 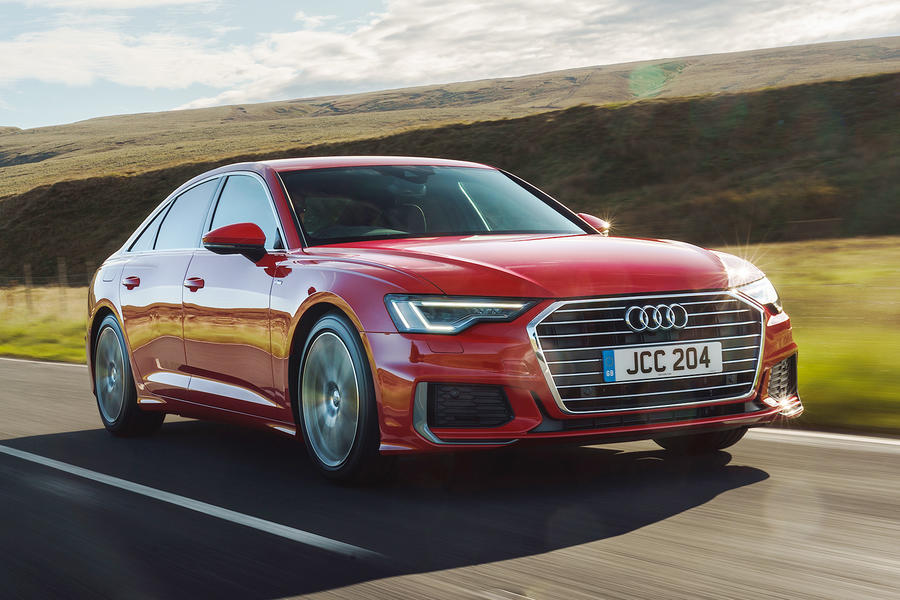 The Skoda Superb is big on many things: size, interior space, comfort and value for money.

In a class largely populated by upmarket rivals, the Superb undercuts the vast majority as far as initial outlay is concerned - although it clearly doesn’t boast the same levels of badge prestige and desirability.

Still, buyers will be drawn to the Superb’s comfortable and refined drive, as well as its cavernous interior. Real-world fuel economy isn’t quite as good as Skoda would have you believe, but running costs should certainly be low for those who plump for the new big-on-value Superb iV plug-in hybrid.

Save money with new Skoda Superb deals from What Car? 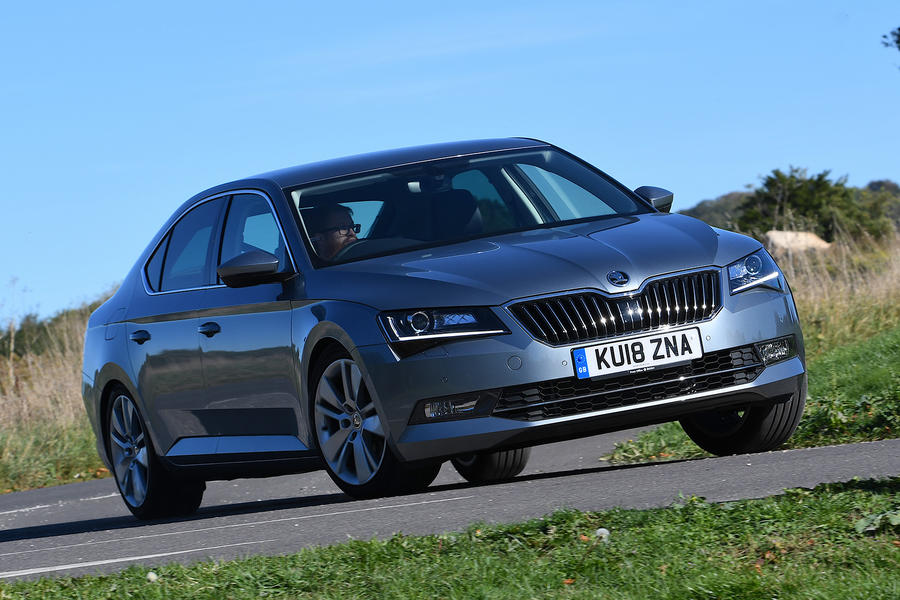 Sliding in at sixth place is the Volvo S90. Its striking design is shared with its V90 and XC90 rangemates, as is the strong focus on standard safety equipment - a big tick for family-minded buyers.

Similar to the Mercedes E-Class, the S90 has been geared more for comfort than driving thrills, meaning it comes in behind the likes of the BMW 5 Series and Jaguar XF, which excel on both fronts. It's also lately become a pricey option; what is now the only engine option - Volvo's near-400-horsepower plug-in hybrid T8 Recharge - means the car can't be had for less than £55,000 in the UK. WIth that engine, mind you, it shouldn't be anything but dull to drive.

Save money with new Volvo S90 deals from What Car? 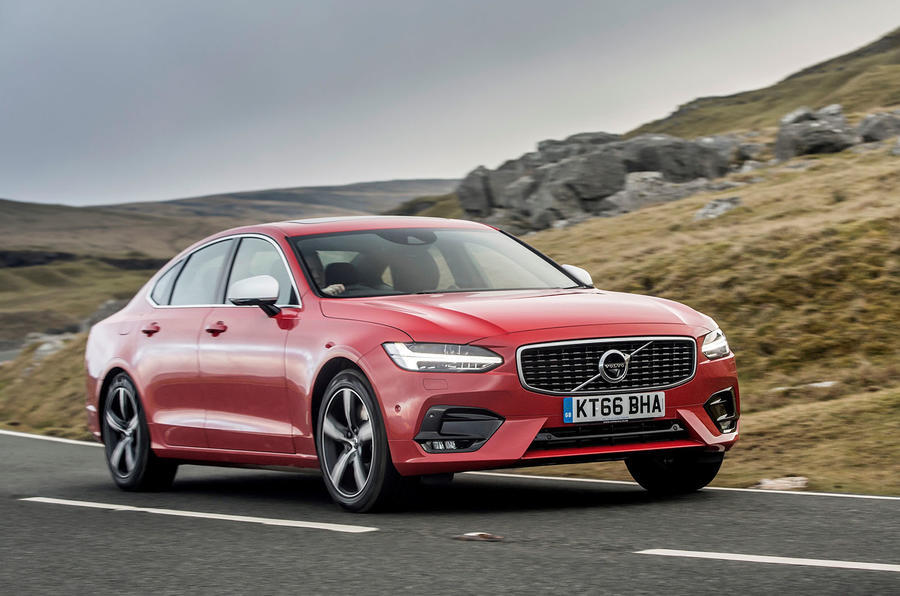 At more than £60,000 the Alpina D5 S isn't the cheapest mid-size saloon you can buy, and you can certainly get your hands on versions of the BMW 5-Series – upon which it's based – for much less money.

However, the people who question an Alpinas asking price are usually those who are yet to drive one, and that's very much the case here. The twin-turbo diesel D5 S will accelerate to 62mph in less than five seconds, so it's quick, but what separates these cars from the crowd is their ability to achieve 50mpg and true rolling opulence on the motorway one moment and, thanks to Alpina's chassis tweaks, plentiful driver satisfaction and dynamic finesse on B-roads the next.

Those in need of the ultimate non-M 5-Series should look to the petrol-powered V8 B5 BiTurbo, though the D5 S offers much of the same capability for considerably less outlay. It's an esoteric Bavarian gem.

Save money with new Alpina D5 S deals from What Car? 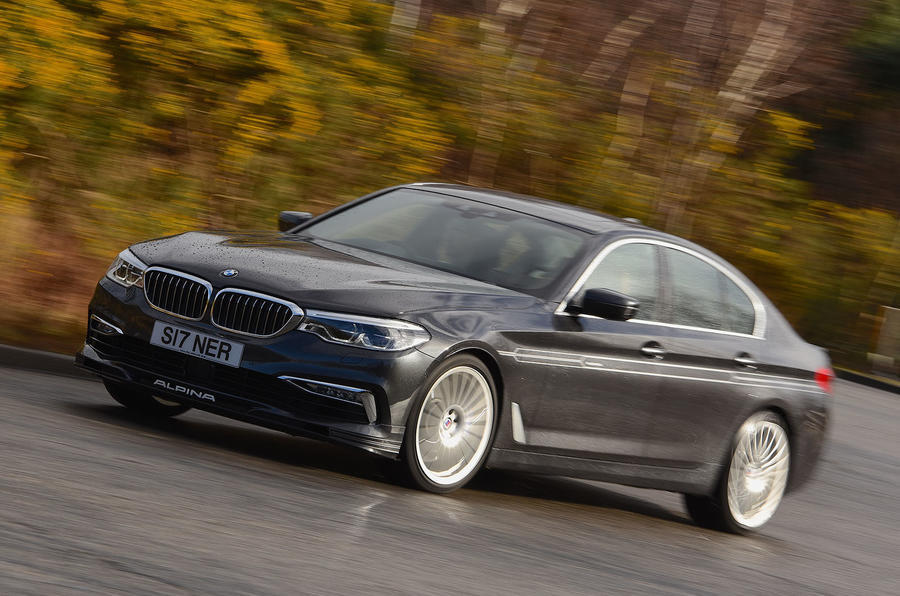 Gone is the old Lexus GS from UK shores. In a bid to boost its sales volume on the continent and here in Britain, Lexus has replaced its old rear-driven saloon with this more sensible ES - the firm’s best-selling four-door saloon in markets other than ours.

Lexus would likely argue that the ES’s biggest draw card is the fact that it’s only available as a hybrid here in the UK, coming in the form of the ES 300h. Its based on the same TNGA GA-K architecture as the latest Toyota RAV4, meaning there’s a 2.5-litre four-pot up front, which is supplemented by an electric motor for a combined output of 215bhp.

Around town is where the Lexus is most in its element. Here it’s hybrid powertrain is at its smoothest, while the ability to run for brief periods on electricity alone means it achieves decent fuel economy too.

Does it hold a candle to the likes of BMW, Audi and Mercedes in terms of outright desirability, though? Not really. While its comparably comfortable and impressively solid-feeling, its cabin lacks the usability of its German rivals, and its infotainment system is borderline infuriating to operate at times. Being front-driven, the car also lacks the natural rear-drive balance of the likes of the BMW 5 Series and Jaguar XF, and its powertrain doesn't respond keenly to being worked hard.

Save money with new Lexus ES deals from What Car? 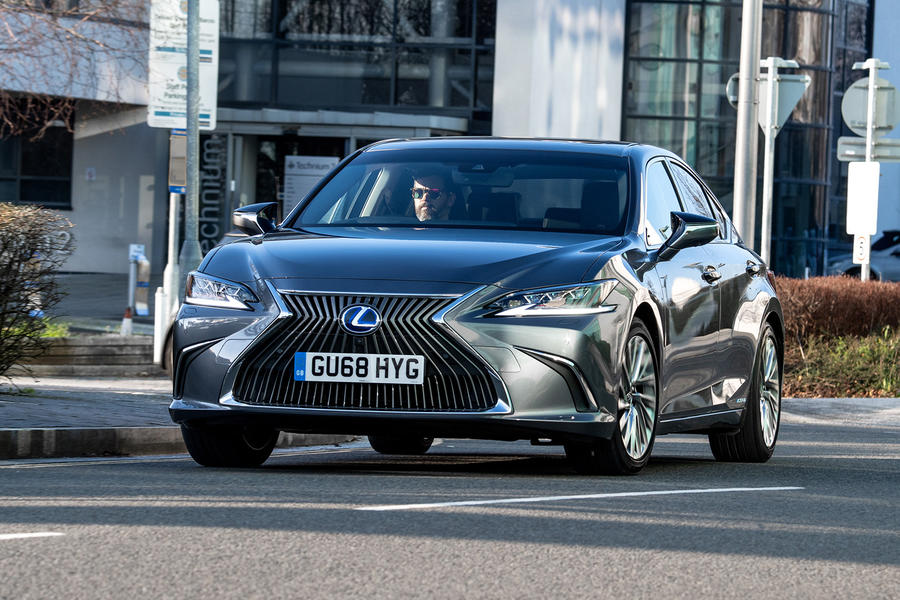 While the Ghibli may command the most badge prestige of all the cars included in this top 10, that extra appeal does come at a rather serious price.

Still, your money will get you a sumptuous, if a little poorly finished, cabin, and the S model’s V6 is Ferrari-derived; which makes for a nice pub fact. Maserati also recently added the option of a mild-hybrid four-cylinder petrol, which is good for a combined 325bhp and touts CO2 emissions one quarter lower than those of the V6 diesel it replaces in the line-up. The flagship, however, is the upcoming 572bhp twin-turbo 3.8-litre V8 'Trofeo', which will crack 200mph. Quite something, that.

Despite these powertrain optinos, the Ghibli doesn’t offer as engaging a drive as its exotic name might suggest, and it does lag behind the established names in this segment as far as standard equipment, technological sophistication and systems usability is concerned. While the idea of owning this Maserati might appeal, then, the reality of using one everyday might just disappoint.

Save money with new Maserati Ghibli deals from What Car? 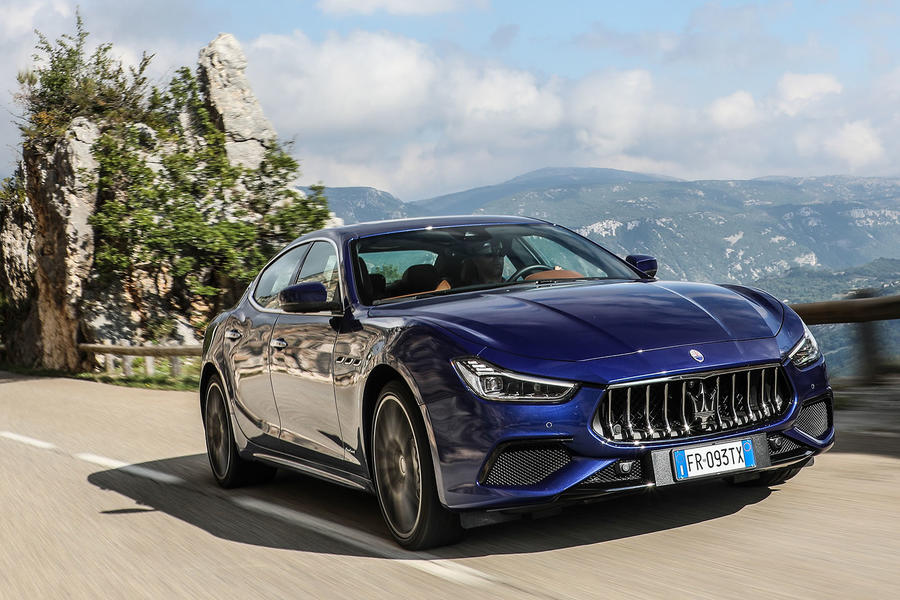