From £22,0608
BMW has stepped out of its comfort zone to make a back-to-basics front-driven hot hatch. Need Renault and Volkswagen be worried?
Open gallery
Close

Two years ago, BMW axed arguably its most distinctive product. That product was the second-generation 1 Series: the only family hatchback that could be described as truly rear-wheel drive and, as if that wasn’t enough, the only one available with six-cylinder power. Its existence meant that if you shelled out for one of the top-ranking 1 Series models, you were getting something undeniably special for your money.

BMW’s subsequent decision to switch the 1 Series onto the front-driven FAAR platform already serving the BMW X1 SUV duly went down about as well as Porsche’s 2013 clanger of withholding a manual gearbox from the Porsche 911 GT3. In both cases, the business case was there but approval from enthusiasts was certainly not.

Yet unlike the GT3, whose maker backtracked and now offers its finest driving machine with three pedals once again, the six-cylinder 1 Series isn’t coming back. Four cylinders sitting transversely, and sending their efforts to the front axle, is how it’s going to be.

But before we get too wistful, we need to be straight with ourselves: the old M135i and M140i cars with the creamy 3.0-litre straight six weren’t perfect. So much weight in the nose made them considerably less agile than many of their serious hot hatch rivals and an underdamped rear axle meant that the contact patches could feel worryingly vague on trickier roads. In truth, they weren’t really hot hatches at all. They were hatchback grand tourers: unique and, in the right circumstances, brilliant but costly to run and not the quick-footed firecrackers needed to challenge the established hot hatch benchmarks.

Which, interestingly, is exactly what the new 128ti is designed to do. Until very recently, the idea that the pre-eminent purveyor of rear-drive saloons might directly challenge the Volkswagen Golf GTI in its own backyard would have sounded absurd. But that’s what the new 1 Series architecture permits, and BMW seems to have put plenty of effort into making sure this car lands with a bang.

It has even reprised its second most alluring moniker – ti, for Turismo Internazionale – for the first time since the 1990s. Less welcome is the decision to celebrate this revival with jarring red exterior accents, but if those turn out to be the only blots on the 128ti’s copybook, game on.

Behind the redesigned bumper sits a detuned version of the same twinscroll-turbocharged four-cylinder engine found in the M135i xDrive range-topper. Here it makes 261bhp and 295lb ft instead of 302bhp and 332lb ft. Drive is then put to the front wheels through the same mechanical Torsen limited-slip differential found in the M135i, although the locking ratio has been reduced fractionally.

Without the stability provided by the more powerful car’s driven rear axle, BMW claims there was a risk the 128ti would be too fighty had the ratio remained unchanged. And that would have gone against what BMW is aiming for here: something coherent, deft and fun but not necessarily white-knuckle wild.

The detail changes therefore run much deeper than chucking the rear driveshafts and tweaking the differential. Compared with the M135i, underbody bracing has been removed from the front and added at the back, with the aim of shifting the distribution of stiffness rearward and making the front understeer less easily and the back more mobile. For the same reason, as well as to improve turn-in response, the suspension geometry has been altered, notably with the reduction of toe-in at all four corners.

In order to maintain that all-important dynamic harmony, the speed of the electromechanical steering has then been marginally slowed from what you experience in the M135i. Again, the aim was for pin-sharp handling, but with no unpleasant surprises.

Helping the 128ti’s cause is the fact that it weighs 80kg less than the M135i, so in terms of power-to-weight, it trails its range-mate by only 17bhp per tonne. It also comfortably beats the 242bhp Golf GTI by this measure, although neither is anywhere near the head of the field.

The BMW’s 181bhp per tonne is monstered by the 229bhp per tonne of the 65kg-lighter, 316bhp Honda Civic Type R. If you want to bring four-wheel-drive rivals into play, the 302bhp Mercedes-AMG A35 is the closest thing to the 128ti in spirit and customer profile, and it manages not much more, with 194bhp per tonne.

These are fairly dry figures, admittedly, but revealing ones for hot hatches, and the new BMW does adequately well. 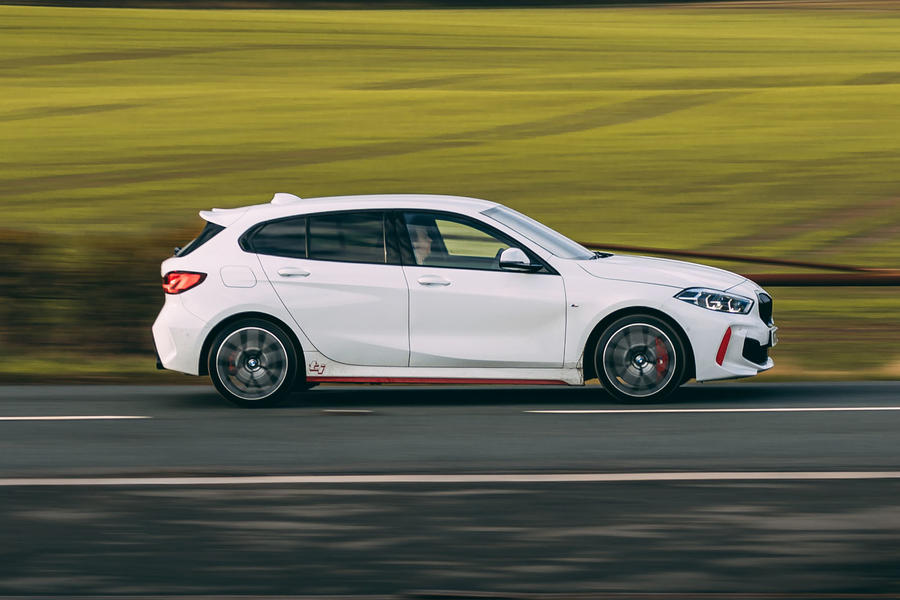 Now for some less encouraging news. Slide aboard the 128ti and, fair enough, you will be pleasantly surprised by the interior. The seats might look vaguely 1980s-inspired, but they’re among the best in the class for comfort versus support. In terms of ergonomics and perceived quality, this is also among the finest hot hatch cockpits around.

BMW’s iDrive retains plenty of solid-feeling physical controls, and elements such as the leather airbag cover, contemporary plastic finishes and red stitching leave several notable rivals feeling dreary. Even the Golf GTI feels one or two notches below the mark set by the 128ti, and – hallelujah – BMW has even supplied some deliciously simple digital instrument dials to replace the unclear sidewinders found on every other 1 Series. Pray it catches on.

However, you will also notice that there’s no traditional gearstick, and that’s because the 128ti is offered solely with an Aisin eight-speed torque-converter automatic gearbox. BMW claims the gearing for any manual would have had to have been overly long for emissions tests and that market research shows that uptake would be minimal. There’s probably truth in those statements, but the fact is that the 128ti purports to be a ‘proper’ hot hatch, yet you can’t have it with three pedals. And in light of that, you might be left wondering just how ‘proper’ it can be.

Well, in some respects, it’s very proper indeed; and in others, a little underwhelming. First, BMW has been brave with this car, nailing its colours to the mast in the form of the passive dampers. Should the chassis feel too soft on back roads, there’s no push-button rescue service to raise the level of control. Equally, if BMW’s set-up feels like skateboarding down cobbled streets when you’re on the motorway, that’s your lot.

Fortunately, an unusually fine balance has been struck. And while there’s some low-speed jostle that can sometimes feel only just the right side of punishing (please, stick to the 18in alloys), once you’ve got some speed up and begun to work the dampers, the 128ti flows with what could be called ‘forgiving poise’.

It’s almost exactly the blend of comfort and control that I want in a hot hatch: serious enough that the car immediately feels lean and toothy and capable enough to deal with Britain’s frequent crests and troughs without making your heart skip a beat, but also compliant enough to live with daily.

Overlaid on this is the revised steering, the gearing for which is measured without ever feeling ponderous. It’s a world away from the frenetic rack in the Renault Mégane RS, although still crisply responsive around the dead-ahead and, thereafter, more convincingly weighted than that of the Golf GTI. (It’s best left in Comfort mode; Sport is too artificially heavy.)

Its overall effect is to give the 128ti an enjoyable sense of dimension-shrinking precision, which is gratefully received in the era of hatchbacks almost as wide as an early Lamborghini Countach.

As for the engine, it’s more effective than engaging. The B48 2.0-litre is now well known, its undersquare design packing a uniformly powerful, if slightly laggy, punch that does plenty to push you forward from 2000rpm upwards but little to pull on your heartstrings. It’s well-matched to the gearbox, though, whose shifts are crisp and, in Sport mode, theatrically forceful.

So, steering, ride and powerplant: all are good or good enough. This leaves the stage set for that vaunted ti-unique handling to shine. Which it does, in parts, but not blindingly so. Damp patches on drying roads possibly don’t help, but the promised adjustability didn’t easily materialise.

There are hints this thing can play. Mid-corner, its nose responds acutely to the throttle closing, and it’s balanced enough that it will indulge being flicked through challenging direction changes at truly exciting speeds. But you might struggle to summon the commitment needed to really get the chassis going, which isn’t true for, say, the ever-exuberant Ford Focus ST. The 128ti majors on neutrality. It never feels especially keen to adopt any yaw on the way into corners, and while the differential is predictable, it isn’t as effective as you might expect on the way out.

Yes, there’s a fair amount of torque steer if you’re lead-footed, although more fundamentally, outright grip often feels limited. Depending on your expectations, it means that, when driven hard, the 128ti can frustrate as much as it can impress.

(PS – You might get more out of the LSD, both in terms of traction and precision, with a more serious tyre. BMW has elected to use Michelin's very capable Pilot Sport 4, but the truly superb 4S would elevate the package). 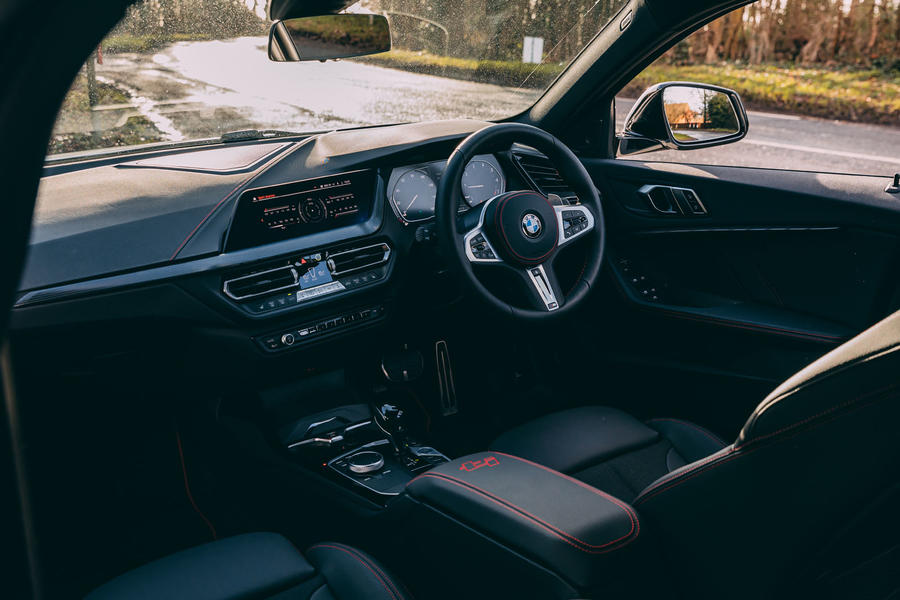 I certainly hope they do, because BMW’s first attempt at an authentic ‘sweet-spot’ hot hatch is mostly impressive and will deservedly steal sales from the Golf GTI, especially on the strength of its interior. There’s also something enjoyably gritty and pedigree-feeling in the dynamic character of the 128ti when you get it on the right bit of road.

However, I suspect that whatever the conditions, some will always be left feeling that this self-professed driver’s hot hatch shoud have turned out even more distinctive to drive, and should have offered an experience even more engaging, more of the time. Starting, maybe, with an extra pedal. 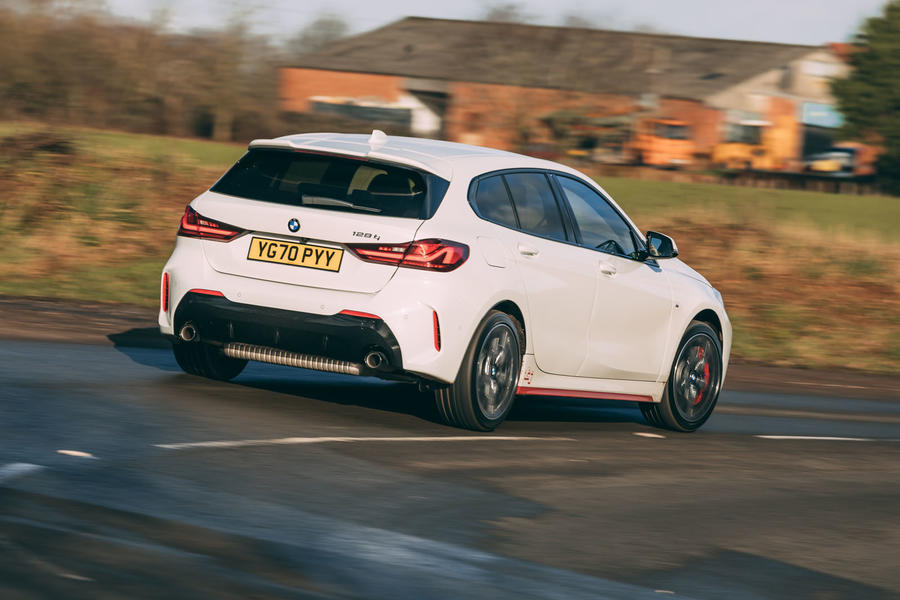 So the whole concept of this car was "let's take the m135i and make it a bit rubbisher". Got it.

Sundym 6 February 2021
Most reviews I've read says it drives better than the 135i , its not as flat footed , 4wd and more power doesn't always make a better car ...
Citytiger 5 February 2021

Now where have I seen those red accents before, ah yes on a Hyundai.. What a complete mess that thing is.

Now where have I seen those red accents before, ah yes on a Hyundai.. What a complete mess that thing is.

They are optional on the BMW, mess resolved.

Its an interesting bit of marketting here. This Ti is the only petrol engine between the 136bhp and the 304 bhp M version, so it would be the engine I would go for, but I dont want a hot hatch, just a more powerful 1 series, so I am glad that the tester thinks it is not hot hatch enough! Is this Ti a compriomise to please the majority? They should perhaps have 2 models of this engine, a comfort version and a more drivers focussed version. As it is they may perhaps have alienated both markets...