From £84,000
Dual-motor performance prototype puts on its RS badge, and already feels much more than a reworked Taycan
Open gallery
Close

The Audi RS E-tron GT raises a few interesting questions relating not only to the future of the performance car as a concept, but also to all cars in a far broader sense.

It’s no secret that the first electric vehicle to wear Audi Sport’s coveted RS badge shares in effect all of its componentry with the Porsche Taycan. From its twin electric motors to its three-chamber air suspension, and from its 800V battery to its layout and the J1 platform upon which it’s based – all of the things that make these cars stop and go and ride and change direction – are pretty much one and the same. So it’s tempting, if a little reductive, simply to label the RS E-tron GT as a Taycan in an Audi frock, purely by dint of the fact that the Porsche came first.

So the first of those questions, I guess, should be, ‘how much truth is there in such a label?’. And the big, rather more philosophical one has to be, ‘how different from one another can we expect the electric performance cars of the future to actually be?’.

We’ll come to the first in a bit, but that second one is a bit of a humdinger. Combustion-engined performance cars have taken many forms over the years, and everything from cylinder count to engine positioning, forced induction and transmission type all combine to determine how a car will ride, handle, perform and respond to your inputs. Crucially, however, they all help to form a car’s unique sense of personality.

There’s a degree more uniformity where the high-performance EV is concerned. Most will house their batteries beneath the floor, between the axles for a low centre of gravity and better weight distribution. Most will have an electric motor up front, joined by one or two motors at the rear for all-wheel drive. All will offer immediate throttle response and a slug of torque available from the basement and which enables them to accelerate with all the ferocity of a jump into hyperspace. Great for making the Kessel Run in less than 12 parsecs, perhaps, but it’s all a bit samey, isn’t it?

Just like the Taycan, the Audi fits that blueprint to a tee. Its 83.7kWh (net capacity) battery sits between the front and rear axles, each of which houses a permanent-magnet synchronous electric motor.

Combined, they endow the RS E-tron GT with system outputs of 612lb ft and 590bhp – that latter figure rising to 646bhp during launch control starts. Curiously, that’s not quite as much as the middleweight Taycan Turbo’s peak of 671bhp, but is still enough to make this EV the most powerful RS model yet and to allow it to accelerate from 0-62mph in ‘considerably less time than 3.5sec’.

So just how different from the Porsche is the Audi? According to Dennis Schmitz, technical project manager for RS E-tron GT, the clue is in the name. “We want to show high performance, but also everyday usability in an electric car,” he says. “That’s why we call it a gran turismo; to show it’s super-sporty on the one hand – RS always means extreme sport – but also that it’s really usable. It’s a four-door car, it’s a car you can travel longer distances in, you can travel with your family in, you can switch from a really comfortable setting to a really sporty one.” 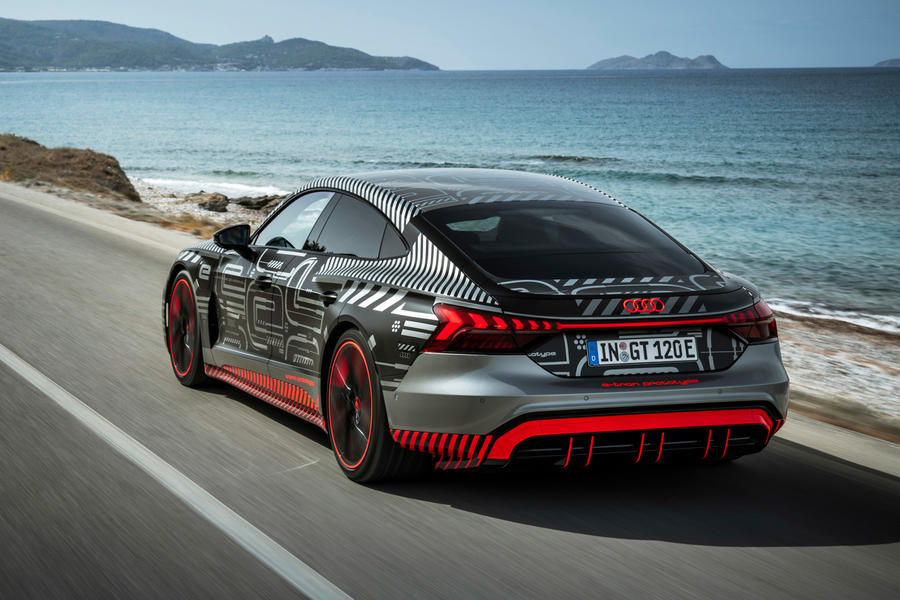 Having spent a couple of hours driving this camouflaged, preproduction (albeit very nearly finished) RS E-tron GT, I can see where he’s coming from in relation to its usability.

I never thought the Taycan Turbo S we road tested earlier this year was anything but impressive in terms of its ride and refinement, but there’s a softer, gentler side to the Audi’s ride that would probably make it the slightly more comfortable of the two over distance. Its cabin is also exceptionally well isolated, and the driving position is excellent. My only complaint in this respect is that I found the seatbacks to be a bit too wide for my frame – something you really notice when you get to a corner.

Because it’s here where you really notice the similarities between the two. Like the Porsche, the Audi tips the scales at around 2.3 tonnes, but you’d never know based on the way it changes direction. Like the Porsche, the E-tron GT’s steering rack is really quick in its responses, if a little lighter and more effortless in your hands, and its body movements are exceptionally well contained.

It corners really flatly, with masses of grip but not so much that it won’t nudge into gentle, easily throttle-controlled understeer if you come into a bend a bit too enthusiastically. Its rear-wheel steering is nicely calibrated, too, so you feel like you’re naturally pivoting into turns rather than suddenly rotating like a slapped shopping trolley. Then you get back on the throttle, and any thoughts you might have had about why Audi chose to cap the RS E-tron GT’s power output below that of it’s Taycan sibling evaporate.

On the road it’s seriously quick – easily as quick as you’d ever really want a car to be. Throttle response is instant, and the rate at which you accelerate verges on the uncomfortable. You don’t really need more thrust than the Audi serves up.

The Blade Runner-like soundtrack is pretty cool, too, in the sort of slightly geeky, technophile way that a Moog modular synthesiser is also pretty cool. But you’d never picture a rock star with anything other than an old Stratocaster, would you?

As necessary as EVs might be, the sonic character of an engine is an exceptionally challenging thing to replace. I’m not sure the RS E-tron GT – nor any EV for that matter – can produce a noise capable of making the hairs on the back of your neck stand up on end.

Nevertheless, I think the car is different enough from the Porsche to see it escape a ‘Taycan with an Audi badge’ label. The differences are subtle but detectable. It does feel like a more long-legged and comfortable car, if perhaps at the expense of some tactility and outright composure when you’re really going for it.

WLTP range hasn’t been confirmed yet, but Schmitz says it’ll be around the 249-mile point, and on the fastest 350kW rapid chargers (there are only a handful currently in the UK) you’ll be able to top the battery up to 80% charge in 22.5 minutes. As the infrastructure improves, I don’t see why you couldn’t use the Audi as a bonafide grand tourer. 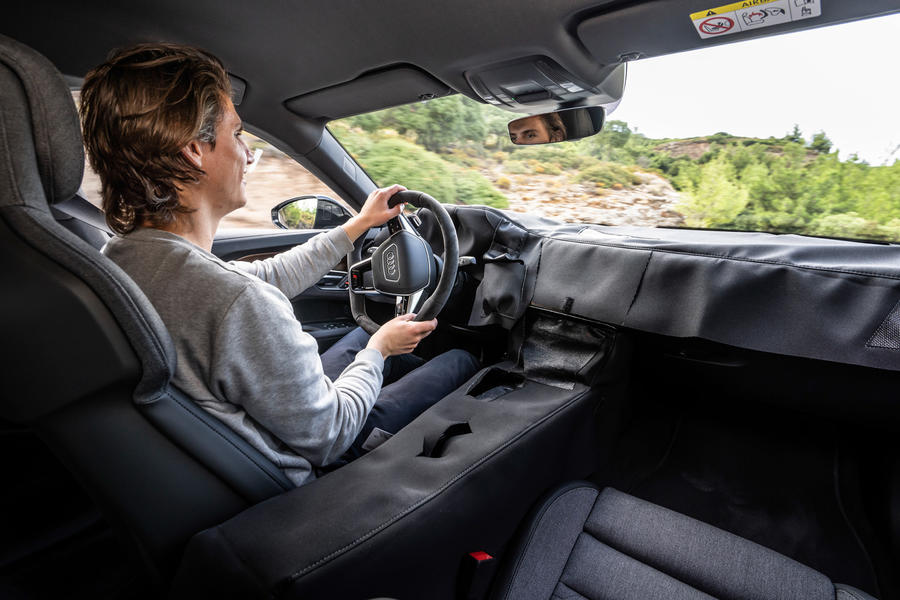 For all the subtle differences between the RS E-tron GT and the Taycan, their similarities are still manifest enough to make me apprehensive about the diversity of the electric performance cars of the future.

This pre-production Audi already feels like an impressively accomplished performance EV, and I’m really looking forward to seeing how the finished product performs when it arrives next spring. I just hope we’ll see some sort of deviation from a format that increasingly seems to prioritise massive acceleration as the primary measure of a performance EV’s worth. 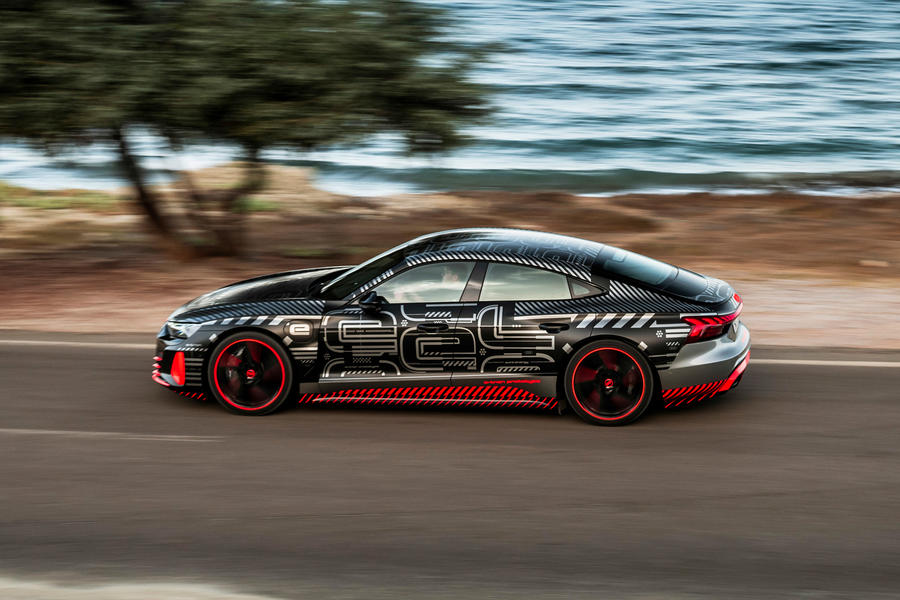 In spite of the GT name and

In spite of the GT name and description by Schmitz of it being a 4 door, it really is very similar in concept to the taycan which is also a four door saloon, just the porsche is a little bit more sporty in its ride and handling. So it is a Porsche in an Audi frock. Nothing really wrong with that really though.

As for RS GT, I am unsure if they work well together, isn't RS reserved for the hardcore performance variants as opposed to softer GTs?

EVs will kill the coupe :-(

My main concern is that EV architectures will kill the Coupé. Now I know they're becoming less popular anyway but remember that many (if not most) of the most beautiful cars ever made have been coupes. Same engine, shorten wheelbase, add style.

In theory a shortened version of this J1 platform could be the basis of the future 911, if you rightly assume there's no way porsche will hang heavy batteries behind the rear axle, but who'll want a 911 with a 140 mile real world range? No one.

My main concern is that EV architectures will kill the Coupé. Now I know they're becoming less popular anyway but remember that many (if not most) of the most beautiful cars ever made have been coupes. Same engine, shorten wheelbase, add style.

In theory a shortened version of this J1 platform could be the basis of the future 911, if you rightly assume there's no way porsche will hang heavy batteries behind the rear axle, but who'll want a 911 with a 140 mile real world range? No one.

Firstly, I think EVs will be short-lived in their current ineffecient output-to-weight format. Competition will rapidly evolve battery tech as ICE tech did before it, and we will have high output lightweight EVs in the future (think how turbo 4-cyls today outperform 1970's V12s).

Secondly, the 911 was a VW design mistake made beautiful. No one would design a car around such a layout again, as indeed no significant ICE competitor has.