BACK TO ALL NEWS
Currently reading: Buy them before we do: second-hand picks for 15 May
UP NEXT
BMW opens door to M1-inspired electric supercar

Buy them before we do: second-hand picks for 15 May

Gentle to the environment and also (within reason) your wallet - a BMW i8 coupe for £40,000? Yes please
Open gallery
Close

Going green and going fast is getting easier and cheaper for those hunting through the classifieds. With new electrified cars unveiled each month, the used market is swiftly becoming populated by them.

Today, perhaps the greatest green bargain of all is the BMW i8. Stunningly futuristic in design and execution, it unfortunately for BMW proved too flashy for eco-warriors, while petrolheads turned their noses up at a six-figure car with a three-cylinder petrol engine from a Mini. But be in no doubt that this plug-in hybrid is a hugely exciting sports car, offering brawny performance and serious long-distance GT comfort.

Sinking-ship depreciation means you can buy nearly new examples with a staggering £35,000 off their list price, but our pick comes at the bottom end of the used i8 price range. 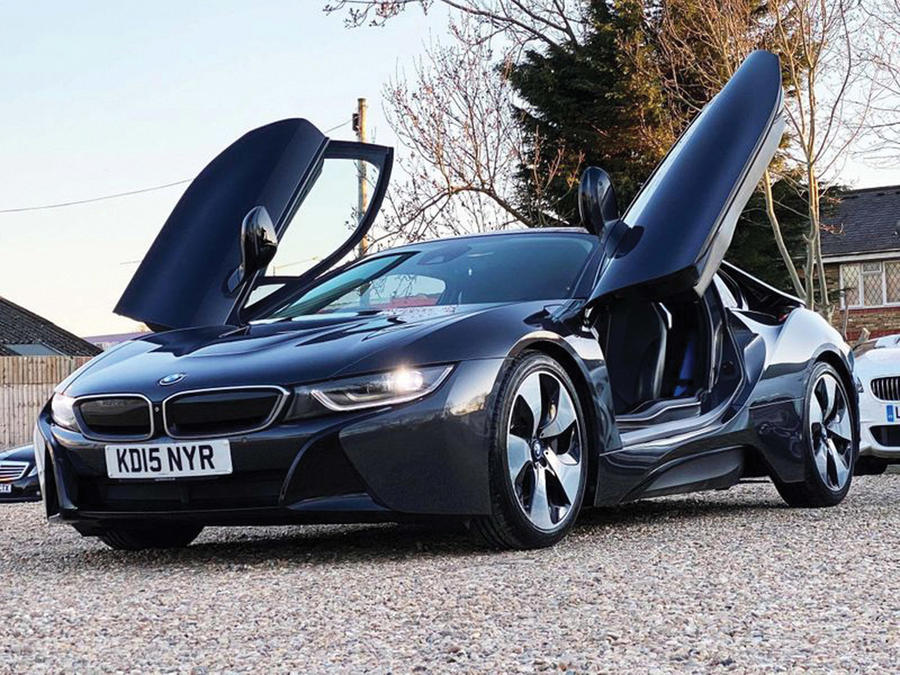 For £40,000, here’s a 2015-reg, one-previous-owner coupé with a full history. As it was registered before 1 April 2017, it won’t cost a penny in tax, and if you make use of its 16 or so miles of real-world electric range and keep it regularly charged, it will only cost as much as a hatchback to run.

The three-year manufacturer’s warranty may be long gone, but all i8 battery packs are covered for eight years or 100,000 miles from new, so there’s a reassuring amount of cover left on this one. There seem to be no obvious mechanical reliability issues with the i8, either. Parts such as the petrol engine and switchgear come from other tried-and-tested products, and the six-speed automatic gearbox appears to be robust. Just check the ostentatious butterfly doors (which require quite a bit of room to open) haven’t been whacked into anything.

It’s also worth assessing whether you can live with the i8’s poky boot, which makes a Porsche 911 look like a Skoda Superb Estate by comparison. 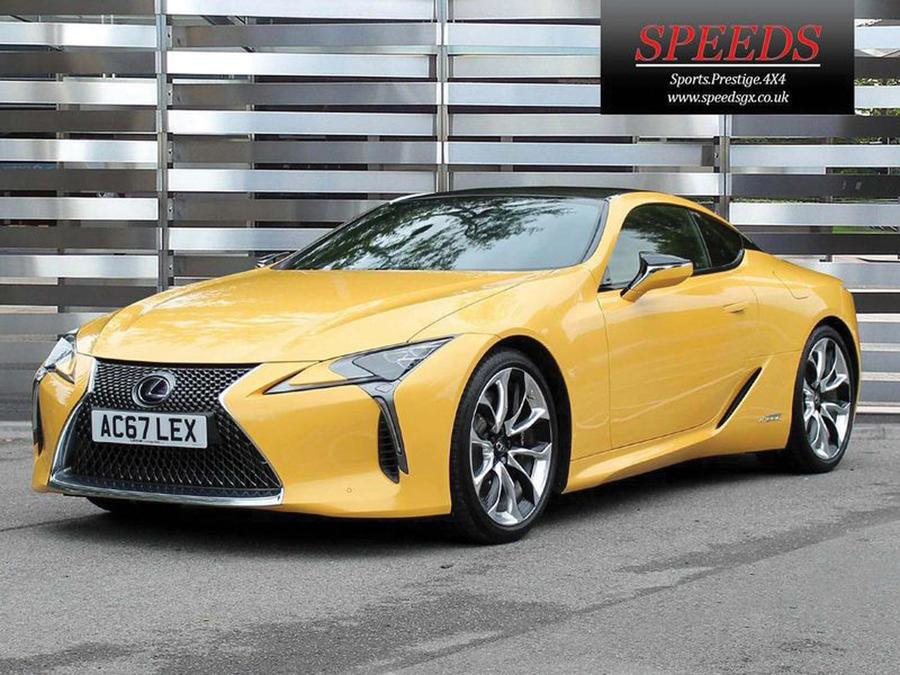 Lexus LC 500h Sport Plus, £50,950: It may not be the final word in driving dynamics and can’t drive as an EV, but Lexus’s huge swoopy coupé certainly turns heads. This 3.5-litre V6 hybrid from 2017 is hardly any slower than the regular V8 and much more frugal. Plus, there’s Lexus’s super reliability. 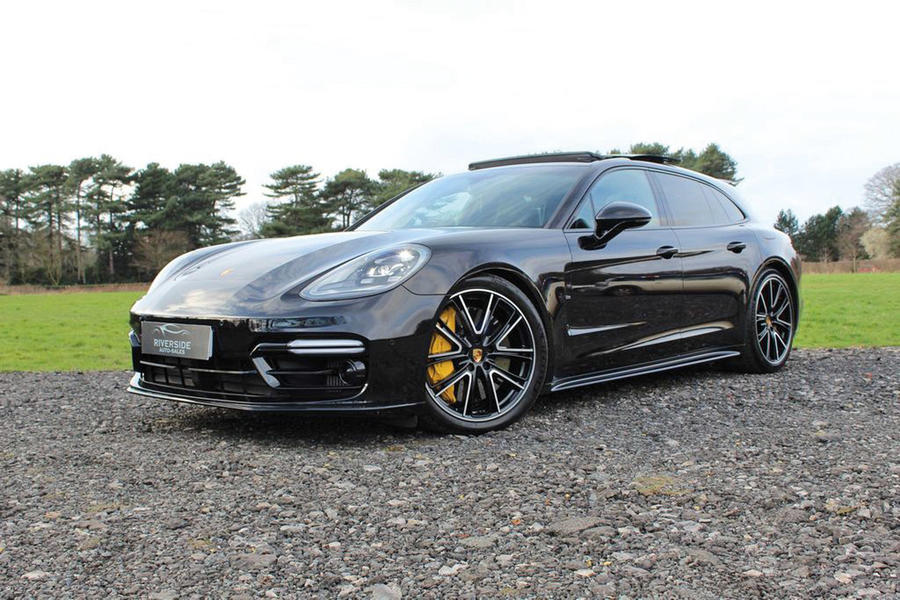 Porsche Panamera Turbo S E-Hybrid Sport Turismo, £109,000: If the i8’s boot is too small, try this on for size. Practical PHEVs don’t come quicker than this ballistic 2018-reg Panamera estate, which can dispatch 0-62mph in 3.4sec and offers around 22 miles of electric-only range. 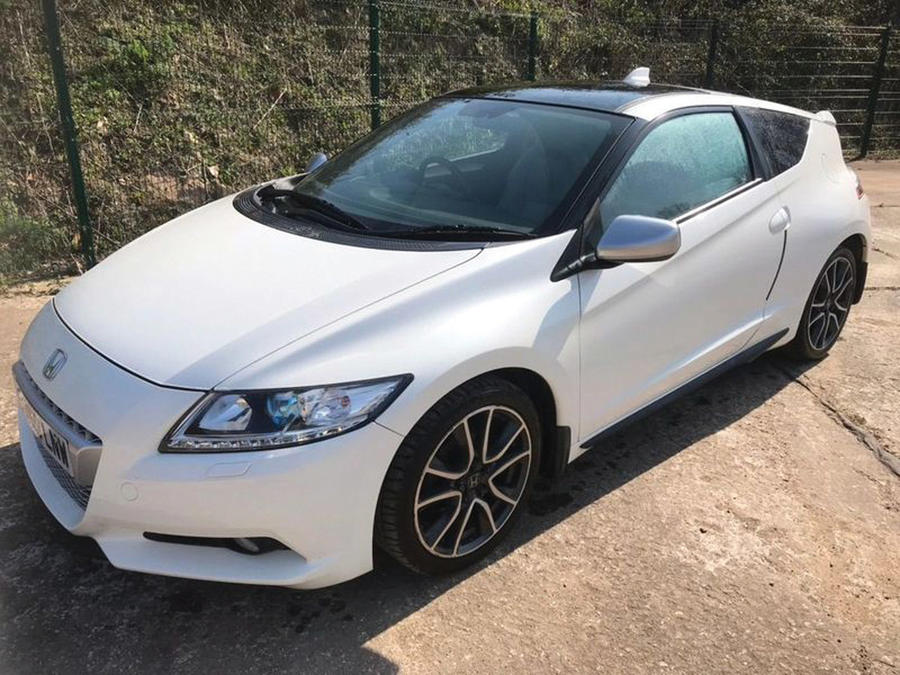 Honda CR-Z 1.5 i-VTEC GT, £4500: A fun, reliable and good-value hybrid comes in the curvaceous shape of the CR-Z. Range-topping GT models have heated leather seats and a sunroof. Any car found on this budget will have a relatively high mileage, so check the battery warning light isn’t shining. 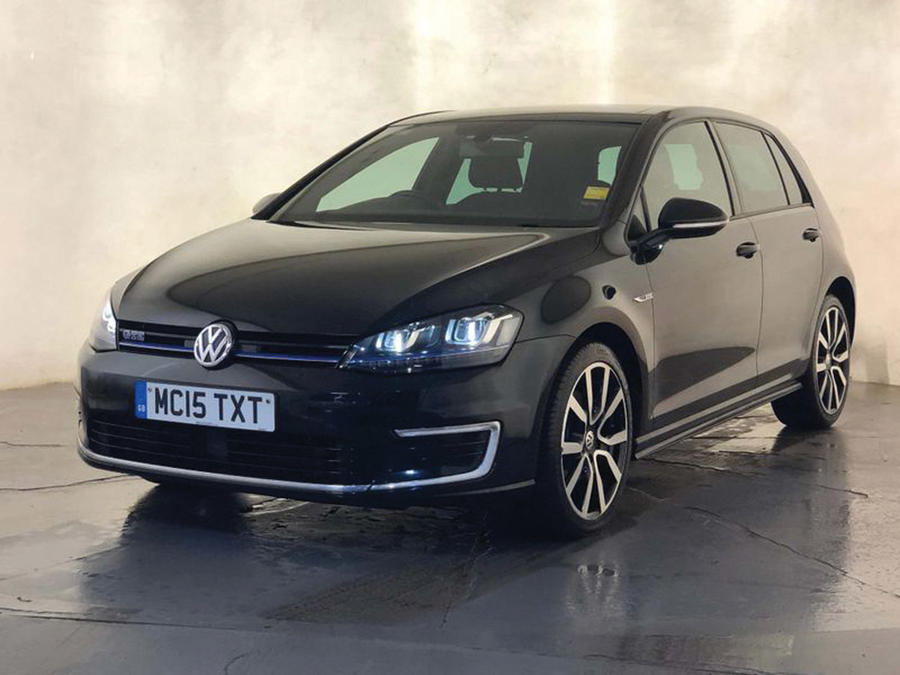 Volkswagen Golf GTE, £12,795: ‘Golf’ is an answer to many car buying queries, including a cheap PHEV. For £13k, you can get a 2015 high-miler; newer cars will push your budget to £20k. The versatile hatchback offers zingy acceleration, a well-packaged interior and a circa-20-mile EV range. 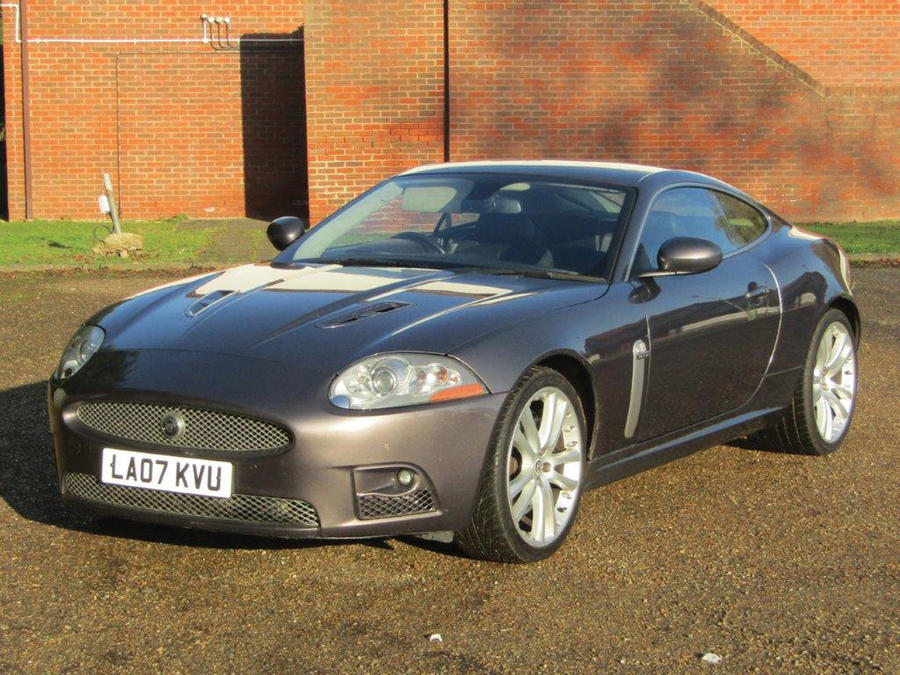 Jaguar XKR 4.2 Auto: This 174mph coupé from 2007 has a sledgehammer 4.2-litre V8 and passed through auction for just over £10,000. Four owners from new and 90,000 miles sounds fine, but a last service four years and 10,000 miles ago would make us sweat. We would want to check for any unwelcome noises suggesting supercharger-related issues and that the ZF gearbox had been properly serviced recently. While facelifted XKRs (from 2009) have a more potent 5.0 motor, they go for quite a few grand more, so a 4.2 is worth a punt. Just brace yourself, given Jaguar’s reliability record… 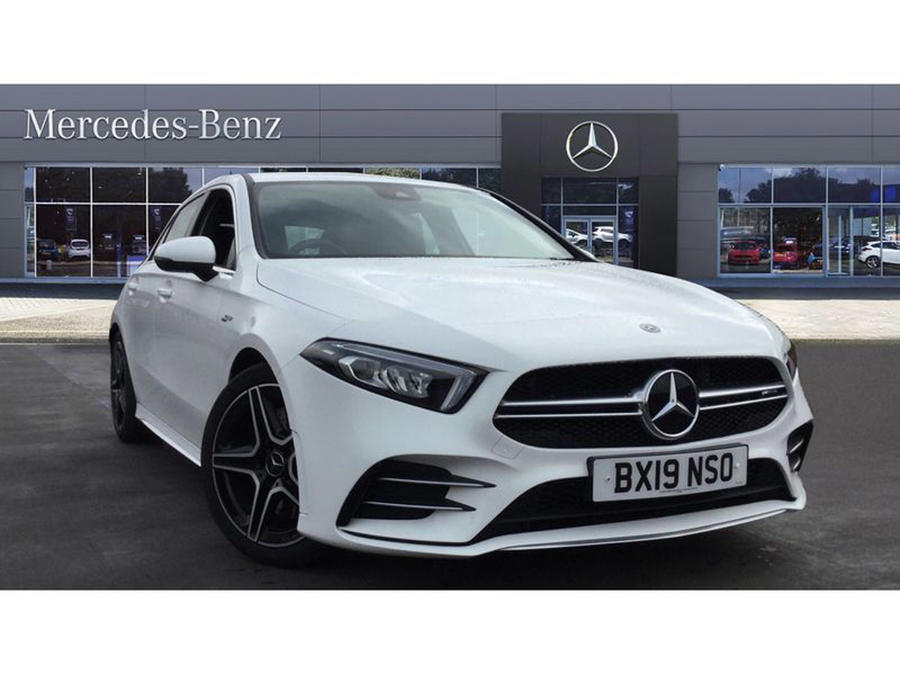 Mercedes-AMG A35, £28,000: The first AMG-fettled Mercedes-Benz A-Class, the Mercedes-AMG A 45, offered hair-raising pace and prodigious amounts of cornering grip, but it was very expensive. This entertaining 302bhp A35 model, based on the new A-Class, is AMG’s cheapest and could make a cunning buy for a savvy hot hatch fan. While dreamers may drool over the new A45, the man-maths reality may only stretch to cover the A35 – making used buys highly sought after. Look hard and you’ll find cars with £7000 off list price and just a few thousand miles, and they should hold their value well from there. 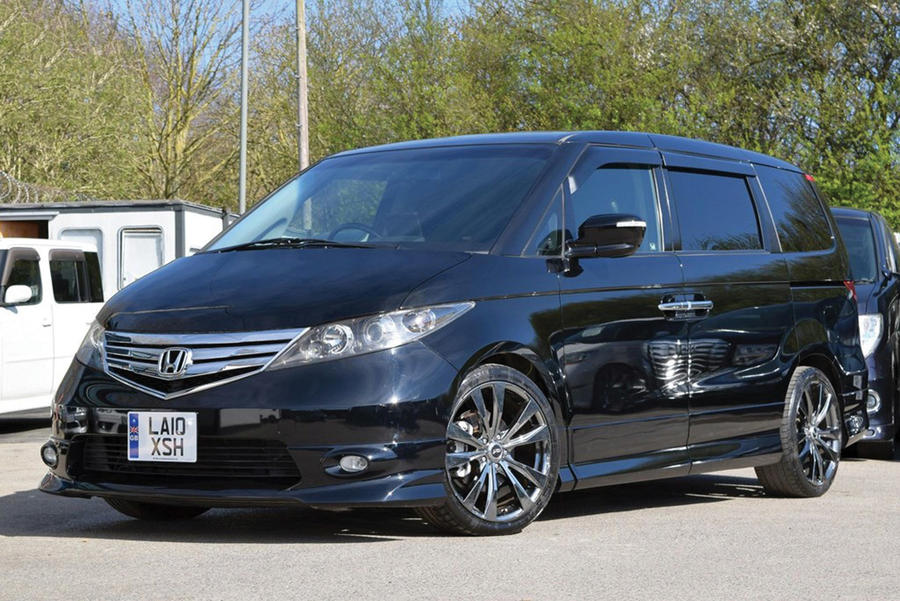 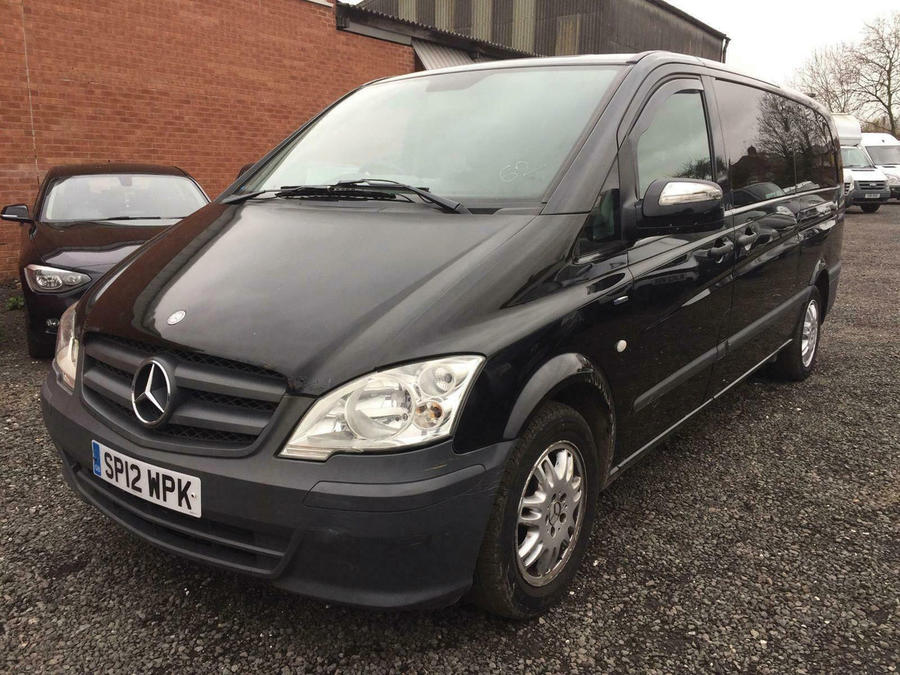 Mark Pearson: I don’t like to think of this as an eight-seat MPV; I prefer to think of it as a family man’s Honda NSX. Yup, you see, for starters there’s that lovely 2.4-litre VTEC motor under the bonnet, a typically clever Honda automatic gearbox and irreplaceable double-wishbone suspension all round. It’s a rigid old Hector, too, and has a low centre of gravity. Its luxo interior will cut quite a dash on the school run also. What you got, Felix?

Felix Page: Like you, Mark, I have cast my eye eastward, but not quite so far. Because who are we kidding? When it comes to hauling vast families, football teams or rock bands around in relative comfort, ’tis the three-pointed star that lights the way. This Benz is discreet enough to detract attention from any famous passengers, has all the tech wizardry of your average 2012 Mercedes-Benz E-Class and will be flamin’ frugal to boot.

MP: Um, yes, but it does look just like a van, whereas you must admit that my 2010 Honda is one hell of a sexy beast. And if you have as many kids as the buyers of these cars do, that’s clearly a very important factor!

FP: Every self-respecting enthusiast knows that driving a van is just about the most fun you can have on public roads. Besides, at the weekends, I can remove the rear seats and stick a couple of dirt bikes back there. Way more fun than any VTEC, no?

MP: No, don’t be silly. There’s dirt involved, and manual labour, so no fun there.

FP: It will be far less tiring than you telling all your neighbours why you didn’t just buy a Ford Galaxy.

I remember going to view the crz when it was released and was really disappointed, the original crx was so gorgeous and fast , sadly this was neither, I think that's why it was never replaced. I've bought the i8 just in a different guise, same engine and gearbox , same plug in hybrid , Mini Countryman !
si73 15 May 2020

I had a crz, loved it, found

I had a crz, loved it, found it quick enough, fun to drive and cheap to run, with the added bonus that it looked stunning.
LP in Brighton 15 May 2020

BMW i8 looks a bargain

I really fancy that i8 despite the fact that plug-in hybrids seem to have gone out of fashion.

But I actually bought a Honda CR-Z, albeit a newer more expensive version than the one illustrated. It's not fast, but it feels sporty and nimble has a 'proper' gearbox and costs very little to run (provided you avoided the crippling depreciation of buying new).  It's a pity that there's nothing like either of these cars built today.