BACK TO ALL NEWS
Currently reading: First drive: 2020 BMW 4 Series prototype
UP NEXT
New 2023 Porsche 911 GT3 RS is "most track-focused" ever

Jos van As, BMW’s head of driving dynamics, is grasping an imaginary steering wheel as he enthusiastically details the character of the new 4 Series Coupé. “It’s more sporting in every way compared with the old model,” he says. “But we’ve managed to improve overall comfort as well.”

Having just driven a prototype of the new model at 175mph along a German autobahn and then on some magnificently smooth back roads, I was eager to hear first-hand what the man responsible for its development had to say about its clearly more engaging properties.

But before I’d even had a chance to even pose the question after we pull into a shady layby in a sleepy town to swap cars (from the four-wheel-drive M440i xDrive into the altogether milder rear-driven 430i), he’s already singling out the variable electromechanical steering as the biggest benefactor among a whole series of changes that have been made to the Audi A5 and Mercedes-Benz C-Class rival.

“We’ve concentrated on making it more direct and responsive than in the recent past,” says the man who has spent more time yet in the upcoming two-door than probably anyone else with obvious pride. “There’s greater clarity and added linearity, too. We’ve incorporated measures to make the body structure a lot stiffer than before. It’s a better basis than with the four-door.” 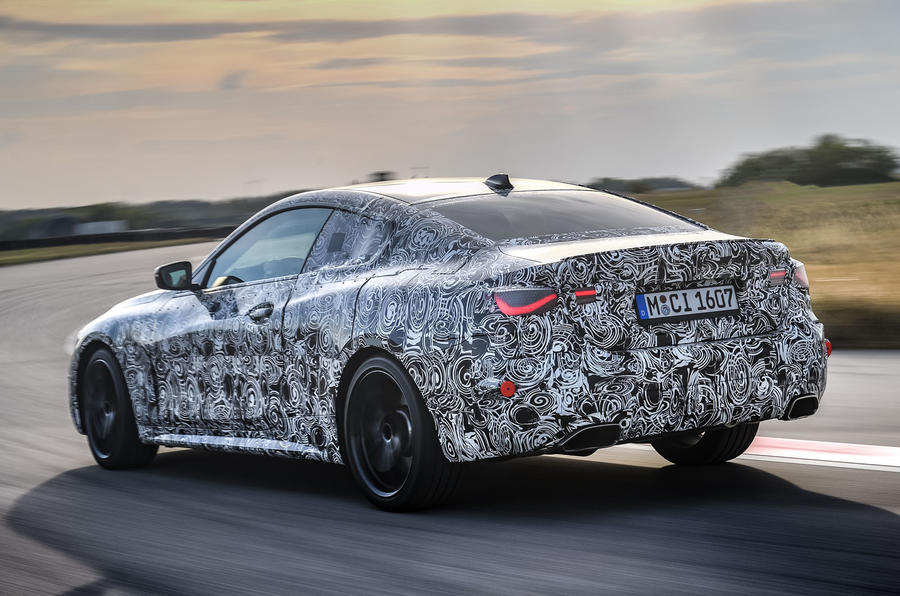 So that’s the message: the new 4 Series Coupé, which goes by the BMW codename G22, is intended to be not only a more sporting car than any of its predecessors but also more comfortable and, crucially, further differentiated from the 3 Series upon which it’s heavily based.

This is an observation that could be made of its styling as well. Although the two prototypes I drove were both heavily disguised, the new 4 Series appears sleeker than the current model and is clearly more differentiated from its saloon sibling.

We’ll avoid any comment on the controversial grille, which is set to mirror that of the Concept 4 Series Coupé revealed at the Frankfurt motor show last September, until we see the production version.

However, the car certainly cuts a sharper profile than before, with a long sweeping bonnet, a more heavily sloping roofline and a rather high-set bootline providing it with clear aesthetic links to the larger 8 Series Coupé and, according to van As, improved aerodynamics – namely a lower drag coefficient and added downforce. There’s also greater volume to the wheelhouses, allowing them to accommodate rims of up to 20in in diameter.

The new 4 Series looks bigger up close, although not excessively so. Underneath, it’s based around the same CLAR (Cluster Architecture) as all other recent BMWs that have a longitudinally mounted engine, giving it a wheelbase 42mm longer than its predecessor’s, at 2851mm. 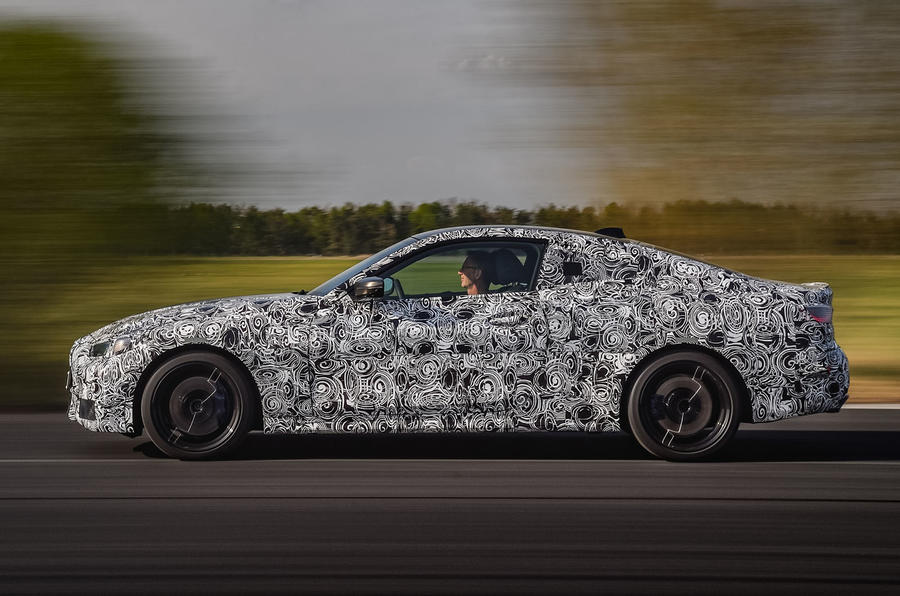 BMW engineers aren’t at liberty to reveal exact dimensions just yet, but they suggest the new car is also slightly longer and wider while being 57mm lower than the 3 Series saloon.

The Coupé will once again head a family of 4 Series models, with successors to the existing Cabriolet and Gran Coupé to follow in 2021. The latter four-door also forms the basis of the new electric saloon, the i4, which is also due out next year.

With more than six months still to go before the model heads into showrooms, BMW has confirmed just variants so far: the 430i and M440i. However, I’m told the line-up will extend to include replacements for the 420i, 430d and 435d as well.

The two-door will also, of course, form the basis of a second-generation M4, which is planned to be unveiled as a rival to the recently upgraded Audi RS5 Coupé and upcoming new Mercedes-AMG C63 Coupé within the next 12 months.

The M440i xDrive is the obvious highlight of the line-up at launch, offering junior M4 qualities and the added security and all-season capability of BMW’s latest four-wheel drive system. Its turbocharged 3.0-litre in-line six-cylinder engine is combined with a 48V electrical architecture in a development that introduces mild hybrid properties, including off-throttle coasting. 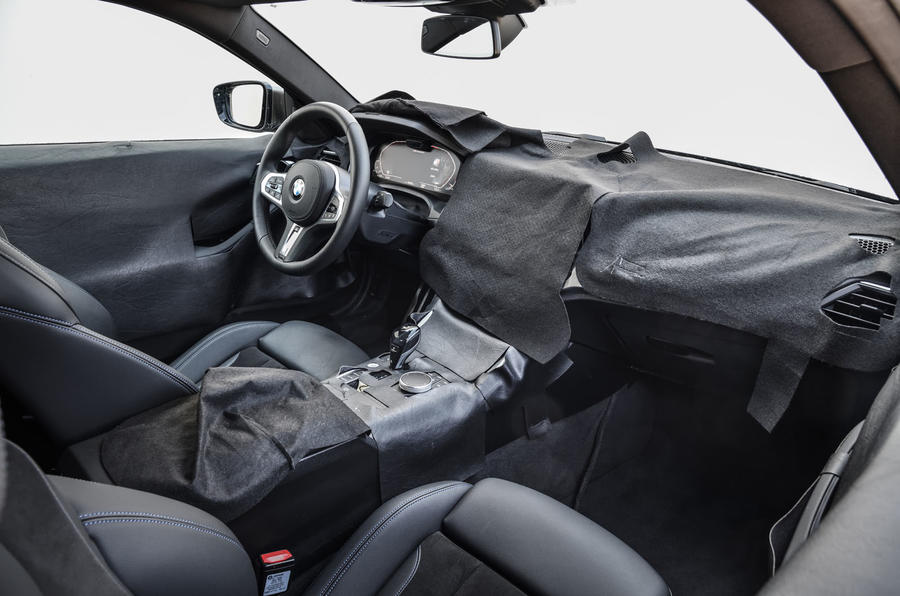 Making 369bhp between 5500rpm and 6500rpm and 369lb ft of torque from 1850-5000rpm, it’s smooth, punchy and nothing less than determined on a loaded throttle. By engaging the left-hand shift paddle for longer than a second, you can call up Sprint mode, in which the alternator provides an additional 11bhp and a good dollop of torque.

It’s not a particularly melodious engine, due in part to the adoption of a petrol particulate filter that mutes the exhaust note, but it’s engagingly responsive, with little lag and an inherent smoothness as it pulls to 7000rpm with a good deal of zest.

It’s the abundance of torque, though, that forms the basis of the performance. In fact, the engine is almost diesel-like in the way its urgency builds, giving the 430i impressive flexibility and relatively strong in-gear accelerative qualities across a wide range of revs.

The eight-speed torque-converter automatic gearbox is brilliantly suited to the engine’s strong torque characteristics, helping to endow the 430i with outstanding refinement. Its action is crisp and smooth in D mode, suitably rapid and eager in S and obliging via either the steering wheel-mounted paddles or a nudge of the gear selector in M. 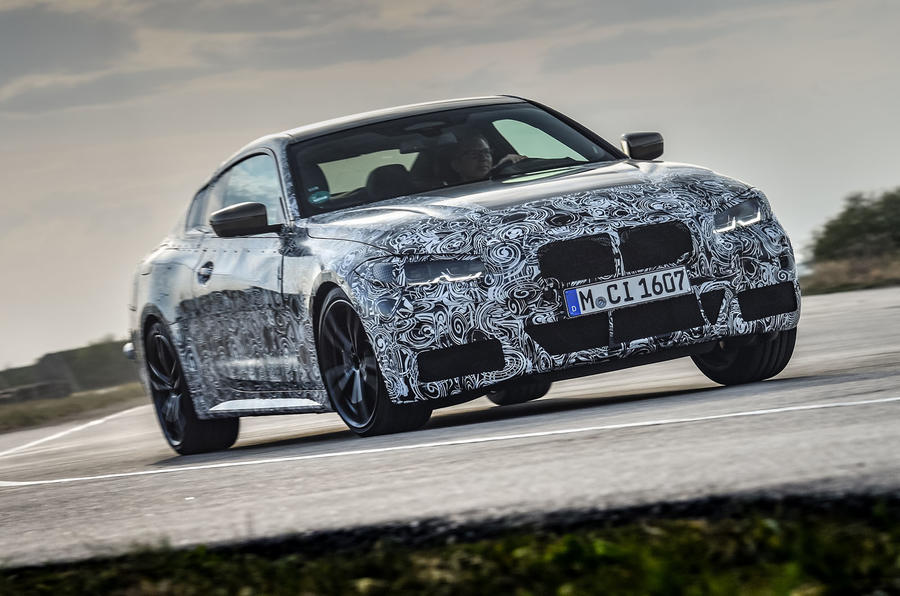 BMW won’t quote any acceleration figures just yet, but you can take it as read that the new model will eclipse the old 430i’s official 0-62mph time of 5.6sec. And given that it features the same driveline as the 330i, it should come close to matching, if not bettering, the saloon’s figures of between 38.7mpg and 41.5mpg on the WLTP combined test cycle.

Still, it’s a final layer of polish to the ride and handling that BMW is focusing its development on as it prepares to launch the new 4 Series. And although our impressions were garnered in a pair of high-mileage prototypes, there appears to be strong promise of a return to the driver-centric traits that characterised earlier incarnations of the two-door coupé, whose roots can be traced all the way to original 3 Series introduced back in 1975.

What BMW has achieved is a heightening of agility and driver engagement while further refining the levels of ride quality and comfort. Predictably, they’re similar to the improvements reflected on the latest 3 Series and are very much dependent on the selected driving mode. But with five different settings (Adaptive, Eco, Comfort, Sport and Sport Plus), the new 4 Series offers an even broader range of driving characteristics than before.

There’s precision and assurance in the latest incarnation of BMW’s variable sport steering system. It’s also more finely tuned, with less build-up of weighting and greater feedback. It quickens with lock, providing quite direct turn-in in combination with relaxed on-centre properties and impressive ease of manoeuvrability around town.

In a bid to achieve a 50:50 weight distribution front to rear, the bonnet, front wings, doors and front suspension towers are made from aluminium, combining with other unspecified weight-saving measures coped from the 3 Series.

Among the changes BMW has brought to the chassis in order to give the 4 Series a more sporting flavour are wider tracks than those of the 3 Series, with that at the rear extended by 23mm. This gives the coupé a particularly well-planted stance, which is further enhanced on the range-topping M440i by way of an otherwise-optional M Sport suspension set-up that lowers the ride height by 10mm. 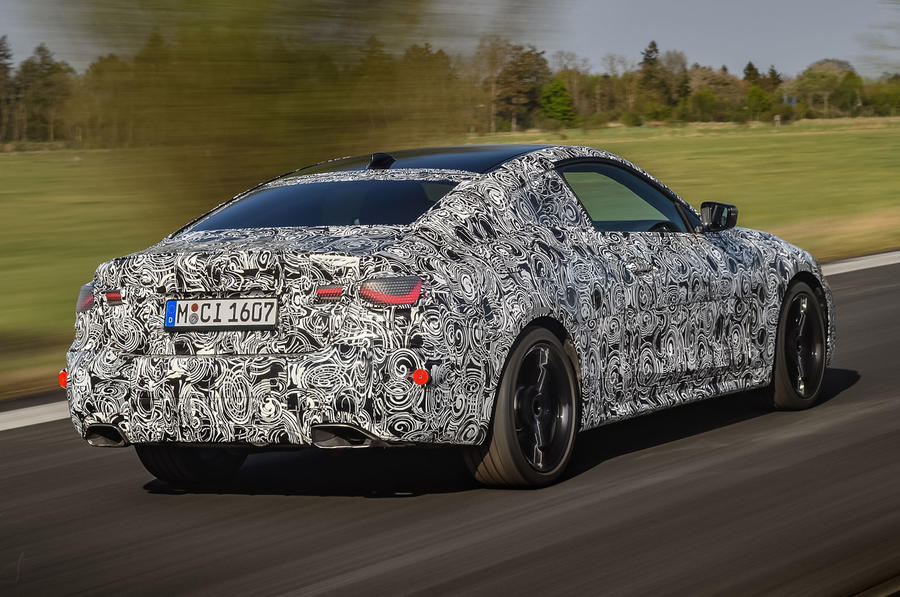 The suspension retains the same hardware as the 3 Series’, with an aluminium-intensive MacPherson strut layout at the front and five-link arrangement at the rear, although it has been given its own unique settings and kinematic properties.

Fundamental in achieving what van As describes as “more authentic steering feel” is additional camber brought to the front axle. “It makes for a more direct action and greater response off centre,” he reveals.

The long-time BMW engineer also credits a series of new braces and other measures as being key to enhanced sportiness. Included is a new shear panel within the front bulkhead, a newly designed strut across the front suspension towers and an additional A-frame support at the front of the engine bay. Together, these served to increase both the static and torsional stiffness of the body while providing a more rigid and firm basis for the suspension.

Another feature that van As attributes to the improved steering is a decision to fit every new 4 Series Coupé variant with BMW’s lift-related dampers. Brought over from the 3 Series, these feature both main and auxiliary springs as well as hydraulic bumpstops to progressively increase pressure within the damper under compression while also progressively adjusting rebound. “There’s greater wheel control and less corruption,” van As explains.

To this end, BMW will also offer adaptive damping as part of the optional M Sport package.

There’s an appealing tautness and progressiveness to the handling of the 430i, enabling it to corner in a flat and neutral manner. However, there’s also sufficient body movement for its limits to be communicated and allow you to explore the adjustability offered by the reworked chassis when its three-stage Dynamic Stability Control (DSC) system is switched into one of its more liberal modes.

The four-wheel drive of the M440i increases the amount of grip and enables you to carry greater speed through corners, but it’s no less engaging despite its added security.

While the adaptive set-up of the M440i is our early preferred choice, the passive suspension of the 430i does a pretty good job of soaking up nasty bumps in its Comfort mode. It’s quite firm – firmer than the 330i by way of comparison – but rebound is excellently controlled and road shock is nicely absorbed through the stiffened body structure.

We’ll have to wait to fully explore the new 4 Series, including its reworked two-plus-two interior, but these prototypes have made quite a positive first impression. Although the model has grown slightly, it feels more compact than its predecessor from the driver’s seat and is more appealing to drive, too.

BMW has clearly listened to the criticisms of the old model, not least of all its lack of true steering feel and overall engagement, and reacted with the sort of engineering solutions traditionally only reserved for its high-performance M models. As van As suggests, “It’s more authentic.” And that’s a good thing. 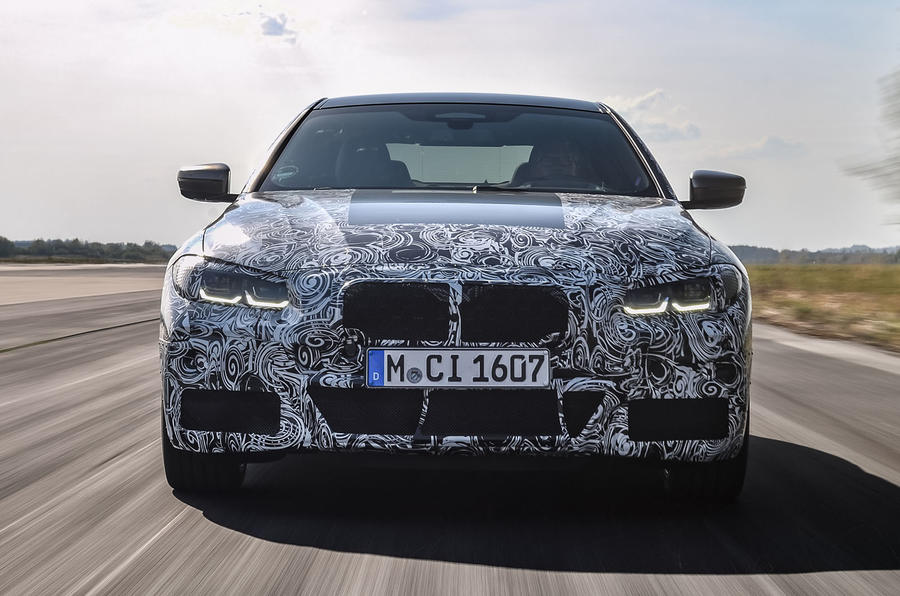 Is this guy funded by the German auto industry?

Peter C is bang on the money, again.

I need to read the articles before you do if I'm not just going to repeat what you've just posted. ;-)
lamcote 29 April 2020

This is EXACTLY what they said when they launched the last one but it was hardly noticeably sporty. It may indeed be better, but the degree of improvement they make these days seems to be miniscule in every way, apart from to the infotainment and dashboard!!

This is EXACTLY what they said when they launched the last one but it was hardly noticeably sporty. It may indeed be better, but the degree of improvement they make these days seems to be miniscule in every way, apart from to the infotainment and dashboard!!

car makers want to sell Cars, obviously, but today's drivers and those just passed or learning are much connected to the Internet, they want it in their cars too!, hence all the extra gubbins in a Car.