BACK TO ALL NEWS
Currently reading: BMW i8: Why the bold BMW had to die
UP NEXT
Analysis: Why the decline in diesel sales has slowed in 2022

The BMW i8 was an inspired car ahead of its time, says Andrew Frankel, yet it ends its life without being replaced and will be classified as a failure. Why?
Open gallery
Close

I first drove a BMW i8 in 2014. And when I was done, seeking to compare it to anything else that might remotely be considered a rival, I sat down and wrote: “It is the odd one out only because it is so demonstrably far ahead of its time. Others will react and may well do an even better job than the far from flawless i8, but for now it has the field to itself and its every success will be deserved.”

Well, I got that wrong. Others didn’t react. It was then and remains today the only car of its kind. Truly, I don’t think it occurred to me that it might fail, but fail it has: the fact that BMW has chosen not to replace it tells you that. As does losing half its value in its first year.

It takes a lot to make me sad at a car’s passing: these things we think we love are, after all, mere objects at our disposal and in this business there’s always some other interesting device to go and drive. But the i8, to me at least, is different. When I look back over all the long-term test cars I’ve run on this magazine, the McLaren 720S is obviously the one I miss most; but the i8 is next and not that far behind. 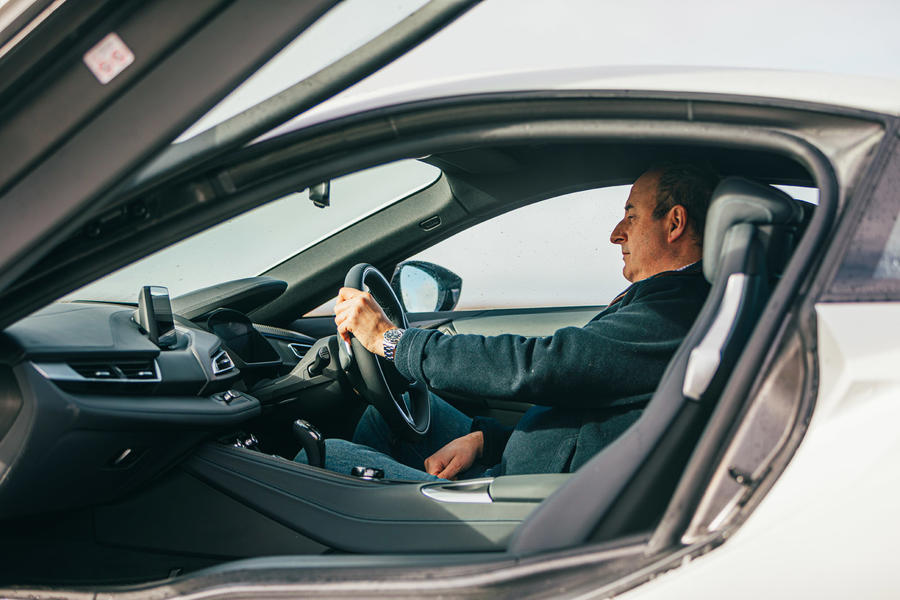 And I will miss it in two ways. Most simply, I’ll miss what it does. The quick adrenaline shot just upon seeing it first thing in the morning, coupled with the knowledge that it will make special everything from a cross-continental adventure to a trip to the village shop because you’ve run out of milk. It still looks incredible, the novelty of its lines having never worn off.

It has never received fair credit for the way it drives, either. I’m not terribly bothered whether it oversteers or understeers on the limit, because it’s not that kind of car. I care more about the fact that it’s light and beautifully damped, with accurate and pleasingly geared steering. I like the powertrain, too: it sounds terrific, has no lag, and if anyone sneers about the sound being synthesised, I’d refer them to almost any decent car on sale. They all have a synthesised soundtrack to some extent and in one way or another. I couldn’t care less.

But the best thing about driving the i8 is how well matched the chassis is to the powertrain. It doesn’t feel overpowered so you’re not always on the brakes, spoiling the rhythm of the road. But nor does it feel like it could do with another 200bhp: its tyres are unfashionably slender, which is another reason it feels so good. It is baby bear’s porridge: not too hot, not too cold, but just right.

But then there’s this whole other way I’ll miss it and, in fact, it is this rather more cerebral fondness that makes its departure something truly to regret. For with the i8, BMW revealed to the world a way forward at least for a certain kind of car. A way where your car still gets to go hard and sound good. A way where it’s actually even better to drive because it is so damn light. A way where you can have your cake yet not get fat: a supercar that’ll do 40mpg almost however you drive it. 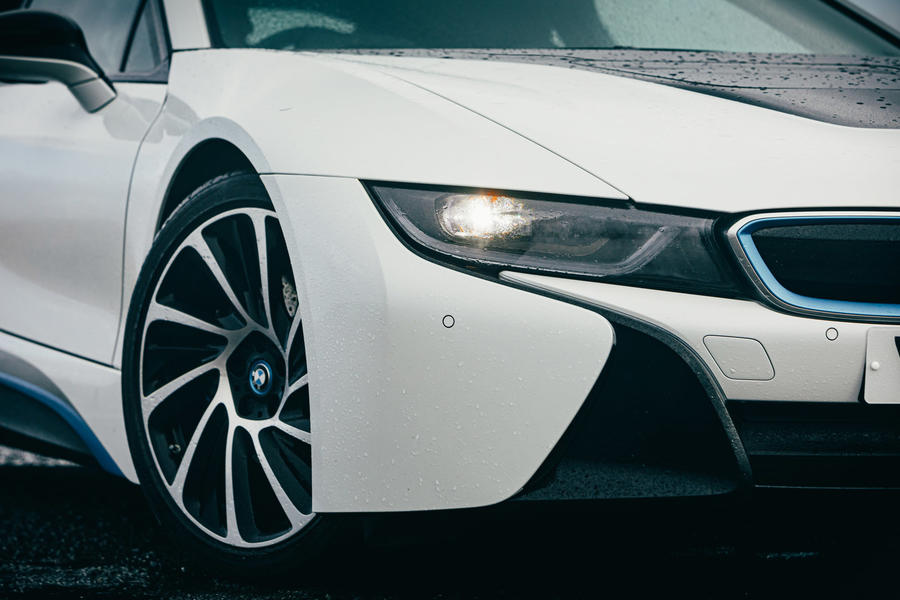 And the world’s response? “A BMW with a six-figure price and a three-cylinder engine from a Mini? You’re kidding, right?” I admire BMW so much for having the courage to do this car and that bravery deserved far better than this. I imagine the deep breaths taken around the boardroom table when the plan for this carbon-framed, aluminium-clad mid-engined masterpiece was signed off. It would have been hideously expensive to develop. They’d have known that, bar a convertible, there was no other car they’d be able to spin off the same platform. But they went ahead and did it anyway because it was the right car to do.

How were they to know that even by the 2020s, it would still be the wrong time to do it? Seems nuts, doesn’t it? If I were to sit down and specify a less unsustainable kind of long-distance driver’s car for our era, the only reason it wouldn’t look like this is because I’m not smart enough to have thought of it. Yet BMW is getting rid of it while, at the same time, launching the M8 Competition, another similarly priced 2+2 coupé but one that weighs nearly two tonnes and is powered by a twin-turbo V8 engine.

But you can’t blame BMW for the death of the i8. It had six years in the marketplace, so they gave it a decent run and it’s not their fault the world proved resistant to the sea change it represented.

Even so, the real source of my sadness is that if BMW did replace it, I think its successor would stand a very good chance indeed. We live in a completely different world from that into which the i8 was born and, in one more generation’s time, there will be no more two-tonne V8s. But there will be plenty of lightweight coupés with downsized hybrid powertrains because, with pure EVs, those are the only cars of this type that are going to survive the transition that is so swiftly coming our way. 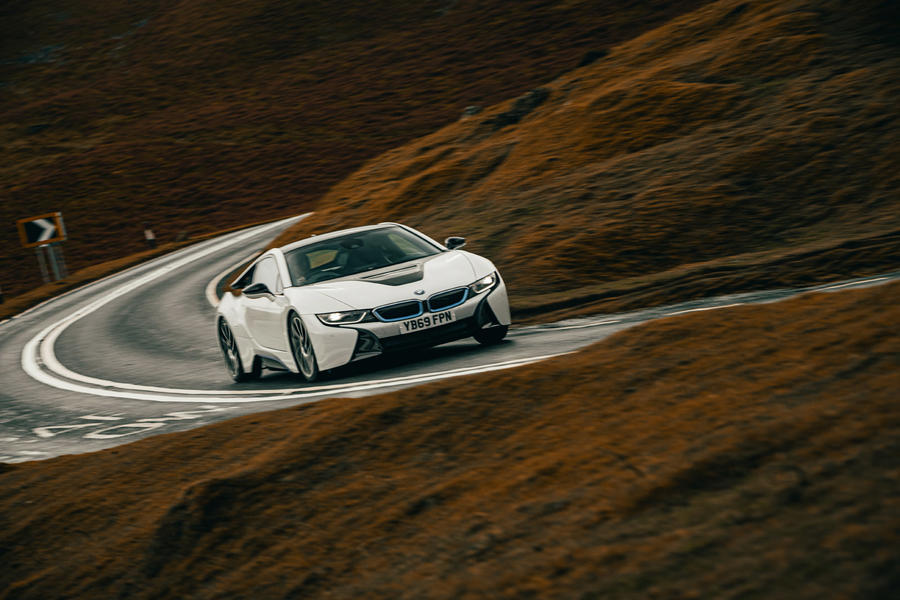 Sure, some issues would have needed to have been addressed – more luggage room and a more special interior among them – but these are relative details. With a few years’ development, a new i8 would have more power, go further on electrons alone and use less fuel. It’d be even more relevant and then the world would finally wake up to the wonders within.

But now it won’t get that chance. And what can we learn from this? That even producing one of the most advanced, interesting, attractive and effective cars of its time is no guarantee of success. The lesson of the i8 story is to try less hard, take fewer risks and do less well. And that’s what is saddest of all. 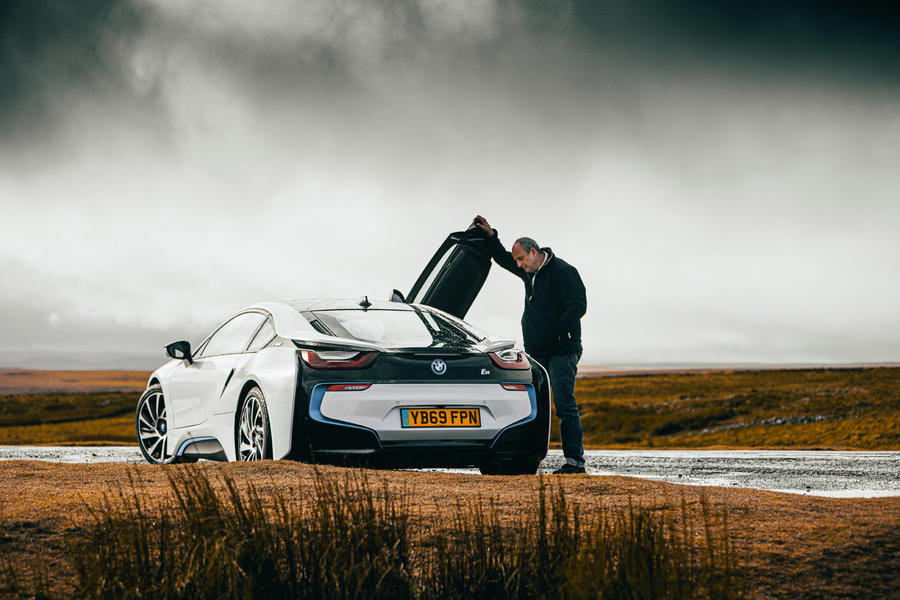 The i8 seems to be an exceptionally robust car, with occasional electronic niggles reported and not much else. Remember that depreciation is vertiginous in the first year but flattens out rapidly after that, so a nearly new example is an even better bet than usual. Consider whether the roadster is really worth the extra premium – I’d have the coupé all day long – and remember the car’s flaws: minimal rear room, a tiny boot and doors that mean you always have to park in a space where no one can park too close next to you.

What about the BMW i3?

Although the i8 is dead, happily BMW’s ‘i’ adventure is not, but it seems that in future it will make only electric cars. First is the iX3, a Jaguar I-Pace and Audi E-tron rival coming this year, followed by an BMW BMW i4 next year, a car with Tesla’s Model 3 in its sights.

For now, though, there is the trusty i3, launched before even the i8 and, for now at least and despite rumours of its imminent demise, apparently safe from the executioner’s axe. For while it has never been a strong seller – anything but, in fact – sales have increased every single year since it went on sale in 2013, helped by changing attitudes, increasingly tax-friendly legislation, a couple of well-timed technology upgrades and closely controlled pricing. 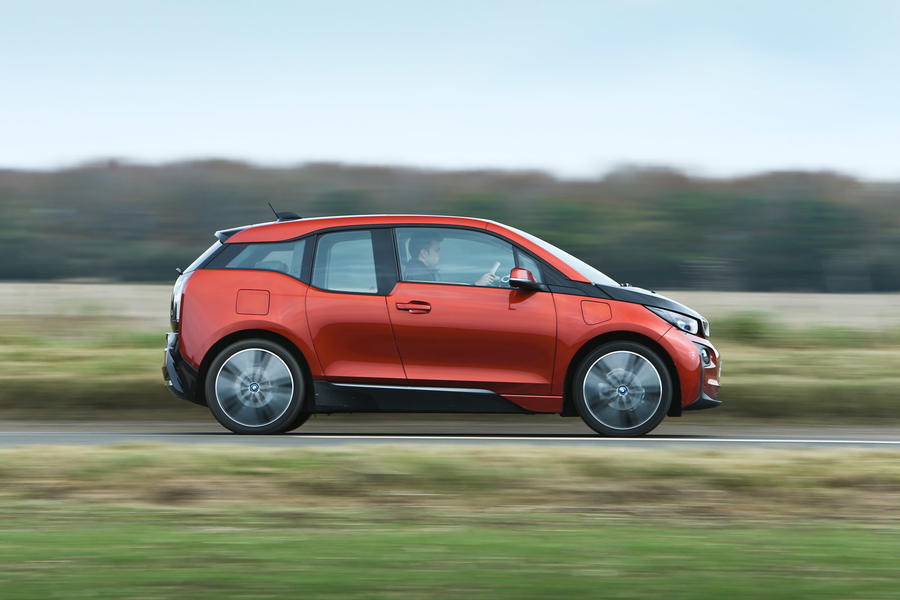 And if it can be made to fit your life and you don’t mind its highly alternative appearance, I think there remains a strong case for the i3. It’s quick, it’s fun and the interior still feels fresh and modern. Just remember that the range-extender model is no longer on sale so you’ll have to put up with either a pure EV or find a REX on the used market.

How much for an i8 today? 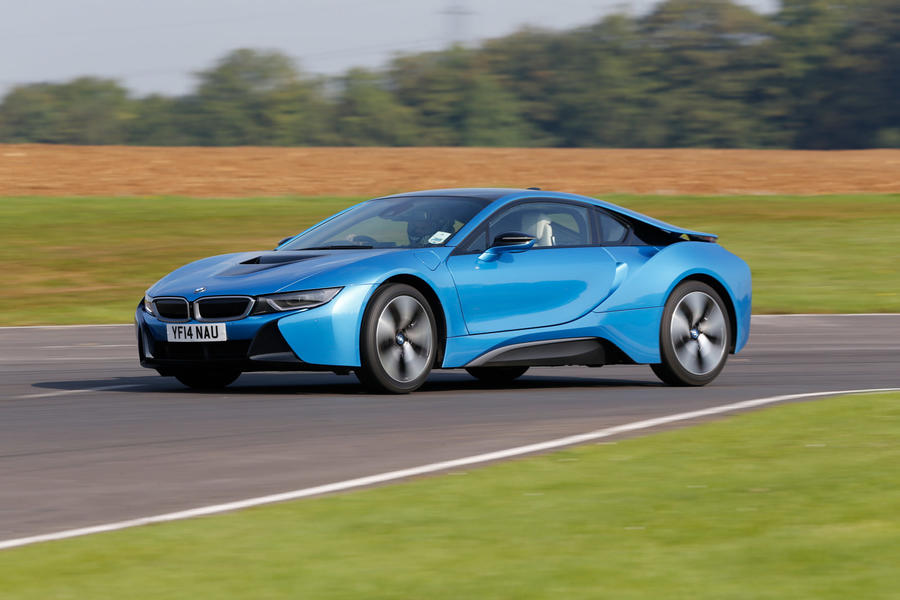 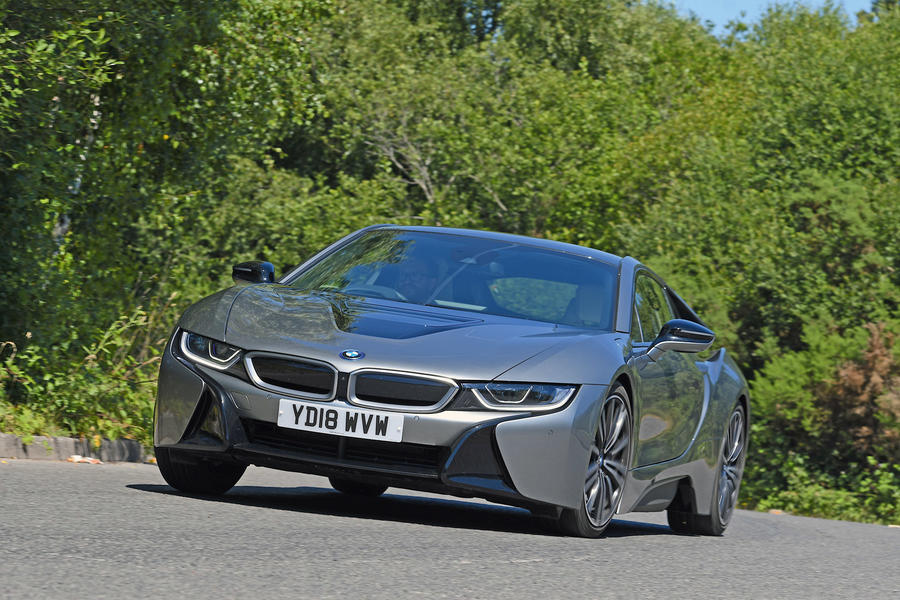 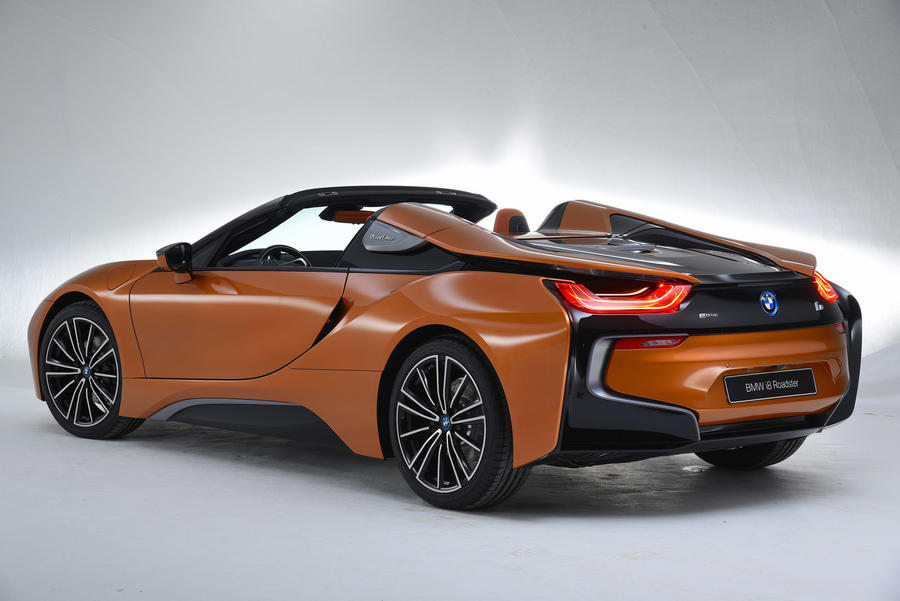 2019 i8 Roadster - £76,000, 5 miles: Proportionally, Roadsters lose even more money than coupés in their first year. The roof works well, but it spoils somewhat the lines of the car.

The i8 is the BMW I most lust after, but one which I'll never own, or even drive, Why? If you are middle aged or older you cannot enter, and even worse exit, this car without needing to visit a chiropracter every time. I know, as I actually got in one once, and had back pain for days afterward. As far as the rear seat, I don't think you can even get a bag through that ridiculous opening, much less a child. Conversely, adults have fewer problems with 911s and Corvettes, which is a reason these cars remain popular with those who can afford them. Further, the young cannot usually afford an i8, while the Lotus Elise, equally difficult to enter and exit, at least is somewhat attainable for the young people who can actually get in it. Big fail on actually being usable, especially for the price.

The i3 fails in different ways. The original range of 80 miles was inadequate, and the range extender's inadequate 75 extra miles due to it's puny 1.9 gallon tank was even more ridiculous for the money, making a reasonable 300 mile trip totally impractical (it would require at least 3 fillups along the way!). The upright boxiness could be forgiven if the packaging was brilliant, but alas it's not. The rear seat is somewhat cramped, and is difficult to enter and exit despite the wide opening due to a downward protrusion from the roof right where your head needs to be to get in and out! Ouch every time! Plus, opening the rear door must be sequenced with the front, which gets to be a real PIA (had to do it numerous times once on a tour of homes). A Mazda RX-8 is easier to deal with, and it's a lot sexier and better to drive, not to mention more practical. If you don't need a practical rear seat, then why drive an ugly upright box? So, an epic fail on so many counts.

I hope the designers of the next i series try living with their creations before releasing them.

I think it failed because of

I think it failed because of how it looks. It looks like a supercar, and people dont want to drive around day to day in a car that draws so much attention. But if you were in the market for a supercar, you probably want a mechanical package a bit more mainstream. If you only do a few thousand miles a year, like most supercars, no one cares about fuel costs. This seems to be a great car, designed to answer a question almost no one ever asked.

This car is a failure because it is a failure. Overpriced, compromised and under delivered, it was not a serious contender in any way. Meant as a hold over till their real EV  were to come out. It expired while waiting. BMW simply got killed by Tesla pure and simple.