BACK TO ALL NEWS
Currently reading: Buy them before we do: second-hand picks for 11 December
UP NEXT
First drive: 2022 BMW XM prototype

Buy them before we do: second-hand picks for 11 December

The cheapest Panameras on offer are the leggiest examples of the 3.0-litre diesel V6, which is frugal and torquey but sorely wanting when it comes to outright power and dynamic intent.

You can pay as little as £16,500 for one of these oil-burners, but for just a few grand more you could nab a much more exciting 4S, with a stonking great naturally aspirated 4.8-litre petrol V8 that sends 395bhp to all four wheels and makes a nice enough noise while doing so.

It goes without saying that this is a particularly thirsty powerplant: expect to achieve average economy of around 25mpg on long jaunts and substantially less than that in traffic.

What it lacks in efficiency, however, it more than makes up in raw, accessible grunt. At its 2009 launch, critics of the Panamera (and indeed the Cayenne SUV), saw the introduction of big, heavy cars as a dilution of the Porsche brand – and these as cars that certainly couldn’t redeem themselves by virtue of their universally pleasing designs. But they were soon silenced by this V8 super-saloon’s 911-aping qualities.

The 0-62mph sprint could be dispatched in just 5.0sec (or even quicker if it was equipped with the Sport Chrono package) and top speed was a claimed 175mph. But arguably more impressive was this near-two tonne behemoth’s poise and agility away from the autobahn.

“It suddenly feels like a proper sports car,” we remarked on our first drive, hailing its pure steering response, competent four-wheel drive system and snappy acceleration as its most impressive qualities. Prices for the Panamera 4S originally started at around £84,000, which, accounting for inflation, is equivalent to nearly £109,000 today. It’s all the more jaw-dropping, then, that the 11-year-old example we found asks less than £20,000.

With 83,000 miles on the clock, it has hardly been driven to death, and its unmarked interior and rash-free alloys suggest that previous owners have been of the careful variety.

Prices for the Mk1 Panamera are unlikely to surge any time soon, but the cachet attached to its Porsche badge should keep values from plummeting much further. Our advice? Take advantage of that fearsome depreciation and experience a grumbling atmo V8 while you still can.

Subaru BRZ, £28,000: The BRZ has been taken off sale and the new version won’t be coming to this country, so this is as new an example as you will now find. An ex-demonstrator, it has done just 1000 miles and comes equipped with all the bells and whistles you could want. 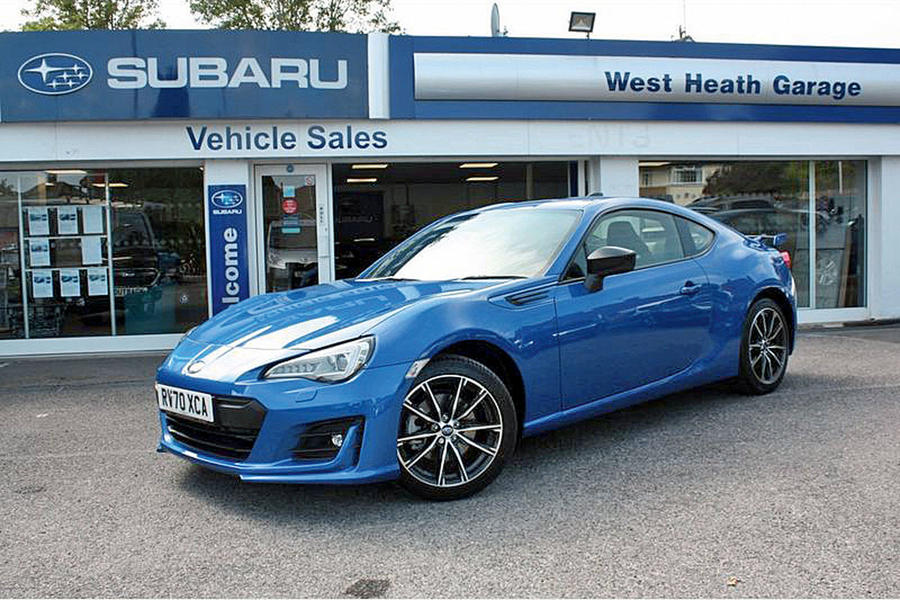 Land Rover Discovery 4, £18,250: Given how cheap the third-generation Discovery has become, it’s surprising that prices for the near-identical Discovery 4 have held so strong. This is big money for a seven-year-old car, but it’s a nice example and has the revered twin-turbocharged diesel V6 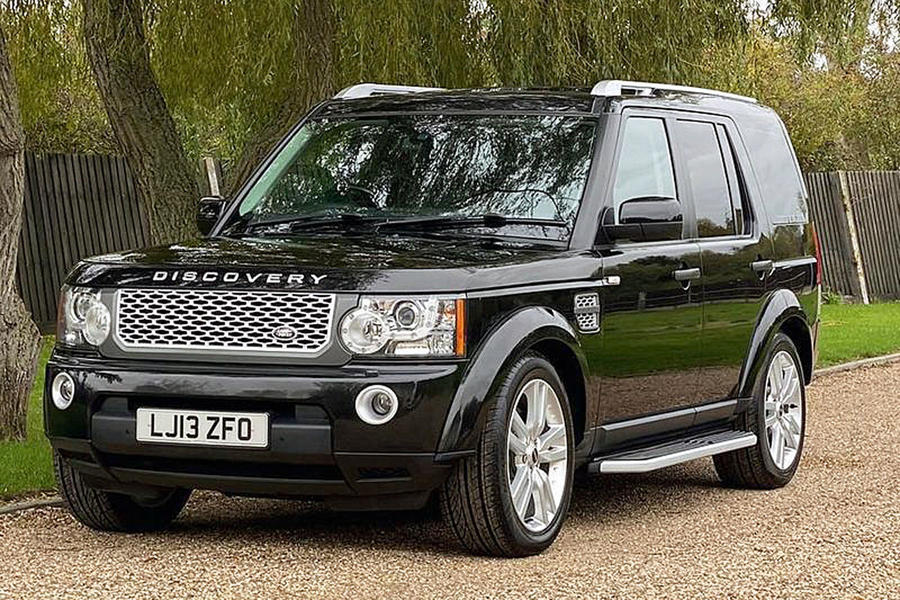 Honda CRX, £17,995: Here’s proof, if any were needed, that the classics of tomorrow won’t all be Italian supercars and leather-soaked GTs. The CR-X is a handsome and rare runaround that doesn’t disappoint in corners. The trick is finding a stock one, which clearly won’t come cheap. 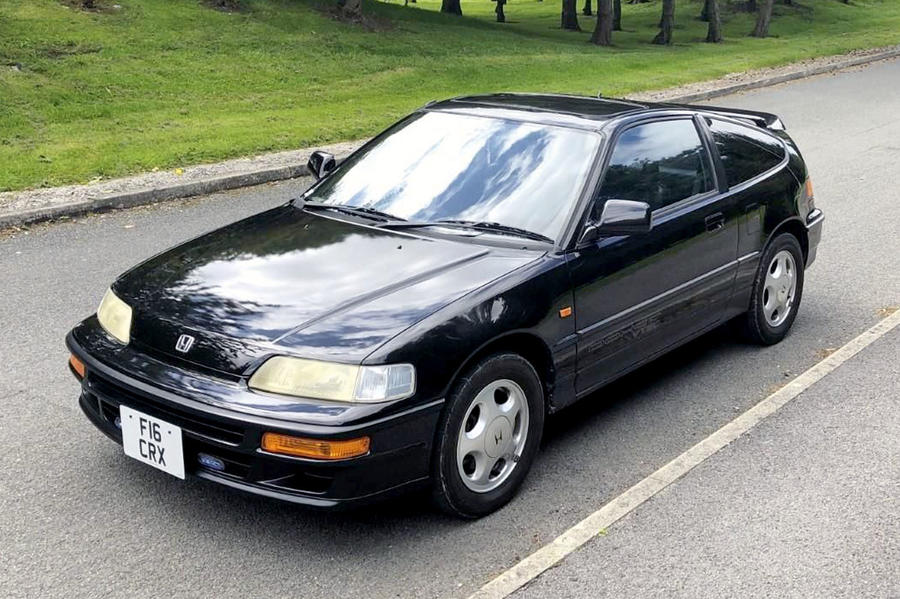 Bentley Brooklands, £139,950: You could buy a new V8 Flying Spur for £20,000 more, but would that have the same presence as this ultraexclusive coupé? Bentley’s 6.75-litre V12 has been put out to pasture, so if you want a taste, this is one of the classiest vessels in which to have it. 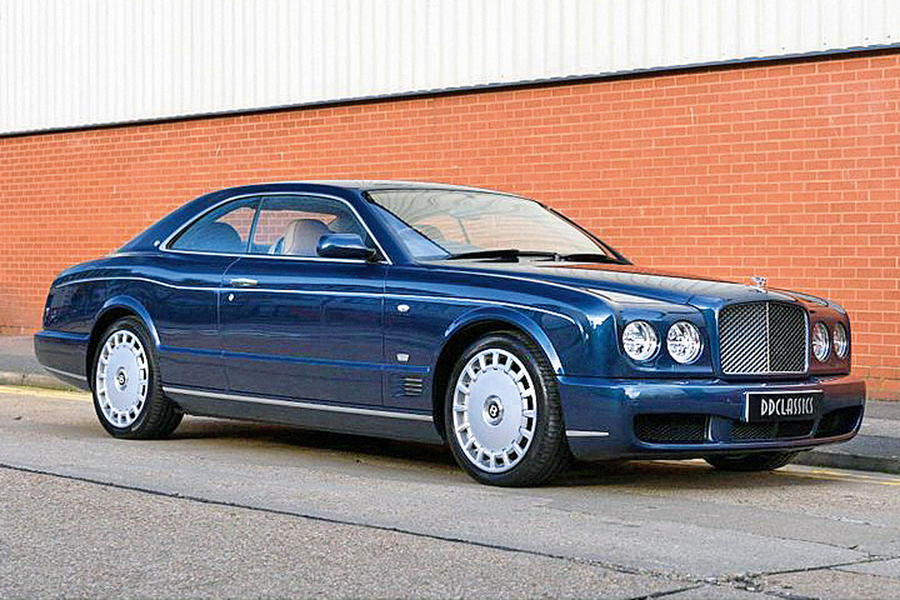 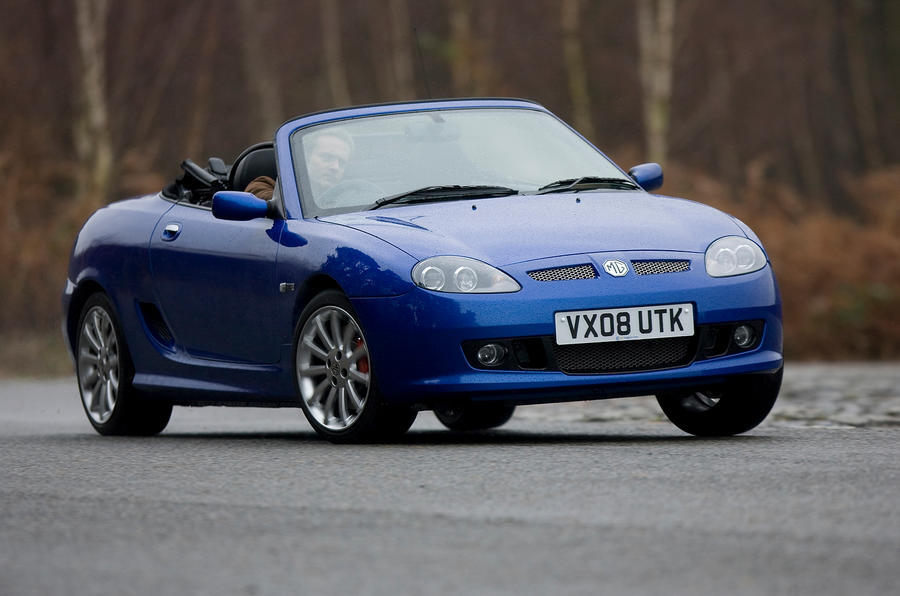 MG TF: The once-maligned TF jostles with same-aged Mk2 Mazda MX-5s and Mk3 Toyota MR2s in the classifieds, so the seller of this 1999 car is being brave in asking for more than £3000. We would view it as an investment given the way prices look to be going – and because this is a rare 75th Anniversary edition (check out the fancy red interior).

Ford Mustang Mach-1: Ford has revived the hallowed Mach 1 name for an upgraded version of the current V8 Mustang, and it will be the first time the badge has made its way to a right-hand-drive car. About time, we say, because this top-rung version of the pony car has long been regarded as one of the most desirable. Crossing the block at a shade under £60,000, this 1969 example retains its fearsome hood scoop, rear window louvres and snowplough-style front splitter. And with nearly 90,000 miles on the odometer, it has clearly been enjoyed so far, so let’s hope that it’s not destined to languish in some private collection. 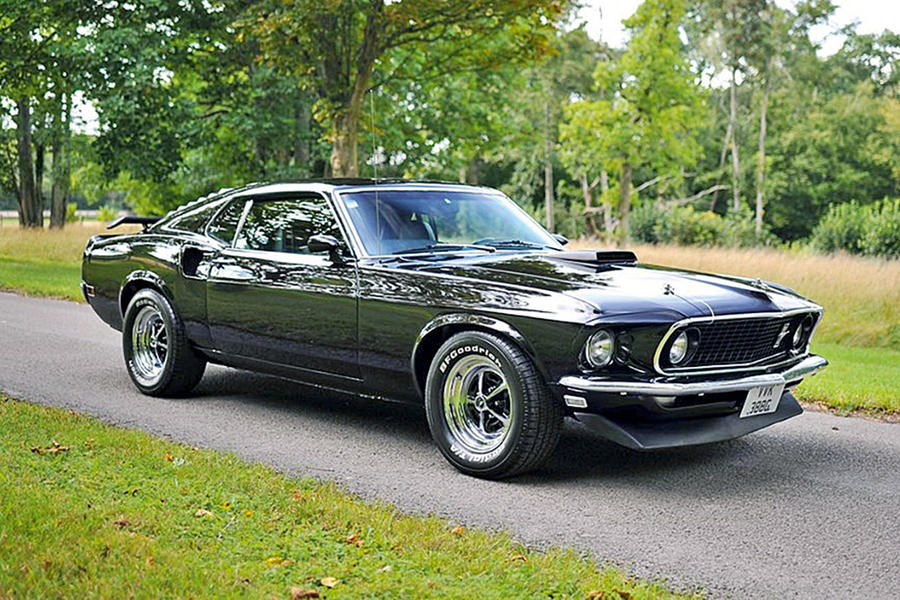 Vauxhall Vectra SRI, £2495: Depending on who you ask, the Vauxhall Vectra is either an undeservedly overlooked answer to the marvellous Ford Mondeo or an uninspiring embodiment of no-frills motoring. Let’s look at the sporty SRi variant in isolation, though, because it seems to be quite a tempting proposition these days. Its 2.2-litre 16-valve four-cylinder engine won’t set any land speed records, but the subtle bodykit lends some excitement to its otherwise anonymous threebox form and the Recaro sports seats give its interior some much-needed embellishment. 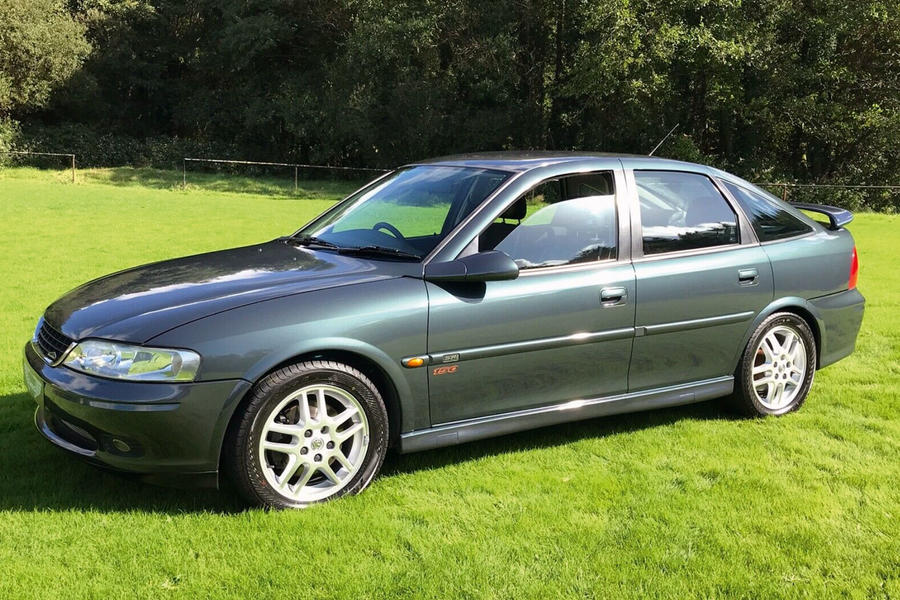 Max Adams: Fancy a stealthy Ford Focus ST? My 2007 Volvo V50 uses the same turbocharged five-cylinder engine, plus this one has a manual gearbox to make the most of its 227bhp. The owner seems to have cherished it, because there’s fresh Michelin rubber all round, refurbished wheels and history of cambelt and water pump changes. 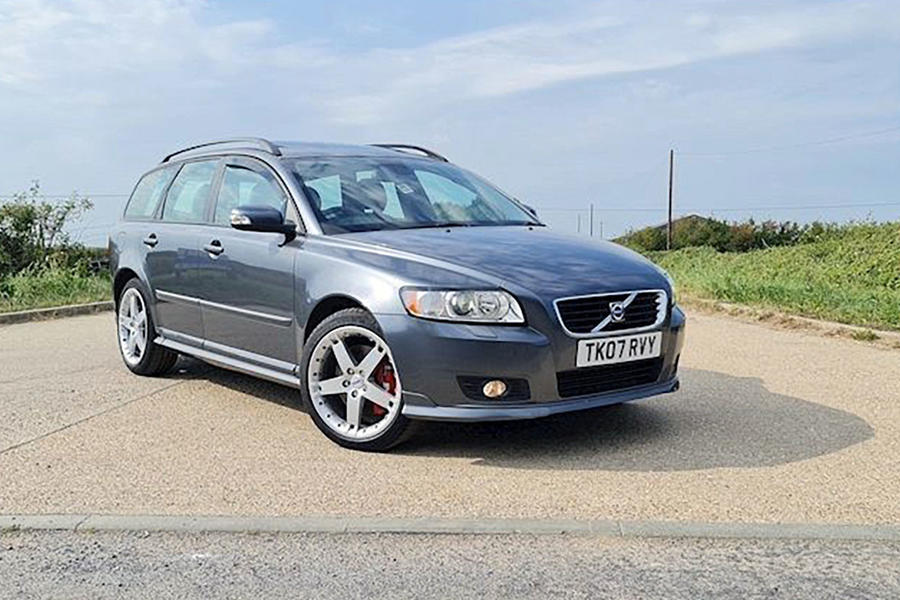 Felix Page: A commendable effort, but it would have James spending lots of time Q-ing at petrol stations. My Audi A3 3.2 is essentially a Mk4 Volkswagen Golf R32 without the image problem: no speed-bump-scraping bodykit here, just rare S Line alloys and enough leather to stock your local Burberry outlet. The mileage is pleasingly low, too, so there’s little doubt it will still feel as fresh as a daisy on the road. Electric sunroof, too.

MA Funny you should mention the Mk4 Golf because that was one of the dullest cars ever made, and the contemporary Focus promptly wiped the floor with it. My V50 is essentially a Focus underneath, so not only is it understated but, secretly, it’s a nice steer too.

FP Good point, but it does rather beg the question: why wouldn’t you just buy the ST? I’ll concede the added lairiness might put off introverts, but a fast Ford should really be just that.

MA It wouldn’t be the subtle choice James is looking for, plus there wasn’t an ST estate at the time. Also, I would rather have a Mk5 Golf GTI than your big-engined Audi. 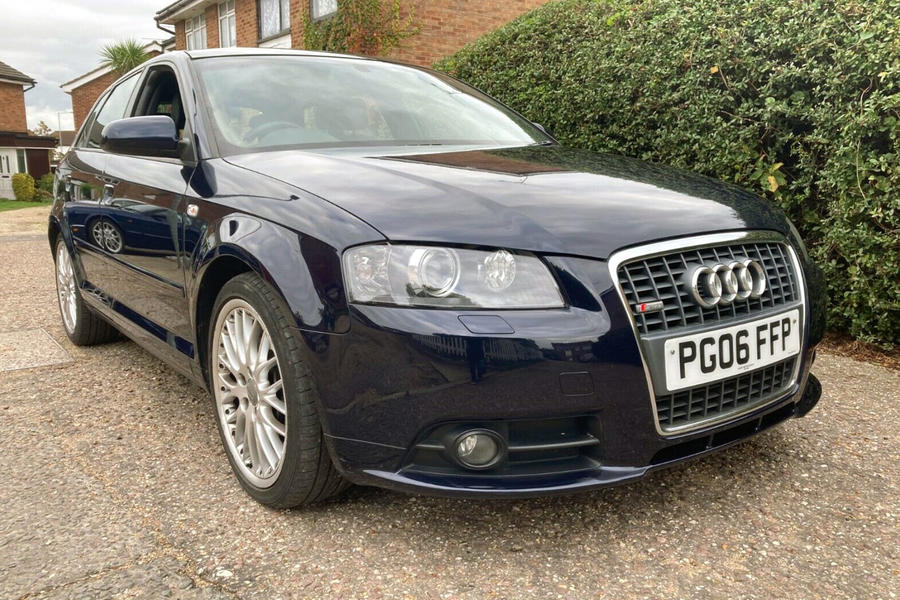 FP Ah, the obvious choice then? This is a hot hatch for the cultured aficionado; your Volvo is just a way of making the dogs feel queasy.

Must have a manual box, on 18"s (wheel rims) , maybe not be your choice, but it made me grin lots of times.

Is it really surprising that the values of Discovery 4 are holding up so well? Its a classy looking, desirable motor, I'm sure many owners will hold on to them rather than moving onto the embarrassing Disco 5.

What kind of moron doesn't know their VAG hatches? The 3.2 A3 was based on the Mk5 Golf architecture. I'd have it. Narrow angle V6 > inline 5