From £14,5108
Volkswagen successfully miniaturises the performance Golf’s recipe for the first time; the Polo GTI is desirable, well rounded and fun to drive
Open gallery
Close

When you read the letters ‘GTI’, whether it’s in the first sentence of a car review or on the grille of a hatchback, you think ‘Golf’ – don’t you?

Bet you just have. Can’t help but. The Golf GTI celebrated its 40th anniversary last year, after all, and although Volkswagen has been trying to for more than two decades now, it has never quite successfully developed its defining hot hatch identity into a proper performance sub-brand.

There have been good attempts to do that (think Lupo GTI) and not-so-good ones (Mk3 Polo GTI, anyone?) since the mid-1990s, of course. But now there’s a new and more concerted bid to turn ‘GTI’ into an established family of models, and it involves the upcoming Up GTI city car and this: the go-faster version of the sixth-generation Polo.

As this car’s key creators will tell you, VW has toyed with the idea of a proper, supermini-sized GTI on previous attempts, committing to cars midway through a model lifecycle and adapting existing mechanical platforms for the purpose rather than designing them from scratch. But no longer. This Polo GTI has been in the making for the past three years, from the earliest design and specification stages of the VW Group’s ‘MQB-A0’ platform. As a result, the specialised powertrain, suspension and steering components it needs in order to be the best hot hatchback it can be have already been provided – they’re on the shelf, ready to go – while the car’s chassis has already been designed to accept the 18in wheels for the job.

The new Polo GTI gets the Golf GTI’s 2.0-litre turbocharged petrol engine; it’s slightly detuned to 197bhp and 236lb ft of torque but still strong enough to give the car a sub-7.0sec 0-62mph acceleration claim and top speed within a whisker of 150mph.

It’ll be available in May 2018 with a six-speed dual-clutch automatic gearbox, or with a six-speed manual later in the year. It gets lowered, stiffened suspension springs, uprated anti-roll bars and upgraded passive dampers as standard, but it can be had with switchable ‘sport select’ suspension as an option (which isn’t ‘DCC’ adaptive damping as such but instead describes dampers with two lots of compression and rebound settings that you can chop and change between electronically via the car’s driving modes).

Compared with the standard Polo on which it’s based, the GTI also has completely different front suspension knuckles, a stiffer torsion beam at the rear, rerated suspension bushings and entirely different axle geometries and roll centres. On the face of it – not just on the face of it, really – it’s a proper piece of performance engineering. 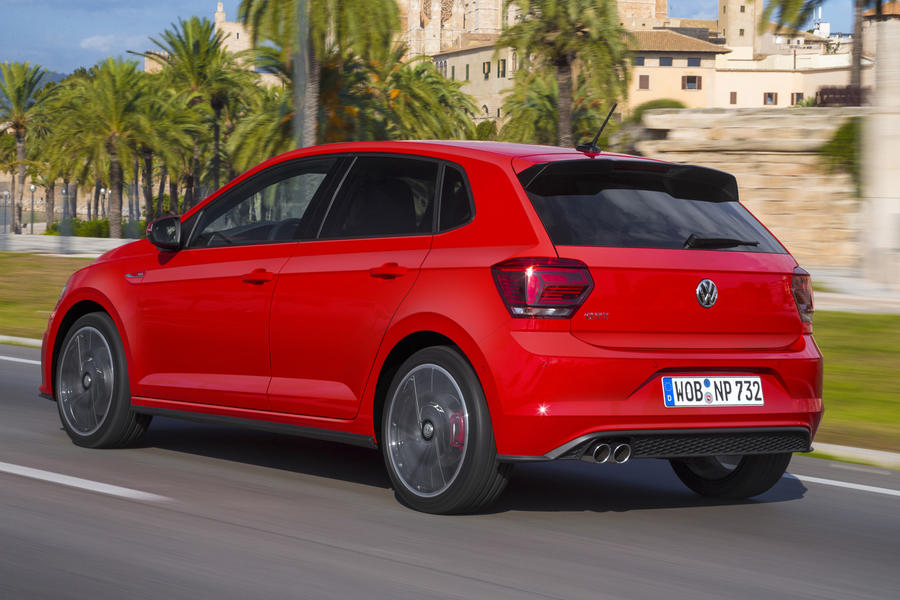 This car’s suspension tune was signed off by the same guy who was responsible for the handling of the remarkable Golf GTI Clubsport S: VW’s head of chassis development, Karsten Schebsdat. If this Polo GTI turns out to be the first one truly worthy of the badge, Karsten is probably be an important reason why. He’s got quite a CV, and it’s worth explaining before we get into the GTI in greater detail, because it speaks volumes about him.

Schebsdat’s career started at Ford in the mid-1990s, where he learned his trade from acknowledged masters such as Richard Parry-Jones and Lotus’s John Miles. The first car he worked on from a clean sheet was the original, epoch-making Focus. When he joined Volkswagen in the early 2000s, it was to help create Wolfsburg’s response to the Focus: the Golf Mk5. And later that decade he moved to Porsche, where he had a hand in every GT-badged version of the pre-facelift 997-generation 911. Apparently, Clarence Seedorf is the only footballer to have won the Champions’ League at three different clubs (thanks Google); he must be the only footballer with a CV to rival Karsten’s, I reckon.

But before we get too carried away, we should remember that Schebstad was creating a GTI, not a Renaultsport RS or a Ford ST, and those three letters have come to stand for a particularly driveable, pragmatic and rounded blend of affordable performance over the past decade or so – and not by accident. So the fact that this new hot Polo isn’t as firm-riding or as pointy and lively in its handling as the last, yobby but brilliant Fiesta ST probably won’t surprise you. That doesn’t mean it’s not a giggle to drive, however, or that it’s missing too much in the way of pace, grip, dynamic purpose or performance flavour. Far from it. It simply means that Volkswagen understands how the majority of GTI owners want to use their cars: every day, for every journey, whatever the road or the weather might throw up – and they don’t really want to be made to suffer for their fun, either.

This is undoubtedly the best GTI-badged driver’s car yet to delivered by Volkswagen outside of the Golf range: a hot hatchback with more credibility than any Polo before it, and a proper GTI – with all that implies in 2017. It’s not a car without room for improvement, mind you – and, while it’s exactly the car that Karsten Schebsdat and his team intended, it might not be the hot supermini to best enliven your weekend driving, either.

For this tester’s money, cars at the affordable end of the hot hatchback spectrum are at their best when they’re a bit less grown-up than this. Driver thrills that are accessible, performance flavour that’s abundant and instant, and handling that’s compelling at real-world-relevant everyday speeds: these are the things that the greatest and most compelling examples do well. And I’m not sure that miniaturising the Golf GTI’s dynamic character, while that trick’s been successfully pulled off here for the very first time, has given us a car that can quite outstrip any of its rivals in those key areas.

I wouldn’t, in short, choose this over a Ford Fiesta ST or a well-specced Mini Cooper S. But then I wouldn’t imagine buying a car like this to be used every day, for every journey, as you would a larger car – or a Golf GTI. And if you would, you’d probably see the appeal.

It would have been quite a coup if Volkswagen had taken on the best in class at their own game and won here, but in fact they’ve brought something new to the fast supermini table that is classy, desirable, practical and rounded enough to wear the GTI badge very comfortably indeed. And it’s no dynamic half-measure, either. 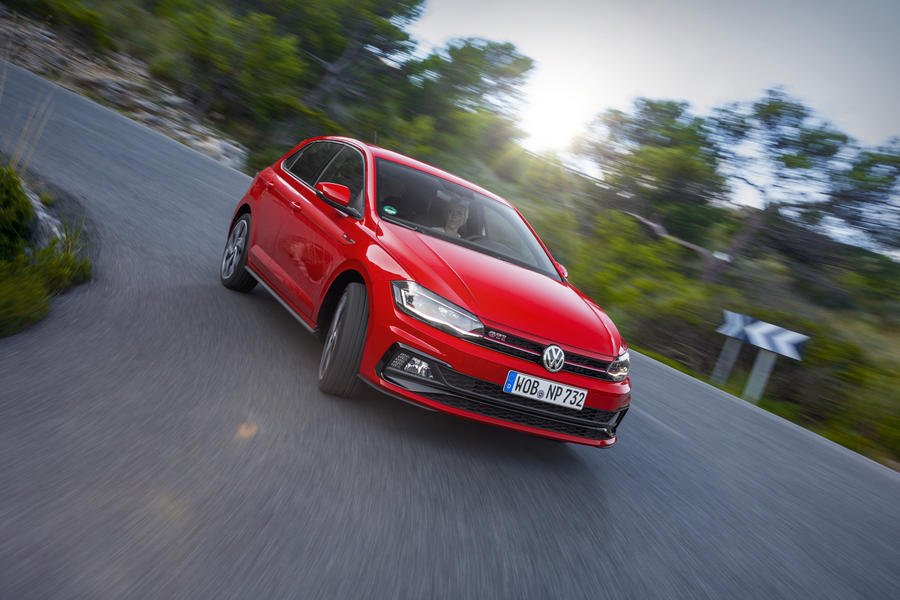 A big improvement in all area's

Over the MK5 Polo which was one of the best cars in its class. Young Polo drivers may now have families but dont want a golf sized car so the increase in size fotr this model makes complete sense. The MK5 polo's boot was a bit tight even though they still managed to fit a full sized spare wheel in the boot recess. This model makes complete sense in how it has evolved and it's a known fact that everything on thge MQB platform ends up being bigger than the previous Gen of VW's.

A friend has a Polo GTI 1.4 twincharge, its been fantastically reliable since it had the new radiator, DSG gearbox and engine.

Totally rubbish engine and concept, I got slated on this very website when I pointed this out.

There's no practical use why anyone would have twin charged engine (and sometimes batteries and electric motors) over a slightly higher capacity engine Turbo'd engine.

"I can't imagine buying a small hot hatch as my only car..." Thanks Matt. I work really hard to be able to afford ONE half decent car. A small hot hatch is perfect for my needs: urban parking, B road commute, long distance at weekends to events. So this could be perfect. I'll leave you to your spoilt Autocar supplied free cars.....
View all comments (21)