BACK TO ALL NEWS
Currently reading: Small Seat EV to spawn Cupra model
UP NEXT
How Max Chilton and the McMurtry Speirling conquered Goodwood

Seat is planning to introduce a smaller EV than the El Born as part of its electrification rollout – and a Cupra model could be on the cards, too.

Talking to Autocar at the Frankfurt motor show, Seat president and Cupra board member Luca de Meo said: “We have to find a solution for a smaller car than the El Born (top right). We have to look at a [electric] solution in the B-segment because a big part of the market is not covered.”

The Spanish brand will be “working with the [Volkswagen] Group” in developing an electric supermini, which will likely form the basis of VW’s planned sub-£18,000 ID model.

It has been previously reported that Seat will lead the development of an entry-level electric car within the VW Group. Seat’s design boss, Alejandro Mesonero, also acknowledged it is “strongly collaborating with Volkswagen and taking responsibility over a small segment [electric] car”, claiming development is “very, very intense”.

Achieving such a price will be helped by using the economies of scale made possible by the MEB platform, which, de Meo confirmed, will “give us an opportunity to redesign the thing” away from the look of the combustion-engined Seat Ibiza. The platform is also used under Cupra’s first bespoke electric SUV, the Tavascan, of which de Meo said he has “already seen” the production version.

The new electric supermini is confirmed as not being part of Seat’s plan for six electric and plug-in hybrid models by 2021, so it is expected that the Peugeot e-208 rival will arrive by 2022. The delay is because the VW Group is prioritising the roll-out of higher-margin electric cars while also allowing for wholesale battery costs to fall in the intervening period.

De Meo claims that a bespoke approach to EV platforms will create a less compromised car with better efficiency, extra space and a more distinctive style than the PSA route of designing a joint petrol/diesel/electric platform.

Although de Meo wouldn’t officially confirm it, a Cupra variant of the small EV is also believed to be in the pipeline. Linking to the discussion of that model, de Meo said: “Our next hot hatch could come without smoke from the exhaust.”

Seat already offers a small EV, the Mii Electric, but it sits in the smaller, city car segment and isn’t a particularly profitable venture, de Meo acknowledged: “Because of the price positioning and because of the battery, those cars are only done for CO2 regulation.” 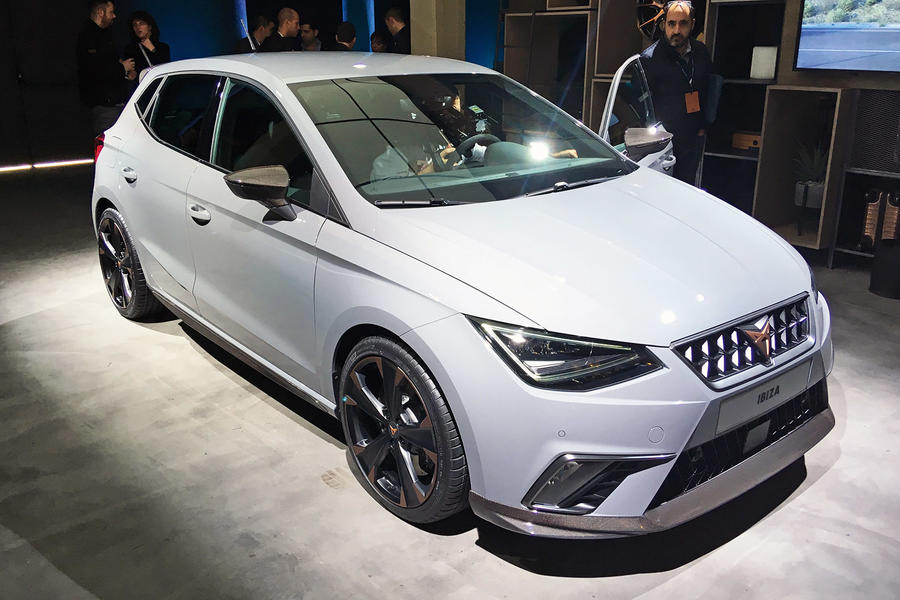 The Cupra Ibiza is officially “dead”. First shown as a concept in 2018, the Ford Fiesta ST rival was tipped for production within a year, but Seat president Luca de Meo has finally confirmed rumours that the decision has been reversed.

He said: “We couldn’t find the technical base to do a really serious contender. More importantly, for the volumes that we see in that segment, we didn’t find the business case – not at all, because this hot hatch market is very specific to a couple of countries.”

Although that contrasts with the idea of a Cupra version of Seat’s EV supermini, the relative ease of uprating the power of a battery electric powertrain combined with being able to design the car with a Cupra version in mind from the outset would, in theory, allow the financial case to stack up better.

Shouldn’t the business case for a hot hatch arrive earlier

There is no big cost difference for an electric drive train with lower power vs. one with higher power. What drives the cost of an electric car is the battery. So shouldn’t the business case for a high performance electric hot hatch actually arrive earlier than the business case for a lower powered one? It’ll probably be easier to find buyers who are willing to pay the higher price for an electric car if it is fast and has a good performance.

There is no big cost difference for an electric drive train with lower power vs. one with higher power. What drives the cost of an electric car is the battery. So shouldn’t the business case for a high performance electric hot hatch actually arrive earlier than the business case for a lower powered one? It’ll probably be easier to find buyers who are willing to pay the higher price for an electric car if it is fast and has a good performance.

In so many words, you also make the arguement for promoting the lower priced BEV, due to the smaller battery, ideal for commuters, stay at homers...volume seller will provide greater overall revenue than higher price faster model. Not everyone...far from it...has performance as the top priority.

I know it's an Autocar rendering but it looks really good. Take a hint Seat. I am curious though how a low cost EV supermini sits with the suggestion yesterday of Seat going premium.

If this has a real world