BACK TO ALL NEWS
Currently reading: New 2020 Cupra Leon to be part of seven-strong line-up
UP NEXT
Skoda to launch electric saloons and estates alongside SUVs

Cupra's range expansion will gather pace in 2020, with a hot version of the next-generation Seat Leon to arrive as part of a seven-strong line-up.

The performance Leon, previously badged as a Seat, will adopt the new branding alongside bespoke styling and badging compared with the regular Leon, due to be revealed later this year.

A disguised prototype of the Cupra Leon has been seen testing in Germany. Key details that mark it out from the standard family hatch include twin exhaust tailpipes, a lower ride height, bigger air intakes and sporting wheels.

Details of the car's powertrain remain under wraps, but we don't expect the 2.0-litre turbocharged engine to go beyond the 306bhp offered by the current hottest model, the sold-out Leon Cupra R. Four-wheel drive may be offered as standard given the power output, but lesser-powered, cheaper front-wheel-drive variants could also be introduced.

The Seat sub-brand revealed the Formentor coupé-crossover earlier this year, the first model developed primarily as a Cupra. It's due to go on sale in early 2020. That model joins the Cupra Ateca, along with the Seat Leon Cupra, which was launched before Cupra was spun off into its own brand. 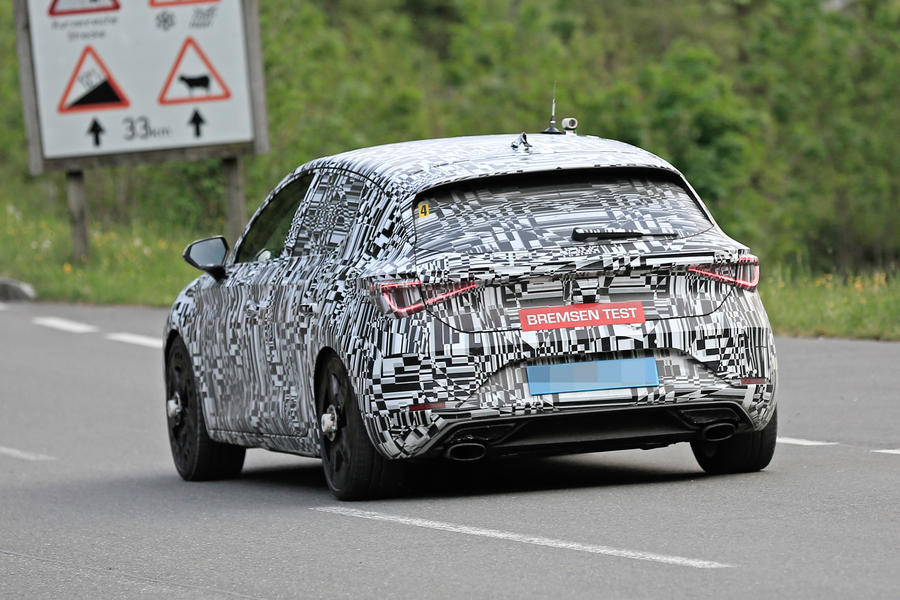 Asked about Cupra’s future plans, marketing boss Khaled Soussi said: “We are working on our product strategy, but I can confirm that by the end of 2020, we’ll have seven cars, including special models, on the streets.”

According to Soussi, the ‘special models’ include special editions and ‘halo’ cars.

Soussi reaffirmed that the current Leon Cupra will continue to carry a Seat badge, but he said: “With the next generation of Leon, we will have a Leon with a Cupra logo. All our cars from now will have a Cupra logo.”

Soussi said decisions over whether Seat models would gain a Cupra-branded version would be made on “a case-by-case basis”.

He added: “We are looking at every single car and we are assessing the potential of the car and taking into consideration target customers we want to reach.” Soussi also said no decision had been made about whether Seat could launch its own version of the Formentor.

“The Formentor is a car developed specially for Cupra. But we work in the same group and look for synergies for both brands. But at this stage, presenting the first Cupra car, we’re not yet there to think about whether we make a Seat version of this.”

Nicely worked out, believe they have proved their point.

Is this going to be the VW

Or maybe VW themselves?

I think I'm the only one who liked the Toledo too, even though it was just a badge engineered Rapid.

I assumed he was suggesting its a new brand that no one will understand, or buy

To be honest, this is what it comes over as, do we need another SUV?, what’s going to different about Seats Car?.....

To be honest, this is what it comes over as, do we need another SUV?, what’s going to different about Seats Car?.....

Who is the "we" you represent?. Why should there be less choice, no matter that you feel there is too much choice?. Let the serious car buying public decide if this model is a winner, when it becomes available and try not to be so negative, at this very early stage.