BACK TO ALL NEWS
Currently reading: Pininfarina Battista: how Formula E is readying buyers for 1900bhp EV
UP NEXT
Renault Scenic returns as radical EV with hydrogen range extender

When was the last time you failed to wrap your head around an unbelievable performance statistic? Or, have you become so accustomed to reading silly numbers that it’s now rare for anything to make you stop and think? Personally, not since discovering that the McLaren F1 could hit 60mph in 3.2sec – a surreal time recorded by this magazine in 1994 – have I struggled for words.

That was, at least, until a moment ago, when 37-year-old German engineer Réne Wollmann explained that the Battista – yet another eye-wateringly expensive entry on the rapidly lengthening ‘hypercar’ roster, with deliveries due in 2020 – will almost halve the legendary McLaren’s sprint time, courtesy of 1900bhp and 1700lb ft from four electric motors.

Admittedly, an FIA World Rallycross Audi A1 will do the same, but this is where the truly mind-bending stat comes in. Here it is: stamp on the accelerator pedal at 80mph and the Battista will accumulate speed at the same rate as a Tesla Model S P100D does when launched from standstill. The American car, remember, reaches 60mph in 2.5 seconds. In fact, it’s so pulverisingly quick in ‘Ludicrous’ mode that footage of passengers attempting to suppress laughter, tears and possibly other bodily fluids has become a YouTube phenomenon. Presumably, the Battista will demolish it for straight-line pace, despite weighing more than two tonnes.

It’s hard to imagine how that sort of paradigm-shifting acceleration will feel. Multi-millionaire collectors who nowadays don’t open their wallets for less than 700bhp won’t have experienced anything like it either, which is why – so the official line goes – Pininfarina is running pre-delivery workshops like the one Autocar is attending at the Circuit de Calafat. 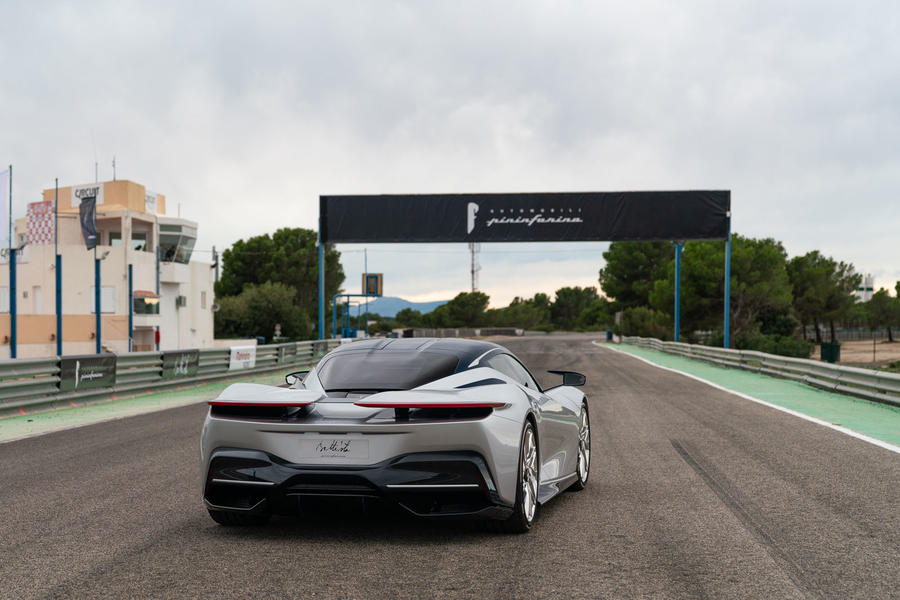 This a tight, technical track that sits on the Spanish coastline an hour’s drive south of Barcelona, and one that Mahindra Racing uses to develop its Formula E cars – Mahindra being the Indian car-making giant that bought a controlling stake in the world’s most famous coachbuilder in 2015. It is now refashioning Pininfarina as a maker of luxurious electric cars with a calling card of extraordinary speed. The product pipeline includes more practical vehicles, but similar to the strategy that Tesla initiated with the original Roadster in 2008, the brand is starting in the headline-grabbing, uppermost echelon of the sports car market. The Battista, which is to be constructed almost entirely of carbon fibre, and with cabin opulence comparable to a Bugatti, will cost around £2million. And, frankly, a Formula E car, or anything else the sensible side of a Top Fuel dragster, wouldn’t see which way it went.

So far roughly 50 six-figure deposits have been taken, securing one third of the total production run. Given that this car is something of a step into the unknown, both for manufacturer and buyers, that’s an encouraging figure. At Calafat, owners-to-be and others who are still sitting on the fence get to meet the engineers and designers, can have a closer look at a rolling chassis (due to receive its full 1900bhp running gear in March) and, of course, drive the Formula E car.

It’s also a chance for us to catch up with a project that is a bellwether for the future of performance cars. So far, electric supercars have done little to dispel the notion that they exist as one-trick ponies that are obsessed with lung-crushing acceleration. The Battista would appear to be no different, but if such a historied brand, with engineers of the calibre that Automobili Pininfarina now has on its books, can’t make driving this thing simple fun – and engaging on a level removed from the thrill of naked speed – perhaps it really is time for us to start worrying.

In the last year, Pininfarina’s new technical headquarters in Munich has swelled from just six to more than 100 personnel. The original premises in Cambiano, Turin, are still operational and the cars will be assembled in Italy, but Munich has been crucial for recruitment. How crucial? The last entry on chief engineer Wollmann’s curriculum vitae reads ‘Head of Mercedes-AMG Project One’, which is the road-legal incarnation of Lewis Hamilton’s F1 wheels. Senior technical advisor Peter Tutzer played an integral role in developing both the Pagani Zonda and Bugatti Veyron, while chief technical officer Christian Jung helped implement Porsche’s Mission E – the ambitious project that led to the electric Taycan. Chassis engineer Giulio Morsone then comes fresh from developing the Ferrari Portofino. 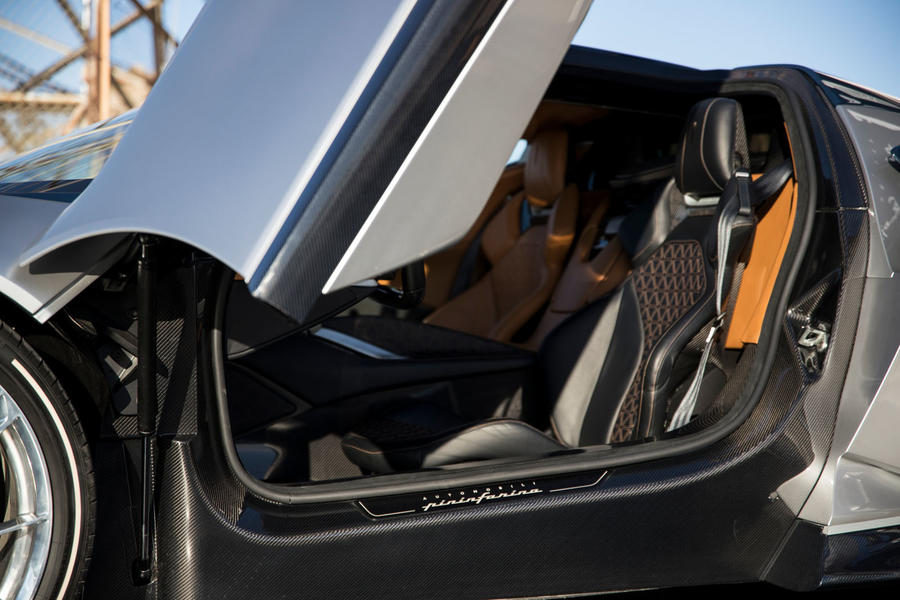 What they and others have to work with is a carbon monocoque, to which the car's aluminium double-wishbone suspension is directly mounted. This, along with the four-wheel-drive powertrain, is supplied by the part Porsche-owned Croatian start-up Rimac, whose Concept_Two will bear a strong technical resemblance to its Pininfarina cousin, only with a more track-oriented setup. The Italian car is intended as a much more fluid-riding grand tourer, with softer spring rates and, per the latest simulations, a default torque split of 35:65 front to rear. Despite its mid-engined shape and frightening pace, there should be something aristocratic about the Battista, and on the subject of Nordschleife simulation laps, Wollman admits there have been some, “but only for performance reasons and cooling predictions; we don’t want to go into that game”.

“We’re not going for a track weapon, this is clear,” says Nick Heidfeld, echoing Wollmann. The former F1 driver will advise on the dynamic development for the Battista and a brief chat with him inside one of Calafat’s pit garages yields encouraging snippets. “The best steering I’ve ever experienced was in a McLaren 570S,” he says, though he admits that aiming for such rich tactility and actually achieving it are two different things. Still, it’s an admirable goal. A dedicated rear-wheel-drive mode that takes the smaller electric motors on the front axle offline would add another dimension to the driving experience and still leave the car with an adequate 1200bhp, and is a feature that Heidfeld is extremely keen to implement. Wollmann, though, says that he cannot understand why, if you are not at full steering lock and there is traction left in the tyres, you wouldn’t use the additional power for even more acceleration and agility.

It’s an intriguing insight, and, with the complexities of torque vectoring, regenerative braking and the overarching need to safely contain unprecedented road-car performance, there will be further ideological predicaments during the car’s development. We’ll find out first-hand whether the Battista is a mould-breaking electric drivers’ car or merely another statistical marvel some time next year. 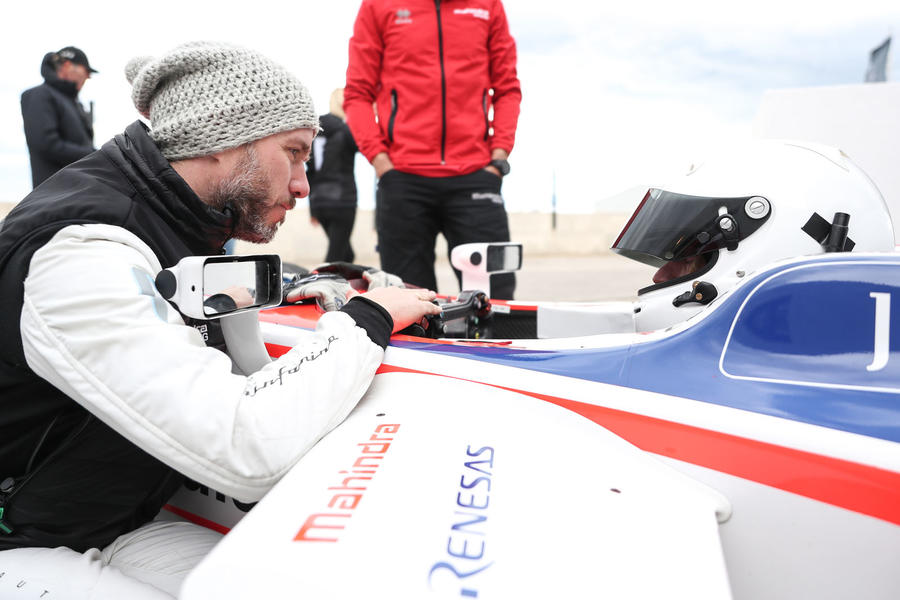 It’s doubtful that Ferrari would even consider allowing deposit-holders for even the SF90 Stradale to drive an actual Scuderia F1 car, but Mahindra ownership means Pininfarina can offer something to similar effect. Admittedly, a generation-one Formula E car with the wick turned down to hot-hatch power levels poses somewhat less of a health-and-safety headache for event planners than a 900bhp hybrid F1 missile, but it’s still a rare opportunity to drive an FIA single-seater at the top of its particular tree.

So how does it feel? Surprisingly pure, in short. There’s no power-steering, traction-control or anti-lock brakes, and with so little steering lock and road-spec tyres that are easily overwhelmed by the torque, the cars are primed to spin. It’s a characteristic that's exacerbated by the lack of powertrain noise. When the rear axle begins to slide in a combustion-engined car, there’s an immediate flare of revs as the tyres over-rotate. As an audible signal, this can be just as useful in communicating what’s happening beneath you as the synapses in your backside, but it’s missing in this 2018-spec Mahindra M4 Electro and every other Formula E car. Also, for our short stint at Calafat circuit, and as is the custom at any event in the series, there’s not a single tyre-warmer to be found in the pit-garage, so extra care is required.

As for the link between Formula E and the Battista, beyond the marketing opportunities it’s tenuous, with battery management and aerodynamics the principle areas of crossover. Ultimately, the road car will be a far quicker, more complex and capable device. 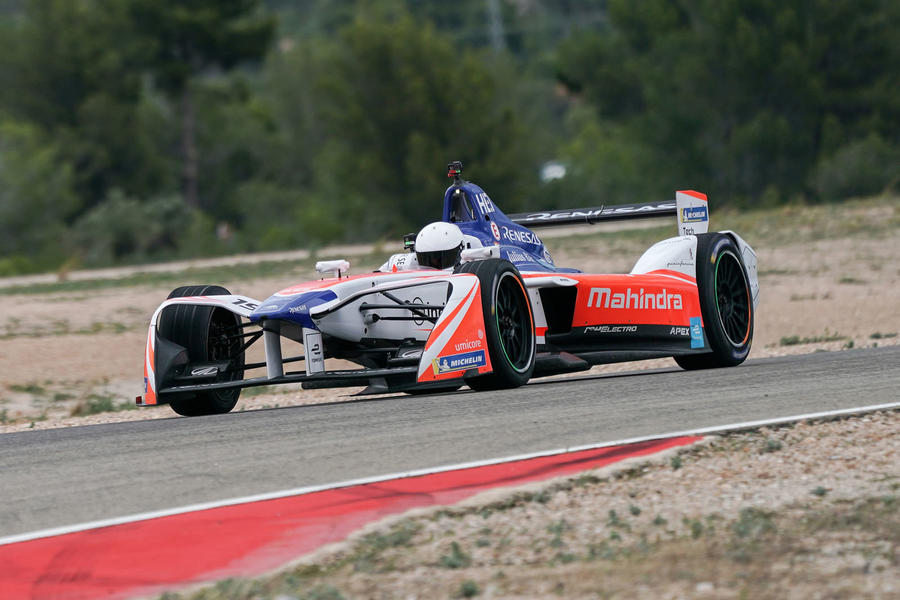 The greatest cars by Pininfarina

A while back the problem was getting Tyres to handle all this torque, the 200mph+ speeds, what's happened in Tyre development to change this?, nobody seems interested to find out?