BACK TO ALL NEWS
Currently reading: SF90 Stradale hybrid is most powerful Ferrari road car yet
UP NEXT
Why now is the time to buy a proper high-mileage hero

Plug-in hybrid packs 986bhp, courtesy of a V8 and three electric motors, and is faster than the LaFerrari around Fiorano
Open gallery
Close

Ferrari has unveiled the most powerful, most advanced and fastest-accelerating road car it has ever produced: the SF90 Stradale.

Described as a “milestone in Ferrari’s history” by CEO Louis Camilleri, the new flagship model is also the first series-production plug-in hybrid Ferrari. It's the second of five new models to be presented this year - an “unprecedented” product rollout, according to the Italian firm.

“2019 is the year in which we have decided to significantly increase our product portfolio,” said Camilleri. "This [car] is the first step in a direction that Ferrari will enter in unwavering focus and confidence”. 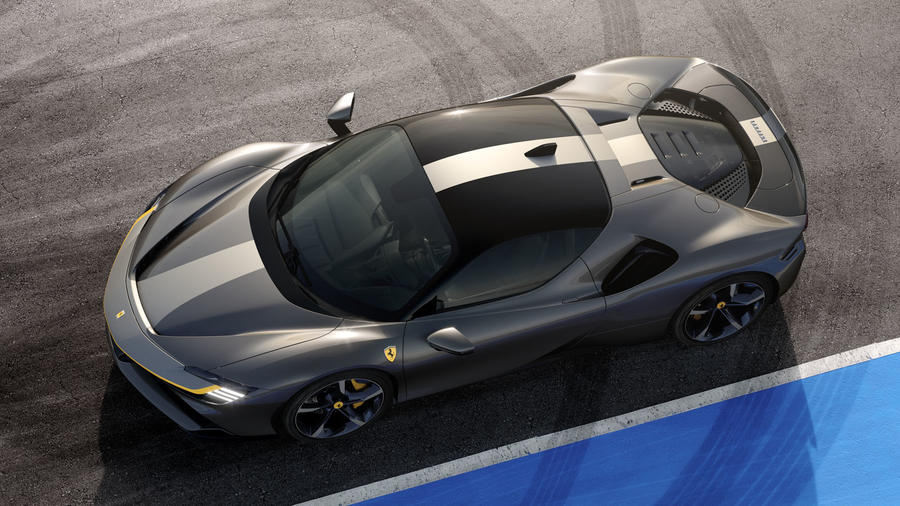 Dubbed Project 173 during development, the production name is taken from the firm’s 2019 Formula 1 car and in turn references 90 years since Scuderia Ferrari was founded. Unlike with the LaFerrari, production is limited only to the amount the firm can sell, with 2000 customers from around the world lined up to see it tonight.

The most significant number for the SF90 Stradale is 1000. That's the total horsepower figure (986bhp) that the petrol-electric powertrain makes: 36bhp more than the LaFerrari's and the most of any roadgoing Ferrari ever built.

The heart of the car is Ferrari’s award-winning ‘F154’ twin-turbocharged V8, bored out from the 3902cc of the 488 Pista to 3990cc. Engineers claim a complete redesign, including new combustion, intake and exhaust systems, while a narrow cylinder head, with a Ferrari V8 first in a new 350-bar direct injection system, features.

The resulting output of the engine alone is 769bhp, with 590lb ft of torque at 6000rpm. The new engine design, in which the turbocharger is mounted lower and the flywheel is smaller, results in a lower centre of gravity. The exhaust system also makes use of the super-alloy Inconel instead of steel to save weight, while Ferrari claims a “fuller, richer” sound. 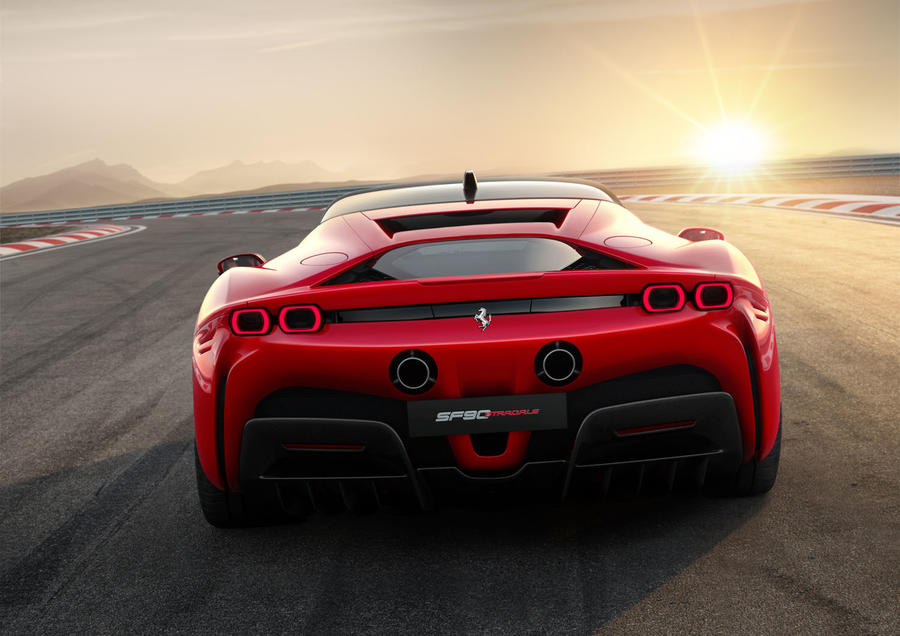 Complementing the V8 is a trio of electric motors - two mounted at the front and one mounted at the rear between the engine and gearbox, giving all-wheel drive. All three generate a total of 217bhp to make the 986bhp total. They are powered by a relatively small (7.9kWh) lithium ion battery pack that makes the SF90 Stradale capable of 16 miles of electric-only running at speeds of up to 84mph. The battery can be charged either by plugging it in (no charging time has been revealed) or using the engine as a generator.

The two power systems channel through a newly developed eight-speed dual-clutch automatic gearbox. It’s lighter and more compact than the outgoing seven-speed unit and promises an 8% reduction in fuel consumption in normal driving on the WLTP cycle. Shifts are also claimed to be 30% faster. The advancements also extend to the brakes, with Ferrari recording a 100-0mph stopping distance 2m shorter than the LaFerrari.

All of this results a 0-62mph time of 2.5sec - a record for a roadgoing Ferrari. Furthermore, 0-124mph takes 6.7sec, while the top speed (claimed not to be the main performance focus) is 212mph. Ferrari also says the new car pulls out a 64-metre lead from the LaFerrari in one lap around its Fiorano test track.

A new power mode selector, dubbed eManettino, can be cycled through four driving modes. eDrive keeps the engine switched off for as long as the battery lasts, while Hybrid is the default setting, balancing both power sources; Performance keeps the engine running to ensure the battery is fully charged and Qualify allows maximum electric motor power for a certain time period to deliver all-out performance. 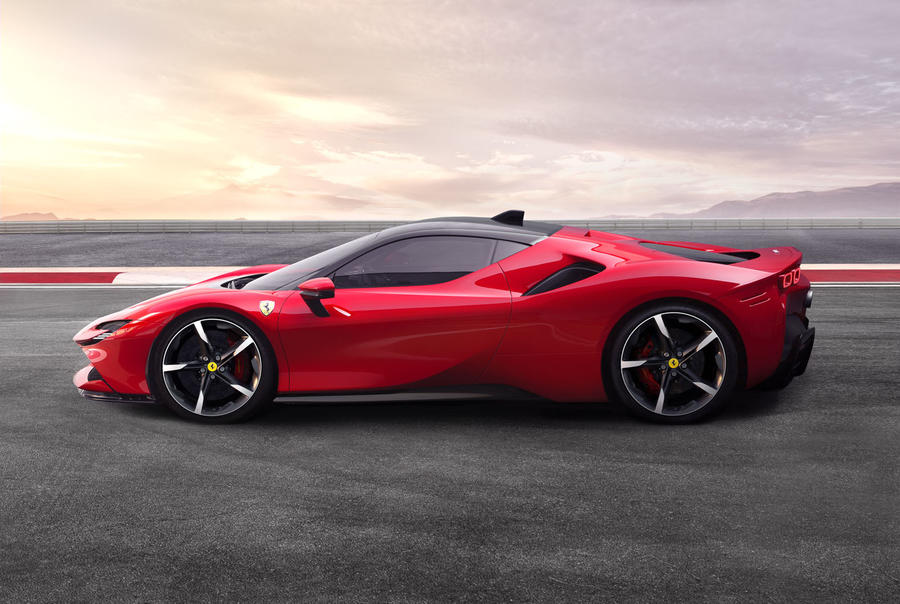 The SF90 Stradale sits on a newly developed platform. Ferrari’s first series-production multi-material chassis, it makes use of aluminium and carbonfibre. The result is a dry weight of 1570kg, still around 315kg more than the LaFerrari, which uses a full carbon tub.

The use of high-strength alloys allows Ferrari to claim 40% higher torsional rigidity than for previous platforms, improving dynamic performance and reducing noise, vibration and harshness levels.

Extensive work on integrating the new power systems has resulted in a new Electronic Slide Slip Control (eSSC) system. This brings a special traction control system that's designed to distribute both engine and electric motor power to the individual wheels that require it.

The SF90 Stradale also features a new brake-by-wire control system that allows braking torque to be split between the hydraulic system and electric motors, whereas the traditional hydraulic braking system is used only to support the electric regeneration under hard braking. Ferrari has also introduced a torque vectoring system on the front axle to manage traction on the inside and outside wheels. 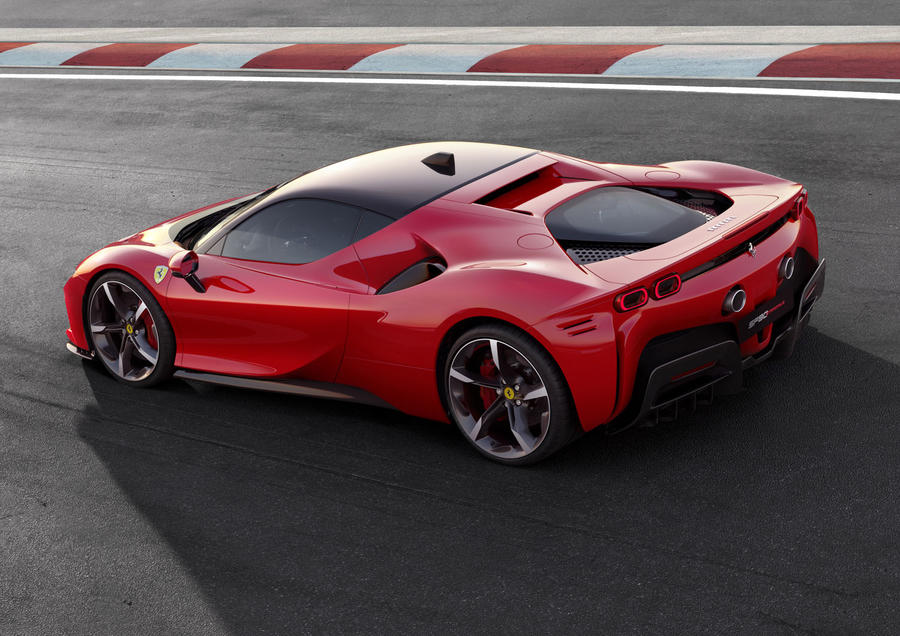 Ferrari claims the combination of these systems allows “a whole series of solutions to boost the SF90 Stradale’s lap times, while simultaneously guaranteeing that drivers of all kinds could make full use of the car’s potential and have fun behind the wheel”.

Described as “quite a long and complex job” by Ferrari's director of design, Flavio Manzoni, the SF90 Stradale’s exterior is designed to provide the optimum balance between maintaining the style, heritage and proportions of classic Ferraris and employing advanced aerodynamics.

Two bodystyles are available on the SF90 Stradale: the standard one and the Assetto Fiorano package, which is aimed at forgoing some comfort in the name of offering better track pace. It features a taller rear spoiler for increased downforce, a more stripped-out interior and bespoke carbonfibre detailing, resulting in a weight reduction of 30kg. It also gets Michelin Cup 2 tyres with a bespoke compound instead of the Pirelli P Zero tyres of the standard car.

The SF90 Stradale's shorter overhangs - including a rear one that’s shorter than the front - have created a cab-forward layout that's said to emphasise the mid-engined look and feel. The cabin area is 20mm lower than on previous Ferraris and bubble-shaped with larger rear flying buttresses - a classic Ferrari cue. Slim C-shape headlights are integrated into the brake air intakes and use matrix LED technology, while the tail-pipes are centrally mounted and higher than ever before. 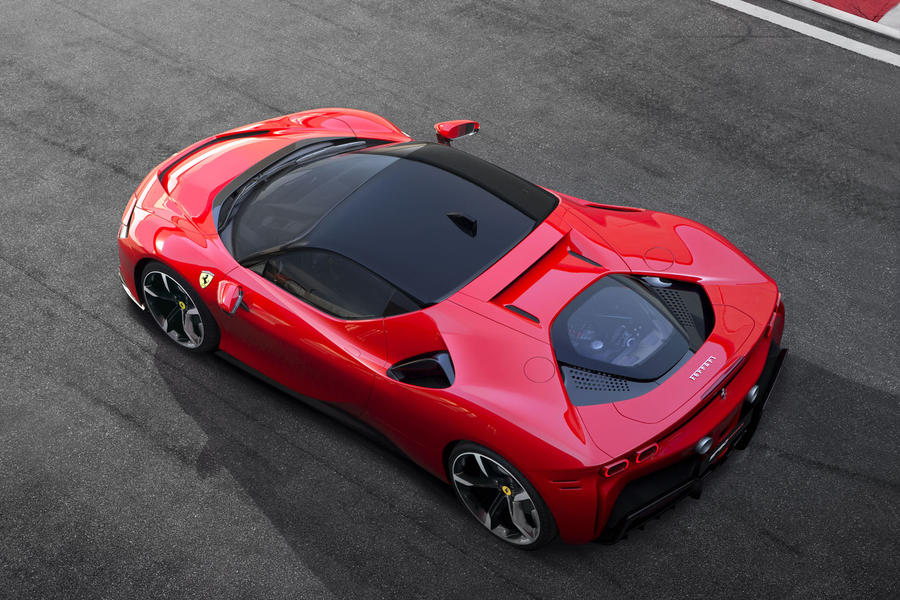 Ferrari claims the SF90 Stradale is “the new benchmark for downforce and efficiency in high-performance road cars”. The headline figure is 390kg of downforce generated at 155mph - 30kg more than the LaFerrari.

The stand-out bodywork element features as part of the rear wing. Dubbed the ‘shut-off Gurney’, it’s a mobile section of the spoiler that in high-downforce conditions is lowered towards the body to create a new tail geometry, or raised up when low drag is needed for straight-line speed. A complex system of vortex generators and two front diffusers ensure airflow from the front to the rear is optimised.

As with the rest of the car, the SF90 Stradale’s interior is totally new. Even entering it is a different process, with a new keyless entry system incorporating a key shaped and styled like the Ferrari logo and doors that open via push buttons from the inside.

The dashboard is dominated by a completely new interface and a 16in curved digital instrument cluster. All car functions and infotainment are controlled through this, with only a handful of touch-sensitive icons either side of the wheel for climate and driving assistance functions.

A head-up display also features for the first time, but it’s the new steering wheel that's most significant. Ferrari claims 80% of the car’s functions can be controlled from here, citing that “eyes on the road, hands on the wheel” was a key safety motivation during development.

Despite the technological advances, a few classic touches still remain, including the gear selections built into an ‘H-gate’-style metal gear lever. 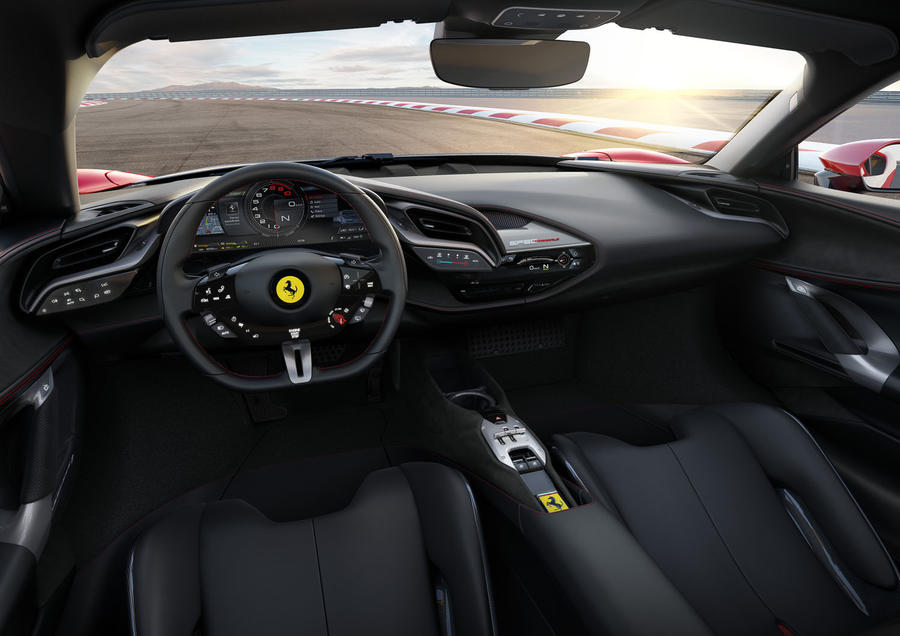 Ferrari is remaining coy about the exact pricing figure for the SF90 Stradale, claiming it will be revealed next week once customer feedback is gathered.

However, chief marketing and commercial officer Enrico Galliera did reveal that the new car will cost “less than a La Ferrari but more than an 812 Superfast”. Rumours suggest a price tag somewhere between £500,000 and £750,000.

The car is a series production model, with Galleria claiming that of the 2000 customers who are invited to see the car tonight, “most have already ordered one. Anyone who orders now will have a long wait”. Around 60% of customers are expected to already own at least one Ferrari.

The first deliveries are tipped to begin in Italy in the first quarter of 2020, with all customers globally receiving their cars by the summer.

It lacks just one thing for

It lacks just one thing for such a car : it has to be autonomous.

Relatively decent design in the current Ferrari, but ...

Come on (VW) Porsche! You've been kicked!
View all comments (21)