BACK TO ALL NEWS
Currently reading: New Skoda Kamiq crossover priced from £17,700
UP NEXT
Fisker goes radical with Pear EV SUV

The Skoda Kamiq, revealed at Geneva motor show and on roads this November, will be priced from £17,700.

The smallest SUV in Skoda’s line-up, the Kamiq range comprises four trim levels, S, SE, SE L and Monte Carlo, the latter of which will become available later this year. Of the three trims available to order now, prices range from £17,700 to £25,130. The Kamiq's key rival, the new Nissan Juke, starts from £17,395.

The Juke rival, first shown at the Geneva show, is smaller than its Skoda Karoq and Skoda Kodiaq siblings. The Kamiq is based on the Vision X concept shown at last year's Geneva show and is the first Skoda to show the influence of new design chief Oliver Stefani.

While it takes styling cues from both the Karoq and Kodiaq to ensure a 'family' resemblance between Skoda's SUV offerings, the Kamiq has several distinctive features, including a more upright grille and optional narrow LED running lights. The latter feature animated ‘dynamic’ indicators and sit above the main headlights. As with the new Skoda Scala, the boot displays the Skoda name in letters, instead of the firm's logo. 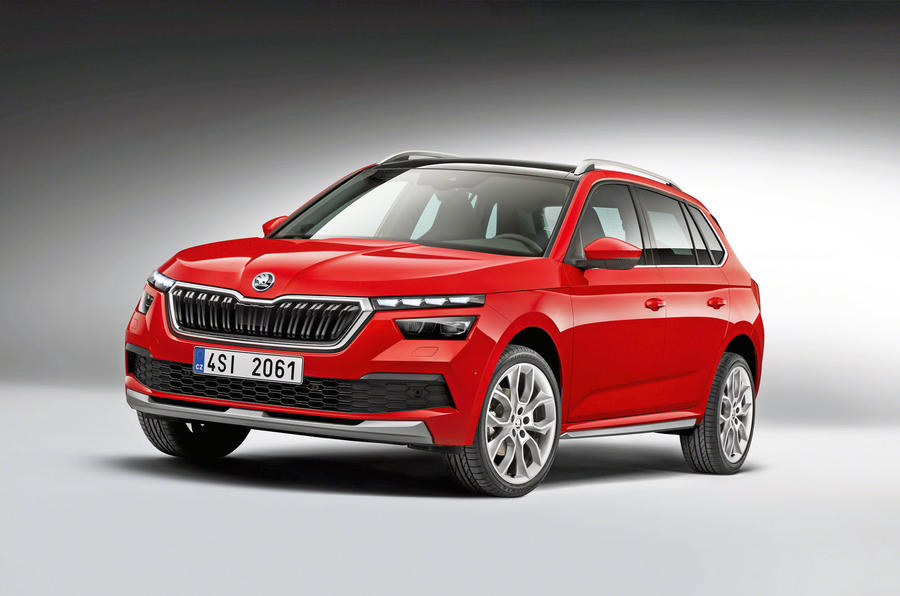 The Kamiq will be offered with front-wheel drive only. Although aimed primarily at a family market in urban areas, it will deliver “sporty” handling, according to project manager Emil Nikolov. The Kamiq is available with optional Sport Chassis Control, which makes the car sit 10mm lower than standard and uses adjustable shock absorbers.

Three petrol engines and one diesel are offered in the UK. There are two 1.0 TSI petrol options, with 94bhp and 113bhp respectively; and a 1.5 TSI petrol with 148bhp. The diesel offering is a 1.6 TDI with 113bhp. In certain European markets, a CNG powertrain will be offered, although this option won't come to the UK.

There is a choice of a six-speed manual or a seven-speed dual-clutch gearbox. 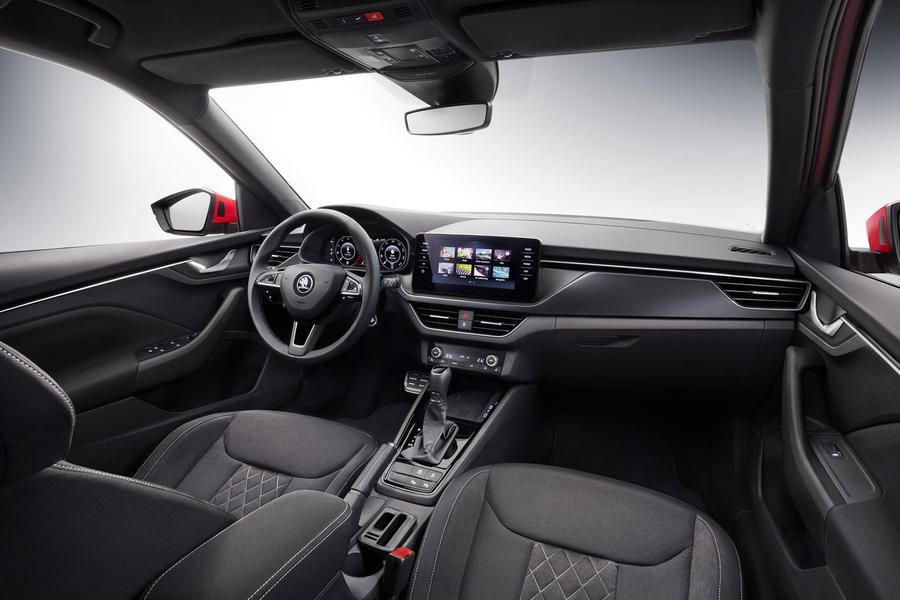 The Kamiq is built on the Volkswagen Group MQB A0 platform used by the Seat Arona and Volkswagen T-Cross but has more interior space than both.

The new compact SUV is 4241mm long with a wheelbase of 2651mm, both of which are 85mm longer than the Arona. That also makes the Kamiq 106mm longer than the Juke, with a 121mm-longer wheelbase. Skoda says extending the wheelbase has allowed it to maximise interior space; the firm claims that the Kamiq has more rear leg room than in the Skoda Octavia and Karoq. 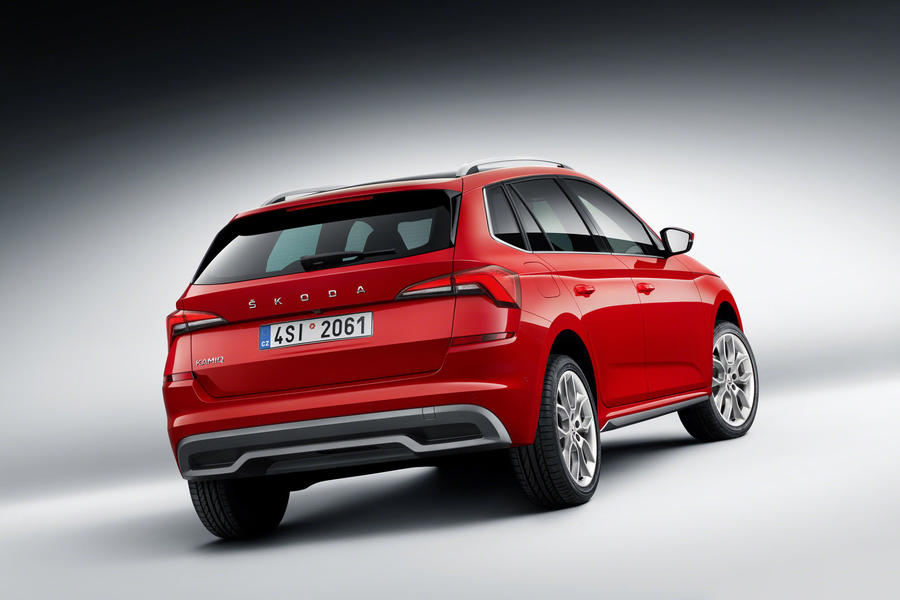 It has a boot capacity of 400 litres, identical to the Arona's and 46 litres bigger than the Juke's. The Kamiq's boot can be accessed using an electric tailgate and expands to 1395 litres with the rear seats folder.

The interior features a similar layout to the recently launched Scala, including the option of a 9.2in free-standing infotainment touchscreen that sits above a hand-rest 'shelf' and an optional 10.25in virtual cockpit. The air vents have been pushed to the side of the dashboard in a bid to increase space and ambient lighting is offered in three colours. Options include heated front and rear seats. Skoda claims more than 20 of its 'Simply Clever' features are available, including a removable LED torch in the boot.

The Kamiq will be offered with a permanent internet connection and a number of connected features, such as remote vehicle access via an app. The car comes with Front Assist and Lane Assist as standard, with optional safety features that include Park Assist, Rear Traffic Alert and a rear-view camera. 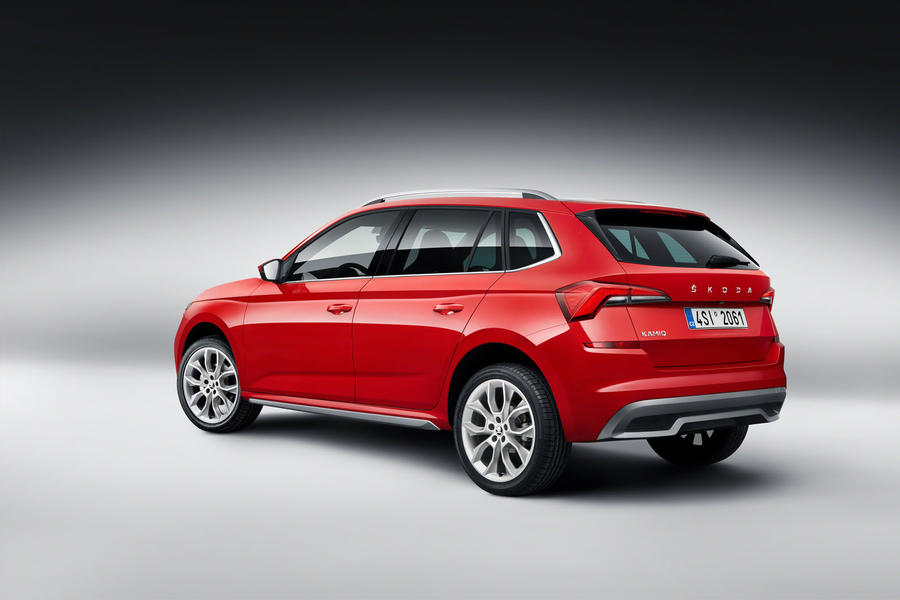 The Kamiq is unrelated to the Chinese-market SUV with the same Kamiq name. That machine is larger and built on an older platform, but Skoda has used the same name because they are the smallest SUVs it offers in each market. As with the Karoq and Kodiaq, the Kamiq name is based on a word from the Inuit language. It "embodied something in which you can feel comfortable in any situation and that has its own character," according to Skoda sales boss Alain Favey.

A supemini on stilts for almost £18K!

No wonder people aren't buying as many new cars any more.

The worst thing about this

Will be the way Skoda's "marketeers" will patronise the buying public by trying to make out that this is something original / left of centre / interesting - ref. Paloma Faith "I've Gotta Be Me" etc.

In truth, it's just the same as everything else - only late to the party and lacking any flair whatsoever. But perhaps that what all those "individuals" want.

Oh, BTW I had a new-shape Superb Estate for a year recently and loved it.

Goes with the overall unappealing design I guess...