BACK TO ALL NEWS
Currently reading: New Nissan Juke is bigger, cleaner, more 'grown up'
UP NEXT
Lamborghini to launch four-seat EV crossover and electric Urus

Second generation of the compact crossover reinvents the formula with a new platform, engine and interior
Open gallery
Close

Nissan has revealed the second-generation Juke, claiming that the trendsetting compact crossover has “grown up”, with improved performance and practicality.

The new model was unveiled at events in five European cities and is available to order now in the UK, priced from £17,395.

The original Juke was launched in 2010 and Nissan has sold nearly one million examples since then, but having effectively founded the compact crossover class, it has come face to face with increased competition from a glut of new arrivals. 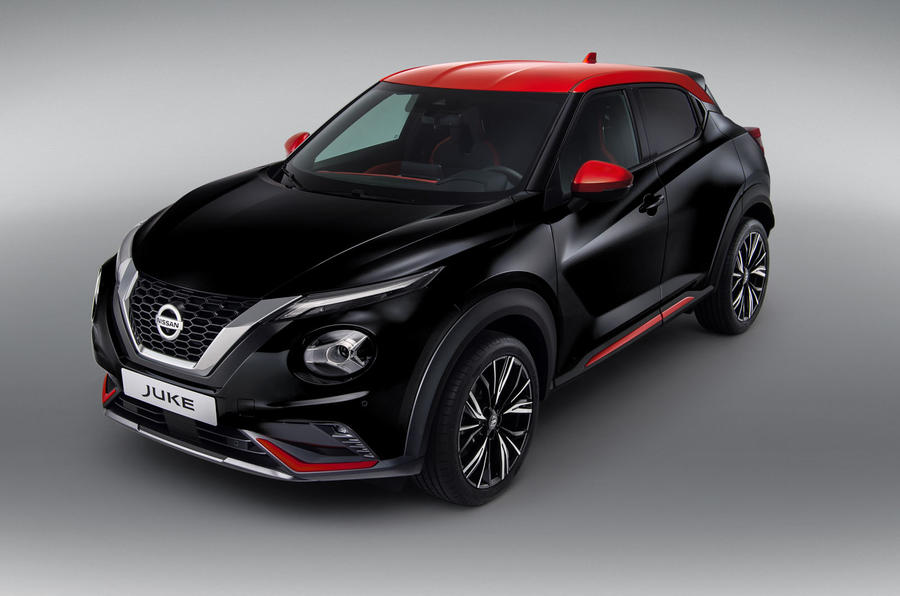 The Juke has received a thorough makeover for its second generation, with sharper lines and a bold new grille, but it retains some of the original model’s defining features, including large round headlights underneath thin daytime running lights. It maintains the ‘floating’ coupé-style roof design and sits on 19in alloy wheels for higher-spec versions, a first for the Juke.

Ponz Pandikuthira, Nissan Europe’s product planning chief, said that although the Juke has “grown up”, it has been developed to offer improved performance and will still retain “the fun-to-drive qualities that have always made it stand out”. 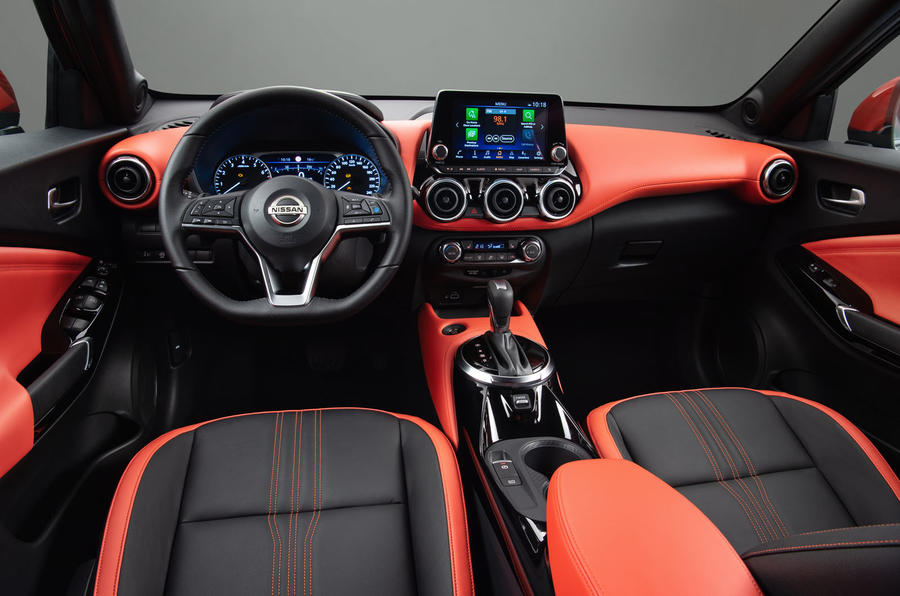 The new model is now built on the Renault-Nissan-Mitsubishi Alliance’s CMF-B platform, which is also used for the new Renault Captur and Clio. As a result, the new Juke measures 4210mm long, 1595mm tall and 1800mm wide, making it 85mm longer and 170mm wider than the previous model, but 30mm lower. The wheelbase is also 105mm longer than previously.

Despite the increased size, extra use of high-strength steel in the new platform has helped make the machine 23kg lighter than its predecessor. Nissan claims the new platform is more rigid and “offers better stability, performance and cornering capabilities”.

Nissan says knee room in the rear has been extended by 58mm and the boot is 422 litres, substantially up from the 354 litres of the previous model, and only 8 litres less than the Qashqai's luggage space. To aid the focus on interior comfort, ‘monoform’ seats – like those in the latest Qashqai – are standard and can be optioned with Alcantara or leather upholstery.

The new Juke will be launched with a single engine choice: a 1.0-litre three-cylinder turbo, offering 115bhp and taken from the Nissan Micra. It will be available with a six-speed manual or seven-speed automatic.

The firm remains coy on future engine plans, but development boss Matthew Ewing said it is “evaluating options for extending the powertrain lineup.” Ewing did, however, confirm no diesel engines would be offered. "For expected Juke users, the 1.0-litre powertrain has a good balance of performance and economy," he commented.

Alongside the 1.0-litre petrol, expect a higher-powered 1.5-litre petrol and eventually a Nismo, which would likely outperform the current generation’s 198bhp.

Given the new Captur is gaining a plug-in hybrid model, an electrified powertrain could also reach the new Juke at some point.

Ewing confirmed the platform had not been developed for a pure electric powertrain, adding that Nissan did not yet know if a third-generation Juke would offer a zero-emission model. Nissan may choose to only offer electric in standalone models as it currently does with the Leaf. 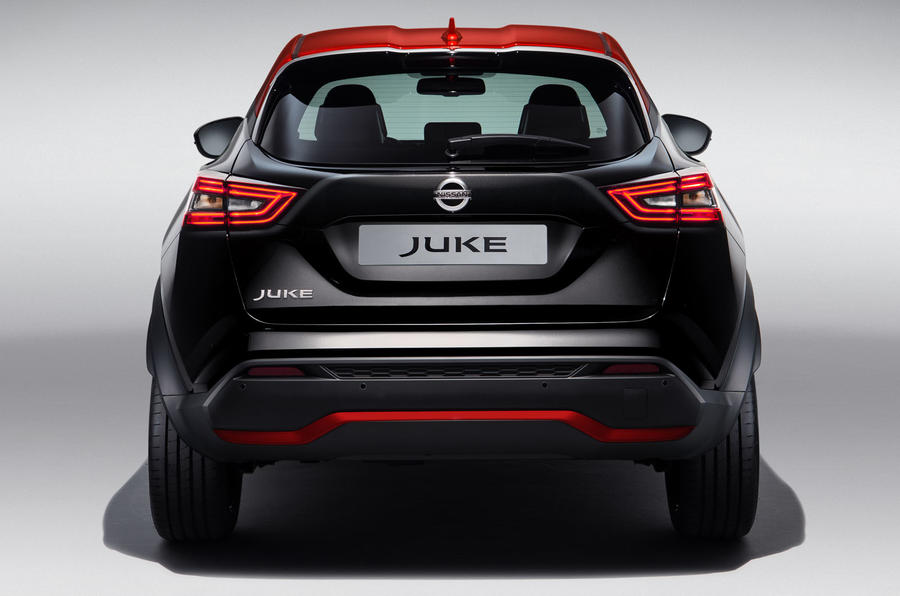 For the first time, the Juke will be offered with the latest version of Nissan’s ProPilot driver assistance systems, including steering and braking assist. It will also be available with the most recent version of the NissanConnect infotainment system, which uses an 8.0in touchscreen and is compatible with Apple CarPlay and Android Auto. The audio set-up can be upgraded with an eight-speaker Bose sound system.

The maker describes the new Juke as the "most connected Nissan yet" with features including over-the-air updates, wifi (with monthly fee) and remote locking plus the ability to check the health of your car via an app.

The Juke will be offered in five trim levels, with entry-level Visia models costing from £17,395 and range-topping Tekna+ costing £23,895.

Buyers who opt for Tekna+ trim will be able to choose from multiple colour combinations for the body, roof and interior upholstery, along with customisable bumpers and side sills. 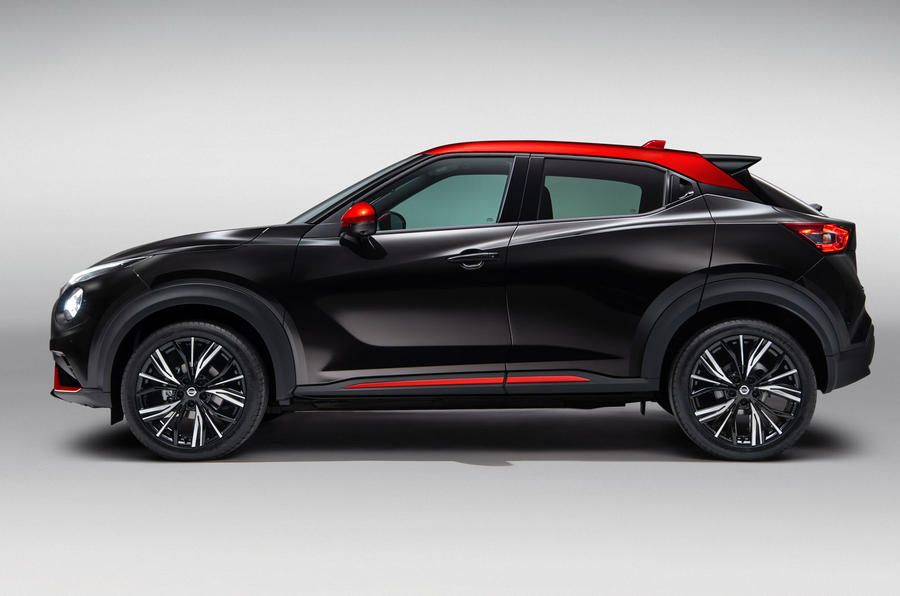 The launch line-up will also include a limited-run Premiere Edition. It’s based on the Tekna+ trim level and just 140 examples will be offered in the UK, priced from £23,995.

The Juke will continue to be built at Nissan’s Sunderland plant and first deliveries are expected in November.

I was not a great fan of the old Juke, but Nissan seem to have done a good job with the new one. Still very recognisable with much improved styling. Should be good news for the people of Sunderland employed to build the vehicle.

I hated the first Juke but this one seems to look vastly better despite still being recognisable as as a Juke. Shame they're only offering a 1.0 and not a Nismo model though.

I saw a video review of a white model with a black and white interior that although not very practical for keeping clean, looked fantastic.

Add in Nissan's usual huge discounts (30% off list price was always achievable with the current model) and I'll seriously consider one of these.

A Toyota in drag

Surely this is just a Toyota CHR with a nasty big Nissan nose bolted on????
View all comments (16)