BACK TO ALL NEWS
Currently reading: 2019 Skoda Scala UK pricing and specifications revealed
UP NEXT
Toyota bZ4X deliveries still on hold after wheel detachment concerns

Skoda has announced UK prices, engine options and trim specifications for its new Scala hatchback. The Ford Focus rival will be available for order from May, priced from £16,595.

Four engines are offered for UK-bound Scalas: two 1.0-litre, three-cylinder petrols with 94bhp or 113bhp, a 1.5-litre, 148bhp four-cylinder petrol and a 1.6-litre, 114bhp diesel. All are powered through five- or six-speed manuals, with a seven-speed DSG automatic an option with all engines except the entry-level 94bhp 1.0-litre. There are currently no plans to introduce the plug-in hybrid powertrain previewed by the Vision RS concept. 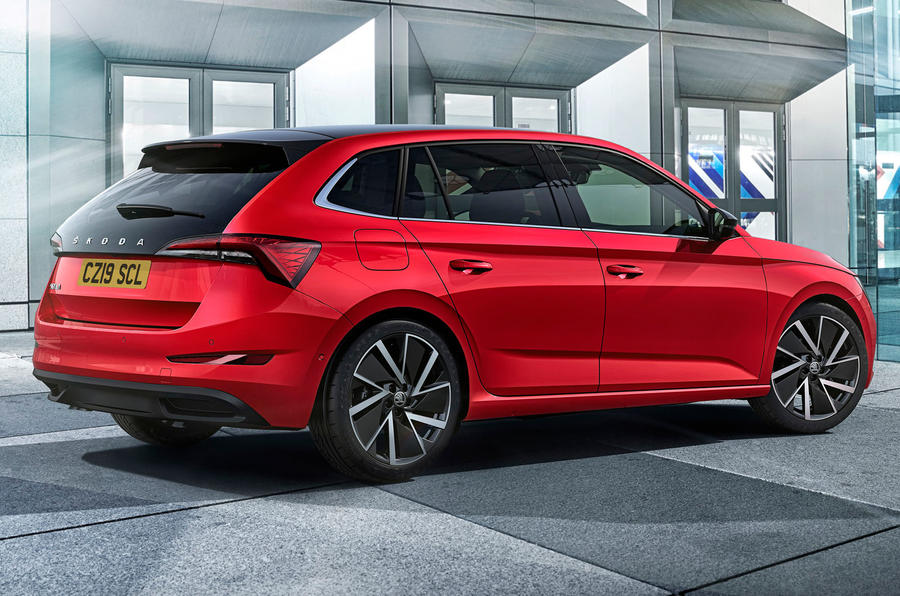 SE trim is priced from £18,580 and adds cruise control, parking sensors, an 8.0in touchscreen and passenger seat height adjuster.

Range-topping trim is available from £20,380. Alongside Skoda’s new infotainment system, the Scala SE L is fitted with a 9.2in touchscreen, climate control, keyless entry, start/stop, a digital head-up display and microsuede upholstery. The top-spec Scala is marked out from the rest of the range by its 17in alloy wheels, LED rear lights and tinted rear windows.

The Scala, which Skoda replaces the Rapid in Skoda’s line-up, is only available as a hatchback, and is the first Skoda to be built on the Volkswagen Group’s MQB A0 platform, which is already used on models such as the Seat Ibiza and Volkswagen T-Roc.

It marks the debut of what Skoda is calling a “more emotional” design language, and takes styling cues from the Vision RS concept shown at the Paris motor show in 2018. 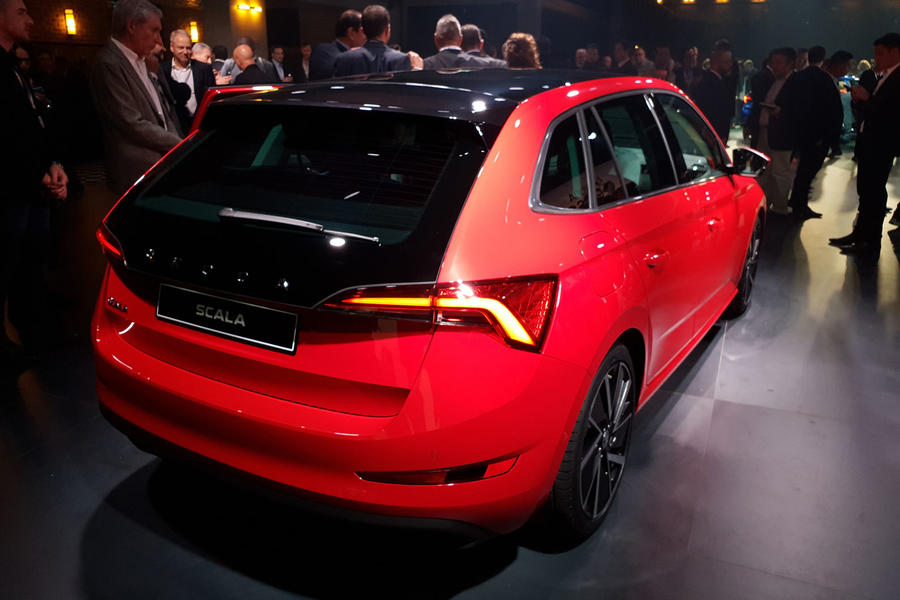 That includes the optional all-glass rear window, which replaces a more traditional tailgate and features the word ‘Skoda’ written out in place of a logo (the manufacturer's first car to do so) in an effort to distinguish the brand in markets where it is less well known, such as China.

The Scala also features an all-new interior, with new materials throughout including microfibre fabric for the seats on top-spec models and soft foam surfaces for the dashboard trim. The free-standing touchscreen infotainment system can be paired with an optional 10.25in virtual cockpit display in place of traditional instruments, and uses the latest generation software - a first across the entire VW group. The main touchscreen sits on a small ‘shelf’ for people to brace their hands while operating it.

It is the first VW group car to be always-connected, with the ability to update over the air and download apps that widen the infotainment system's abilities. It is also among the very first cars with wireless support for Android Auto and Apple CarPlay, albeit as an option rather than standard equipment. Head of marketing Alain Faey called the Scala a "benchmark in infotainment and productivity", one that would set the trend for the Volkswagen group rather than follow by example. 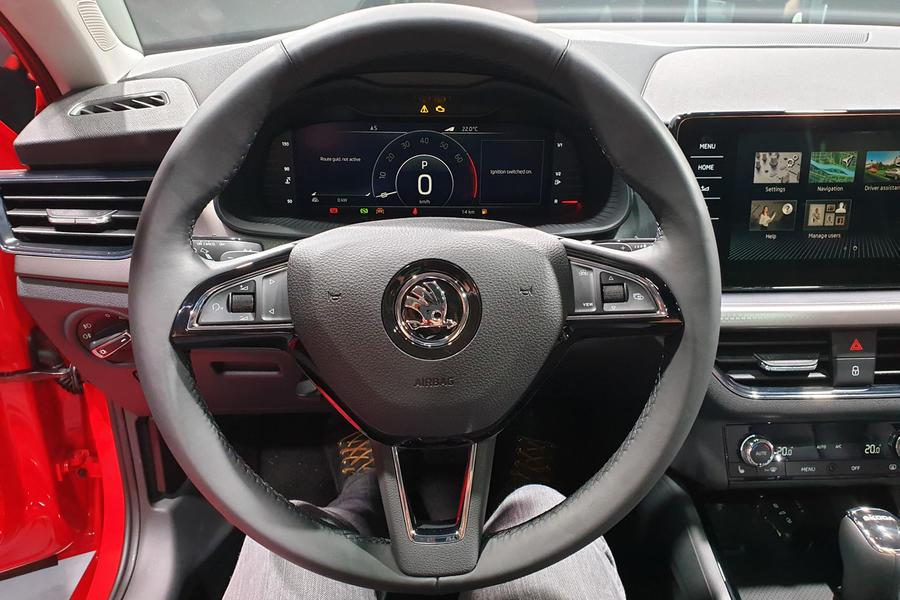 The five-seat Scala is 4362mm long, making it marginally longer than the Skoda Rapid Spaceback it replaces, with its larger 2649mm wheelbase allowing for increased legroom. At 467 litres, Skoda also says the Scala has the largest boot in the segment. An optional electric tailgate also features.

Other trademark Skoda touches, including an umbrella compartment in the driver’s door and ice scraper in the fuel filler cap that doubles as a tyre tread depth gauge, make a return.

An optional sport chassis will ride 15mm lower than the standard car and include four user-adjustable drive modes for a more responsive throttle and steering. 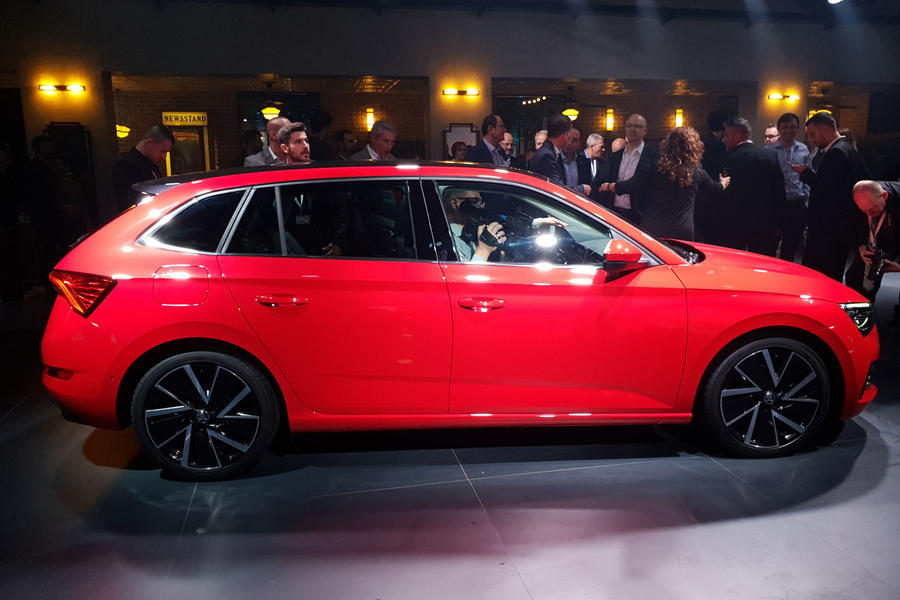 Scala is a Latin word that means ‘ladder’, and represents Skoda’s ‘next step forward in the compact segment’ according to company boss Bernhard Maier. Skoda is targeting a European market share of 4.3% for the Scala, exactly double what it achieved with the Rapid.

Customer deliveries are set to begin in the summer. Skoda says further information relating to performance and economy will be announced nearer the time.

Skoda to push bolder design ahead of first electric cars

The novelty of glossy displays will fade..

Hopefully, we will soon read a proper report that includes details of engine response, of road manners, comfort, capacity and such...

Yes, glossy screens with lots and lots of functions are great and connectivity is the new black: fine! Still, no full PC capacity to amuse the darlings in the back and iffy wiFi...

I have most of these things on my new SEAT (same stable) and in truth, unless the car is motionless, many are rather tricky to operate on the touch-screen when moving; and finger marks do show badly, too. The 'mirror function costs an eye-watering €160 to double up on GPS and telephone: why? Who can actually consult apps on the go? And if you have to stop, use your phone?

Fashions will move on: whatever next to distract us from dreary speed limits?

The UK pricing straddles both the upper end of the Fabia and lower end of the Octavia,plus it's a lot more distinctive than the outgoing Rapid.Not so keen on the lower powered three cylinder car,but I'm sure it will be enough for most Scala customers. it should sell well,will be interesting to see if a VRS comes out later as well