Following the recent unveiling of the new Audi S3 hot hatchback, our spy photographers have snapped the hardcore RS3 variant in minimal disguise at the Nurburgring.

The range-topping model is set to take its power from the same turbocharged five-cylinder 2.5-litre petrol engine as the new RS Q3 performance SUV. The 394bhp output of this unit will make the RS3 one of the most powerful cars in its segment, just below the 416bhp Mercedes-AMG A45 S.

The RS3 is likely to improve on the larger RS Q3’s 4.5sec 0-62mph time, potentially taking it below 4.0sec. It could also be capable of beating its 174mph top speed, although RS models are traditionally electronically limited to 155mph as standard.

The prototype in these images wears much less camouflage than we've seen before, previewing how the RS3 will be differentiated from the S3, which is due to arrive in dealerships in October. 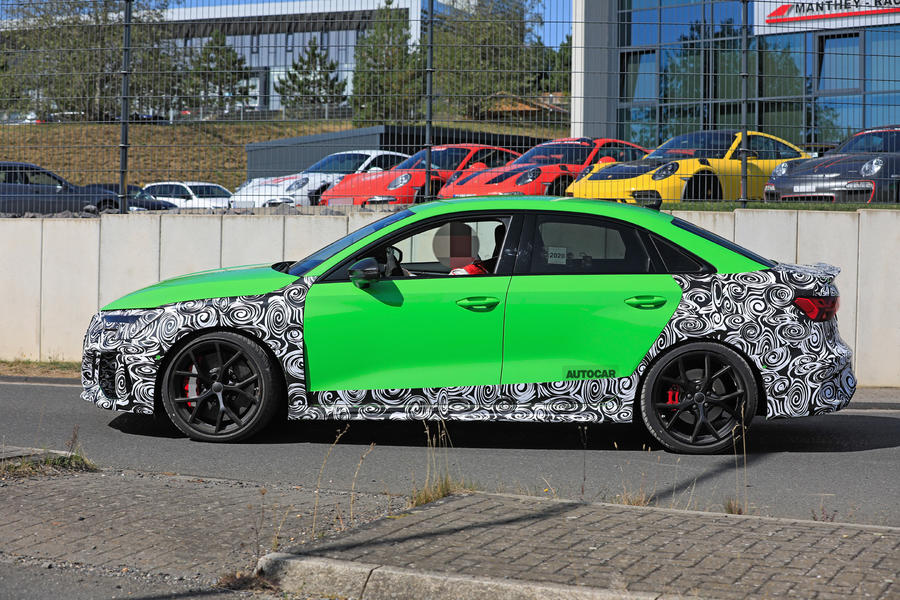 Its alloy wheels are considerably larger than those of the standard car and are wrapped in much lower-profile tyres. The RS3’s potential is further hinted at by large, ventilated brake discs and a pair of classic RS-style large-bore tailpipes.

Audi Sport’s line of RS performance models is as varied as it has ever been, with performance variants of the TT, A3, A4, A5, A6, A7, Q3 and Q3 Sportback currently on offer. The range is now headed up by the new RS Q8, which packs 592bhp from a twin-turbocharged mild-hybrid 4.0-litre petrol V8.

In two years time I reckon electric cars in this sector will put this RS Audi in the shade. Therefore we maybe seeing the last of our German neighbours playing Top Combustion Trumps!
Craig1988 21 September 2020

Maybe i'm getting old and boring but all these new hyper hatches are just getting plain boring. massive power figures, low 0-60 figures and automatic gearboxes. Soon to be driven up and down the M6 3mm away from the car in front by an absolute pleb.

Ford dont share the cost of making an RS viable or produce enough variants to offset the cost, this Audi is also a Golf, or a Leon or an Octavia, or numerous SUVs all built using the same basic components and sharing the development costs, if you want a Focus RS buy an ST and speak to Mountune, they have already built a 500bhp Focus.