BACK TO ALL NEWS
Currently reading: Audi updates RS4 Avant with more aggressive styling for 2020
UP NEXT
New electric cars 2022: what's coming when

Audi has given its RS4 Avant performance estate a facelift, including a reshaped grille and flared wheel arches, just two years after the current generation was launched.

The mild redesign follows on from the recent refresh of the standard A4 and is limited mostly to a revised front end design and enhanced interior technology.

The RS4’s front grille, bumper and lower splitter have been overhauled to further distance the performance variant from the standard model and bring it into line with the new RS6 Avant, which sports a notably more aggressive stance than the outgoing RS4.

The gloss black honeycomb grille featured across Audi Sport’s range of top-rung RS models has been designed without a frame to sit flush with the bumper. The model’s LED headlights have also been reshaped and can now be specified with darkened bezels.

As is tradition with Audi’s sportier models, the wheel arches are substantially flared to accommodate wider wheels and tyres, the RS4 measuring a full 30mm wider overall than the standard A4 at the front and rear.

Inside, the facelifted model receives a new 10.1in infotainment touchscreen, equipped with Audi’s new MMI acoustic response technology, in place of the outgoing car’s rotary controller. 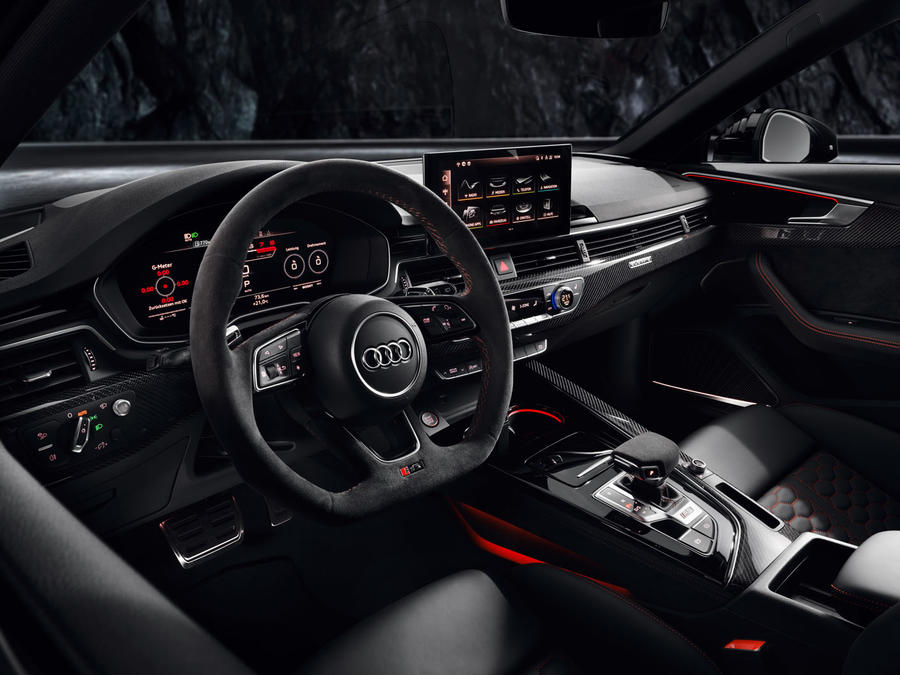 The new RS4 Avant will make its public debut at this weekend’s DTM season finale at the Hockenheimring, ahead of sales beginning later this month.

UK pricing is yet to be confirmed, but a European starting price of €81,400 suggests we’re likely to see a slight increase over the current model’s £67,585 price tag.

Just wondering when someone with political influence is going to question whether aggressive styling on cars encourages aggressive / dangerous / selfish driving?

With so many people in the country at the moment getting downright nasty with others over differing opinions, throwing around insults without actually trying to see that person's point of view and why they might actually have a point, I'm wondering how long it will be before we're all forced to drive around in faceless self-driven electric boxes in order to calm everyone down?

At €81k starting price it will be more than a slight increase over £68k thanks to the brexidiots ruining the £.

At €81k starting price it will be more than a slight increase over £68k thanks to the brexidiots ruining the £.

Interestingly, the RS4 retains the pre-facelift A4's continuous high-level bodyside crease (incorporating the bonnet to wing shut-line) albeit merged into the new wider wings, and the sharper profile lower bodyside indent.  It also doesn't get the facelift A4's half-hearted crease line through the door handles.  Consequently, it's rather better looking than other facelifted A4 models, which are a wholesale disimprovement over the original, IMHO.