BACK TO ALL NEWS
Currently reading: New Audi Sport RS Q3 boosted to 394bhp
UP NEXT
How Matt Windle is putting Lotus back on the map

Audi Sport has revealed the second-generation RS Q3 SUV, which now offers 394bhp from an upgraded version of its 2.5-litre turbocharged engine.

The original model was launched in 2013, with Audi Sport opting for a compact SUV model due to a lack of direct premium class rivals. But with opposition now including the Mercedes-AMG GLA45 and BMW X3 M, the Ingolstadt firm has given the new RS Q3 a power boost and other upgrades.

The machine, mechanically identical to the new RS Q3 Sportback that has also been unveiled, retains the five-cylinder, 2.5-litre turbocharged petrol engine from the first-generation model, and also used in the TT RS. But it has been tuned to produce 394bhp, compared to 335bhp in the original (362bhp for the Performance variant), with 343lb ft of torque available between 1950 and 5850 rpm.

The new engine is 26kg lighter than in the previous model, with 18kg of those savings due to a new aluminium crankcase. Audi Sport has also upgraded the engine with plasma-coated cylinder liners and smaller crankshaft bearing, while the pistons feature integrated channels for air cooling. That means the RS Q3 can reach operating temperature faster, reducing fuel consumption.

The RS Q3 features a number of design changes from the standard Q3, with exterior design Matthew Baggley saying the key aim was to “explain visually there’s a five-cylinder monster beneath the hood.”

He added: “Normally you’d differentiate a performance version from the standard model by adding interesting details and elements, but we wanted to add value differently, by reducing features, making it simpler and more pure. We’ve added value through big, bold gestures.” 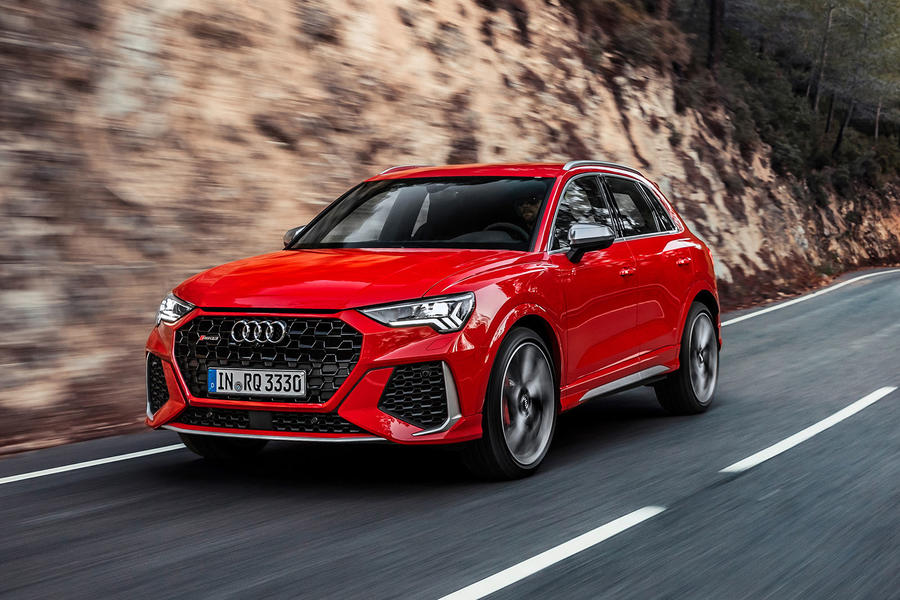 That includes a revamps front, with a single frame grille and sculpted air intakes with a design similar to those featured on the recently revealed RS6 Avant and RS7 Sportback. They intakes feature a ‘boomerang’ design detail bespoke to the RS Q3 and Q3 Sportback.

As with the RS6 Avant and RS7 Sportback, buyers will be able to select to have the grille-mounted Audi rings and other logos on the car offered in black.Pronounced wheel arches increase the width of the RS Q3 by 10mm, although the actual track is unchanged.

At the rear, the RS Q3 features a bespoke spoiler mounted on the rear of the roof. The spoiler has been tuned in a wind tunnel to optimise downforce, with Baggley describing it as looking “like a controlled ski ramp”.

The rear features a number of other design changes over the standard Q3, including a bespoke rear bumper and diffuser, and – for the first time on the RS Q3 – large twin exhaust pipes. There are standard LED lights both front and rear.

The RS Q3 sits 10mm lower than the regular Q3, and feature sports suspension and Audi’s Dynamic Chassis Control as standard, with MacPherson struts at the front and a four-link design at the rear. It also features specially tuned progressive steering, with a choice of 20 or 21in wheels and steel or ceramic brake discs.

The interior features a number of changes to the driver-focused interior of the RS Q3, including a bespoke leather-covered sport steering wheel featuring new paddle shifts and bespoke multifunction buttons.

There are also a number of RS specific displays and modes in the Audi infotainment and digital cockpit. The RS Q3 comes with black leather and Alcantara sports seats, with Nappa leather seats with an integrated head restraint available as an option.

There are several other RS design details in the car, with RS design packages available to offer further customiation options.

The RS Q3, along with the sibling RS Q3 Sportback, will go on sale early next year. Pricing has not been set yet, but expect an increase from the £44,785 starting price of the old RS Q3.

The two models will kick off a major expansion of Audi Sport’s SUV range, which is set to continue with a range-topping version of the RS Q8 large SUV. That car has been spied testing, and is tipped to be revealed later this year.

...still look plastic if you ask me they should be metal like in the new RS7 and RS6, a bit disappointing evn though it is a cheaper vehicle.

Would definitly prefere the

Would definitly prefere the normal one to the sportback.

There is one thing I dont understand and that is the fact that audi call thier RS3 'hatchback' a 'sportback' but the RSQ3 'coupe' is a 'sportback' aswell just seems a bit to confusing to be true. I think 'sportback' should mean a four-door coupe like the RS7 sportback and the kia stinger is a sportback.

until ABT tuning work thier magic on it and make this thing have like 500hp and look insane.