BACK TO ALL NEWS
Currently reading: Mercedes-Benz EQC to be revealed today
UP NEXT
New 2026 Polestar 6 confirmed as 874bhp evolution of O2 concept

Mercedes-Benz EQC to be revealed today

The Mercedes-Benz EQC has been shown from the front in new preview videos released by the brand, ahead of an official reveal today. The first public outing of the all-electric SUV is expected to take place at the upcoming Paris motor show, given the timing of the preview, although Stockholm is where the car will be initially unveiled later this evening.

The Mercedes-Benz EQC has now been revealed. Click here to read our full story

In a series of videos released by the brand, the car's front and rear light bars are shown - the latter being a trend sweeping across the industry on many major SUVs, from the Kia Sportage to the Porsche Cayenne. The front light bar, including lighting above the Mercedes grille, is a less common feature. Also shown in a new clip is the car's dashboard, with its MBUX (Mercedes-Benz User Experience) infotainment system carried over from the new Mercedes-Benz A-Class.

Built on a newly developed Electric Vehicle Architecture platform constructed from a combination of hot-formed high-strength steel and aluminium, the EQC uses a new wiring loom that enables its driveline to send up to 100% of torque to the front or rear wheels.

The loom essentially takes the place of a propeller shaft between the two motors, which are located on each axle, but negates the need of a shaft tunnel in the floor, thereby improving interior space.

Although heavily camouflaged, the development EQC’s design links with the GLC are obvious. Mercedes designers have chosen not to give the brand’s first purpose-built EV a new look that flaunts its zero-emission credentials, but rather to match its design closely to the rest of Mercedes' SUV line-up. 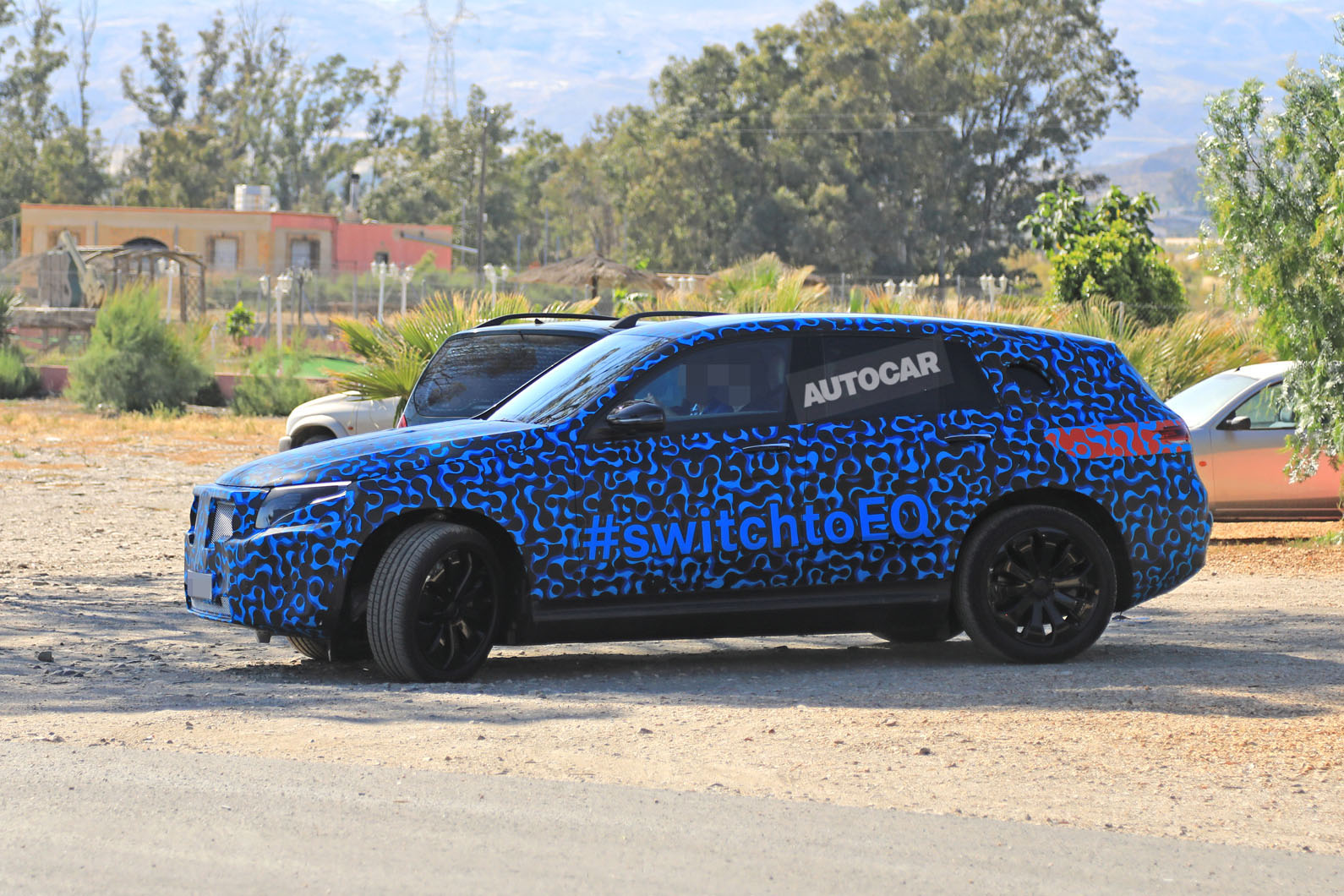 The EQC will, however, adopt several aerodynamic features to reduce drag. It will conceal its wipers beneath a flap along the trailing edge of the bonnet, while its lack of grille and flat underside will be significant features to enhance the body’s slipperiness.

Inside, the EQC will feature Mercedes’ next-generation infotainment and digital technology. The EQ concept previewed how it could look, with a wide screen that spans half the length of the dashboard, as well as touchscreen controls between the driver and passenger — similar in idea to the layout of the Range Rover Velar. Like the exterior, expect the EQC’s cabin to borrow much of its design from other Mercedes models.

Mercedes will quickly follow the EQC with the Mercedes-Benz EQA, an all-electric hatchback that was previewed in concept form at last year’s Frankfurt motor show. That car, also due on sale in 2020 as the entry point in the EQ line-up, will use a twin-motor set-up that produces around 268bhp and 369lb ft of torque, as shown in the EQA concept.

Article written by someone who has no idea what a wiring loom is, or does. They must think it's some kind of elastic band that shares the torque :-)
kboothby 7 September 2018

I read that and thought "a wiring loom that eliminates the propshaft!"

If I was being kind I think they where referring to a motor at each end/corner controlled by wire, not a plait of flat twin and earth providing motive power :)

Another SUV!, another SUV that’s going to save the Planet, the full light bar across the rear...that everybody is copying, this isn’t enough, there’s nothing radical or the buzz phrase...a step change in design that’s going to be different, enrich our lives, well all I can see, read it’s going to cost more.

Is a Saloon/ estate....apparently they’re making a comeback soon, the young and trendy don’t want an SUV, that’s what there Parents drove, who wants an oldies Car?, the want the tech though, just in case they missed something, So, Audi and so on, let’s have lovely saloons again...!

Is a Saloon/ estate....apparently they’re making a comeback soon, the young and trendy don’t want an SUV, that’s what there Parents drove, who wants an oldies Car?, the want the tech though, just in case they missed something, So, Audi and so on, let’s have lovely saloons again...!

Are you capable of writing coherent sentences?