Jaguar has pipped its competitors to the post, revealing its first stand-alone electric model before SUV rivals from Audi and Mercedes.

The 395bhp Jaguar I-Pace is the first pure-electric model from the Coventry-based brand and spearheads a range of forthcoming electrified Jaguar models. The next electric model, due next year, will be a new-generation XJ luxury saloon, and hybrid versions of its other models will start arriving by 2020.

With impending CO2 targets for 2021, the I-Pace will be a crucial part of Jaguar’s low-emission drive. It also gives the brand the opportunity to position itself at the cutting edge of a new breed of premium electric vehicles arriving in the next 12 months and beyond. The I-Pace’s 90kWh lithium ion battery delivers a range of up to 298 miles, according to the new WLTP cycle. That equates to 336 miles on the old NEDC test and 240 miles on the American EPA cycle. 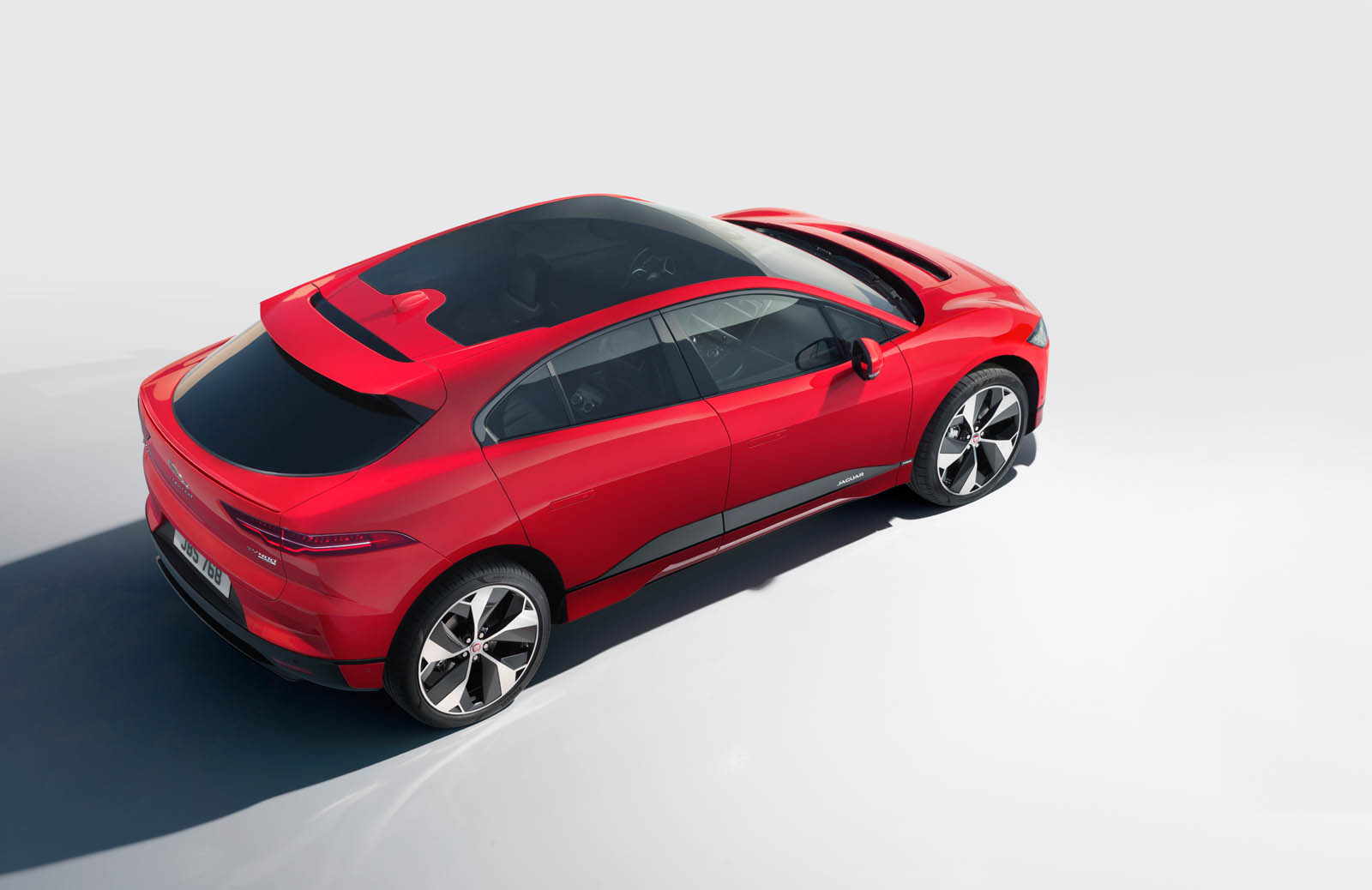 The Tesla Model 3 achieves 310 miles on the EPA cycle and the Renault Zoe – Europe’s biggest-selling EV in 2017 – offers up to 250 miles on the NEDC cycle. Most soon-to-launch electric SUVs, including the Audi E-tron and Mercedes Mercedes-Benz EQC, are predicting a 310-mile range.

Public charging to 80% capacity on a 50kW charger will take 1hr 25min, says Jaguar, and a 30min charge will give 80 miles of range. The model is also compatible with 100kW public chargers, which will give an 80% charge in 45min but are not yet available publicly in the UK. However, Jaguar says 100kW-plus charging points will be available to the public by the time the first I-Paces are delivered to customers in the summer. At home, a 7kW wall box will charge the battery from 0% to 80% in 10 hours. 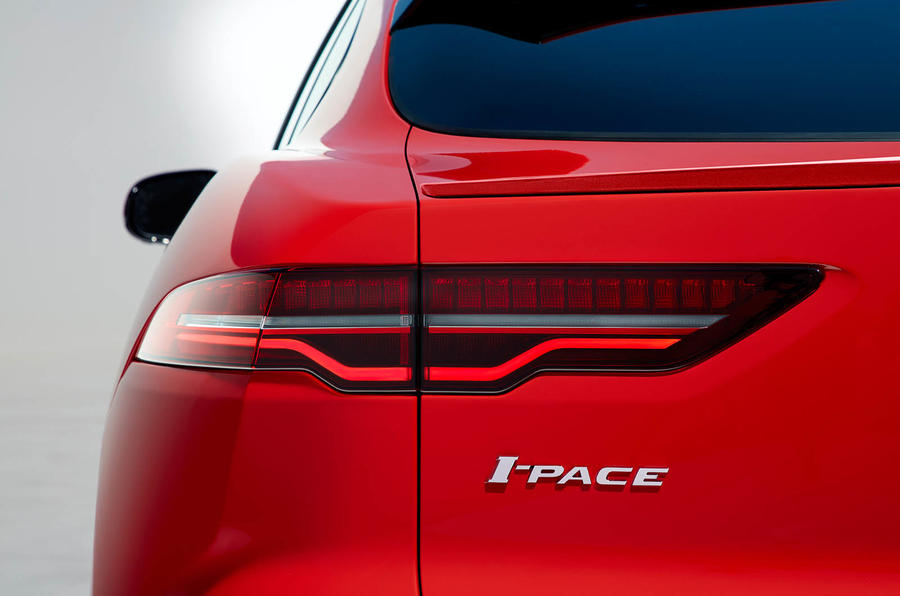 The I-Pace uses two electric motors, one on each axle to enable all-wheel drive. The synchronous permanent magnet motors – some components of which have patents pending for Jaguar – are “very light”, said vehicle line director Ian Hoban, at 38kg.

Jaguar claims the new aluminium architecture delivers the brand’s “most rigid body structure” yet, with the battery placed centrally between the axles. These use a double-wishbone front and an integral link rear set-up with optional air suspension and configurable Adaptive Dynamics. The location of the battery allows for 50/50 front-to-rear weight distribution and a centre of gravity that’s 130mm lower than the F-Pace’s.

“We were obsessed with weight distribution,” said Hoban. “It must handle like a Jaguar.” 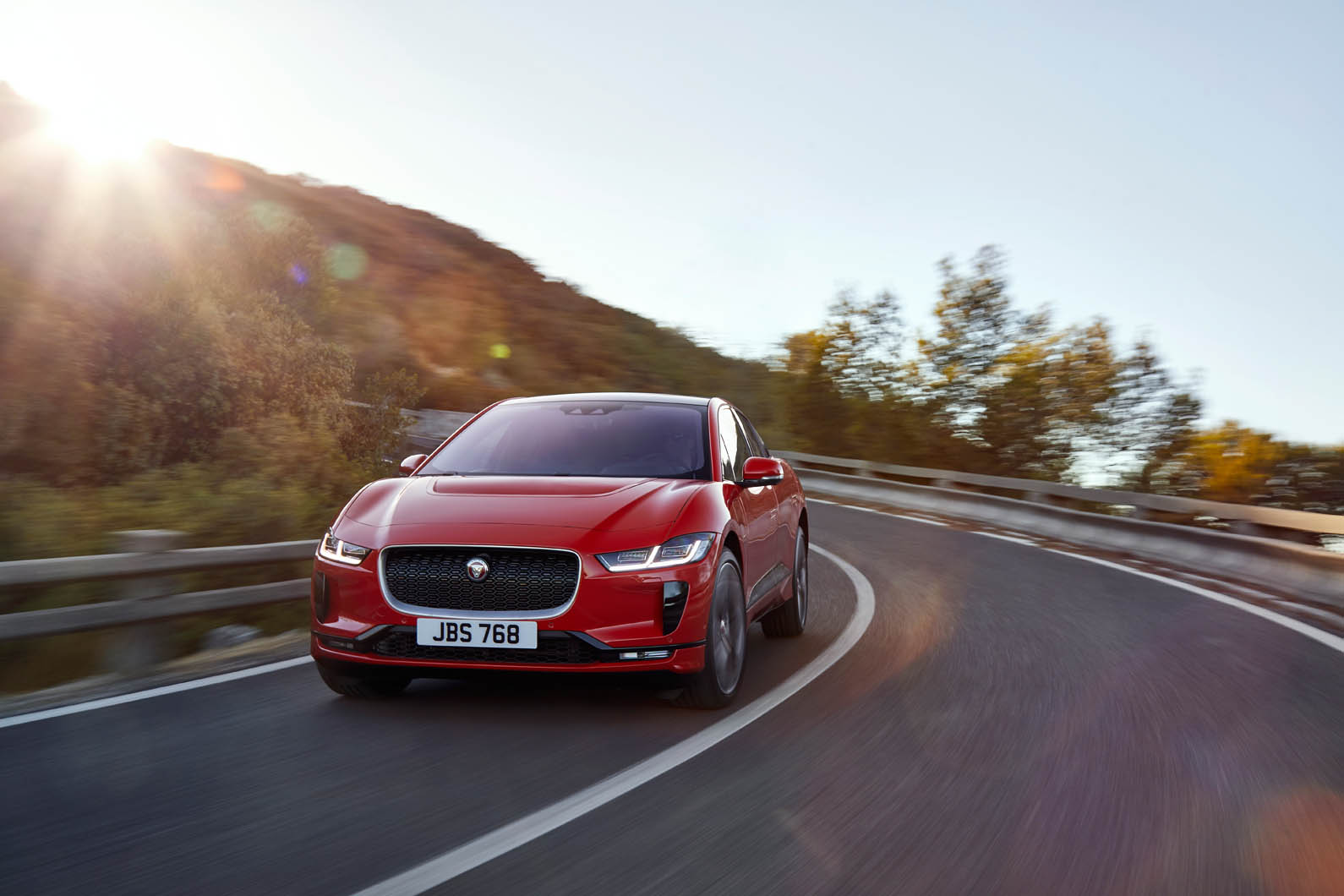 In its appearance, the I-Pace stays extraordinarily close to the concept version. Jaguar design director Ian Callum said the car is “the closest we’ve been in terms of a concept and a production car”.

The final car is 12mm narrower and 12mm lower than the concept. “The concept had to be exaggerated,” said Callum. The light detailing has been toned down too. “It was a visual aspect rather than a working technology,” he added.

The interior shows a bigger difference. Callum said: “The concept’s screens meant too much development time. But the sport seats are closer to the concept and will be available [as an option] from launch.” 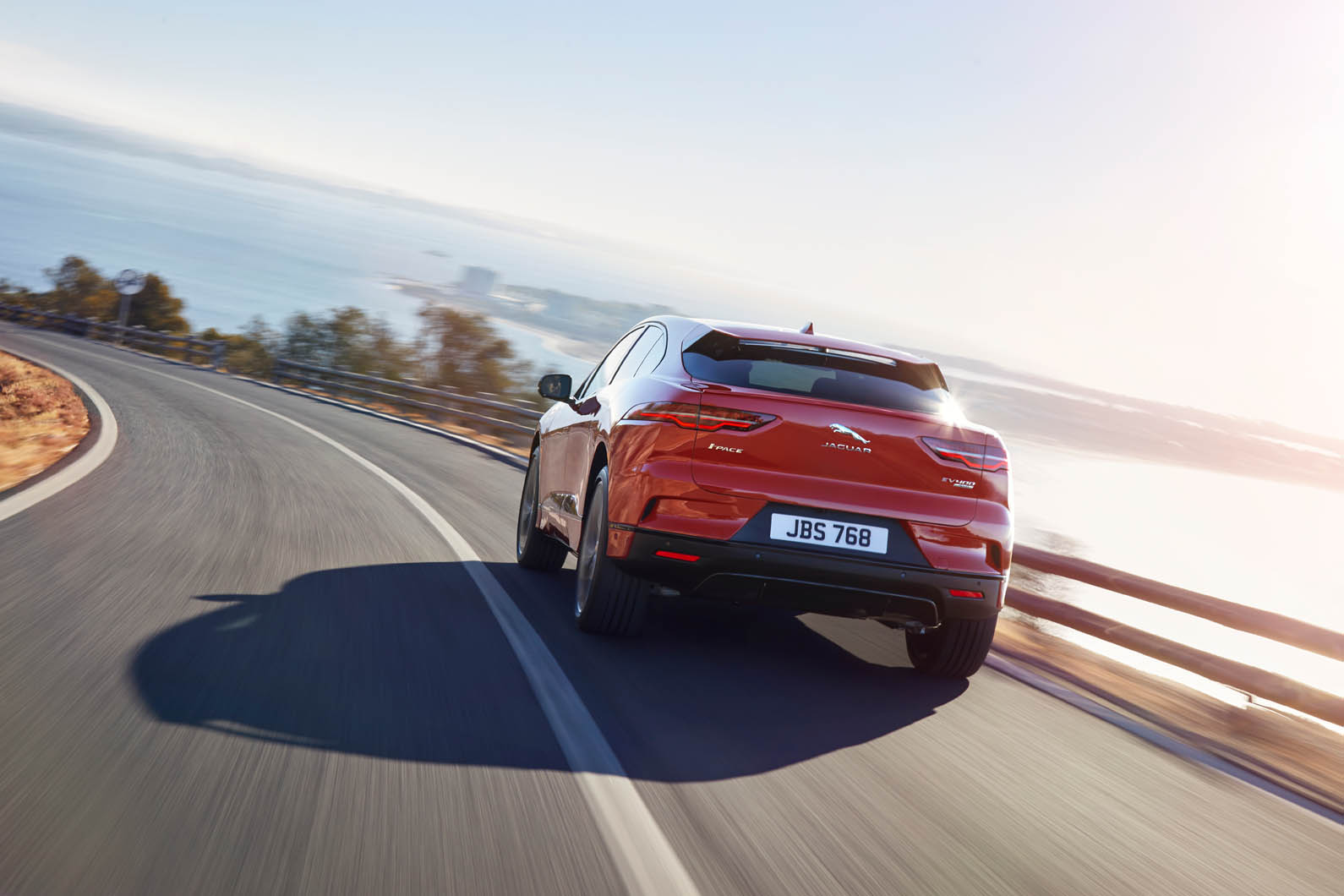 The proportions of the car are very similar to a Porsche Macan’s but with a longer wheelbase, as is typical of EVs due to the positioning of the battery. The I-Pace measures 4682mm long – on a par with Jaguar’s XE saloon – with a wheelbase of 2990mm, 18mm more than the Macan. Hoban said this translates into extra knee room. “It has 30mm more knee room than a Porsche Cayenne,” he said.

Callum said: “It has a relatively long wheelbase because of the battery. We brought the front occupant forward and kept the rear occupant where they were for space. It has the interior space of Cayenne but the dimensions of the Macan.” 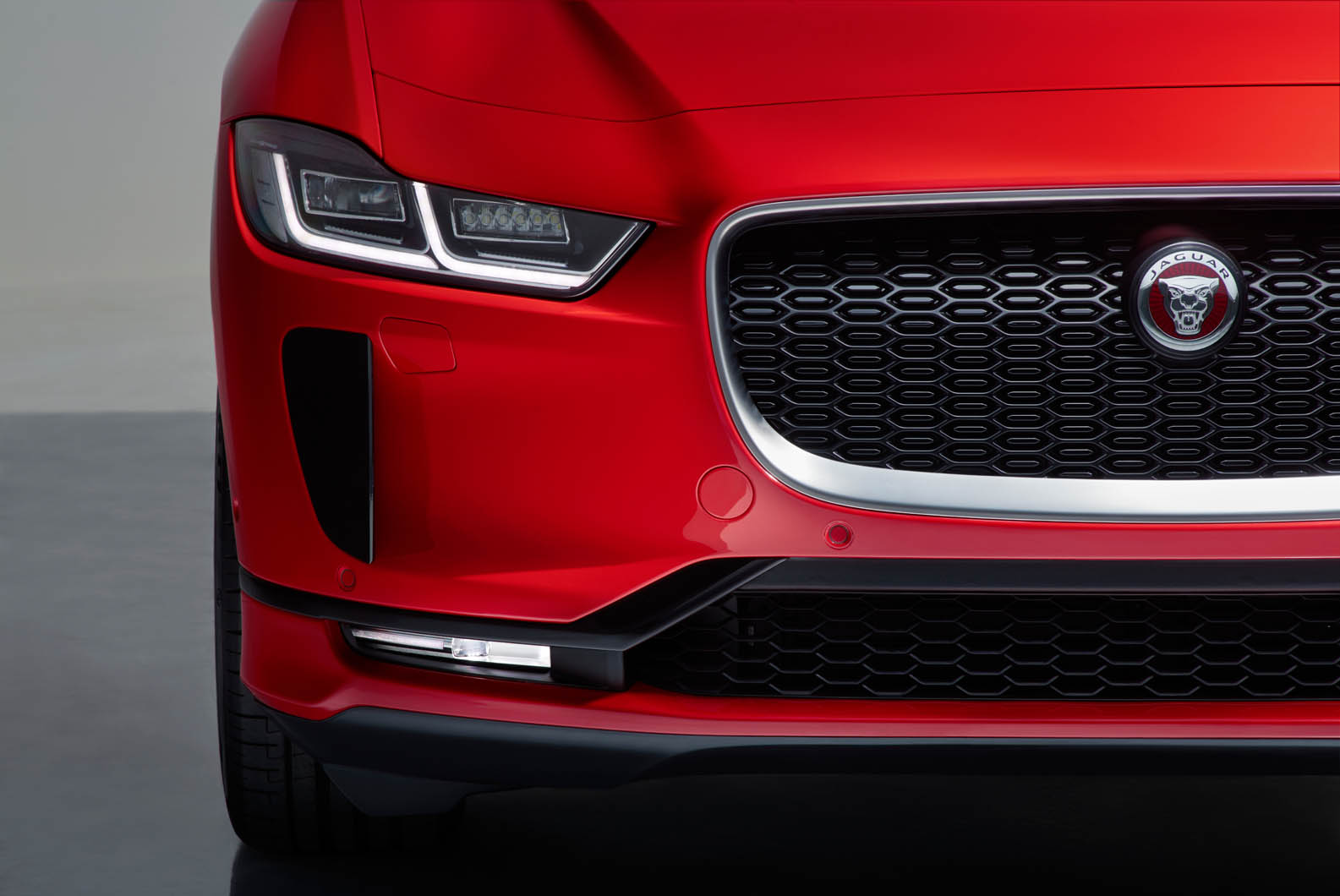 “It’s probably the most exciting car project I’ve been responsible for. There was just the skateboard [chassis] and then we could do what we wanted, other than some safety requirements. For me, it’s the shape of the future.”

The I-Pace pictured here sits on 22in wheels – Callum’s preference – but wheels as small as 18in are available.

Aerodynamics was a big focus in the design, with the squared-off rear helping to reduce the drag coefficient to 0.29. Active vanes in the grille open when cooling is required, and close when not needed to redirect air through the bonnet scoop, smoothing airflow. 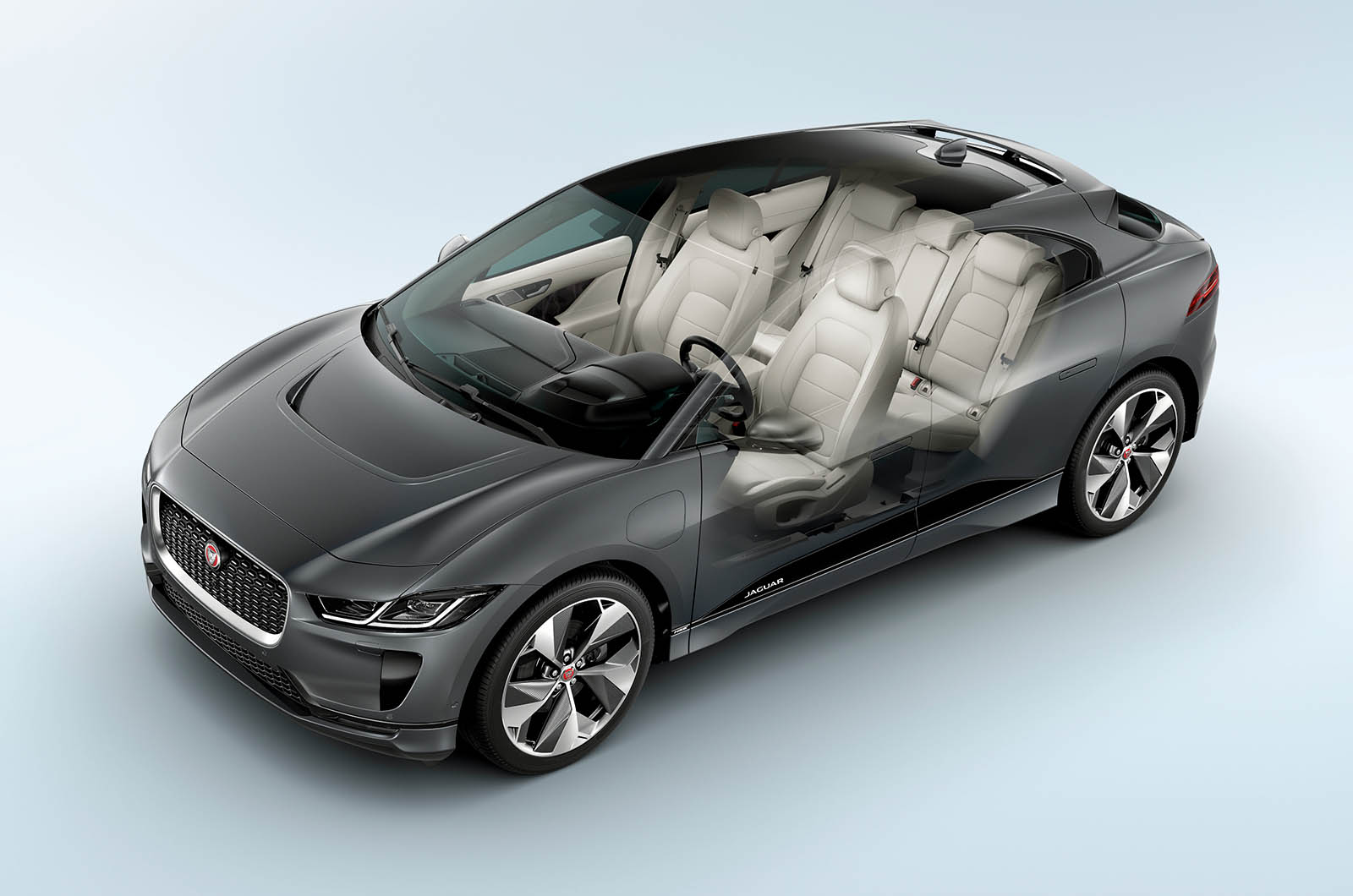 At the rear is a subtle lip spoiler (as well as the bigger spoiler on the windscreen). “It [the lip spoiler] was going to be an option but we decided all cars would have it to help aero,” said Callum. “The biggest focus for air is the side mirrors. We pulled the mirrors out quite a bit. It helps air stream and visibility.”

Asked if many design compromises had been made with the I-Pace, Callum said: “We got our way with this car. The main restriction is stamping aluminium. It’s not as crisp as the concept car.

“I was keen the I-Pace didn’t get too big. It’s got to be appealing to urbanites. We’ve done long-bonnet, big-engine design in all those sports cars. I’ve got this out of my system. The shape of the I-Pace has been in my head for a long time. [Electric car design] unshackles you in so many ways you can do stuff that’s more interesting.” 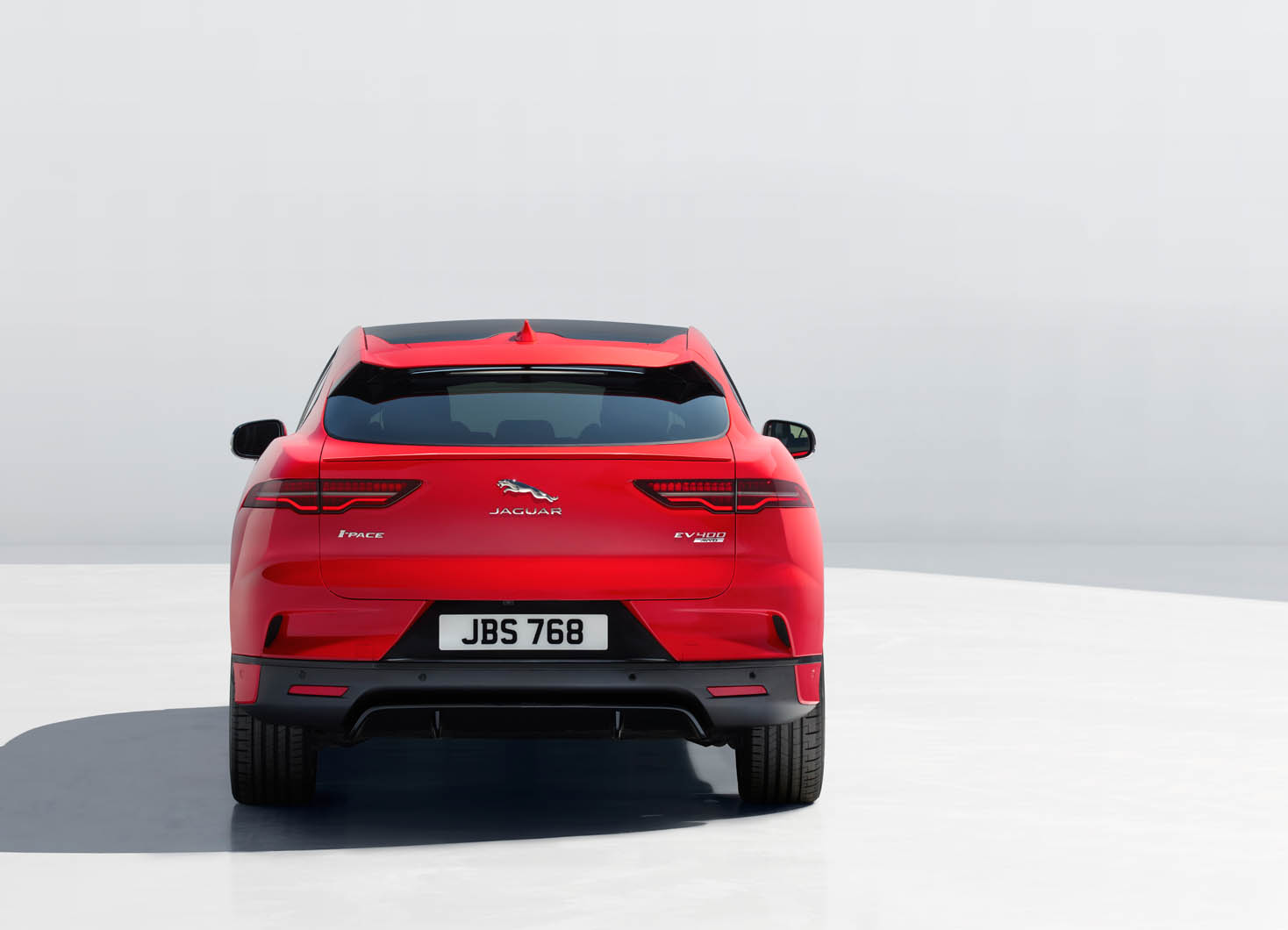 Callum said the I-Pace’s nose could not be any shorter because of crash regulations. Inside, Jaguar has “worked hard to maximise space in the car”, according to Callum. There are a number of storage areas in the front and rear, and the boot has 656 litres of capacity, compared with 500 litres in a Macan.

The optional full-sized panoramic roof absorbs infrared light, which is meant to keep the cabin cool and removes the need for blinds.

Jaguar’s Touch Pro Duo infotainment system has two screens in the centre column, where most functions are controlled. However, the I-Pace keeps traditional rotary controls too.

Callum said: “I’m a great believer in more tactile feel in cars. For the moment, people are more used to touchscreens. I pushed hard to not follow the fashion for iPad-type screens.” The I-Pace has a number of connected features, such as battery pre-conditioning, where you can pre-heat or cool the cabin and battery while plugged in, using zero battery power. That can save you between 31 and 62 miles on a typical -10deg C day, said Hoban.

It also uses artificial intelligence (AI) to calculate remaining range based on climate, weather, topography, driving style and traffic conditions. The AI can sense the number of occupants and adjust the climate control accordingly to make it as efficient as possible.

The I-Pace is the first Jaguar to get over-the-air updates, which not only update infotainment and vehicle systems but also keep track of battery usage.

It will be built at the Magna plant in Austria alongside the Jaguar E-Pace. It shares a trim and final line with the E-Pace and has its own body-in-white facility.

Jaguar’s lowest-spec I-Pace  is expected to be the range’s best-seller, according to JLR’s UK managing director, Jeremy Hicks. The I-Pace S will account for around two-thirds of sales in the UK, Hicks believes, contradicting the usual behaviour of most British buyers who tend to go for top-end versions. Hicks attributes the market’s interest in the entry-level car to keen pricing (especially against its rival, Tesla) and to the S’s impressive equipment level.

Europe, China and the US are all expected to be popular destinations for the zero-emissions model. California is due to be particularly important for sales, given its appetite for environmentally friendly vehicles, while Norway – known for its notable EV incentives – has taken the biggest number of I-Pace pre-orders.

Jaguar is cautious about revealing its planned production volumes for the car, but says the car is “pretty much sold out” for the first year. The company is coy about revealing planned production volumes at Magna Steyr’s factory in Graz, Austria, but I-Pace is believed likely initially to outsell the Jaguar F-Type at more than 10,000 a year, with available capacity one of its problems.

I-Pace batteries: EV could get different battery sizes in future

Unlike many of its rivals, Jaguar is offering only one battery size for its I-Pace, which promises a range of up to 298 miles.

But vehicle line director Ian Hoban told Autocar that the car maker did look at a modular system for batteries, in the same vein as Tesla and upcoming electric brands such as Volkswagen’s ID. He said: “We did consider it, but we decided one propulsion system and one specification was most appropriate for launch.” 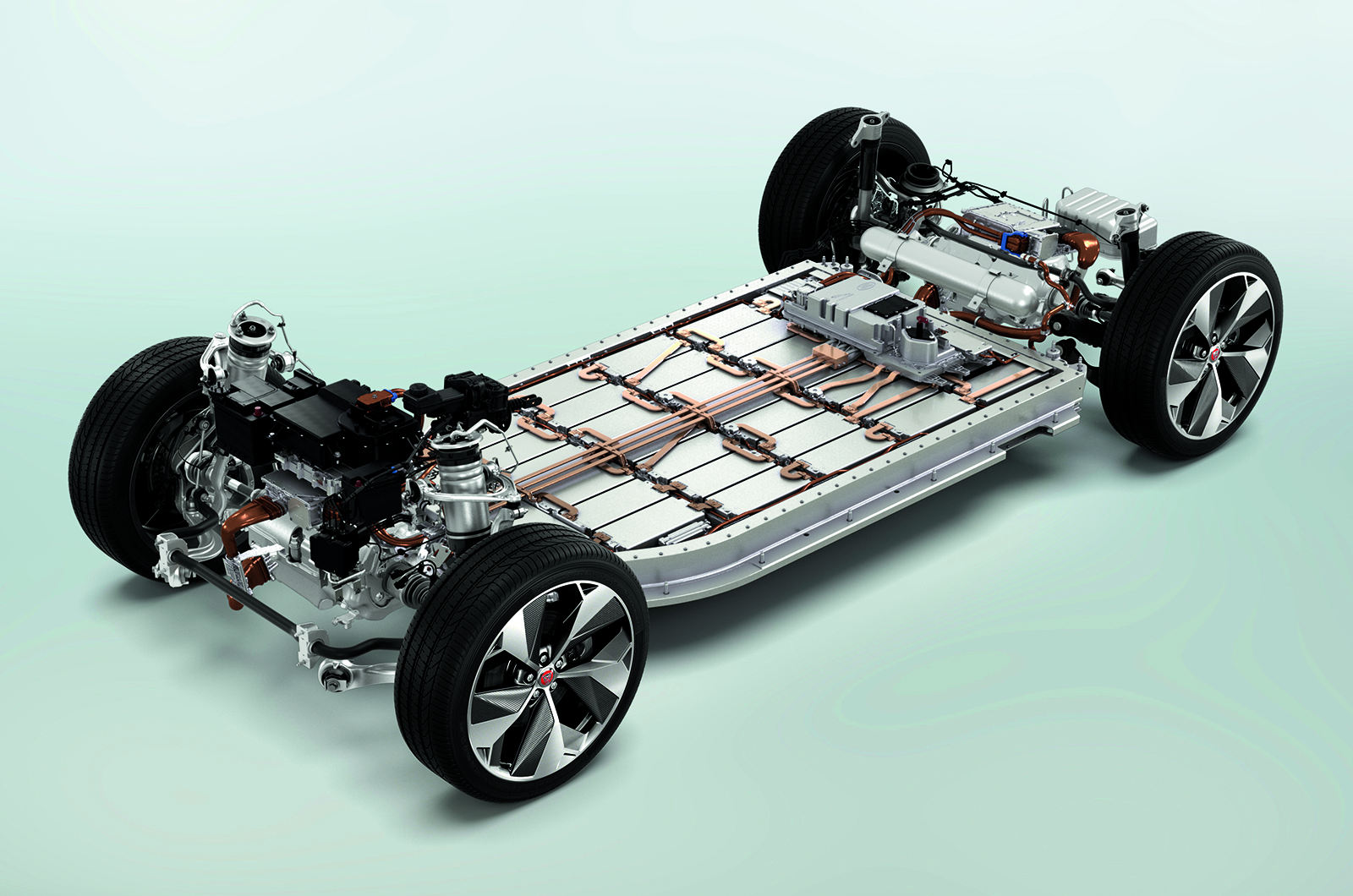 He acknowledged that 298 miles was plenty of range for most people but added that the key is “delivering range all day, every day”.

However, Hoban admitted a smaller battery and shorter range – which would, in turn, mean a cheaper list price – could “offer a good business proposition in future”.

The firm is already working on solid-state batteries with the University of Warwick and expects to see that technology arrive in the early to mid-2020s. But at least for the mid-term, Hoban said the focus will be “energy density with lithium ion coupled with future-proofed charging systems”.

Chad's in the back

What an unremittingly ugly fucker.  Another victim of the world glass shortage, a look which is appalling on cars but grates even more so on jeeps, since they are already such lardy lumps.

I forgot to mention the steering wheel

Which is one of my bugbears in Jaguars - this one looks MUCH better. You do listen after all.

Jaguar. The hallmark of electronic quality and reliability even in 2018. No thanks, the panel gaps alone make me sick.

No thanks, the panel gaps alone make me sick.

Just show me one example where the panel gaps make you sick.