BACK TO ALL NEWS
Currently reading: BMW 2 Series Gran Coupe leaked ahead of tonight's reveal
UP NEXT
Jaguar boss signs off plan for radical new EV line-up

BMW's new 2 Series Gran Coupé is due to be revealed later tonight, but official images have been leaked online to spoil the show.

The BMW 2 Series Gran Coupé has now been revealed in full. Click here to read the story

While the front-end is recognisable from the 2 Series' hatchback sibling, the rear-end shape appears to be inspired by the firm's latest coupe SUV, the BMW X4, with similar tail-lights and tailgate shape.

The need to accommodate two conventional front-hinged rear doors and sufficient rear seat leg room is said to be behind the decision to give the new car a wheelbase that's halfway between the 2690mm span of the 2 Series Coupé and the 2810mm of the 3 Series saloon.

Inside, the 2 Series Gran Coupé will sport a new interior layout that's also set to be adopted by the successors to today’s 2 Series Coupé and 2 Series Convertible, which are due in 2020.

The turbocharged three-cylinder and four-cylinder engines of the 2 Series Gran Coupé will mirror those of the existing line-up. 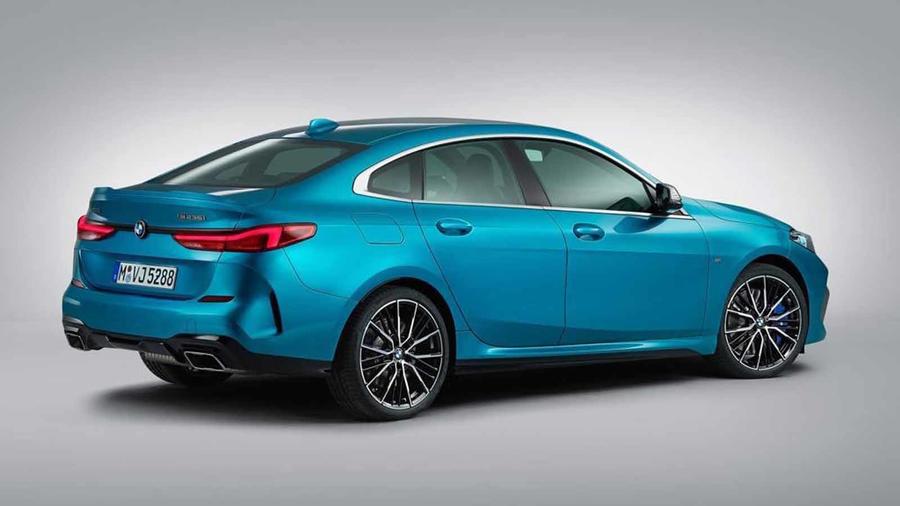 Like its two-door siblings, the 2 Series Gran Coupé will offer a choice of a standard six-speed manual or optional eight-speed torque-converter automatic gearbox, with xDrive four-wheel drive available as an option. However, the latter will be offered in combination with only a limited range of engines.

The highlight of the new line-up, though, will be the M2 Gran Coupé.

This model will use the same 365bhp turbocharged 3.0-litre in-line six-cylinder engine as its highly lauded two-door sibling. It will be offered with a six-speed manual or a seven-speed dual-clutch automatic gearbox.

Although it's still early days, that engine – designated S55B30 - is expected to provide the M2 Gran Coupé with similar performance to the M2, which has an official 0-62mph time of 4.4sec in manual form and an electronically limited top speed of 155mph.

The 2 Series Gran Coupé will be produced alongside the 2 Series Coupé and 2 Series Convertible at BMW's plant in Leipzig, Germany.

A plug-in hybrid model is also mooted. This is expected to use BMW’s turbocharged 1.5-litre three-cylinder petrol engine and an electric motor mounted within the forward section of a standard eight-speed automatic gearbox.

With a lithium ion battery pack positioned beneath the floor of the boot, the hybrid set-up is intended to provide the 225e with an electric-only driving range of up to 31 miles.

The BMW 2 Series Gran Coupé has now been revealed in full. Click here to read the story

I have just been sick in my mouth

Take the rancid new 1 Series and weld on a boot in the style of an Astra Belmont (saloon from truncated hatch), glue on the rear styling of the fabled beauty that is the X4.

Vomit.  Continuously until nothing is left.  Shake head, walk to the Mercedes showroom if you must overspend on a small family vehicle.

I still can’t see how this is

I still can’t see how this is going to spawn an M2 Gran Coupe model; numerous discussions have been had on this on various BMW forums and it’s already been established that this layout hasn’t the room for 6 cylinder engine. Happy to be proven wrong

The time has come..

..when BMW is making Korean-mimicking front wheel drive uglyness. Good that there are other options now.
View all comments (46)