BMW has revealed the completely re-engineered 1 Series, with the range-topping 302bhp M135i model given all-wheel drive for the first time to directly rival the Volkswagen Golf R and Mercedes-AMG A35.

While the premium hatch has been rear-wheel drive since it was first launched in 2004, BMW has taken the significant step of switching to a front-wheel-drive platform with the new third generation, in order to improve the car’s interior space and practicality. The new model is based on the FAAR architecture, also used for the X1 and X2 SUVs, and the Mini Countryman.

Despite the switch, product manager Jochen Schmalholz said BMW was determined to ensure the car offered a dynamic driving experience, especially for the range-topping M135i hot hatch. “We put a lot of effort into producing a car that combined both advantages, and still drove and handled like BMW customers would expect,” Schmalholz said.

Key to ensuring the M135i offers maximum performance is the use of BMW’s xDrive all-wheel-drive system, which can send up to half the power to the rear axle when needed. The 335bhp 3.0-litre six-cylinder engine used in the previous-generation M140i won’t fit in the FAAR platform (which features transverse rather than longitudinal engine mountings), so the M135i features the 302bhp 2.0-litre four-cylinder twin-turbo also to be used in the upcoming M235i Gran Coupe, driven through an eight-speed automatic gearbox. 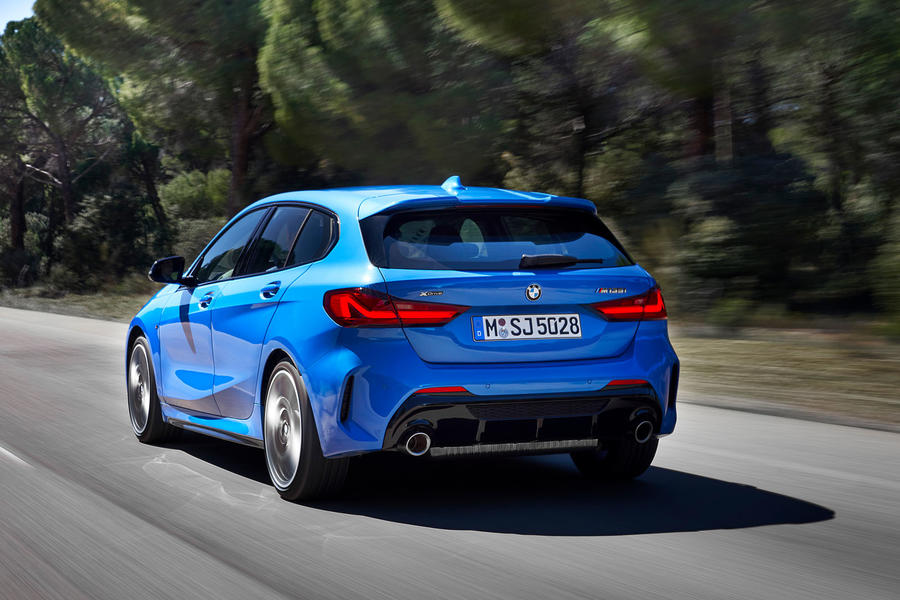 While the engine offers less power and torque – 332lb ft compared with 369lb ft – BMW insists it offers comparable real-world performance, helped by a chassis that is stiffer and 20kg lighter than before. It has a 0-62mph time of 4.8sec, just 0.2sec down on the previous model, and an equal limited top speed of 155mph. It matches the current Golf R Performance for power, while offering substantially more torque.

BMW has introduced a number of styling tweaks to make the M135i stand out from the rest of the 1 Series range, including a kidney grille featuring a motorsport-inspired mesh design. BMW has put considerable focus on the development of the 1 Series to ensure it retains a similar handling dynamic to the previous car. To aid this, the new one incorporates an actuator-controlled wheel slip limitation system (ARB), only previously used on the electric i3, as standard. It features a slip controller mounted directly on the engine control unit to reduce response times and works with the dynamic stability control (DSC) system to reduce understeer.

BMW’s Performance Control system is also fitted as standard, while all variants feature a multi-link rear axle and are fitted with a boomerang-shaped rear suspension strut to increase rigidity. The M135i also features extra bracing to further increase stiffness and a bespoke anti-roll bar. There is standard Sport suspension and aerodynamic tweaks too. 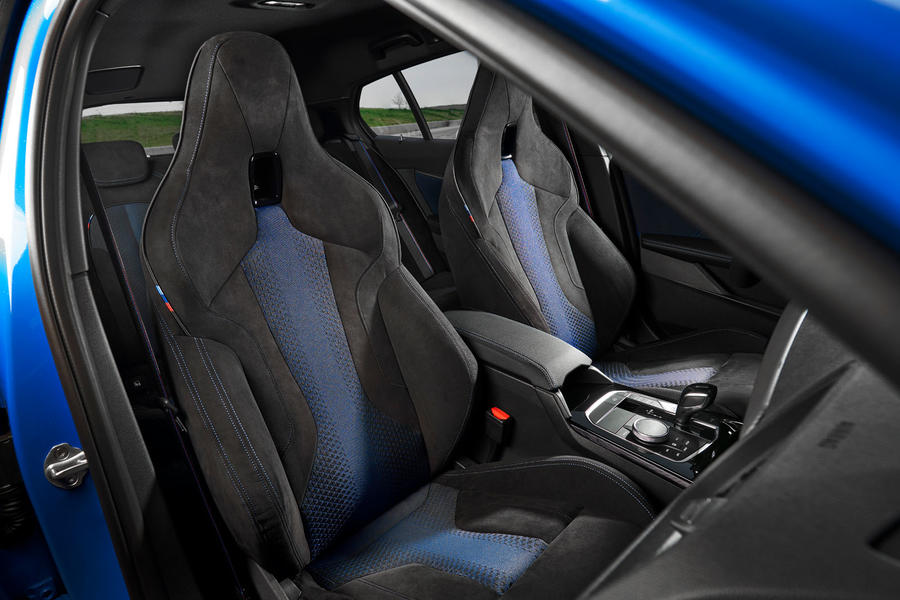 At launch, the wider 1 Series range will also include the 118i with a 138bhp 1.5-litre three-cylinder petrol engine, as well as the 116d, 118d and all-wheel-drive 120d xDrive diesels, ranging from 114bhp to 188bhp. Lower-end models get a six-speed manual or seven-speed automatic, with an eight-speed auto as standard on the 120d. While the 1 Series will launch with only petrol and diesel engines, the new platform can accommodate hybrid systems. Such versions have yet to be confirmed but are expected to be introduced later on.

Wheel sizes ranging from 16in to 19in will be offered (the M135i sits on 18in wheels), with three different suspension systems – standard, the lowered M Sport version and an adaptive system – available. The new 1 Series is 4319mm long, 5mm shorter than its predecessor, largely because the FAAR platform uses transverse engine mountings, while its 2670mm wheelbase has shrunk by 20mm. The car is 34mm wider (at 1799mm), though, and BMW says the new platform allows for more interior space. The firm claims there is an extra 33mm of knee room and up to 19mm of rear head room. The 380-litre boot is 20 litres larger than the old model’s, and BMW says access to the rear and boot is substantially improved by the new design.

The exterior design features a substantially larger grille, in keeping with BMW’s recent designs, while the side of the car is dominated by the traditional ‘Hofmeister kink’ at the C-pillar and two character lines on the main bodywork. Optional full LED headlights and tail-lights are available, with all models featuring LED daytime running lights. A panoramic sunroof can also be added as an option for the first time. 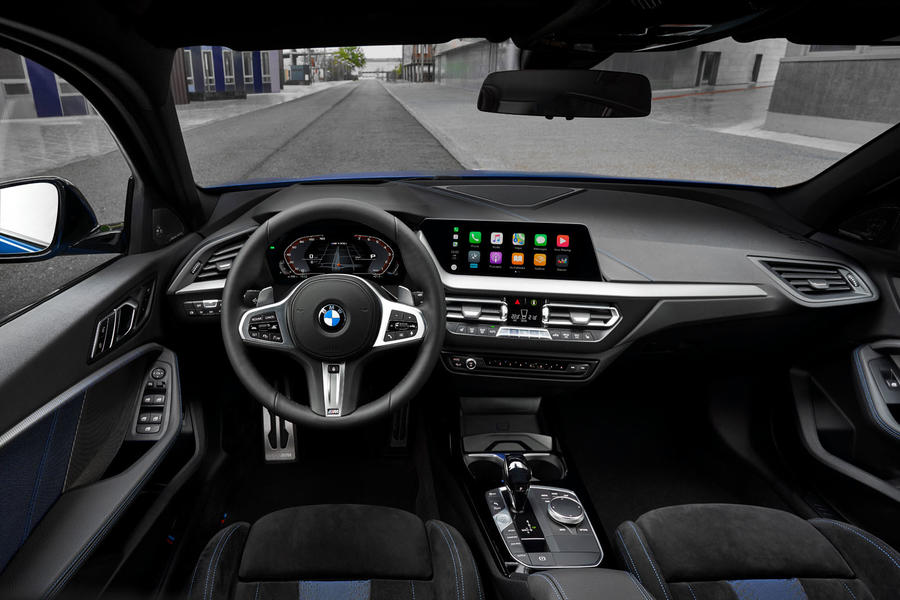 The interior has also been overhauled, with an 8.8in touchscreen as standard that works through gesture and voice control, incorporating BMW’s Intelligent Personal Assistant. Higher-end models get two 10.25in displays, with a digital instrument cluster and, offered for the first time, a colour headup display.

The interior also features distinctive ‘graining effects’ on the dashboard and door panels, with new coloured backlit trim strips. M Sport trim and the M135i feature an M Sport steering wheel and sport seats including an integrated head restraint. Four trim levels will be offered at launch, although the full UK options have yet to be finalised. 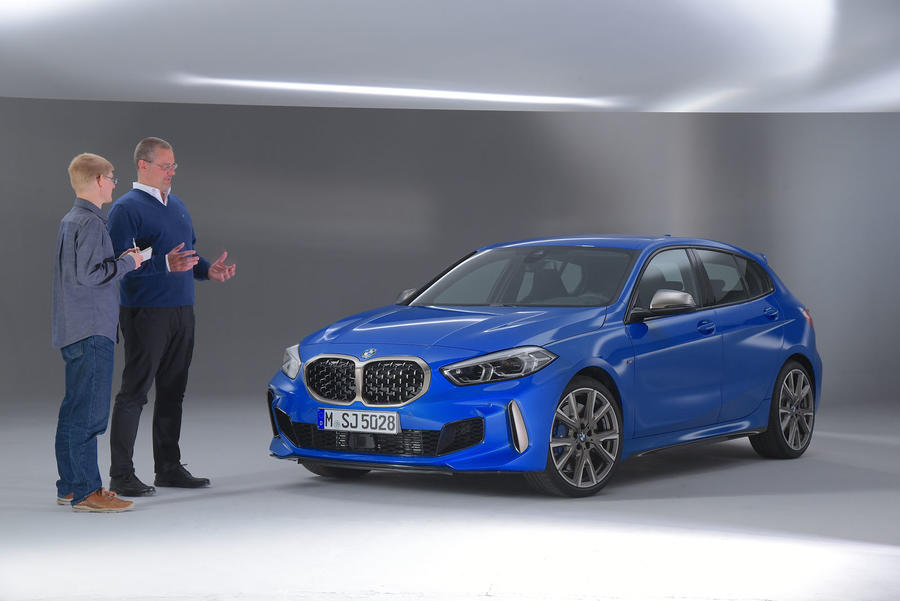 Q. Why switch to frontwheel drive?

A. “When we asked customers where they see room for improvement, interior size – seating comfort, rear seats, front seats, shoulder width – kept coming up. So when we had to decide on the architecture it was an easy decision, because front-wheel drive addressed exactly what customers have been complaining about.”

Q. Rear-wheel drive made the 1 Series unique in its class, so how will it stand out now?

A. “Customers loved the sporty design and driving dynamic, so this was something we had to keep. The major challenge was bringing out driving characteristics similar to a rear-drive car, and a lot of time, money and effort went into this process.”

Q. Why so much emphasis on technology in the interior?

A. “It’s important for younger customers, and the 1 Series has the youngest customers of any BMW model. Some of the technology, such as the reversing park assist, was only introduced a few months ago on our flagship models.”

Opinion: Front-wheel drive will give the BMW 1 Series better handling​

BMW lines up all-electric future for next-generation i8

They have worked hard to make that grille ugly.

The fused kidneys is not

The fused kidneys is not necessarily a bad thing, but in the context of the dumpy styling of rest of the car it is inexcuable.

Extending the black window trim to give the illusion of a slimmer C-pillar (which isn't over-thick in the first place) is an awkward meaningless gesture that is shared in the new 3 series.

The interior is as bland and banal as the extetrior, probably even worse.

I agree about the dreadful plastic filler panel on the C-pillar, similar to the new 1 Series.  It looks cheap and nasty, and is a dreadful way to handle the Hofmeister kink, which is now unrecognisable.

The window trim looks bad enough in black, it's going to look much worse in chrome where the extra cut line (between the rear door opening and the fixed fake panel) will be very obvious.

That front is not good looking

Car looks from the front like a deranged Sid from Ice Age. But then the modern BMW design language is ostentatious China-inspired shiny plastic business.

Jebus! What a sad little thing!

It highlights how clever the Focus, Corolla and 3 stylists are.

It'll be bought for the badge...

It’ll be bought for the badge, not the styling.

this was always the case for most buyers, at best it has always been awkward looking, only it also had rear wheel drive and a straight six for the enthusiasts.

Given the number of A classes I see on the road, which is only a griffin badge short of being an Astra styling wise, having a bang average, middle of the road product with a ‘premium’ badge clearly works for the masses. How the ‘premium’ manufacturer maintains their ‘premium’ status when producing average products may be a long term problem for them though.