BACK TO ALL NEWS
Currently reading: Audi confirms three new EVs by 2020
UP NEXT
New BMW M3 Touring due in 2022 to rival Audi RS4 Avant

Three e-tron models will join the Audi range within the next three years; the new A7 and A8 are on their way, too
Share
Close
Share story

The announcements were made at the brand's annual general meeting in Neckarsulm, Germany. The three models will all be launched within the next three years, after which Audi's core models will be gradually switched over to electric power. Audi aims for a third of its sales to be of fully or partially electric cars by 2025.

Five core models in Audi's portfolio will also be replaced within the next 12 months; these are likely to be the A1, A6, A7, A8, and Q3.

The A8 will be first to be revealed; we'll first see it at the Audi Summit in Barcelona on 11 July. The A8 will have electrified powertrains as standard.

Unlike today's A3 Sportback e-tron, which uses a version of the same powertrain used in Volkswagen's Passat GTE and Golf GTE models, these new models will be battery-electric vehicles, rather than plug-in hybrids, according to Audi.

This factors in with Audi's agreement to work with fellow Volkswagen Group brand Porsche on vehicle platforms, including those for EVs, meaning the new models could share their platform with the much-anticipated electric Porsche Mission E.

It also means that Audis could switch to rear-wheel drive; currently, its non-quattro cars have front-wheel drive.

Topics also covered at the meeting included Audi's aim to spearhead the Volkswagen Group's autonomous driving efforts. The brand aims to have a small series of city-based autonomous cars ready for production by 2021.

Another was MyAudi, Audi's online services platform. With this, Audi plans to rope in existing service providers to offer mobility services worldwide.

Opinion: the death of Audi's MLB platform is a good thing 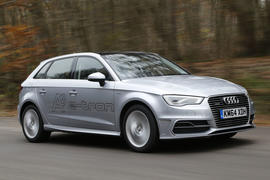 And Argos to sell hovering

1 June 2017
And Argos to sell hovering skateboards by 2021, really tell us when there is actually something you could buy in a showroom and can be test driven. Otherwise its all just VAG propaganda.

1 June 2017
Yet another story about a car that does not even exist. While the real story goes missing. Germany has finally questioned the larger diesel engines used in A7 etc. The high end Porsche uses the same engines not to mention the low end Volkswagen.

Is every second article about VW Group "plans"

2 June 2017
VW Group's Communications team sure are working hard trying to cover up the dieselgate story with positive spin.

VW Group's Communications team sure are working hard trying to cover up the dieselgate story with positive spin.

Just another symptom of the corporate arrogance that led to their unethical antics in the past. They think this tsunami of propaganda that Autocar seem keen to promote will make people forget. It won't, of course.