BACK TO ALL OPINION BLOGS
Currently reading: Opinion: the death of Audi's MLB platform is a good thing
UP NEXT
Opinion: Is stripped-down BMW M4 CSL worth the weight?

Opinion: the death of Audi's MLB platform is a good thing

The MLB platform and its predecessors forced engines to be mounted far forward, with negative impacts on handling. That could all change soon
Open gallery
Close

So it looks like farewell to Audi’s bizarre taste for overhanging engines.

If German press reports are true, which seems highly likely, bringing the future development of the MLB platform to an end signals a complete break with an engineering quirk that dates back to Audi’s roots in the Auto Union and NSU brands.

Audi’s traditional layout is a longitudinally mounted transmission positioned between the front wheels, with the engine mounted ahead of that. But while having the engine overhanging the front wheels might not have been a significant issue in the days of lightweight, small-capacity engines, it became much more of an issue from the 1980s onwards as engines got more powerful and heavier.

These natively developed Audis were for a long time roundly criticised for poor handling, poor steering feel and a nose-heavy ride - most of which was a direct consequence of having the mass of the engine in the extremity of the car’s nose.

For example, there might have been little to touch Audi’s prescient 1986 80 and 90 models, the build quality, craftsmanship and styling of which still stands today, but those heavy iron-block four and five-cylinder engines mounted in the nose were metaphorical boat anchors.

The 1994 A4 still had the same layout, but it had double wishbone suspension up front (highly unusual then for a front-drive car) and lighter V6 engines, rather than the huge in-line five-pot, and the result was far, far better. But in comparison to rear-drive BMW and Mercedes of the period, the Audi was, in terms of pure driving ability, still a long way behind class leaders. 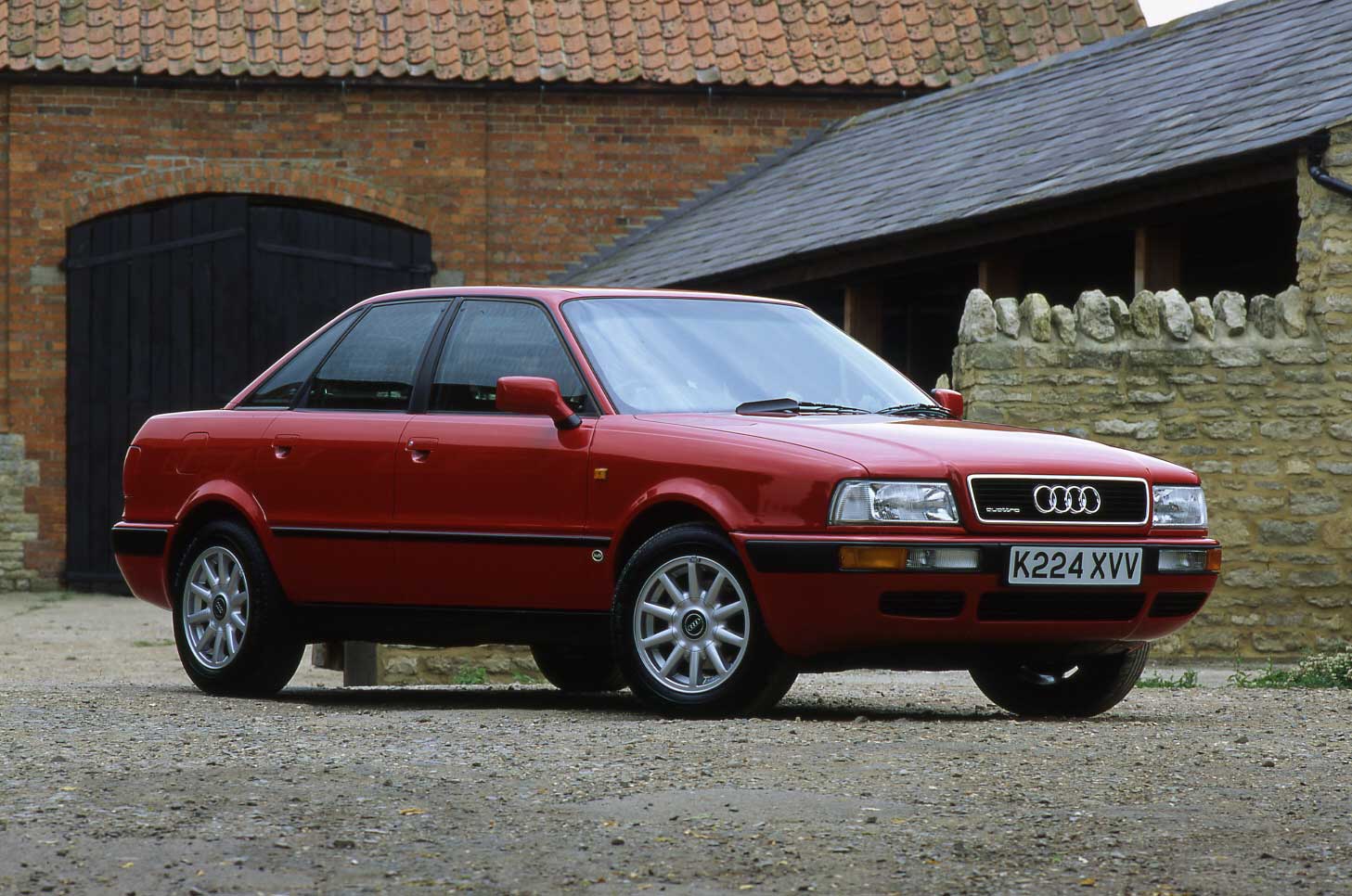 Over the past 20 years, Audi’s A4 and A6 and related models have been improved incrementally, but the brand has resisted dropping this oddball layout. The latest version of the longitudinal set-up benefited from a slight improvement in weight distribution but remained a fundamentally dud concept from another age in automotive engineering.

It did, however, have one massive advantage over more conventional layouts. The MLB’s predecessor platforms made building a proper, full-time, all-wheel drive system exceptionally easy.

Audi’s gearbox is mounted between the front wheels, so by driving each wheel through equal-length driveshafts it was easy to add a third driveshaft - exiting from the rear of the transmission casing - to drive the rear wheels.

But even the advantage of full-time all-wheel drive is about to be dropped. The MLB platform’s new fuel-saving quattro Ultra 4x4 system only works part-time, using predictive information from the car’s surroundings. It’s amazingly effective, however, and has in effect killed off MLB’s one main advantage.

Some of you will have already noted that Subaru uses the same layout as Audi’s MLB platform. That’s true, but the big difference is that Subaru uses flat-four boxer engines, which sit lower on the nose and are only two cylinders deep. Audi’s upright four-pot engine extends rather further into the nose.

The expected death of the MLB platform does have some significant upsides. I have no doubt that a 2021 A4 based on the MQB platform will be better than today’s (very pleasant ) MLB-based car.

But it also looks like the A6, A7 and next-but-one A8 will be based on Porsche’s MSB platform. Which means a rear-drive Audi is in prospect. Who could have ever expected that?

Its been a long time coming- I remember some years ago working in the Netherlands in winter and we had a fleet of VW passats. One bad winter we had a number of our cars end in in the canals. On looking under the bonnet we could see the problem- with all that weight at the front once a skid started you had no chance. We changed to Ford Mondeo problem solved.
405line 19 October 2016

I strongly suspect that audi have wanted to abandon FWD for quite some time I would have thought, finally they've found an excuse to ditch it without losing face. If there is one thing VW group are good at, it is peddling engineering myths.
Elmediterraneo 19 October 2016

I don't where to start.

I don't where to start.

The MLB platform is a link between all Volkswagen group brands.
There is no only the Audi A4 to A8 based on the MLB but also all the SUV's of the VW group with longitudinal mounted engines, including the Porsche's Cayenne and Macan, the 300K€ Bentayga and the upcoming Lamborghini Urus.
Killing that platform is killing the whole part-sharing strategy which took years to be implemented.

The MSS platform of the R8 has to be kept because that's a basis for Lamborghini too.

@Elmediterraneo - true but the new R8 is not selling that well and might not be replaced. Lambo will probably create a shared platform for the next Hurucan/Aventador - or share Porsche's upcoming mid-engined platform.
Elmediterraneo 19 October 2016

"Porsche upcoming mid-engine platform"
You talk about that 960 project which is surely cancelled due to the diesel scandal ?

You know Lamborghini had the L140 project since 90's but couldn't develop it.
When Audi bought Lamborghini they've finance the project which became the Gallardo in 2003.
Since that Audi took the opportunity to get a return on his investement and make a cheaper version of the Gallardo called the Audi R8.
I think the future of the R8 will be decided about what they're gonna do with Lamborghini, Porsche could keep his modern luxury VW Beetle known as the 911.