Aston Martin has used what would’ve been its Geneva motor show press conference to introduce future executive chairman Lawrence Stroll, alongside a host of new models.

Held instead at Aston’s headquarters in Gaydon, Warwickshire after the Geneva show was cancelled, the short conference stream saw Canadian billionaire Stroll make his first appearance alongside CEO Andy Palmer since he led a consortium to take a major stake in the British brand.

Introducing the conference, Stroll outlined the reasons for his investments, stating that the company has “the brand, products, engineering excellence and potential to become one of the world’s pre-eminent car manufacturers”.

He restated his aims to “reset the business plan”, starting by rebalancing supply to ensure dealer inventories are more in line with demand, and giving the firm the “financial security” to deliver crucial new models such as the DBX SUV.

Stroll also confirmed that Aston is “committed” to launching its long-mooted range of mid-engined cars, starting with the Valkyrie, continuing with the Valhalla and, eventually, also featuring a new Vanquish. Key to generating interest in this car will be Aston’s return to Formula One for the first time since 1960.

“We are bringing a lot more than money,” Stroll said.  “I have a long history in building luxury global brands in both private and public sectors. As executive chairman I will ultimately be responsible for the strategy we are implementing.

“The foundation of the strategy is returning Aston Martin to a works Formula One team on the grid for 2021. It is operating under its own brand allowing it to reach an audience of two billion and to engage and entertain our customers at 22 locations every year. It’s very exciting for all parties and should underpin the building of our brand globally and allow us to achieve our ambition that Aston Martin will become a pre-eminent luxury brand globally.”

Stroll claims these mid-engined cars will take technology from Aston’s works F1 team - although the Valkyrie and Valhalla were cars developed up until this point under Aston’s now dead partnership with Red Bull. F1 will have "a halo effect, a trickle-down effect" for the whole company, claims Stroll.

His interests lie firmly in making the most of the brand's racing heritage, citing the company's foundations in 1913, with the name stemming from founders Lionel Martin and Robert Bamford's bike racing experience up Aston Hill in Buckinghamshire.

During the conference, CEO Andy Palmer and chief creative office Marek Reichman also joined Stroll to introduce the new roofless V12 Speedster to the world, alongside the new Vantage Roadster and a Q by Aston Martin edition of the DBX.

Stroll’s consortium now owns 16.7% of Aston Martin, with the investment and a new rights issue giving the maker a £500 million cash boost at a vital time. 2019, described as a “very disappointing year” by Palmer, saw the firm issue a profit warning due to “challenging trading conditions”. Its stock price plummeted from the brand’s float in 2018, seeing it fall to around 20% of that value. 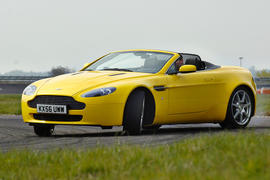 I've been an avid Aston fan for 56 years, since the day I was taken by my grandmother to see Goldfinger when it first came out.

Now I can afford one, but sadly (for me though maybe not them) I'm not lovin' any of their current or pipeline cars.

Beyond me why they didn't

Beyond me why they didn't look at their past history with rich "enthusiasts" buying into the company and, look at what Geely has done for Volvo and is doing with Lotus.
Cersai Lannister 4 March 2020

Beyond me why they didn't look at their past history with rich "enthusiasts" buying into the company and, look at what Geely has done for Volvo and is doing with Lotus.

That is true, Aston did well under Ford and all the other high-end brands except Ferrari sit within the bosom of a benevolent parent. I assume that Andy Palmer's ego made him want to enrichen himself and Aston by staying independent. The Welsh factory, at a time of Brexit uncertainty, was the ultimate folly.